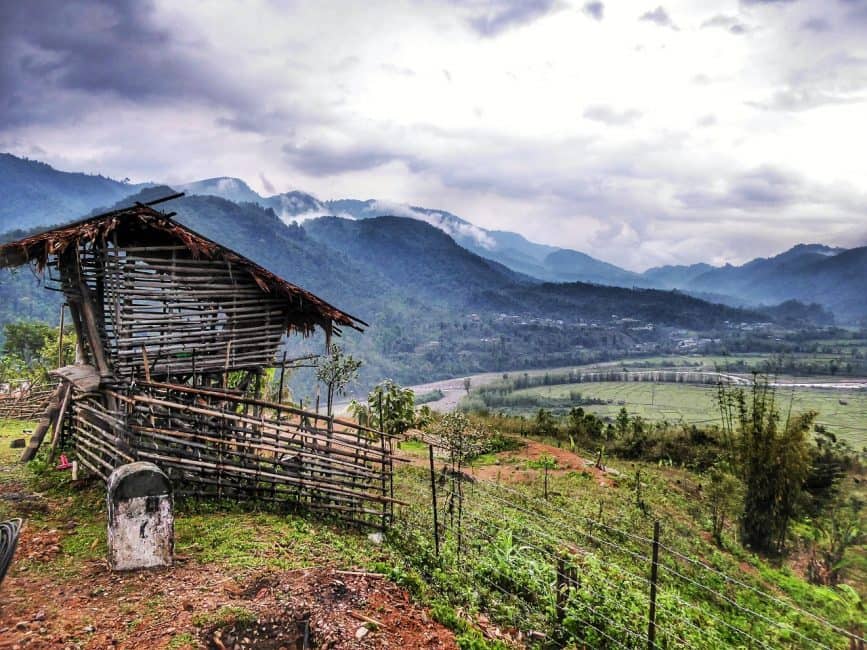 India is one of the world’s most exotic, fascinating and captivating travel destinations in the world. While the Taj Mahal, the forts and palaces of Rajasthan and the backwaters of Kerala are popular sights, very few travellers visit the remote, tribal lands of North East India.

North East India is tucked away in between Bangladesh, Tibet, Bhutan and Myanmar and is a world away from the chaos of Delhi and other tourist clichés you might expect when you think of India.

These diverse and beautiful, remote tribal lands are only just opening up to tourism and are home to some of the most intriguing tribal people, rare wildlife and stunning scenery in India.

Why you should visit North East India

The North East is still a relatively unexplored paradise for intrepid travellers.

Its popularity is growing and the region is quickly becoming India’s hottest new destination so to if you want to witness this region so blissfully untouched by tourism (so far) then you’ll have to visit soon!

1. Meet tribal people and learn about their unique way of life

Remote North East India has been cut off from the rest of the world for ages and so it’s one of the rare places in the world where you can meet authentic tribal people who live a very different way of life even in this modern age.

North East India is one of the most culturally diverse areas of the world.

It is home to over 200 tribes including unique, fascinating tribes like the opium smoking, headhunter tribes in Nagaland and the facially tattooed, sun and moon worshipping Apatani tribe in Ziro Valley, Arunachal Pradesh.

One of the best ways to experience the vibrant and unique cultures of North East India’s intriguing tribal people is through one of the many amazing tribal festivals.

Witnessing the riot of colour, music and dance and even some sacrifices and unique rituals of a traditional tribal festival in North East India is sure to be an unforgettable experience.

Don’t worry, they don’t practise head hunting anymore.   But it’s a fascinating experience to meet the tribal people and find out about their way of life.

It’s best to take a tour with a local guide if you want to be made to feel welcome and to really understand about their way of life.

Because the region is so unspoilt and unexplored North East India is a refuge to many rare and endangered animals.

There are many fantastic UNESCO listed national parks where animal lovers can take safaris and witness exotic animals in their natural habitat.

One of the most famous is Kaziranga National Park in Assam where close up sightings of engaged one horned rhinos are pretty much guaranteed (even the Duke and Duchess of Cambridge visited here on their India tour).

Manas Wildife Sanctuary, also in Assam, is home to more endangered species than any other sanctuary in India.

Or visit Nokrek National Park in Meghalaya to look out for red pandas, tigers, elephants, rare breeds of macaques and marbled cats.

North East India is nestled up against the border of Tibet and parts of the mountainous state of Arunachal Pradesh actually used to be part of Tibet.

You will experience the enchanting, serene and colourful Tibetan culture and religion carrying on peacefully in the historic monasteries, prayer wheels and stupas.

Be sure to enjoy delicious and authentic Tibetan food like momos and thukpas.

North East India is home to some of the most stunning, diverse and unspoilt scenery in India.

From the snow capped peaks of the soaring Himalayan mountains, to the grassy plains of Assam and the steamy forests and majestic waterfalls of Meghalaya – North East India showcases unspoilt nature at its finest!

5. Experience a totally different and hassle free side to India

If the horror stories of dirt, hassle and chaos put you off visiting India at all then, exploring North East India offers you the chance to experience a totally different side to India.

See how to travel in India with these Train Travel Tips

Even though a lack of infrastructure makes traveling here a little bumpy and slow moving at times, I found North East India a welcome escape from other parts of India.

The chaos and hassle that you get in the more touristy parts of India disappears in the North East.

No one tried to cheat me or touch me or even sell me anything.

The people of North East India where some of the friendliest and most genuine people I’ve ever met on my travel.

6. Get off the beaten track

In this increasingly globalised world it can be pretty hard to really ‘get off the beaten track’ nowadays.

As the region has only just started to open up to tourism, restrictions on travel and permit requirements are becoming more relaxed but the region remains blissfully untouched by tourism and unexplored.

In fact some parts of the mountains in Arunachal Pradesh have not even been mapped!

‘Yes, this means that traveling here can be a bit bumpy and there’s no luxury hotels but if an adventure is what you’re after than North East India is the place to come!

There aren’t many places in the world with blank spaces on the map.

There aren’t many places where people have hardly any idea that the modern world exists, where creatures have yet to be named and mountains yet to be climbed.

But North East India is still totally off the beaten track. It’s an amazing feeling to go somewhere hardly anyone else has gone but you’ll need to go now before everyone else does!

But North East India is an amazing and unique destination that’s totally worth the extra effort, after all isn’t that the meaning of ‘off the beaten track!’

A Feast to Remember in Papua New Guinea

7 Things to do in Rishikesh

Anna has been on an indefinite journey around Australia, South East Asia and India ever since traveling slow, independently and on a budget. She fell in love with India and is now based there in Goa. She shares her tips and experiences for traveling and working abroad on her blog Global Gallivanting to inspire others to travel full time too.