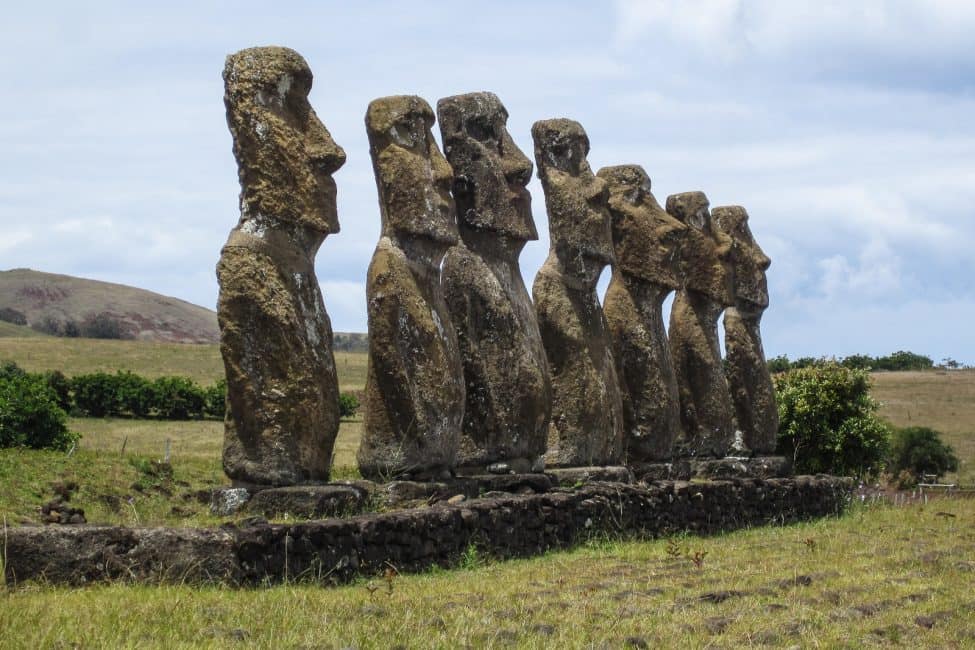 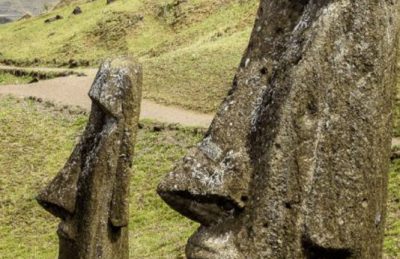 In the Southern Pacific Ocean, a remote volcanic island looms out of the sea with giant stone statues. The Easter Island Statues.

So who put these giant stone heads on Easter Island and what was their purpose?

Mark is on the trip of a lifetime to discover where this isolated civilization came from and where they went.

When you first see a Moai statue you are drawn to its disproportionately large head (compared to body length) and that is why they are commonly called “Easter Island Heads”.

But once you appreciate the size and scale of these massive stone sculptures you begin to wonder;

Who put them here? What purpose do they have? How did they transport them across?

How to Get to Easter Island

The only way to get to Rapa Nui is by plane.

LATAM Airways (formerly LAN) operates flights from Santiago (Chile), and it is a 5-hour flight across the Pacific Ocean.

Stepping foot on the island you will find most accommodation offerings in Hanga Roa, a short drive from the airport.

Hanga Roa is the only town on the island and you will find that public transport is non-existent here.

How to Get Around

The best option for getting around is to hire a car, and you can arrange this with most hotels or guesthouse owners.

I strongly recommend this as opposed to a tour bus; after all, this is one of the most remote islands in the world.

I find that sense of remoteness central to the Easter Island travel experience.

Once you’ve got your vehicle, collect a map from the ranger station (along with the park entrance fee) and the whole island is laid before you to explore.

I chose to drive anticlockwise, heading east along the southern coast road.

You can easily circumnavigate the whole island in a day. You can view my Easter Island map here.

Rano Raraku is known as the “nursery” of the stone head Moai statues.

As you approach the site from the road you will begin to see the giant heads dotted along the hillside.

Look closer and you will find examples of  Moai at each stage of development; much like a manufacturing line.

There are statues only partially carved out of the slopes of this volcanic crater, and others fully complete ready for transport to their final destinations.

All but 53 of the 887 Moai statues were carved from this tuff (compressed volcanic ash).

The mind boggles that humans from a stone-age civilization could carve such massive statues from rock and transport them around the island, one thousand years ago.

A stunning archaeological discovery was made in May 2012, where archaeologists excavated around the statues to discover the Easter Island heads have bodies!

You can climb to the top of the crater from where you will get an almost 360-degree panorama of the island.

A short drive away and you will arrive at Ahu Tongariki, which is the most photogenic of the statue sites.

You will notice that the statues here all have their backs to the sea; they’re all facing inland.

So who put the statues Here?

It was the Rapa Nui people, Polynesians who sailed here from other pacific islands.

Although other theories suggest that they could have arrived from South America.

The colonization of Easter Island began around 1000AD, although dates differ from archaeological evidence versus radio carbon dating.

What purpose do the statues of Easter island Have?

Archaeologists suggest that the statues were a representation of the Polynesian people’s ancestors.

The Moai statues face away from the sea and towards the villages, by way of watching over the people.

So here at Ahu Tongariki these Moai look over a flat village site.  But not all Moai face inland, and we’ll get to an example of this later on our journey around Rapa Nui.

“Pukao” are the hat-like features or topknots which are on top of some statues.

They were made from a quarried red volcanic stone.

These are actually later additions to the statues, possibly as late as the 16th century.

The reason for these hat-like additions is not known but some theories suggest it gave the statue an expression of power.

The “Top Knot” reflects a male hairstyle which was common on Rapa Nui. These have been re-erected here at Ahu Tongariki.

You might think the statues here at Ahu Tongariki have stood here since they were originally erected, but they have an interesting story to tell; All of the Moai here were toppled over during the island’s civil war.

And later in the twentieth century a tsunami hit the coastline and swept them inland.

The “statue-toppling” occurred in the 1750s by tribes locked in civil war.

Historians know roughly when the toppling took place because in the 1700’s the first European visitors reported seeing only standing statues, but then by Captain James Cook’s visit in 1774 many were reported toppled.

Continuing our circumnavigation of the island, takes us west along the north shoreline to Anakena beach.

This white-sand beach flanked with swaying palm trees is one of my favourite beaches in the world; Rugged, remote and restful.

The focus of your attention as you walk down to the beach is Ahu Nau Nau, a group of 7 Moai silhouetted in front of the calm turquoise waters of this secluded bay.

Venturing towards the west coast now, we arrive at Ahu Akivi, which is unique because these Moai are the only ones to all face towards the sea, although it does overlook a village site too.

A theory suggests these Moai looking out to sea are to help travelers find the island.

Just close to here is Ana TePahu, which once was a cave-dwelling.

Access has now been restricted because of the risk of collapse, so I was fortunate to visit it before the restriction.

This cave is actually a lava channel, formed from the volcanic eruptions that led to the creation of Easter Island.

This lava tube runs the length of 7km.

You may have noticed that most Moai statues have just plain faces.

Some we learned have the “Pukao” topknot hats.

But interestingly a discovery was made from broken fragments of coral found at many of the Moai sites.

Archaeologists reassembled these fragments to form these white coral eyes with black or red coloured pupils.

These fit into the eye sockets designed for this purpose.

How did they transport the statues around the island?

The answer is no one really knows. There are various theories that revolve around the use of wooden rollers or sledges and ropes to pull the statues along.

Google “easter island aliens” and there are some interesting theories of alien spaceships transporting the statues!

Finally, no visit to Easter Island would be complete without visiting the volcanic crater at Rano Kau.

The Orongo Ceremonial Village,  sits on the slopes of this extinct volcano crater. The stone dwellings here are from the “Birdman” era.

The annual Birdman competition (Tangata Manu) was held here. Competitors had to climb down the cliffs and swim out to the small island at Motu Nui.

They would have to collect a fresh egg from the manutara bird and then swim back and climb the cliffs to the village.

The winner of the competition was the first person to return with an intact egg. This winner would then become the King for the year.

Easter Island as an example of human frailty?

Could the vulnerability of Humanity be expressed through the history of Easter Island?

Here we have a remote civilization that overexploited their natural resources to destruction, as one theory suggests.

However, another theory suggests that the arrival of the European settlers introduced disease and slavery, bringing about their downfall.

I’m inclined to believe the second of these theories. Professor Stephen Hawking said this about the downfall of civilizations:

“If you look at history, encounters between civilizations with advanced versus primitive technologies have gone badly for the less advanced.”

For more about Chile, read Why Chile is the perfect adventure travel destination.

Do you have a question about flying you’ve always wanted to ask an airline pilot?

Things to do in Peru

About Flying and Travel

Mark is an Airline Pilot who is on a mission to inspire and inform you about his two passions; Flying and Travel.  He is here to help you travel the world with inspiring destinations and expert flying and travel tips.