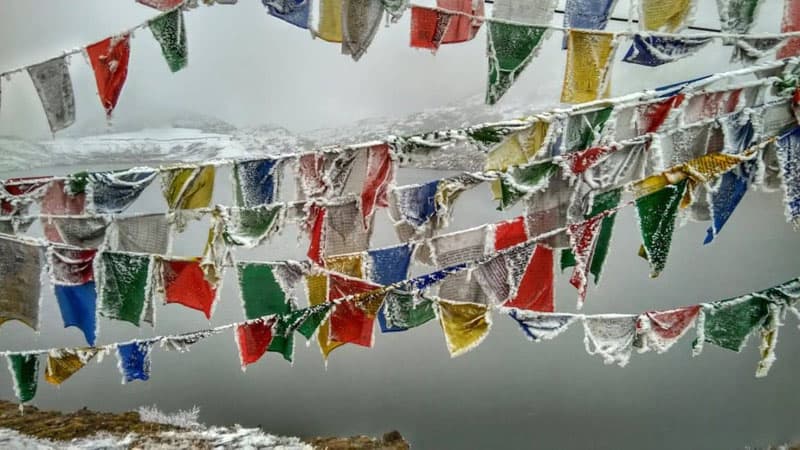 Rachel Jones of Hippie in Heels shares the very best reasons to travel to Arunachal Pradesh in Northeast India.

Northeast India is a region that was lesser traveled in India for a variety of reasons including poor infrastructure, safety concerns, and being hard to reach.

All of that is changing as tourism in the Northeast is starting to come alive, hotels are popping up, and roads are being built.

There are 7 states here and Arunachal Pradesh, Nagaland, and Assam are the most popular. 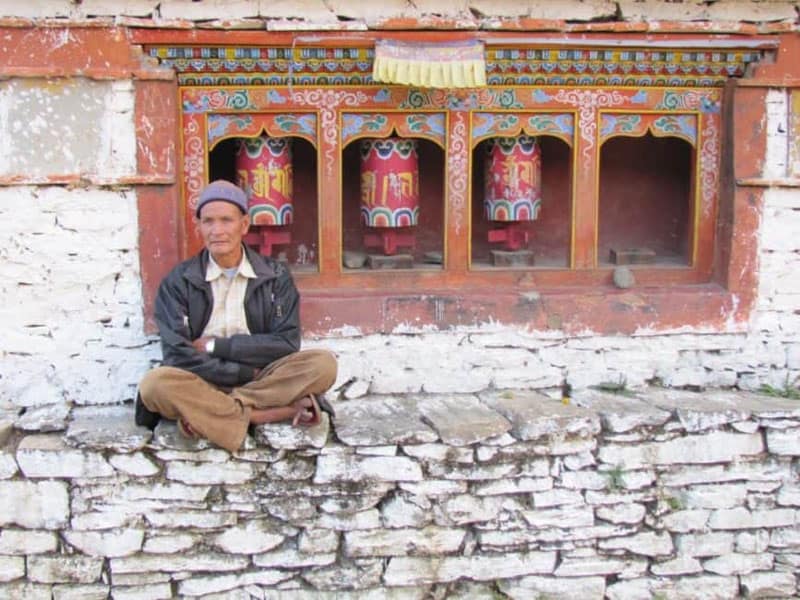 In terms of location, NE India is not just Calcutta or Darjeeling, but is actually much further away, all the way on the other side of Bangladesh bordering Bhutan and China. On a map, you wouldn’t think it was part of India at all.

When I first came to India, 4 years ago, there wasn’t even much information on it in Lonely Planet. Guidebooks cautioned people not to travel to this area at all. At this point, not all 7 are safe to visit.

“Arunachal Pradesh is my favorite state here, and it is very different from the rest of India.” 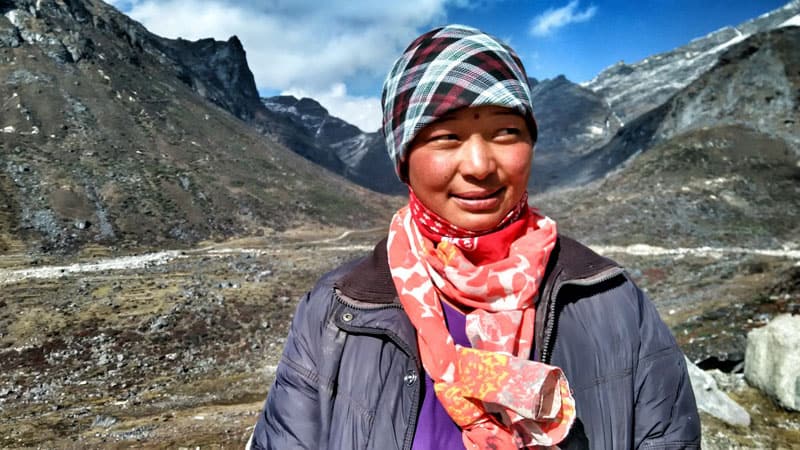 One of the locals

There are many tribes in NE India who used to fight (there were even headhunter tribes or cannibals).

They were hard to govern, or that is how the Indian government explained it and often forgotten. Up until recently, there were many places here who hadn’t seen a tourist before and didn’t have real roads reaching them.

Also read: Tips for Traveling by Train in India

There are many reasons to visit this region of the world and now is the time to do it as tourism is just beginning for people outside India.

You do need permits to visit the “Seven Sister States” here in NE India and permits are different for each state. The tour group Holiday Scout is who I went through to tour this region and Arunachal Pradesh, and I can personally vouch for them. 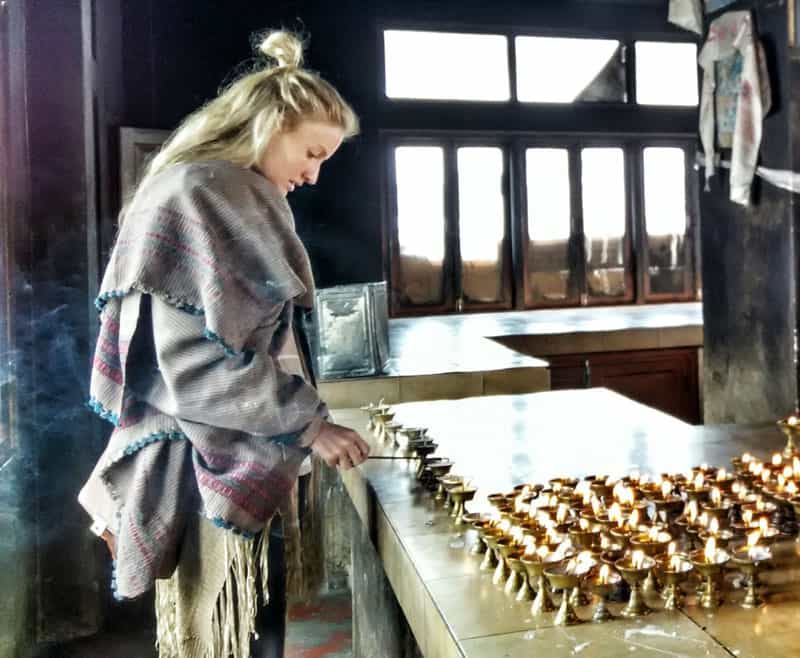 Arunachal Pradesh is my favorite state here, and it is very different from the rest of India. If you were just dropped in here without knowing where you were, you would think you were in Tibet.

The people are mostly Tibetan in heritage, but from different tribes and eat, speak, and worship like Tibetan people.

5 Experiences to love in Arunachal Pradesh

Tawang Monastery is one of the best cultural experiences not only in Arunachal Pradesh but in all of India. While you’re in Tawang, you are just 30 km from both Bhutan and China.

Tibetan Buddhism (and even saying the Dalai Lama’s name) is illegal in China, so here you can see the people worship in peace and speak their local language.

Many Tibetans had to flee to India to places like Arunachal, Dharamsala, and even South in the jungles of Bylakuppe. Tawang is also

Many Tibetans had to flee to India to places like Arunachal, Dharamsala, and even South in the jungles of Bylakuppe. Tawang is also incredibly high up in the mountains and the drive itself is an adventure.

2. Hang with monks in Bomdila

Less than 10,000 people live in this highly elevated town. There are many tribes, like the Monpa and Aka.

You have to pass through Bomdila to reach Tawang and many people don’t stop… but you should! There are only two hotels here and the people are so kind to strangers passing through.

Visiting the local markets and the Bomdila (GRL) monastery are the top things to do in Bomdila.

See a mandala in person and if you’re lucky, ask around for the fortune telling monk (good luck!)

3. Eat ALL the momos 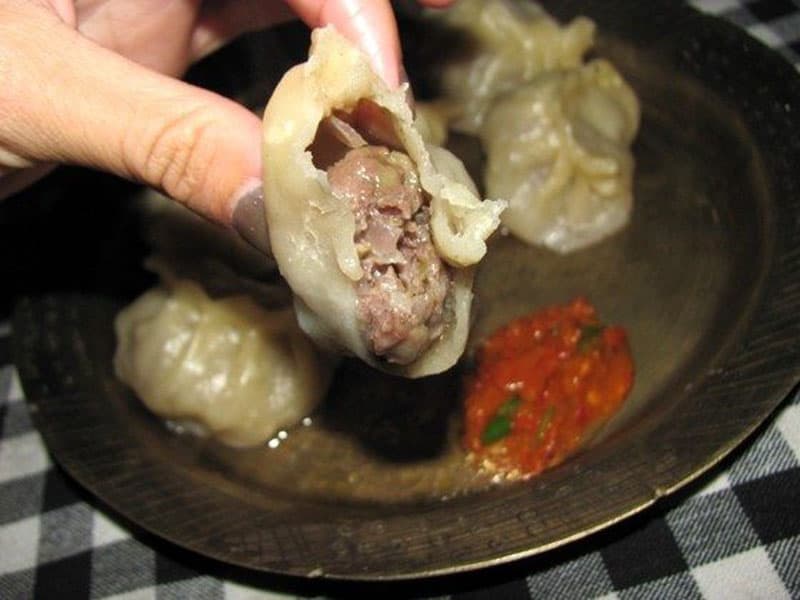 Tibet is in the blood of many people here in Arunachal Pradesh and that means MOMOS! These are the greatest invention of all the foods, of all time. 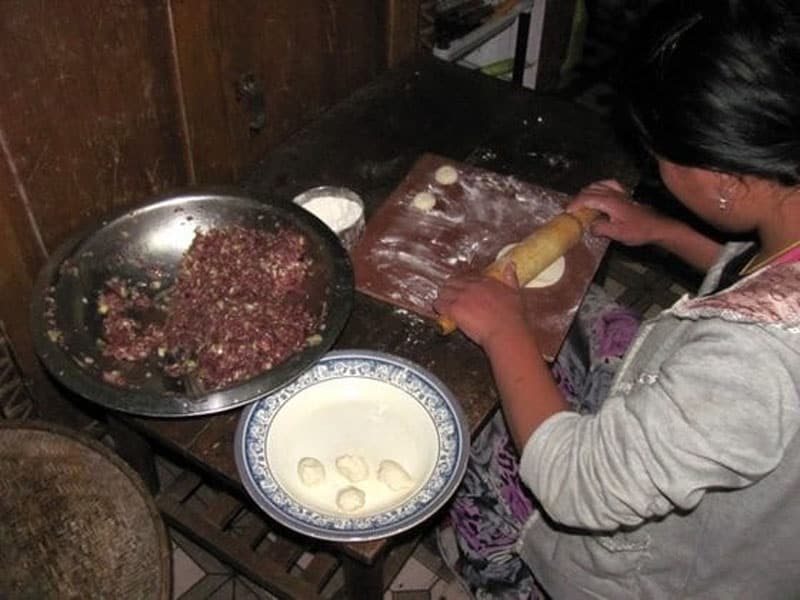 Steamed or fried, plain or with chili sauce, you can’t go wrong. 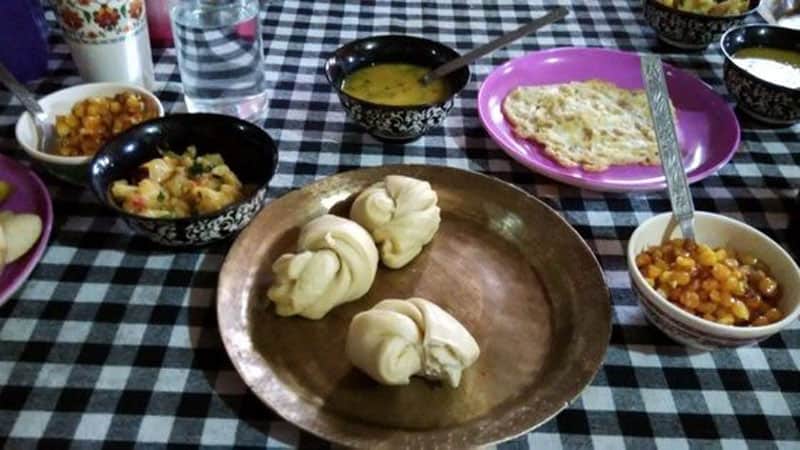 Ask to try momoloco, the Tibetan bread, and Thupka a Tibetan noodle soup. You are not going to do well here if you’re on a diet.

4. Staying in homestays with local people

There are few hotels here and they aren’t what you might be used to. 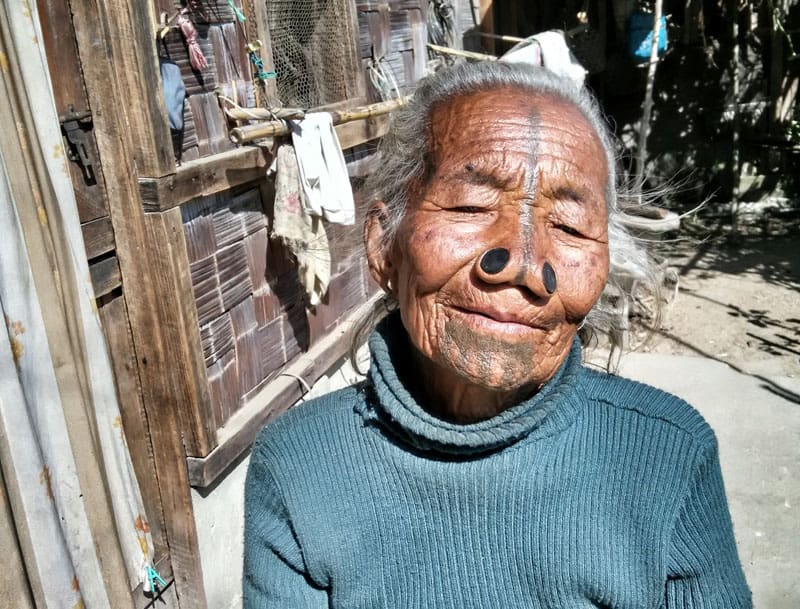 A homestay is a great experience

You can request things like a boiled kettle of water to add to your shower bucket, or a space heater you can only leave on a few hours (or die from the fumes apparently).

But what’s better? Staying at a homestay. Sleeping next to a fire with a local family.

Eating dinner with your mom for the day instead of ordering room service. Learning how to make momos.

All the personal touches are worth taking a cold bucket bath in their outhouse in -5 degree temperatures because after you can cuddle up with their big blankets and cuddle one of the many cats!

I have saved the best of Arunachal Pradesh for last! Ziro Valley is home to the Apatani tribe and you can meet them. 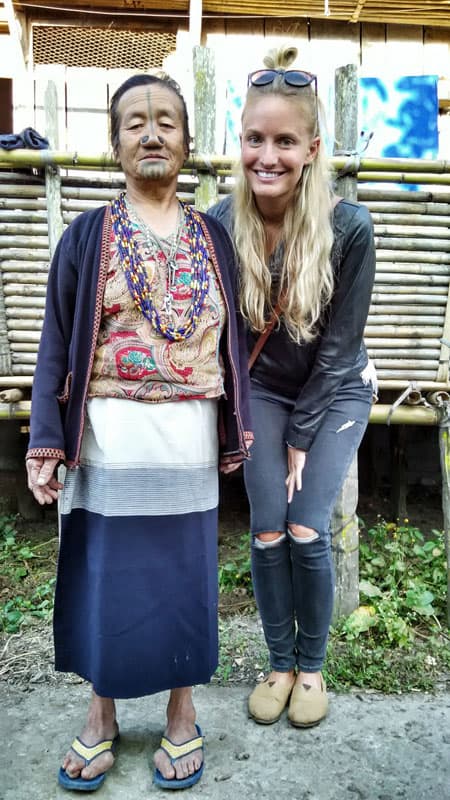 They worship the sun and moon, give animal sacrifices, and have facial tattoos and nose plugs. You can stay with them in their home or just go for the day.

Lunch was chicken and egg stuffed in a bamboo stick, cooked over a fire in the kitchen/living room/bedroom.

They want to be a UNESCO site and are on track for it. Because of that, they know tourism is important and are very open to people visiting.

Many things they did are not illegal and when these people die, their kids will not continue their customs.

In fact, the young kids here speak Korean, have Korean style hair and listen to K-pop!

Skinny jeans and highlighted hair are taking over, but rats are still barbecued over the fire for dinner and Mithun sacrifices are still made.

You’ll never see anything like that anywhere else in the world. 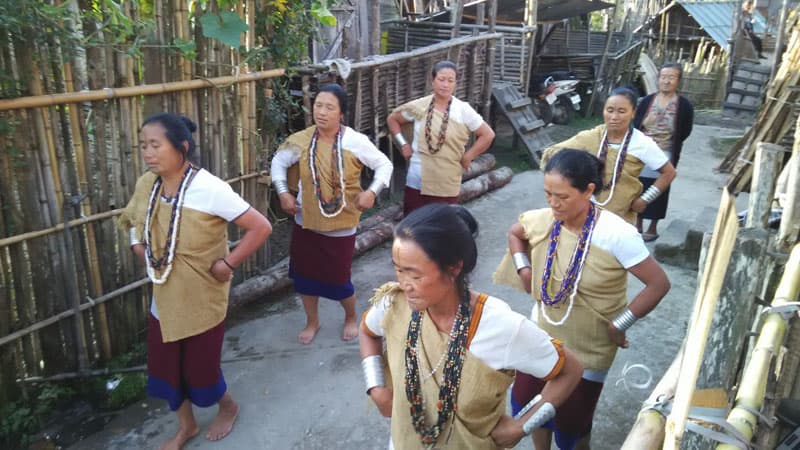 This is one of my favorite places

When traveling in Arunachal Pradesh, there are some difficulties to note such as no heat in most hotels, no showers (cold buckets only), “interesting” toilet situations, and long stretches of bumpy, winding driving.

But it worth the visit. You should go to Arunachal Predesh now before the whole world finds out about it!

I hope that you will add this to your India bucket list, as it’s one of my favorite places in the world!

Rachel Jones is an American who left a career in nursing to live on the beaches in Goa India over 3 years ago. Her website gives advice on the 35 countries she’s been to and has become the go-to site on India travel. 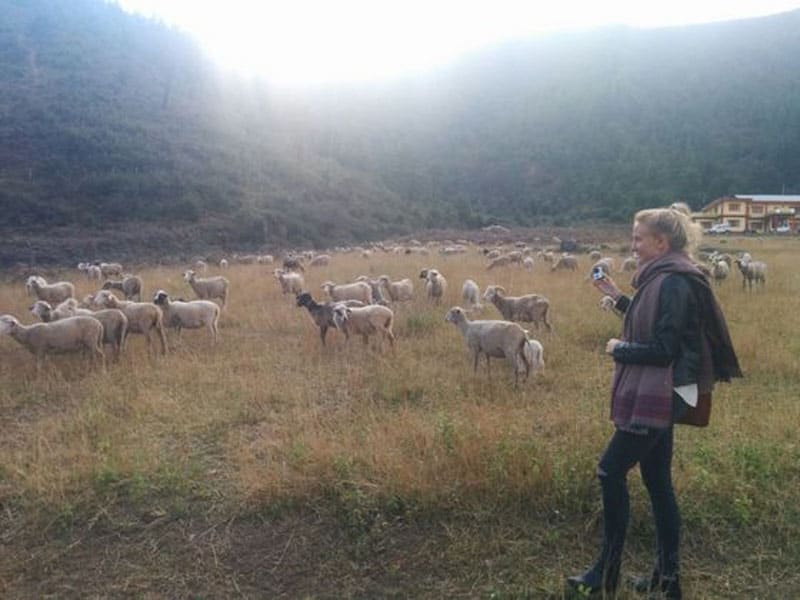 The blog, like it’s name, is a contradiction combining off-beat adventurous places with glamorous and girly travel. Hippie in Heels has been featured in ELLE, Thomas Cook, & Grazia UK magazines & was voted by Flipkey one of the top 25 female bloggers to follow this year.

She’s a writer for Bravo TV.

How I Entered Nepal from India On a Budget In Style