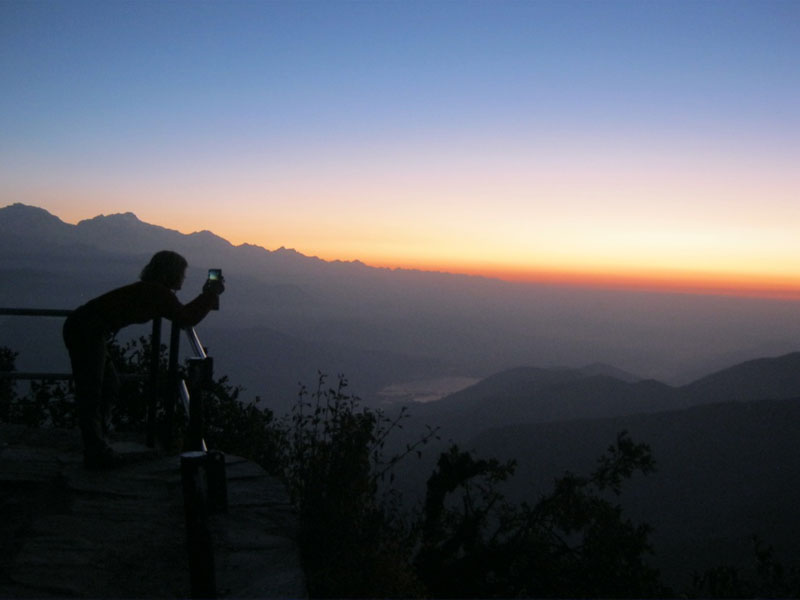 When I first decided I wanted to see Nepal, I didn’t have much money. But I still wanted to do it. The only solution was to make it on a tiny budget. And that’s what I did. I ended up entering Nepal from India. Not what I initially had in mind.

How I Entered Nepal from India in Style

I hit the first snag even before I left. There were no cheap flights from Europe to Kathmandu, Nepal. But I still wanted to do it. I bought a cheap one way flight to New Delhi, India and decided I would make it to Nepal on land.

I managed to catch a local bus to downtown and survived my first few days in the city.

When I was checking public transportation options for going to Nepal, somebody said, “Why don’t you go to Agra first? It is close and it would be shame to miss it.” I agreed and bought a morning train ticket to Agra.

I spent a day in Agra, visited Taj Mahal and had hundreds of pictures taken of me posing with Indian families, their babies, school kids, and young guys.

I didn’t enjoy my sudden popularity and looked forward to leaving for Nepal.

I bought another train ticket – this time for an overnight train from Agra to Gorakhpur.

Agra to Gorakhpur by Train

It would have been an ordeal, but I spent my 14 hours sleeping, eating horrible train food and chatting with a nice Indian family of four and a group of pilgrims traveling to the temple in Northern India.

I thought I was doing great until I got off at Gorakhpur.

I assumed I would just get off the train and find some information center where somebody would direct me to the bus to Nepali border.

What a naive idea! I got off into typical chaos of Indian train station where thousands of people wait, sleep, eat, work, sell, buy and basically live.

My popularity dropped as suddenly as it had risen before.

In the Gorakhpur hustle and bustle, I attracted virtually no attention.

I helplessly wondered through the crowds asking everybody who was kind enough to notice me. Somehow, I managed to find a bus to Sunauli. By that time, it was already getting late.

My original plan was to get to the border before sunset and catch an overnight bus to Pokhara, Nepal.

While I was bumping along in a bus full of Indian villagers and a few chickens, I realized I wouldn’t make it to Nepal before sunset.

To my surprise, the bus dropped me off in a village about a mile before the border.

I had to make it to Nepal on foot.

I thought it was pretty spectacular entry – me walking in the middle of the road with a huge backpack. I wished somebody just called me and asked what I was doing. “Sorry, I am busy right now….”

When I hit the Indian border, it was already dark; completely dark, since there was a power blackout. The Indian officers checked my passport and sent me over to Nepal.

For some reason, I felt a big relief I had finally made it to Nepal.

I stopped at the immigration office to buy my visa. I handed my hundred dollar bill to the officer before he realized I hadn’t had my passport stamped while leaving India. I wondered how come the Indian officers had not told me.

If it is dark, nobody can see them taking money.”

Then he told me to leave my backpack and the hundred dollars with him and walk back to India to get my passport stamped.

I look hesitant so he added: “Don’t worry; you are not in India anymore.” So I did as he said.

With my paperwork done, I started looking for a bus to Pokhara. Of course, there was none.

All buses had left in the morning. With my ridiculous budget in mind, I seriously considered spending the night outside.

Then I remembered the bad reputation of border cities and opted for the cheapest “guesthouse” I could find.

The reception was a big bar full of local liquor.

I turned down the offer of a Nepali regular who reasoned we should share the room so that I could get it cheaper.

When he wasn’t successful he at least promised he would come at 5am to wake me up for my bus.

I didn’t believe he would but still double checked my door was locked.

My Night at the Border

The night was rather noisy with both male and female voices shouting at the bar.

And there he was – at five in the morning, my rejected friend was banging on my door and yelling I better get up so that I don’t miss my bus.

Thank you for free wake-up service, it comes with the room.

When I finally boarded my bus for the ride to Pokhara, I immediately fell in love with Nepal. It felt so peaceful and easygoing compared to India!

I guess I lived through my biggest cultural shock in Delhi and after that, Nepal was a breeze.

Nevertheless, I wouldn’t dare to recommend my itinerary to any fellow travelers.

I was cautious but also extremely fortunate that I made it out only with funny stories and pleasant memories. Since then, I am older and even more cautious.

I have learned my lessons.

So if you decide to travel to Nepal my way, here is my list of “Don’ts” or rather “Nevers”:

When I see this list above, I cannot believe I actually did every single one of these things. Not very smart.

I survived and promised next time I would be more careful. After all, there are other adventurous options how to enter Nepal in style.

This was posted by Eve of MyRealNepal.com who no longer blogs.

Tips for Trekking to Everest Base Camp