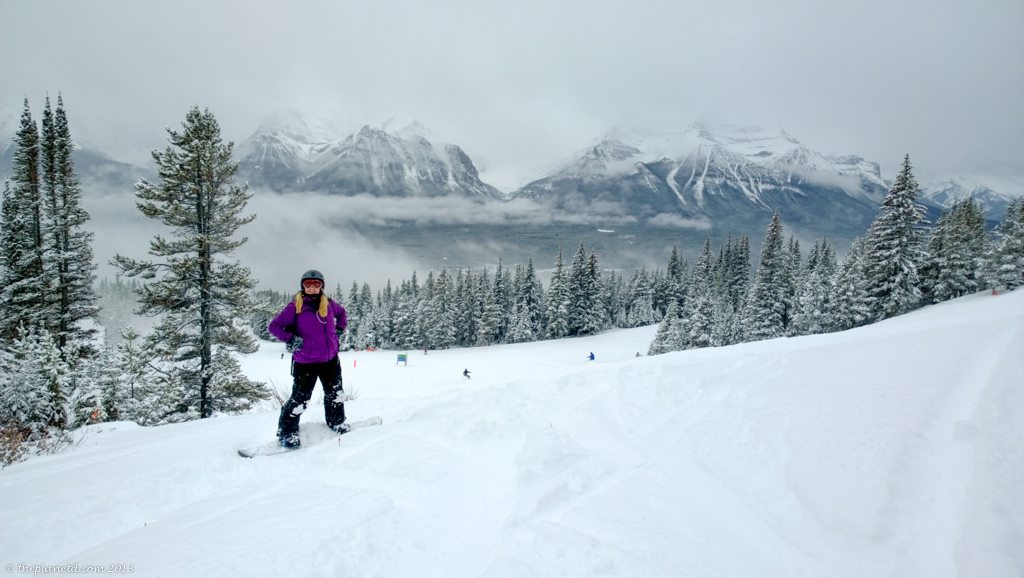 Can you believe we've never been snowboarding in Lake Louise? It's one of the premiere ski destinations in North America and it's taken us this long to get here. But let me tell you, it was worth that wait! 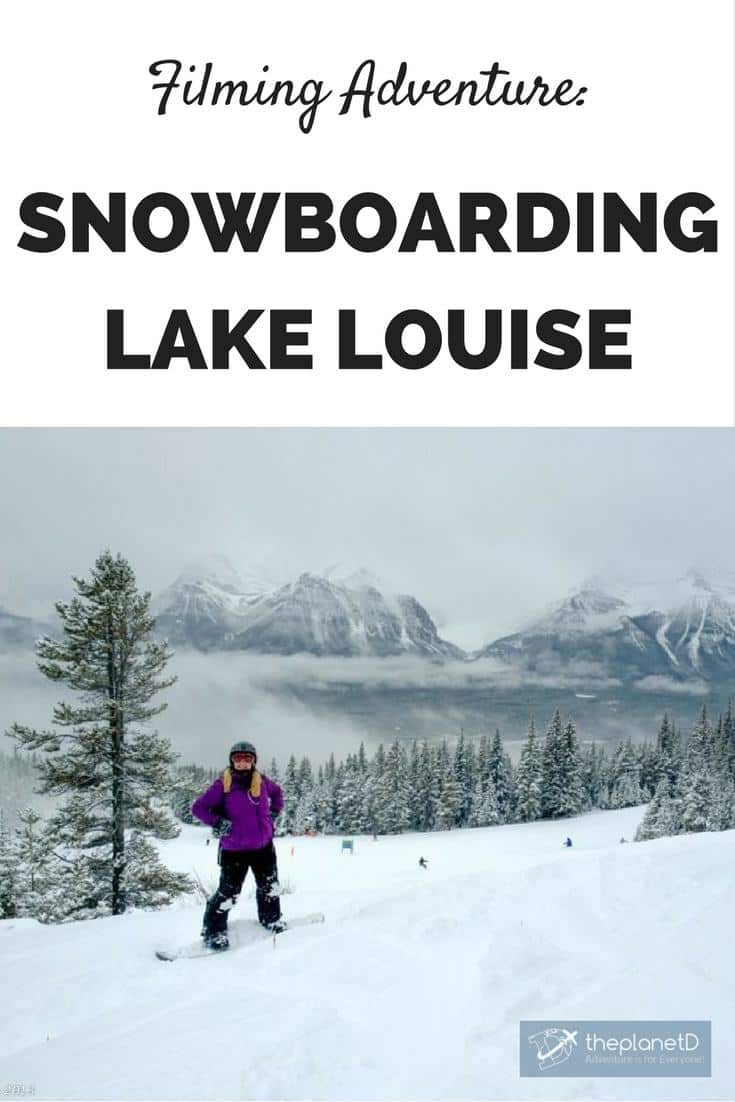 We love snowboarding in Canada, but we love to ham it up for the camera even more. So while visiting Alberta this winter, we had the best of both worlds. As we frolicked through Banff and Canmore, we were followed by the fabulous film crew from Joe Media. They captured our every move on camera as we played in the ice and snow. Our first stop was Lake Louise for a little snowboarding fun. 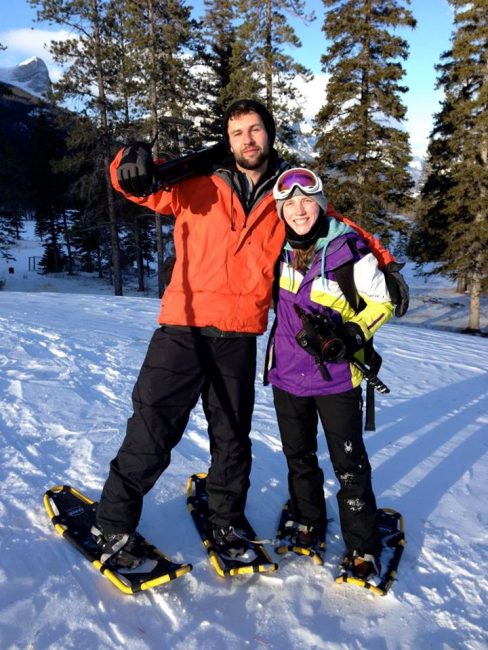 It was so exciting to pull up to Deer Lodge in Lake Louise, settle in to our room and get ready for our adventure ahead. We were spending 3 days in Lake Louise and two of them were snowboarding. Deer Lodge is a traditional log structure that is exactly where we'd want to be based when on a ski vacation. Much of the original log cabin is still in place with a grand timber sitting room surrounding a giant fire places and there are even pianos scattered throughout the building. It's a rustic mountain cabin that you can lose yourself as you relax and look out at the Victoria Glacier.

We had an amazing dinner in their Caribou Lodge sampling the Rocky Mountain Cuisine while our director Riley and his assistant Justine filmed us sampling the Elk, Alberta Beef and Smoked Buffalo. I'm not one to normally go for game, but it as they say, “When in Rome.” 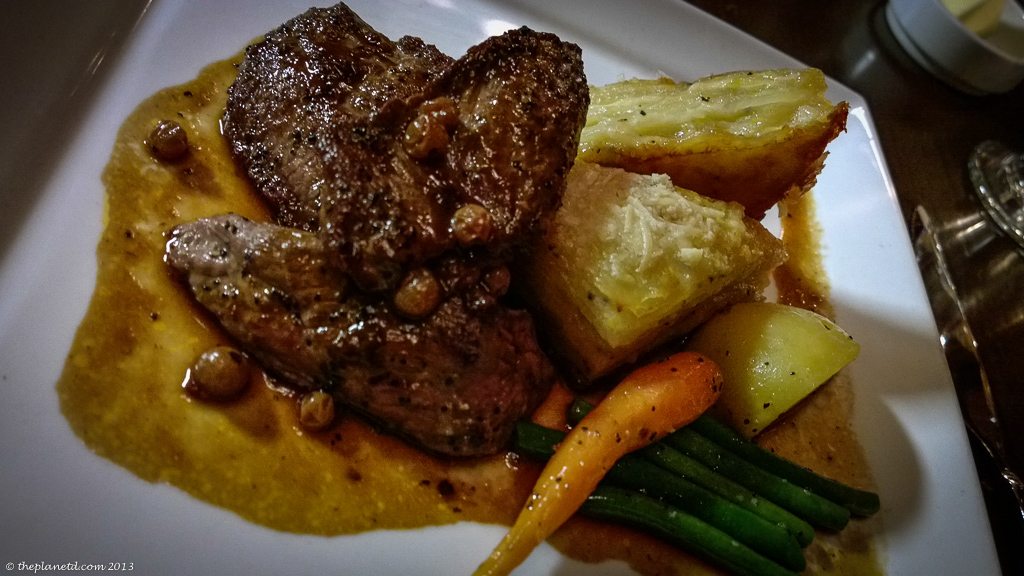 After our dinner, we retired to the bar for a nightcap. But this isn't your ordinary average bar. This is the coolest bar we've ever seen at a hotel. An outdoor Ice Bar awaits complete with tables, stools and a serving area completely made of ice. It's a work of art! With our parkas securely fastened, we enjoyed a hot drink as we cozied up to one another and said “Pinch Me, we're finally in Lake Louise and doing it in style!”

Looking for a place to stay in Banff? Check out our guide to Banff Hotels 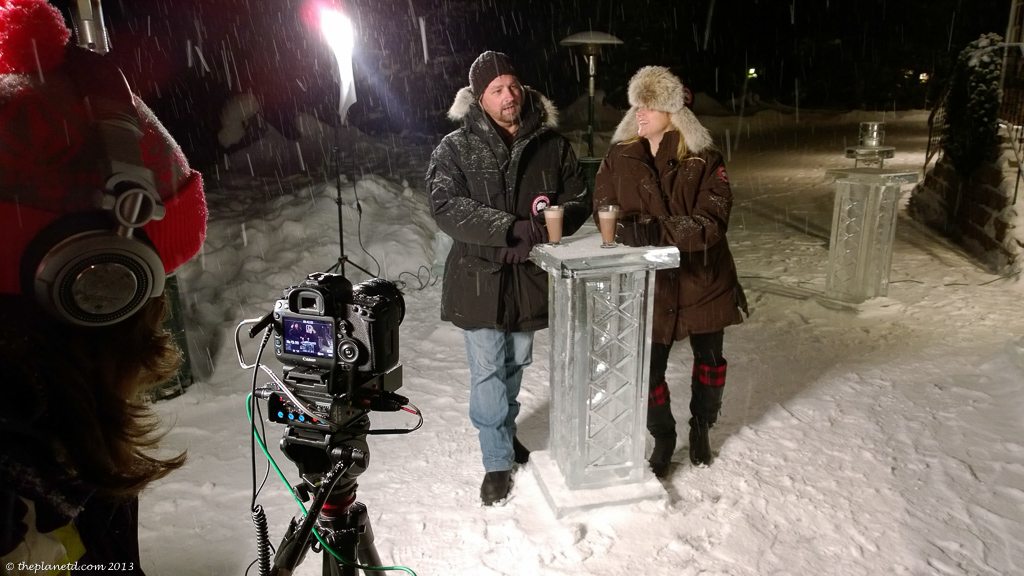 The morning started at 8:30 am when the hill opened. Lake Louise Ski Resort is only a few minutes away from Deer Lodge so we were one of the first up the hill. Not that it mattered, Lake Louise doesn't seem to see the crazy crowds of other ski resorts in the Rockies. We didn't have to wait for a chair all day!

Read: A Spectacular Helicopter Tour with Exclusive Snowshoeing in the Rockies

Time to hit the Slopes 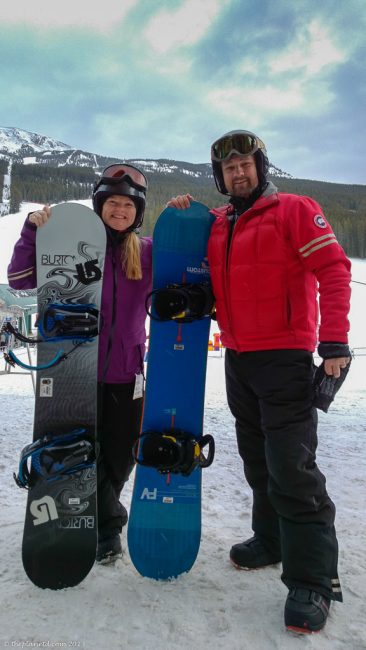 Ready to hit the slopes at Lake Louise.

Dave and I were a little nervous as we hadn't snowboarded in a year and our first run of the season was going to be captured on film. The crew was armed and ready with their cameras and GoPros, and we were holding our breath hoping that we'd be able to keep up with these kids fresh out of Film School

In the end it all turned out a-okay. 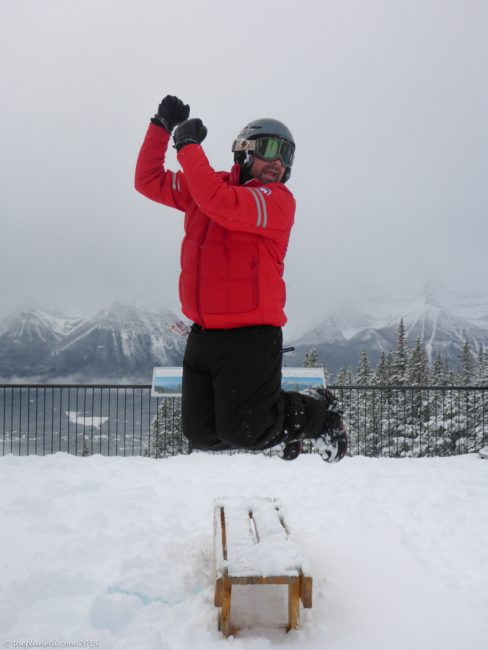 Dave was jumping for joy about the conditions!

We had an amazing day being shown around the hill by Dan and Shannon of Ski Louise. They took us to all the places that were free and clear and offering up the best views. Justine and Ryley followed along on their own snowboards with camera and tripods in hand and we spent our time being stressed out for them. 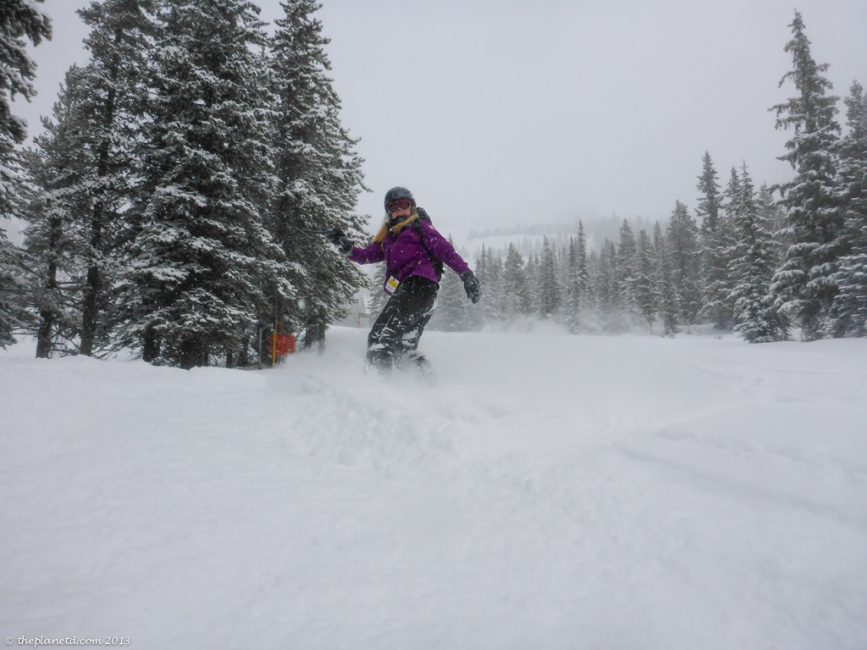 I can't believe they never fell or ran in to someone. If I had to snowboard alongside a couple speeding down a hill I'd be worried about hitting a tree. But they kept one eye on the course ahead and one eye on us and captured some fabulous footage.

Dave and I normally snowboard alone, but it was so much fun having an entourage with us while snowboarding in Lake Louise. We even had our friend Jeff Bartlett from Jasper along for the fun. He was our official fearless leader, getting us from one place to another and making sure all things went smoothly. 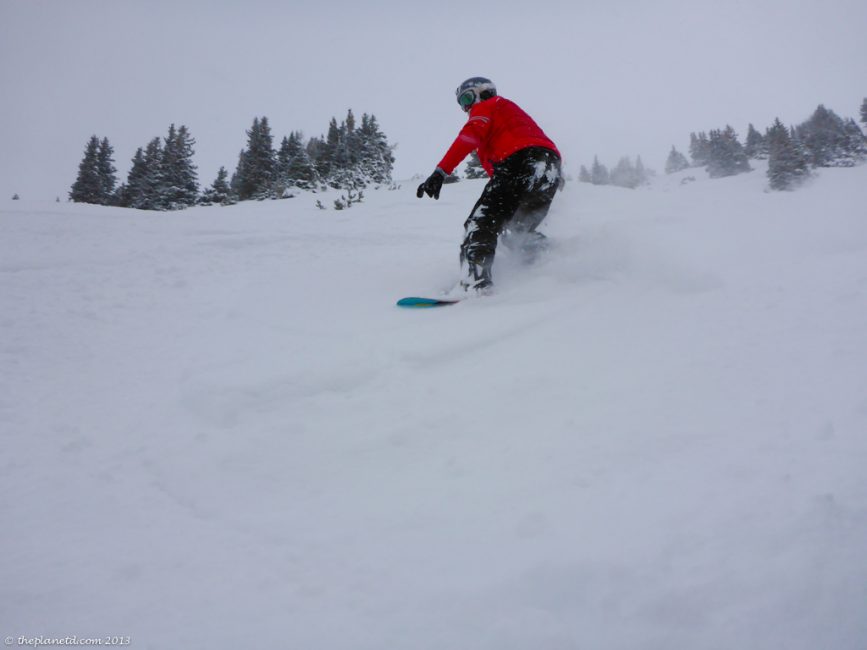 Dave taking on the Powder

During our two days on the hill, we even had the chance to tackle some powder. Since 30 cm fell while we were there, Shannon and Jeff took us out to some trails on the backside of the mountain so that we'd get the chance to play in the snow. Dave and I aren't the best at snowboarding in powder, we're more used to the ice of Ontario, but we always have fun trying to figure it out.

We've learned that the trick to snowboarding powder is, you can go fast and hard and not have to worry about falling. When you go down it's like landing on a pillow. Once we let go of the fact that yes, it's ok to fall without hurting our butts, it makes for a very fun adventure.

We ended off the days as so many skiers and snowboarders do, at the bar for Aprés Ski. It's so much fun to re-live the fun moments of the day over a beer with new friends and fellow ski lovers. 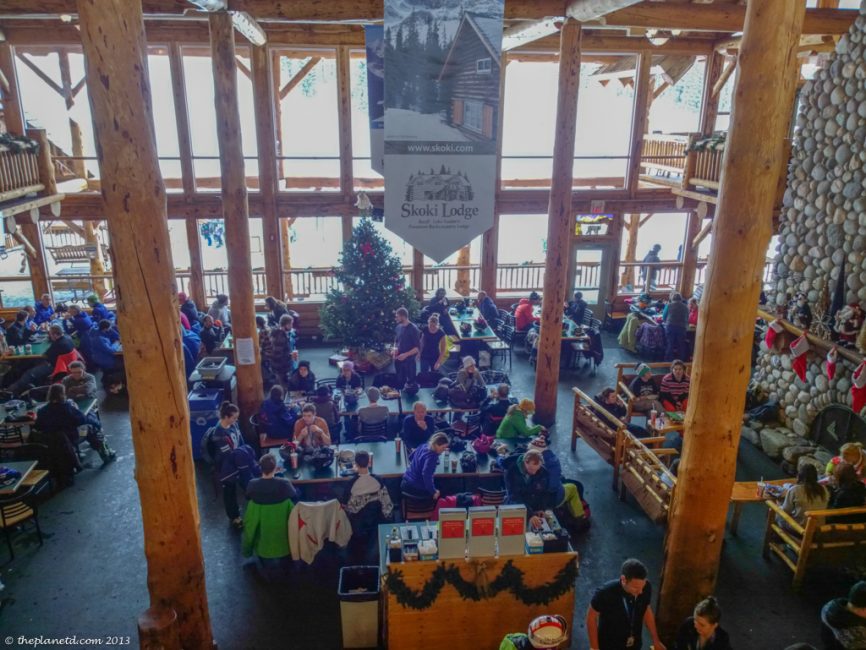 So with another ski destination ticked off the list, we felt content to know that we came, we conquered and we loved snowboarding at one of the largest ski destinations in North America. With 4200 skiable areas though, we've only barely scratched the surface!

Read Next: 10 of the Most Unforgettable Things to do in Banff