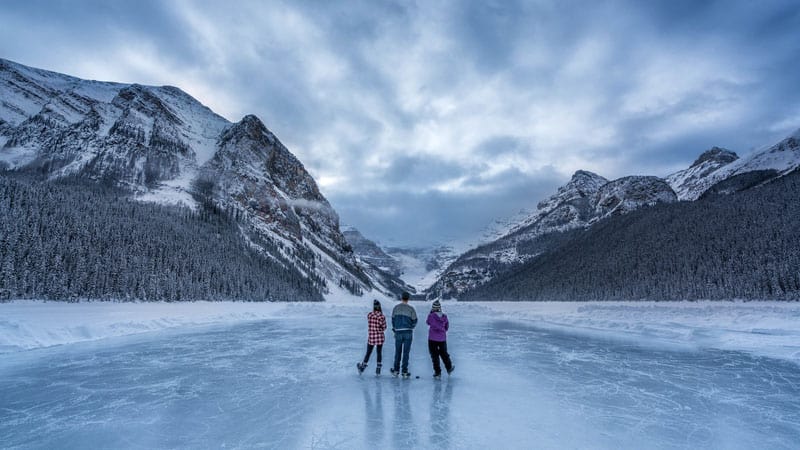 Set at the foot of Victoria Glacier, Lake Louise is an incredible setting surrounded by the Rocky Mountains. Nestled in a corner of the lake is the luxurious Fairmont Chateau Lake Louise, and once winter arrives and the ice freezes over, it’s time to skate.

Don’t want to stay at the expensive Fairmont? Check out our Top Recommendations of Banff Hotels

Lake Louise is famous for its world-class skiing and snowboarding. Every year they host world cup events and it was home to the Winter Olympics downhill race. It’s as world class as it gets drawing tourist from around the world. But there are other things to do in Lake Louise during the winter months such as cross country skiing, snowshoeing, spas, and fine dining.

For your outdoor winter adventures, Wilson Sports has you covered. We met up with Bill and Julie at Wilson Mountain Sports where they suited us up with skates, pucks and sticks for a friendly game of pond hockey on the ice.

Bill took us downstairs to see his state of the art skate and ski sharpening machine before heading out and told us the story of how his sharpening is so good, he recently had someone FedeX their cross country skies across Canada from Quebec to have his guy sharpen their skis. Now that proves just how good the job is done.

When visiting Banff and Lake Louise, you don’t have to come with every piece of winter sports gear you own. You can rent from Wilson Mountain Sports or buy any forgotten items. Never fear, Bill is here!

After we gathered all our gear, we took a short drive to the Lake Louise parking lot where we left our trucks and walked along the path towards the Fairmont and the lake.

Zambonies were hard at work clearing the ice and creating different skating rinks for people to enjoy. One skating rink was for people wanting to skate around or learn while the other was for the pond hockey players.

Bill told us that as the season goes on the entire lake is cleared of snow and fit to skate on. Now that would be awesome!

The arenas have mini pond hockey nets so you don’t have to bring your own and it’s the perfect size to play a good game.

It had been years since we’d been on skates, but as Canadians, we grew up on skates, so it didn’t take long to get our legs. Soon we were shooting the puck and scraping to a halt with ease. The only time I fell was when I went to get a puck in a puddle of slush and misjudged the spot where the ice meets the slush and turned right where the show went deep. It was a bit of a wet mess, but luckily the weather was balmy so I stayed warm, even if I wasn’t dry.

Playing pond hockey at Lake Louise is a communal game. Anyone can join in at any time and everyone is friendly and talks to each other. Nobody felt up to joining the four of us though. I put it down to we were just too darn good. The couldn’t bring themselves to being slaughtered by our team of four shooting the puck back and forth. (okay, maybe I’m exaggerating a little)

Pond Hockey made our list of the best things to do in Banff. Check it out to see what else made it!

Check out another iconic Canadian place to go ice skating: Ottawa’s Winterlude and skating on the Rideau Canal

We never did get a proper game going, but it was fun shooting the puck around and taking turns at being goalie. We ended up on the ice for a lot longer than I expected. I had forgotten how much fun it is to skate on an outdoor arena. It’s way better than in the rink where you are forced to skate around in circles. At Lake Louise, there’s so much room. The beginners can stay on one rink in the middle, while everyone has free run to go wherever they please.

If you go to Banff in the winter, make sure to skate on Lake Louise at least once. You’d be doing something truly Canadian.