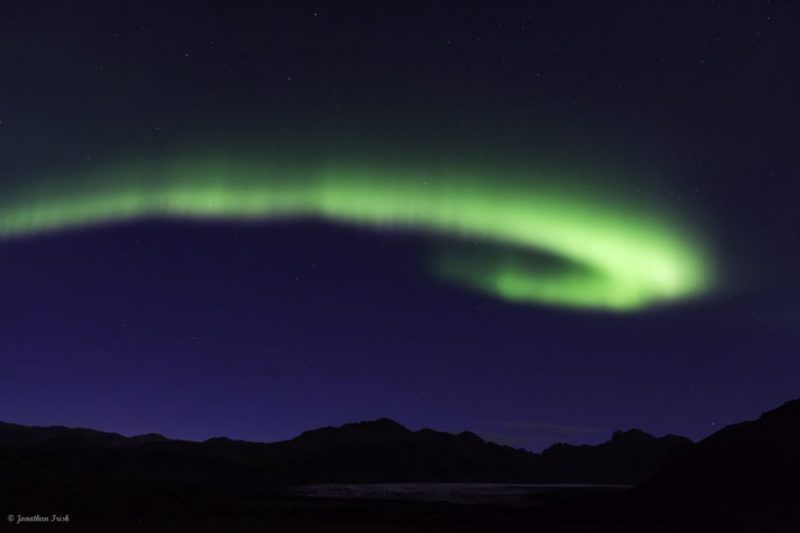 Ask any photographer and they will say that on their life’s shot list (if they were to have one) would be to capture the Northern Lights (a.k.a. the Aurora Borealis). This was certainly on my list, and I got my chance on a cold, clear night in southern Iceland.

I’ve never seen anything like the Northern Lights. They moved much faster than I anticipated, swooshing and swelling, expanding and contracting, in all directions. I was a spiritual experience, if I am going to be honest….I remember distinctly feeling like they were more than just charged particles…like they were a living, breathing presence in the sky.

This was my favorite image from the hour or so I spent capturing them. It was difficult to get a decent shape to the Lights since they moved quite a bit (after much play, I found the sweet spot to be an exposure between 8 and 10 seconds). This image happened to nail a beautiful, strong form in the sky…like a giant sky lasso.

For perspective, the white at the bottom of the image is the Vatnajokull Glacier, a massive glacier one-eighth the size of Iceland and the largest ice-cap in Europe. Just goes to show the size of the Northern Lights…they took up the entire sky. Absolutely Incredible.

Someone nearby said they looked like a Night Rainbow….which I thought was a fitting, and beautiful, thought.

Photo Tip: When I got the knock on the door that the Northern Lights were out, I was so excited that I grabbed my camera and my jacket and ran out of the door without my tripod. I ran up the hill to get to the best vantage point and by the time I was ready to shoot I realized I didn’t have my tripod.

I was tempted to run back inside but it would have taken 20 minutes and the Northern lights were mesmerizing. I didn’t want to miss a single moment of them. So I improvised….I found a large rock about two feet tall, found another rock that I put on top of that rock, thereby making my improvised table about three feet tall.

I had a wide angle lens, and used smaller rocks to get my camera to angle up to the sky. I sat on the ground to have a good view through the viewfinder, and then set my camera for a 2 second delay, which takes away any camera shake from manually pressing the shutter release (the delay gives your camera a few seconds to settle before the shutter releases).

My point with this is that all the gear in the world doesn’t make the photographer. It’s important to not be too reliant on your gear to get the shot. You need to think on your feet and be able to improvise, and you will be amazed what bracing yourself against a wall or, in this instance, building a rock table, can do for your shot.

Better yet, I learned my lesson and now pack my gear BEFORE I need to use it, which is a much smarter plan. But in a pinch, I always find a way to get the shot…NOTHING was going to stop me from capturing the Northern Lights.

The Northern Lights of Arctic Sweden