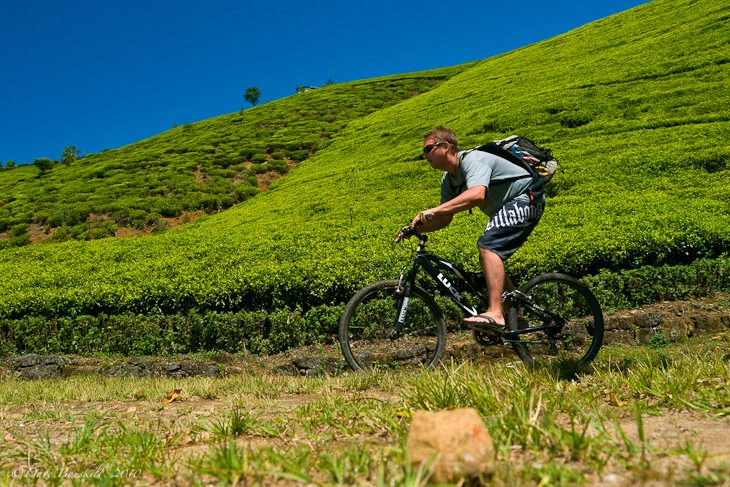 Dave and I love to mountain bike.  We hit the trails regularly in the summer and get out of the city as much as possible.  It is so much fun to ride a new obstacle with success, get up the nerve to go down a steep trail and totally gratifying to conquer an epic climb.

When we read that we could mountain bike in Sri Lanka's Hill Country, we made sure to hop on the train to check it out.

Mountain bikes can be rented in Tea Country of Nuwara Eliya for 1000 Rs per day.

Is it the Real Deal?

We didn't have any shoes or helmets and unfortunately they don't rent them along with the bikes.  We had been itching for a ride however, so we decided to chance it and see what trails are around the area.

We asked the shop if they could point us to the off road trails and we received some blank stares.  Then they replied, you can ride to Labookellie Plantation on the road.  It is a good ride with big hills.

Sure, but is it mountain biking and are there any trails to be found?

Oh well, I guess we are going to have to find out for ourselves.

We were told that the ride is about 16 km one way to the plantation.  We left early in the morning and were happy to see the clouds burn off and the rain of the day before disappear.

The bikes were pretty good.  Dave's had full suspension which didn't lock out so it made climbing tough for him, but that was a good thing because it put us on even terms for a change.  I was finally not huffing and puffing all day trying to keep up to him! The road was paved and busy all the way, but the scenery was stunning! Every turn brought more lush green tea plantations into view and deep valleys contrasted nicely with the blue sky.

Enough to Make us Happy

We found the odd dirt or gravel road and took off to explore a bit. We even road through a couple of trails in the tea bushes.  Don't know if we were allowed to, but we couldn't let these fabulous mountain bikes go to waste!

We saw some small trails that looked more like foot paths leading into the mountains and decided to skip those.  It can be a bit of a challenge trying to climb in flip flops and we had 32 km to ride that day. 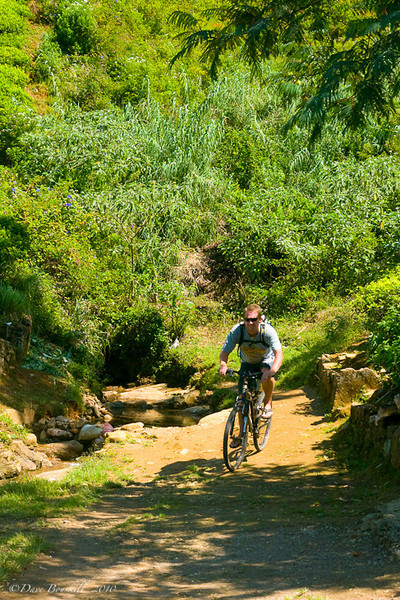 The ride out to the plantation was absolute heaven.  I am not exaggerating when I tell you that we had 11km of continuous downhill.  We had the km markers to watch and confirm it; and to remind us of the dreadful climb we would be facing on the way back to Nuwara Eliya.

But let's put that out of our mind for awhile and enjoy the freefall.

We stopped regularly to take photographs, grab some fruit and chat with the locals.  Almost always the nice chat turned into a polite ask for money, but it started off as good conversations.

We decided that if we took to long to get out and didn't feel like riding back, that we were going to hitch a ride with a passing lorry. Yeah, fat chance.

Have you met Dave and I?

We would never let ourselves of the hook like that.  We road through Africa with illness and infections. I only was forced off my bike when my leg swelled to twice the size. Dave was never forced off of his bike in Africa, even while he vomited for 50km one day in Ethiopia.

But it was a nice thought and took the pressure off in the morning so that we could let ourselves enjoy the stops and visits. 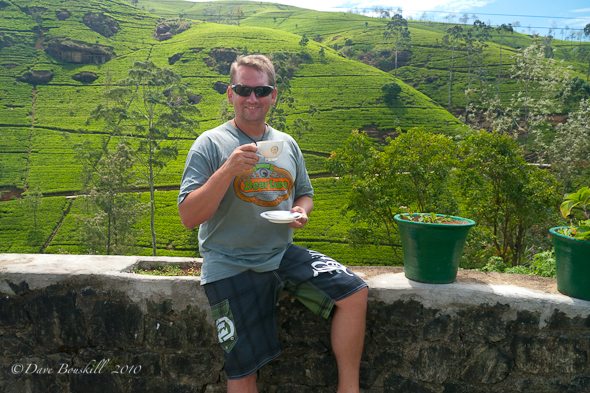 The Labookellie Tea Planatation was worth the visit.  They gave a free tour as opposed to the Pedro Tea Plantation which charged 100 Rs.  Labookellie even served a pot of tea on the terrace with a piece of delicious chocolate cake as we overlooked the gorgeous landscape.  (the cake cost only 40 cents and I was very tempted to have another)

Time to Head Back

We looked out over the view procrastinating and putting off the inevitable.  Yes, it was time to face the dreaded climb back.

As we mounted our bikes, tour buses and tourists with private drivers looked at us in astonishment.  Where did you come from? Where are you going? Do you know how hot it is out there. 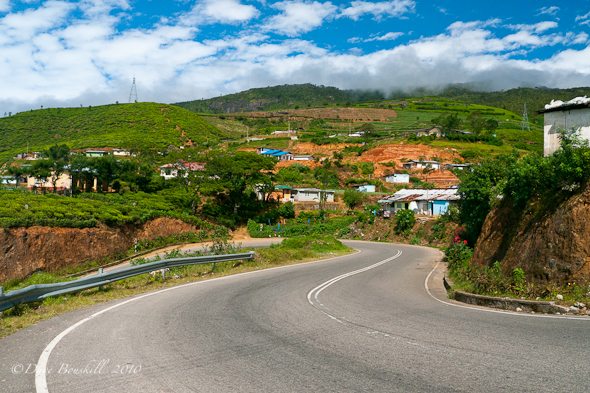 The Long road ahead!

But there is something different about being on an actual cycling journey rather than just renting a bike for a day.  Mentally you are prepared to ride when you book a trip to cycle through countries.  When you rent a bike on the spur of the moment, those 11km seem like so much more!

We made it back in good time though.  Less than two hours with a couple of stops for photos and warm orange juice.

I have to say, we felt pretty proud of ourselves being back to our old adventures and talked about how we are going to have to cycle through some countries again in the near future.