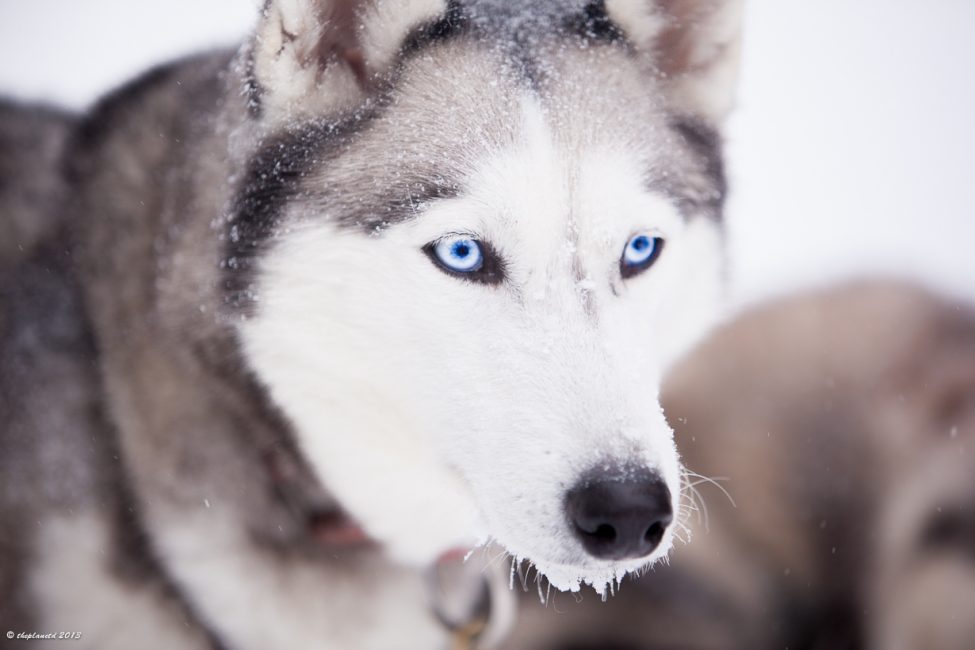 Recently we had the chance to go dogsledding up in Haliburton, Ontario. We admit, we didn’t know a lot about dogsledding and had our doubts about how dogs react to pulling people on sleds. Do they really like it? Are they happy?

While visiting Greenland, our hearts broke as we walked through “Dogville” in Ilulissat.

The town has a population of 4500 people and just as many dogs chained up outside of town.

We didn’t like it. It was terrible seeing these dogs sitting outside on short chains with no shelter.

As we learned more, we didn’t feel much better about the plight of the Greenland Sled Dog.

In Greenland, sled dogs are stuck in a situation where modernization and the displacement of indigenous people has taken the traditional use of sled dogs nearly out of commission.

Where they were once a part of the community and used regularly for hunting and travel, there are now 21,000 dogs chained to stakes on the edge of the town when not in use.

Like many people, we were skeptical of the dogsledding industry.

So this it was a good opportunity for us to visit Haliburton, Ontario and spend time with Winterdance and their team of sled dogs to see what life is like for their working and racing dogs.

We met Tanya McCready and Hank DeBruin at their log cabin in Haliburton where their kennels are located right on their property.

Tanya and Hank bought their first husky 17 years ago when they were married and instantly fell in love with dogs.

Over time, they grew their dog family, and now they have 150 purebrd Siberian Huskies in their kennels where they run dogsled tours all winter long.

Hank also has a race team that competes in epic races such as The Idatrod and Yukon Quest.

We took a tour of their kennels and unlike our experience in Greenland, here in Haliburton we felt uplifted.

Hank and Tanya have a team of employees working with them to take care of their dogs and give them the love and care they need.

As Hank said “everyone who works for Winterdance stays for a long time.”

It’s hard work and you have to love dogs so when people do join their team, they are like family”

We could easily see that their employees felt like family.

The day we arrived, people were over at the kennel shovelling snow off the roof with smiles on their faces.

One girl said to us “There’s no place I’d rather be today.”

They heard we were going out on an overnight run with Hank and everyone offered up their services to lead the way on the snowmobile to keep an eye out for angry moose.

Even after a full day of work, they were eager to get out on the trails again.

When we entered the kennels we were thrilled to see that each dog had spacious kennels and comfort.

They are fed only the best food and they are let out daily to roam freely in the huge yard.

A dog in the city would die for this attention and running space!

The dogs are rotated when working to make sure that they have plenty of rest.

They have days off but when another group of dogs gets to run with out them, they are not happy. We learned that these dogs love to run!

It was so much fun to watch the dog’s excitement when they saw Hank’s truck filled with kennels pull into the yard.

They lined up like school children anxious to get in to their beds because they knew that this truck meant a good long run.

We asked Hank and Tanya about a terrible scandal that happened in Whistler where a company slaughtered their dogs due to the economic downturn.

They said it was heartbreaking and that they didn’t understand why someone would do that.

The dogsledding community is a tight knit community and if anyone was in dire straights, everyone would be there to help them out.

They said if only that person sent out an email or made a call, he’d have had his dogs places within 48 hours. They didn’t need to do what they did.

Sadly, like everything in life, there is a chance to have a bad apple in any community.

There are bad people in every aspect of life and this company wasn’t only a bad dogsledding company, they were bad people.

We’ve followed dogsledding in the past and we already knew this about the North American dogsledders out there.

We’ve met dogsledding legends Lance Mackey and Jeff King while traveling in Alaska and like Hank and Tanya, you could see how much they both love and respect their dogs.

People seem to not realize that sled dogs are made to run.

They need open space and they want to go for as long as they can. My family grew up with a Husky and lucky for us, we lived in the country where our dog could roam free.

She’d disappear for days at a time and come back smelling like a skunk or a dead animal, but that didn’t concern us, because we knew she had to run.

Dave owned a husky for a short time as a child and even though his family had the best intentions, it didn’t fare well in the city. I

t chewed at the fence, had anxiety and eventually they had to give it away to a farm.

Dogsledding Huskies have the best of both worlds. They get the attention and love that they need but also get the chance to run a lot.

We learned a lot during our time in Haliburton by simply observing the dogs behaviour.

Watching them be picked up like toddlers by Hank and his guides made us smile.

These dogs literally acted like five-year-old children heading outside to play.

They ran around wagging their tails, they barked with excitement and then the minute they were picked up they settled down like they were relaxing in their mother’s arms.

Once they were hooked up to the sleds, they were eager to run.

You have to hold them back while they hook the entire team up or else they’d take off down the trail with out you.

The closer they get to take off, the more excited and loud their barks get.

You feed off their energy and become excited yourself. You know you are in for an amazing day on the trail.

As the barks continue, you have to quickly get on the sled and ready to go because the dogs are chomping at the bit.

They’re pulling on the sled so hard that you have to hold on to the brakes and keep the snow hook firmly in the ground or they’ll be dragging you behind.

Once you let go of the brake, they instantly go quiet and start running.

It is so much fun watching them from behind.

Their tails wag away as they sniff and posture for position. I’ve never seen an animal so much in their element.

Whenever you hear dogsledders say “My dogs love to run” you have to believe them.

If you put on the brake for some reason like you need to fix your hat or organize your camera, the dogs look back at you with a look of “What are you doing?” Don’t you know we’ve got to keep running?”

And run they did. If you have the chance to try dogsledding, we highly recommend it.

See for yourself how happy and excited the dogs are on the trail. Our skepticism melted away during our time with Winterdance. Make sure to choose your dogsledding company wisely though.

Be a responsible tourist and do your research, not all companies are created equally.

For more information on Booking your own dogsledding trip in Ontario visit the Winterdance website.

21 Amazing Adventures Around the World

Strange, Funny, and Odd Names of Towns in Canada