It was the first day that we’d be able to get on the water in Greenland but Dave and I were torn. We had to make a decision at 7:00 pm the night before our landing in Ilulissat Greenland to see the specatular Ilulissat Icejford.

The expedition team had planned a sunrise walk staring at 5:00 am. We’d be hiking through the Arctic Tundra to UNESCO World Heritage Site, Ilulissat Icefjord; home to the most active calving glacier on earth.

We love kayaking, but there was no way we were going to miss that. This is the place where most of the Icebergs in the Northern hemisphere are formed.

Ilulissat is located on the Western side of Greenland. It’s the third largest settlement in the country with a population 4500.

There are easily just as many sled dogs living in Ilulissat. We walked through the morning mist in silence.

It was 5:00 am and the town was still sleeping, but once we hit the edge of the village and entered sled dog city, it was another story.

Thousands of Greenland Huskies chained to their spot barked as we passed.

It was heartbreaking to see them stuck to their five foot radius running around in circles while their puppies roamed free.

Sled dogs are used during the winter for hunting and transportation, but during the summer months, they are banished to the outskirts of town with nothing to do but watch tourists pass to view the towns most popular attraction.

But, that’s a whole other article that warrants my attention, today, we’re talking about ice.

Once we were on the tundra and had entered the boundary of the UNESCO World Heritage Site, the barks faded away and quiet set in once again.

The town of Ilulissat has built a boardwalk through the field to protect the vegetation.

The tundra flora is delicate and easily disturbed.

Conditions this far north are difficult for anything to survive and humans have a tendency to disrupt nearly everything in nature. Sticking to the trail, helps to keep things in order.

What surprised us most was all the colour on the ground. We didn’t expect Greenland to be so colourful.

I expected dark black rocks possibly covered in some dark black moss, but this field was filled with beautiful colours of orange, yellow, red and brown.

We were in Greenland during the autumn months and the vegetation of moss and shrubs were showing off their best fall colours.

We were told that they flower in the Spring creating an entirely different colourful landscape and we made a note to come back up here one day in the Spring.

In Ilulissat, we were above the tree line and nothing we saw grew over a foot.

The soil seemed almost springy with moss, but we know that there is only a few inches of nutrients before hitting the rocky ground underneath.

Surrounded by hills on either side, we walked through a long valley that reminded us of parts of the Tongariro crossing in New Zealand.

It could have been middle earth, but instead we were at the top of the world.

After about 15-minutes of walking, it hit us – one of the most spectacular views on earth. Jutting up from the sea was an enormous iceberg (larger than an 10 story apartment building).

The contrast was stunning. I could have stood looking at that view for hours. It truly was unlike anything we had ever seen.

Ilulissat is home to the Jakobshavn Isbræ glacier, it moves at a rate of 20–35 m (66–115 ft) per day creating some 35-billion tonnes of icebergs every year.

The glacier flows from Greenland’s polar icecap and ends at  the Ilulissat Icefjord where giant chunks of ice break off from the glacier (known as calving) and fall into the sea.

The bay becomes cluttered with ice. Some icebergs are so large, like the one we witnessed, that they sit on the bottom of the bay and are trapped until some of their ice is melted off allowing them to drift north through the Arctic Ocean.

It can take years for a large iceberg to break free.

They have have a short window to melt before winter freezes them in and then they will possibly roll a few times before they finally work their way out to sea.

An iceberg rolling is so dangerous that you are not allowed to go anywhere near the coast.

Icebergs are only 10% above the water.

Another 90% sits below and if one rolls, it creates a tsunami that will take out anything in it’s path. We stayed at a high vantage point to look at the bay.

When the icebergs do break free, they flow North with the current to the Arctic Ocean before joining the Atlantic Ocean and heading South.

Some icebergs don’t melt away until they are farther South than New York City.

It is believed that the iceberg that sank the Titanic most likely was born here.

After about 1.5 km of walking on the boardwalk, we climbed a small hill overlooking the fjord.

There is a picnic table and park benches set up to make things more comfortable and we found ourselves staring at the view for well over an hour.

You could hear the glacier constantly calf in the distance and you could watch the ice change before your eyes. The one giant iceberg refused to budge as it stood proudly above all the rest.

We were still in the Arctic though and sitting for too long caused a chill in our bones.

The wind picked up as the sun ducked behind the clouds and it was time to go.

The entire night before, we worried that we may have made the wrong decision not to go kayaking, but after witnessing this beautiful scene, we knew we made the right choice.

There seems to be a new UNESCO World Heritage Site popping up at every turn.

We have visited some and wondered why they had been named so, but the Ilullisat Icefjord in Greenland is one of those places that truly deserves the honour. It is a spot that is shaping our world.

Researchers have been studying it for over 200 years and it is an important area to study the affects of Global Warming.

If you want to add an interesting World Heritage Site to your list, the Ilulissat Icefjord is probably the most unique one you will ever see. The town is worth visiting too.

It gives you insight into life in the Arctic.

There is no way to travel across Greenland on land. You must travel by ship, plane or possibly dogsled. This town’s harbour is filled with boats the way parking lots are filled with cars everywhere else.

It’s an interesting visit to see the museum and old church and to walk through the streets to see how different life is above the Arctic circle, but how it is surprisingly, just the same.

Bathing and Bubbly at the Top of the World
Arctic or Antarctica? How to Choose Your Polar Expedition

Quark Expeditions invited us to experience their Greenland Explorer Tour. All commentary is our own and we’ll be giving you an honest view of what it’s like to take a Quark Cruise. See what other Polar Expeditions they have to offer 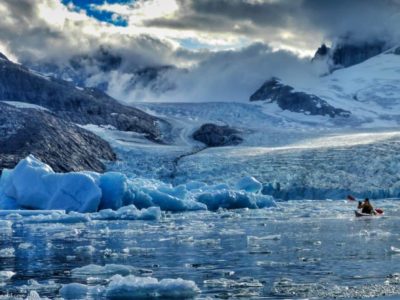 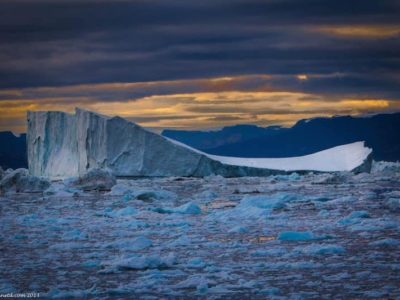 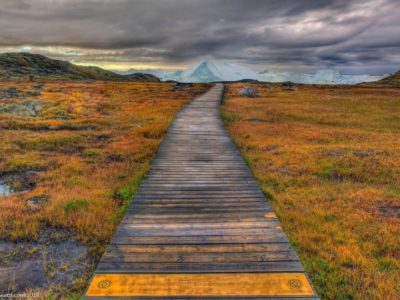 38 thoughts on “Ilulissat Greenland – Icebergs are Born at Ilulissat Fjord”