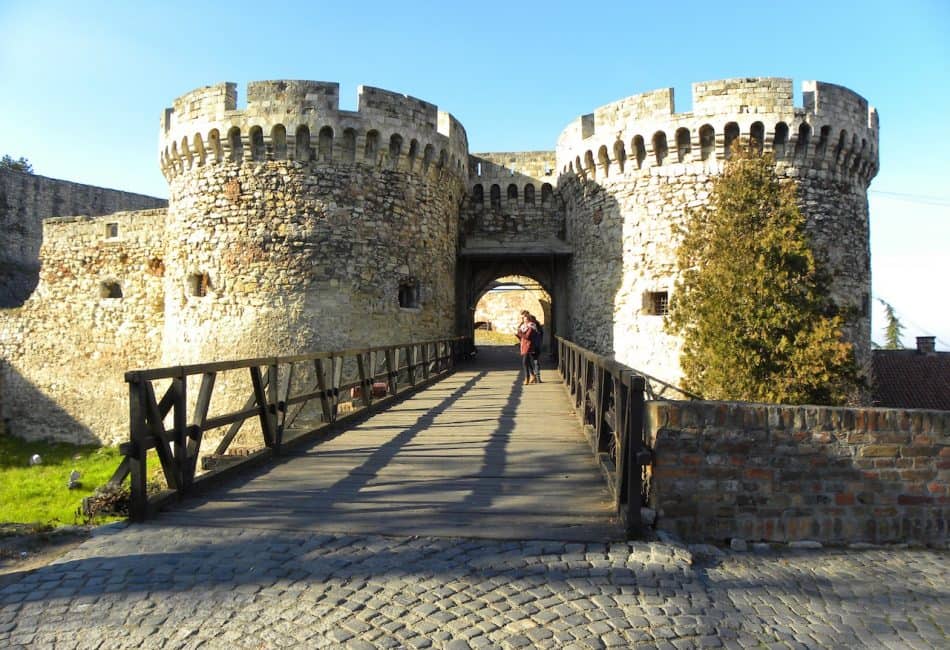 We really didn’t know what to expect of Belgrade. The capital city of Serbia is one of the oldest cities in Europe.

We were flying back from Japan and had chosen the country for a two-week stopover for one reason – it was the only country in the ex-Yugoslavia we hadn’t yet visited.

Our knowledge of Serbia amounted to its reputation as being the Balkan “bad boys” (gained during the wars of the ’90s), tennis player Novak Djokovic (currently ranked #2 in the world), and its historically close ties with Russia.

We didn’t know much else about the country and, as Western tourists, we didn’t exactly anticipate a warm reception.

Our expectations couldn’t have been further from the truth. In fact, many things about Belgrade – and Serbians – were to surprise us.

Belgrade is a bit rough on the eyes

Our very first impression of driving into Belgrade was that it was rough on the eyes and had seen better days.

Sidewalks are cracked and broken, there’s a lot of graffiti, and many buildings still bear the scars of the 1999 NATO bombardment.

Every city is prettier in the summer – we arrived in early December to grey skies and leafless trees which didn’t help matters.

There are similarities to both Budapest and Zagreb. But Belgrade is poorer, you just see it in the infrastructure of the city.

The confluence of the Danube and Sava rivers has a history dating back 7,000 years.

The city, one of Europe’s oldest, was part of the Roman and the Byzantine Empires.

There has been many a Serbian uprising over the centuries from the 1500s to the 1900s.

It was controlled by the Bulgarians, Hungarians, Franks, Ottomans, and Habsburgs.

It was the capital of Yugoslavia from 1918 to its final dissolution in 2006.

Because of its strategic location between East and West, the city has been involved in 115 wars during its history and has been burnt down an incredible 44 times.

That explains why you won’t see many intact historical sites around the city.

There’s one exception: Belgrade Fortress. It dates back to Roman times and looks down at the confluence of the two rivers.

It’s where you’ll really feel the impact of Belgrade’s history.

Serbs have a high level of education – and speak excellent English

We’ve been to all the ex-Yugoslav countries and love them all in different ways. But we were incredibly impressed by the Serbs.

In fact, in almost 3 years of full-time travel, we haven’t encountered a population who speak English as well as a 2nd language.

Sure, some of the older people or lower classes don’t speak English at all. But most people under 40 who’ve gone through the education system speak flawless English.

It was a shock.

We also found out that there is a growing number of American companies who have moved their technical services to Serbia precisely because of the proficiency in English.

Serbians are very attractive, men and women alike. And tall – I’m 5’10 and I was average height (or maybe even less) in Serbia.

When visiting the Serbian capital, you'll be surrounded by chic and stylish citizens.

See these beautiful photographs of Slovenia

There are strong ties to Russia

We knew it before arriving and it was confirmed when walking around the city.

And the people in the markets are Russian.

The affinity between Russians and Serbs can be attributed to religion (both practice Eastern Orthodoxy), historical alliances (often against the West), political views, language (similar enough), and life philosophy.

There is deep resentment towards NATO, the US, and the Clintons

Bill Clinton was president of the US at the time and in both cases sided against Serbia, including ordering the 1999 bombing of Belgrade (at the insistence of Hillary).

Over 2,500 Serb civilians were killed and the Serbian economy decimated, something the country is still climbing back from.

What galls the Serbians more than anything was being blamed as aggressors in the Kosovo War, a war precipitated by the Kosovo Liberation Army (a group that just the year before had been deemed a terrorist group by the UN).

Kosovo has since declared itself an independent country which the majority of countries in the UN have recognized.

Serbians still consider Kosovo a province of Serbia (it’s best not to bring this subject up in conversation).

It is why Serbians today want no part in NATO membership, preferring instead a closer association with Russia.

Despite the above, Serbians we met were incredibly engaging.

They wanted to talk and it seemed very important to them that we leave with a good impression of Serbia.

The day we arrived, a friendly old man in the elevator tried to speak to us in German.

Realizing we didn’t speak the language, he switched to French. We ended up having a 10-minute conversation in French.

Our Airbnb host invited us to her home in the suburbs where she served coffee and biscuits while talking about Serb traditions, history, and current day life.

On another day, getting on a bus, the driver decided we would be friends and insisted that we stand next to him.

He didn’t speak English but for 20 minutes he talked to us the best he could, listing his favorite football and basketball team and telling us (when he found out we were Canadian) that tennis player Milos Raonic (our best tennis player) was born in Montenegro.

Throughout our two weeks, we would have many similar encounters with locals. Serbians charmed our socks off.

We had no idea. But Lonely Planet calls Belgrade the world's number one party city.

When the bombings started in 1999, locals decided to enjoy their last days partying. Belgrade’s clubbing scene is now the hottest anywhere (only Ibiza rivals it).

The best time/place to party is in the summer at the floating clubs (barges) along the riverbank.

We didn’t see any of that because we were there in December. But this is what your typical floating club looks like in the summer.

You can indulge in Belgrade and it won’t cost you much.

We went to one of the city’s most popular restaurants (Dva Jelena, the Two Deer Restaurant. Highly recommended) where we had 2 starters, 2 main meals, 2 bottles of wine, coffee and dessert (we went crazy that night and left with doggie bags and half a bottle of wine).

Of 73 European cities, Expatistan.com ranks Belgrade as the 10th cheapest (Prague and Budapest are tied at 16th).

* Note: Skopje (Macedonia), another interesting city we visited in 2016, was ranked 3rd cheapest. For those curious, Kiev is currently ranked as the cheapest European city.

Everybody smokes in Belgrade (everywhere).

Indoor smoking was banned in January 2016. It doesn’t matter – these are the Balkans.

Everyone smokes and nobody cares about rules.

You’ve had smoke blown in your face and smell like an ashtray? Welcome to the Balkans.

Belgrade is a very walkable city

Belgrade’s old town is compact and very walkable with a large, pedestrian main street (Knez Mihailova) traversing the old town from Republic Square at one end to Kalemegdan Park (where the Belgrade Fortress is located) at the other.

I mentioned that we thought Belgrade was a bit rough looking at first glance – seeing this part of the city, with its impressive buildings, squares, and green spaces gave us a totally different perspective and helped warm us up to the city.

The Balkans are a hot travel destination. See why you should travel to Slovenia right now!

Belgradians are beautifying their city with street art.

There are murals everywhere, in fact Belgrade might have more street art than any other city we’ve visited.

Belgrade has some impressive Orthodox Churches.

Belgrade’s Saint Sava is one of the largest church buildings in the world. St. Mark’s Church is also worth a visit.

But if you want to see typical old-style Orthodox churches, go see Ružica Church and the Church of St. Petka (both located outside the northern entrance of Belgrade Fortress).

Their colorful and ornate interiors are spectacular. Visiting these two churches was actually our sightseeing highlight in Belgrade.

Belgrade is a city of the future

Eagle Hills, a company based in Abu Dhabi is investing in revamping Belgrade’s waterfront.

A large exclusive apartment tower was nearing completion while we were there while, in the next few years, there will be ultra-modern skycrapers and luxury hotels as well as the largest mall in Europe.

China has increasingly invested in steel, energy and infrastructure projects in Serbia.

These investors see an educated, undervalued workforce that speaks excellent English. Expect the cityscape to change dramatically over the next few years.

We loved our time in Belgrade and want to see more of Serbia.

We had just come from 7 weeks in Japan which, while enjoyable, at times felt too organized and too scripted.

Belgrade reminded us why we enjoy traveling.

There’s no pretense with Belgrade.

It’s a bit gritty and there might not be a ton of ‘must-see sights’.

But it’s a comfortable city where you can walk around, go to the beaches (yes, they have beaches), have a drink or get a good meal without feeling that you’ve just walked into a tourist trap.

And with the language factor, it’s an easy place to connect with locals.

In fact, locals are the main reason we’ll be back: after writing about Serbia on our blog we’ve had an outpouring of kind words, recommendations and even invitations to stay at people’s homes for free.

That, for us, makes Belgrade – and Serbia – a special place.

Read Next: 10 Places to Visit in Bulgaria