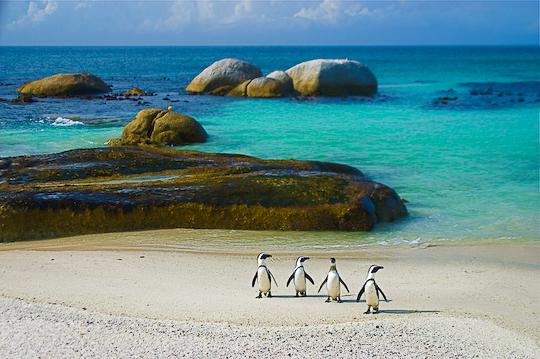 Just south of Cape Town in South Africa, you will find a colony of Penguins hanging out on Boulders Beach in the picturesque village of Simon’s Town.

If you are anything like us, we are suckers for Penguins. They are simply the cutest little things and we can watch them for hours waddle and swim.

The Simon’s Town Penguins are known as the African Penguin or the Jackass Penguin on account of the braying sound that they make.

Numbers are slowly coming back in South Africa thanks to conservation efforts.

It is hard to believe, but for decades these little guys were hunted for their meat and were considered a delicacy.

Add man-made disasters like oil spills and a decline in their food supply they have fallen from several million to less than 200,000.

A great day trip from Cape Town is to take a drive to Simon’s Town and venture down to Boulders Beach where you can walk the boardwalk.

This is the perfect spot to view the colony in their natural habitat. The penguins settled here in 1985 and have been continuously growing ever since.

Nobody knows why the penguins decided to colonize this portion of the beach.

The large human population should have been a deterrent, however, the abundance of fish in the waters due to a ban on commercial fishing probably played a role.

My opinion is that they saw a beautiful beach with great rocks and boulders for sunbathing and relaxing.

It was South Africa’s winter while we were there, but in the warmer months, you can actually swim with the penguins as they play and frolic on the public beaches around town.

Give yourself more than a day to visit Simon’s Town.

It is a beautiful seaside village filled with restaurants, cafés, and beautiful scenery.

You can go sea kayaking or take boat trips along the coast.

Cape Point is a short jaunt from the town and if you happen to find yourself there between June and November, you can view the majestic southern right whale.

Book a Cape Town to Cape Point Explorer Tour that stops at Simon’s Town to see the penguins and then continues on to the Cape of Good Hope and Cape Point.