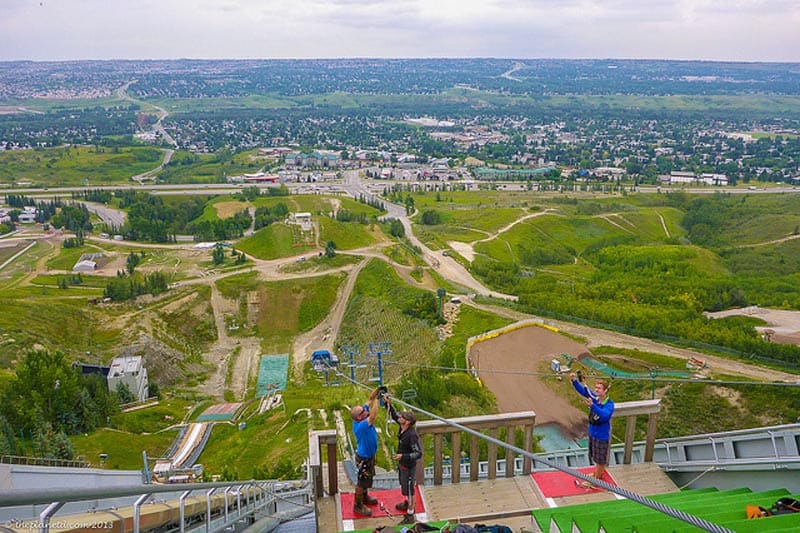 Bobsleigh, Zip Line, and Luge Oh my! Yes, you can have all these adventures at Calgary's Canada Olympic Park!

Calgary, Alberta was home to the 1988 Winter Olympics.

Millions of people looked on as Canada’s most beautiful province was introduced to the world and it didn’t disappoint.

Home to the Rocky Mountains, the Badlands and the rolling foothills of Cowboy Country, Alberta really showed us what it’s got.

Just a short drive from Calgary, Olympic Park is a fantastic way to spend a day trying adrenaline activities and family adventures.

It’s an Olympic training facility for ski jumping and bobsledding and tourists and visitors get the chance to try them out for themselves.

The Calgary zip line is the steepest and fastest in North America!”

And the kicker is, you leap off the top of the ski jump and ride down right over the ramp!

About the Zipline at Canada Olympic Park

Reaching speeds of 140km per hour, you are going to feel a jolt when you hit the bottom and you need to slow down somehow.

We took the elevator to the top of the jump at a height of 110 meters (360 feet) and peered out over the ledge.

The view is amazing but if you have any fear of heights, this is the place you don’t want to be.

The top of the ski jump is actually the highest vantage point in all of Calgary.

This line is 510 meters long (1673 feet) and was so fast my stomach lurched ever so slightly.

Within seconds, I was whizzing at top speed.

I had to keep my head about me though because I was told to throw my parachute out at the last pole before the tower. I threw out my chute and instantly felt myself slow down.

We had one more zip line to bring us down to the bottom and for this one they encouraged us to hang upside down which we happily did.

If all of this sounds a bit to tame for you, give the Freefall a try. It's like a bunny jump only different

It's a freefall from 8 stories high with a slow decent to the ground. And the cool thing about this activity, is that you get two jumps!

We didn't do this here but if you want an adrenaline rush, we have done a bungy jump and it's a thrill!

Calgary has one of the few bobsled training centres in the world and teams from all over the planet come here to train for the upcoming season.

The best thing is the bobsleigh track is open to the general public for rides.

Our driver Heath Spence competed in the 2014 Olympics for team Australia.

He works all day taking tourists down the track and then spends the evening training.

How Does it Feel to Ride a Bobsleigh Track?

After one run on the track, Dave and I both felt a little woozy and I couldn’t believe that Heath goes up and down all day doing run after run and doesn’t feel a thing.

The body really gets jolted around and you feel it in everything.

The athletes are rock hard though and every muscle is holding bones and tendons in place so they can take the jostle much better than we little people.

In Calgary, you get to do the whole bobsleigh run from top to bottom,

I kept thinking it was about to end, but we just kept on going. We were tossing and turning through bank after bank.

We felt the effects of 3Gs and it was wild to feel the snap going around those high corners.

The Bobsleigh runs both summer and winter.

Our next adventure at Canada Olympic Park was the luge.

Don't worry it’s not the actual luge like the Olympics, this is more like a go-cart ride downhill. So it is one activity that is fun for the whole family!

This was a fun ending to the day as we could go as fast or as slow as we wanted.

You can take a leisurely spin down the track or you can let it go full-tilt boogie.

We did a bit of both.

We let her rip for a bit and then slowed down to take some photos and enjoy the ride.

It reminded us of the Jamaican bobsled in Jamaica which is ironic because it was here at the 1988 Calgary Olympics that the Jamaican Bobsled team made their debut.

They became so famous that the Movie Cool Runnings starring John Candy.

Speaking of fun for the whole family, Canada Olympic Park also offers an 18 hole mini-golf course in the summer.

It has a great view of the Canadian Rockies and is a fun way to spend the days outdoors with the kids.

If you want to hit the trails, there's also mountain biking at Olympic Park during the summer months.

You can take a chair lift up to the top and then spend the day explore its 11 trails. There's trails for the serious downhill riders and easier beginner trails.

It's a great way to try mountain biking without having to climb up an epic hill to begin like we so often do in Ontario.

If you just want to go to the top for some scenic views of Calgary, Winsport lets you ride the chairlift.

This is a nice activity for anyone at any age.

A visit to Canada park is a blend of history and adventure. While you are there, be sure to stop in at the Sport's hall of fame

A day at the Canada Olympic Park outside of Calgary is a must when visiting Alberta.

Being so close to Calgary this is a great option for skiing or snowboarding.

It has two chair lifts and 4km of slopes reaching an elevation of 1,246 m.

It also has a world-class superpipe.

If skiing seems a bit too adventurous for you, hit the slopes and give snowtubing a try. There's no skill necessary.

All you have to do is show up and sit on a tube.

Gravity does the rest!

If you are visiting Canada, you can't miss trying our favourite national sport, hockey.

Okay, you don't have to play hockey, but you really should get on the ice, and at Winsport Canada Park, they offer public ice skating.

It's a safe place to give it a try for beginners. Helmets are mandatory and the rink is indoors.

Winsport Canada Olympic Park is a short drive out of Calgary.

Book your Bobsled, Zipline Package at their website, Winsport Canada. 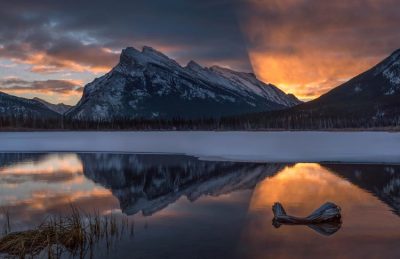 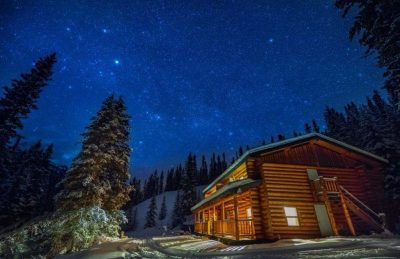 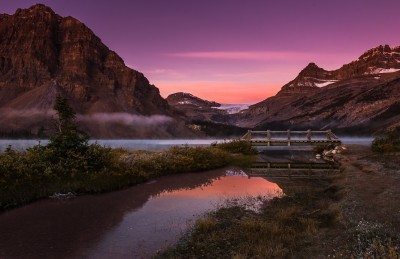 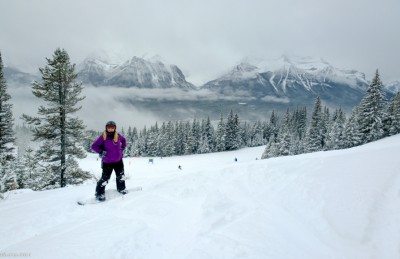