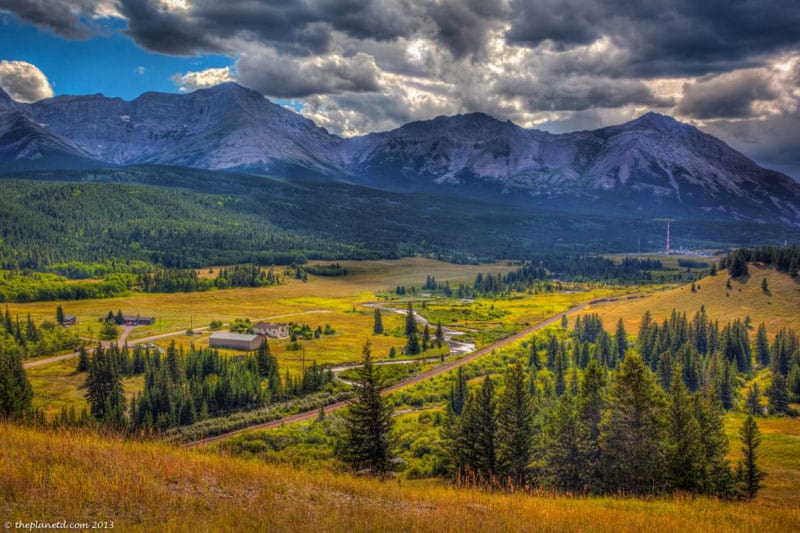 Pincher Creek is a small town in Southern Alberta that is the jumping off point for Waterton Lakes National Park which is about one hour away.

It is a place where the Prairies meet the Rocky Mountains and it is an absolutely beautiful setting.

Wind farms line the plains with stark mountains filling in the backdrop.

Cattle graze in the fields and giant bales of hay dot the landscape.

We loved having the freedom to drive around from place during our road trip through Alberta to see all the tourist stops.

One thing about travel in Canada is you must have a car is a must.

We have a huge country and every province is very spread out. So, do as the Canadians do and drive!

Our favourite site happened by chance as we were driving to Crowsnest Pass.

The Burmis Tree was a site we caught by accident out of the corner of our eye as we passed a group of bikers taking a look.

This tree welcomes travelers entering “The Pass” and is the symbol of endurance for the people of the region.

This Limber Pine Tree has stood on this site for seven centuries.

Unfortunately, this tree died in the late 1970s and eventually toppled over in 1998.

However, it had become such a symbol of Crowsnest Pass that the community rallied together and stabilized the tree.

There are now stainless steel brackets anchoring the roots and a pipe inserted into the trunk to give it support.

I’m really glad that they did this as the tree is an ominous site that is fitting for this historic place.

Crowsnest Pass is home to the deadliest rockslide in North American History.

It is believed that over 90 people were killed during the deadly rockslide here on April 29, 1903.

Dave and I noticed a valley of giant boulders and rocks as we drove by, but we thought it was a path left by an ancient glacier retreat.

It wasn’t until we visited the Frank Slide Interpretive Centre that we realized that this was from a rock slide in recent history.

It’s incredible to see the force that Mother Nature has.

82 Million tons of rock fell from Turtle Mountain and partially buried the town of Frank. To stand at the lookout point and view the massive river of rocks is a terrifying sight.

The people who lived on the outskirts of town didn’t stand a chance and were instantly buried by the momentum of the rock plowing through the river.

Just down the road from Crowsnest Pass as you make your way to Pincher Creek, is a turn off for Lundbreck Falls.

I will be honest with you, these falls are really not spectacular in person, but they do make for a beautiful photograph.

When we got there, they weren’t very large or impressive and I told Dave to make sure that he doesn’t take a deceiving photo like the ones we saw online.

We want people to know what they are coming to so that they don’t detour out of their way just for these falls.

As it turns out, you just can’t take a bad photo of the falls.

Sure, they’re small and sure there’s not much to them, but the setting is beautiful and every photo turns out great. Even my iPhone shot made it look great!

It is an area of great historical significance though and many dinosaur and prehistoric bones have been found in the vicinity.

It was just a few km away from here that the most complete specimens of a T-Rex wer ever found and it is now on display at the Royal Tyrrell Museum in Drumheller.

So our recommendation is, if you are driving along Crowsnest Pass and are in the area of Pincher Creek, make sure to stop for a look.

If you are somewhere else that will take you out of the way, don’t make a special trip.

Okay, I’ve been wanting to see this place since I wrote an article called “Strange, Funny and Odd Names of Canadian Towns” that I wrote when I first started blogging.

I hadn't been there at the time, but the name “Head Smashed in Buffalo Jump” definitely caught my attention.

It turns out that this location is not a town at all. It’s a UNESCO World Heritage Site and there is a community of farms and ranches around it, but a town, it is not.

Instead, it is a historical site where early prehistoric plains aboriginal people hunted buffalo.

They would herd the buffalo towards this cliff and create a stampede where they were forced to jump over and fall to their death.

It is believed that this site was used for over 5,700 years and has a pile of bones and artifacts 10 metres thick!

An estimated 50 million buffalo used to roam these planes, but with the white man came the usual death and destruction and within a few years, the buffalo disappeared to the point of near extinction.

You can see buffalo roaming freely just outside the park boundaries of Waterton Lakes National Park in a reserve that you can drive your car through.

It’s very cool to see a herd of buffalo in the semi-wild, but it is tragic to think that they are no longer.

When I think about what North America used to be I envision it being like the African Savannah filled with wildlife.

We had plenty of bears and big cats, buffalo, mountain sheep, wolves and foxes.

It really was an extraordinary eco-system.

Our ancestors took all that away, but it’s beauty still remains in Alberta and with the many nature preserves and conservation areas, you can still catch a glimpse of the historical past and if you are lucky, like us, a cougar or two just may cross your path.

A Spectacular Helicopter Tour with Exclusive Snowshoeing in the Rockies

A Good Ol’ Hockey Game: Skating on Lake Louise, the Most Beautiful Rink in the World