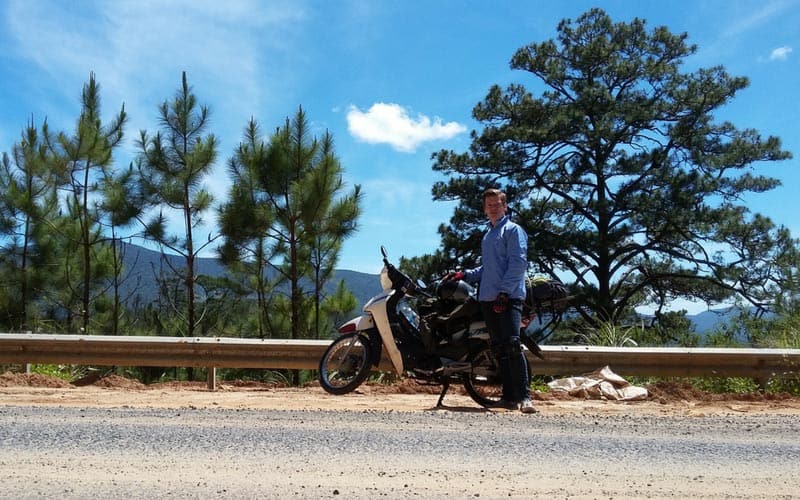 My motorbike tour of Vietnam was a trip that turned out to be all I didn’t want but everything I needed.

I was travelling through South East Asia – my last big roundtrip before turning 30 – and I wanted to make the most of it.

So, following in the footsteps of TopGear, driving a motorbike from Saigon to Hanoi seemed fitting.

However, when I landed in Saigon my experience with two-wheeled motorized vehicles was limited to a day tour in a deserted Cambodian National park, a month earlier.

Before that I had never even sat on one.

It would have been obvious to do something else and continue living a comfortable life, but I knew I had to do this.

I knew life had more to offer than what I could find in my comfort zone, and I made a decision to make a change.

Buying a Motorbike in Vietnam

“I want THAT one!” I exclaimed with joy and pointed to a rough motorbike, that looked like Indiana Jones himself could have driven it there.

“Sure.” The owner replied with ease, barely looking up. “It’s a manual and the keys are in the ignition. Just take it for a test drive”

“I’ve never driven a manual. I’ve actually only driven a bike once before.”

The situation dawned on me as I realized the vast difference between driving an automatic scooter on open roads and a manual motorbike in the infamous Saigon traffic.

The owner looked at me “OK, You can have this one.” He pointed to a semi-automatic bike that looked like a scooter.

Ending up with a Scooter

In all fairness: it’s not possible to buy bikes that are more than 125 CC in Vietnam anyway (which isn’t that much), so there was little difference between the engine power of the two.

But of course, I wanted to look cool.

It’s difficult to be a renegade outlaw when you drive a shining white scooter.

But it’s also difficult when you don’t know how to shift gears, so I set aside my vanity and chose the constructive option.

Gearing up for my Motorcycle Trip

After I bought my bike I read up on what you need in order to drive it safely and realized I was hopelessly unprepared.

Beside the helmet I had gotten with the bike, I had no protective gear.

According to the internet I even needed special boots for driving… apparently upgrading flip flops to sneakers wasn’t enough.

So, I improvised what I could and bought motocross gloves as well as elbow and knee pads in a skate shop.

I doubt they would have made much difference, but at least I looked the part.

First Day of My Great Adventure: Started with a Fizzle

The next day I proudly drove out of Saigon, my phone duct-taped to the dashboard for an improvised navigation device, leading me through the chaos of traffic.

It took me 2 hours to drive 20 km, but I had finally made it out onto the open road and I was ready to gear up!

I put on my elbow and knee pads. I put on my gloves. I put on my 5 USD “genuine” Ray-Ban aviators, found my headphones, pressed play to hear the song I downloaded the night before and kept my hand on the throttle, waiting for the lyrics to start…

“Get your motor runnin’. Head out on the highway” – I did just that.

“Lookin’ for adventure. And whatever comes our way” – I was ready for whatever came my way. I was on the open road and my adventure had finally begun!

“Born to be wild”

Breaking Down Before Getting Started

The motor spattered, heaved for breath and choked. I had driven 2 km and hadn’t even made it through the chorus of born to be wild.

As it turned out, I was not ready for whatever came my way. My adventure seemed over before it had even begun.

But I had made a decision to make a change in my life, and I wasn’t going to let this stop me.

I walked the bike to a mechanic and after a while they got it working again.

The great thing about doing your motorcycle adventure in Vietnam instead of anywhere else is there’s always a mechanic close by because everyone has a bike or a scooter.

It broke down so often I became anxious of driving since I never knew if I would break down in the middle of nowhere.

This wasn’t the adventure I was hoping for, and I wasn’t enjoying the trip at all.

Soon I Settled In

But after a handful of days, I reached the beautiful mountain city of Dalat.

High in the mountains, the weather goes from hot and humid summer to tempered autumn, and the rainforest turns into pine forest.

Everything changes in one hour of driving, and it feels like you’re in a different country.

I found a mechanic who fixed my bike for good and I rode off with elevated spirit, ready to finally start the adventure as I had imagined it.

I drove down the winding mountain roads enjoying the spectacular view of lush valleys, blue skies, steep rockfaces and splashing waterfalls surrounding me.

I loved it… For one hour.

Until I crashed, fell of my bike and injured my arm. Kind locals came to my aid and helped me but I was shocked, scared and just tired of things not going my way.

But again: I had made a decision to make a change in my life, and I wasn’t going to let this stop me, so I continued and drove four painful hours to a hospital in Nha Trang.

Luckily it was only soft tissue damage and not broken bones but I couldn’t move my arm for a week, which meant an involuntary break, and putting my bike on a bus to Hoi An to save time.

Hoi an is beautiful and mentioned by some as one of the most romantic cities in the world.

Situated on a quiet river, with its colorful lanterns lighting up the old historical streets, I see why.

It was a great place to recover but I had a tight deadline and even with the bus I needed to hurry so I pushed my pain aside and once more drove off.

But this time everything was different. I was in pain yes, but the bike was working, and once I hit the highlands of the old Ho Chi Minh highway I witnessed the splendor of Vietnam and why riding a motorbike is such a valuable experience.

Riding a Motorcycle Through Vietnam Changed my Perspective

I’ve spent amazing weeks on beaches, drinking coconuts and cold beer while the ocean rolled in and I felt the warm sand between my toes. I don’t remember those days anymore. They’ve escaped my memory and wandered into oblivion.

But I will never forget being on my own, on a 3-liter motorcycle roaming through the lush rainforest-covered mountains of Vietnam, while the sun was setting and it felt like I was the only person left in the world.

At first the journey sucked, and I hated every second off it, but I endured it and in the end, it paid off.

If I hadn’t endured the pain I would have never seen the wonder of the mountains of Ninh Binh that rise from the rice fields, or stopped in the highlands to watch monkeys jump through the canopy.

I had never driven a bike before but I made a decision to make a change in my life, and got a an amazing adventure out of it, and so can you. So can you.

Your greatness awaits you just around the corner if you will make a decision to make a change.

All the best, you’re the best. Rasmus from EZ Philosophy.