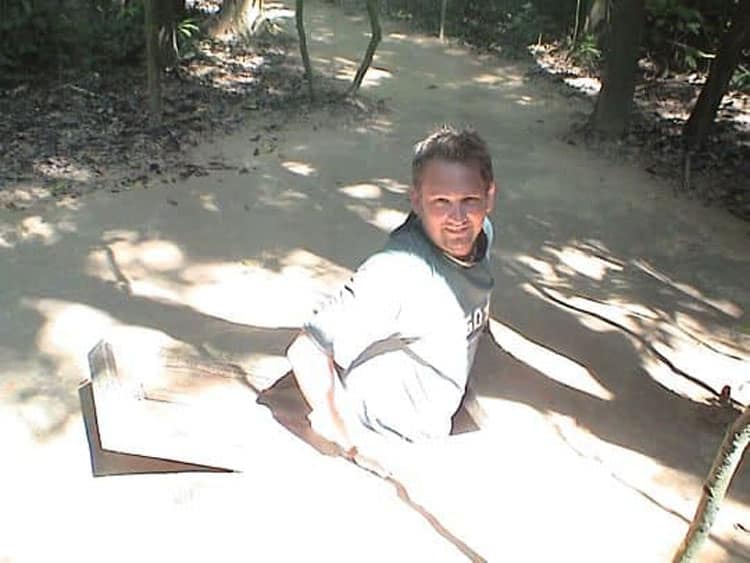 The Cu Chi Tunnels in Vietnam are a fascinating 200 km system of underground tunnels. You can visit Cu Chi from  Ho Chi Minh City on a day tour.

Setting off in a comfortable minibus, we left Ho Chi Minh on a full-day tour to explore the famous battlegrounds of the Vietnam War.

Our tour was spent at the tunnels and ended at the War Remnants Museum. If you are interested at all in the history of Vietnam and the Vietnam War, this is a must add to your Ho Chi Minh City or Vietnam itinerary.

Remember all those old war movies that you watched where the US soldier ran after a rebel in the jungle only to have him disappear in plain sight?

How did the Vietnamese soldier be so clever? Well, a visit to the Cu Chi tunnels explains all that.

It was a masterful tunnel system built right under the noses of the US army.

The American’s knew the tunnels were there somewhere they just couldn’t find them. But not for lack of trying.

Bombing with Napalm and Agent Orange

Agent Orange, napalm, and constant bombing of the jungle were used to try to find the tunnel system that had eluded them.

The jungle was completely wiped out and barren during the Vietnam. War.

It had been ruined by man, but Mother Nature’s is strong and today it is lush and green.

See the Cu Chi Tunnels in style with a VIP Tour that includes a limousine transfer to the tunnels, a cruise on the Mekong River, Lunch and a tour of the tunnels to learn all about the Vietnam War resistance to the US Forces.

Half Day Guided Tour – Get picked up at your hotel for this guided tour of Cu Chi Tunnels where you’ll have a chance to fire an AK 47, see the landscape surrounding the tunnels and explore the tunnel system.

How Vietnam Outsmarted the Americans

Our guide was a former translator for the American. He told the story of the North Vietnamese.

He explained how they could disappear in the jungle by sneaking into cave entrances camouflaged by termite hills being placed on top.

Cayenne pepper would be sprinkled around the entrance to disrupt the search dogs’ senses.

We learned that the Vietcong fought in sandals made from tires to avoid jungle rot. And ran through the jungle effortlessly.

The Americans suffered greatly with wet feet rotting in their boots.

Little did they know that the boots were causing so many problems and sandals were their best defense.

Booby Traps inside the Tunnels

We also learned about the booby traps laid out, waiting for the moment when the U.S. would find a cave entrance.

I can’t imagine what it must have felt like for the American tunnel rats having to go into the narrow openings whenever they did find one.

A tunnel rat was the poor soul who was given the task of exploring a cave when they did find an opening.

They had to go into darkness knowing that bamboo spikes or other painfully slow ways to die were waiting for him around the corner.

What To Expect on the Cu Chi Tunnel Tour

The tour is fascinating. If you really listen to your guide, you will come away with a great deal of knowledge about the gorilla warfare that happened in these jungles.

There are two areas left that tourists can visit. The Ben Dinh and Ben Duoc sections of the Cu Chi Tunnels.

Ben Dinh Cu Chi Tunnels are 50km from Ho Chi Minh while Ben Duoc is 70 km from the city.

We learned how the Viet Cong wore checkered scarves to announce to fellow countrymen that they were fighting for the North without the Americans know.

Farmers would sneak food to soldiers as they were living underground in the Cu Chi Tunnels for years on end.

They had an entire society set up underground in the Cu Chi Tunnels.

Different Rooms and levels of the Tunnel System

They had different rooms for planning and meeting.

There was a complete society underground.

Kitchens were built underground and they only cooked during the early morning. The morning fog hid their smoke blending in with the environmnet so the American forces couldn’t spot them.

The Cu Chi Tunnels even had makeshift hospitals where wounds were tended and children were born.

There was a living civilization struggling and surviving underground for years on end.

How the Vietcong Tracked American Soldiers

And yet, the thing that we found most interesting was when our guide showed us the plants of the jungle.

As you walked by, they would bend and their leaves would curl in the direction that you were walking.

It was so easy to track the enemy once you knew this secret.

There was no walking through the jungle unannounced when the trees were telling everyone that you were there. Incredible.

The highlight of the tour was definitely going into the tunnels original entrance.

We had the option to go into the tiny opening and crawl 150 metres to the next exit.

Only five in our group decided to go for it and it really gave a sense of just how uncomfortable the conditions were.

I didn’t realize I was claustrophobic until a few minutes into our underground journey.

The dim lights went out for a few seconds but we kept crawling in the dark.

Earlier, I saw some lights leading to another direction through another tunnel, and I was starting to panic that we had taken a wrong turn.

The tunnel system is hundreds of kilometres long and the irrational worry took over that I would become lost in the maze.

Check out my Cu Chi Tunnels video of our crawl through the original entrance.

The lights came back on, just in time for 3 bats to fly by our heads.

I was definitely ready to get out of there. I don’t know how anyone could last in there for hours on end, let alone years on end.

We only had to worry about making to from point A to point B so that we could catch our bus back to the city in time for dinner. And that was enough for me

Part of the Cu Chi Tunnel tour is to stop at the War Remnants Museum in Ho Chi Minh City.

We were dropped off at the museum in Saigon and left to wander on our own time. This is where the tour ended, so we had to find our own way back to our hotel. But Ho Chi Minh is easy to get around and this museum is centrally located.

The War Remnants museum is an emotional look at the effects of war.

Horrors of Napalm and Torture

Photos of napalm and victims and acts of torture hung on the walls of the museum reminding us of the horrors of war.

The tools they used for torture and death were on display and devastating photos of the effects of Agent Orange we hanging all over the room.

There are tanks, bombs and planes outside. You will see torture chambers and the cages that POW’s were kept and cells.

It is a difficult museum to visit, I learned a great deal and it is something that should be seen to remind us all of the horrors of war.

What sense is there in all this killing and suffering?

Photographers of the Vietnam War

There is also a display honouring photographers and correspondents who lost their lives covering the war.

It is a moving tribute to the men that kept the world informed about the atrocities going on in Vietnam.

Kim Phuc’s picture is on display. She was the girl in the photo running down the road with her body covered in burns from Napalm.

I had a chance to meet her here in Canada where she now lives.

She travels the world speaking about war, peace and healing through faith. I wrote about her a couple of months ago, in my Girl in the Picture Post.

The Cu Chi Tunnels is a fascinating tour from Ho Chi Min City. It is a little bit on the touristy side, but well worth seeing. To be in a place where a momentous event in history took place is always an intriguing experience.

How to Get to the Cu Chi Tunnels

We recommend taking an organized tour of the Cu Chi Tunnels that leaves from Ho Chi Minh city, but you ca also hire a motorbike tour or private car.

Or you can even rent a motorcycle if you feel confident riding and join a tour once you arrive at the tunnels. 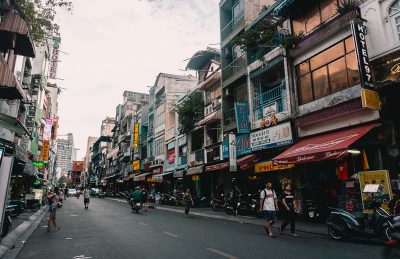 Top Things to Do in Ho Chi Minh City 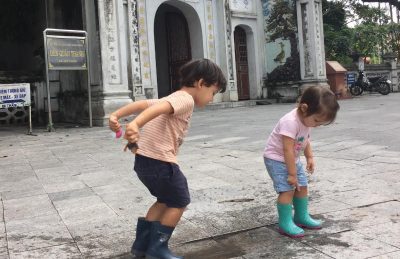 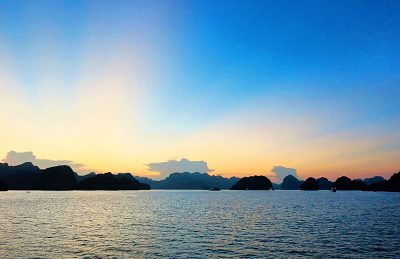 Halong Bay or Bai Tu Long Bay – How to Choose Your Cruise? 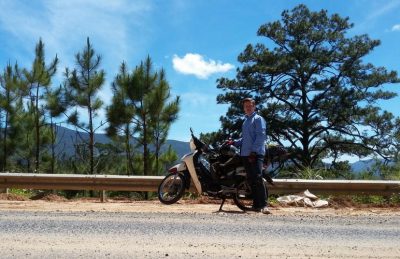 My Motorbike Tour of Vietnam – An adventure like no other