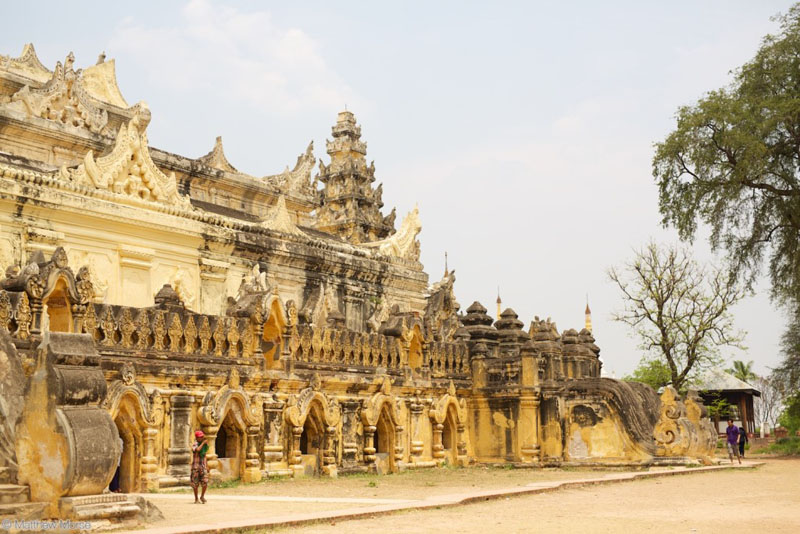 In the center of Northern Myanmar lies the country’s second largest city of Mandalay.

Serving as the last royal capital before the country came under British rule, Mandalay is home to stunning historic structures, a wealth of history, and, like all of the country, wonderful people.

Surprisingly, you won’t find many tourists there.

In recent years, the country’s economic and political liberalization has led to a steady increase in the number of foreign tourists permitted to enter the country.

Today, western tourists certainly aren’t uncommon, but frequent sightings of foreigners are most typical in one of perhaps three or four major destinations – for example, Bagan, Inle Lake, and the capital city of Yangon with its Shwedagon Pagoda.

Even major tourist destinations will generally see mostly Burmese sightseers, with only an occasional international traveler spotted among them.

Throughout much of Mandalay and the surrounding area, I even discovered that I was often a tourist attraction & asked countless times to pose for selfies or other photos with friends and family, just for the novelty of being a westerner!

The most prominent feature of downtown Mandalay is its breathtaking Palace Walls, a huge structure nearly 5 miles in perimeter and surrounded by a moat, which occupies the city’s central tract.

Contained deep within those walls are the Mandalay Palace grounds, which constitute the buildings of the last royal palace of Burmese monarchy.

Although by no means huge, I would recommend dedicating more time to such attractions than you may anticipate, especially if traveling in the hottest months of April and May, as I did.

Temperatures of 112 degrees with a heat index of 115 (46 Celsius) were not uncommon.

As a result, a few hours in the heat warrants a cold drink and some time in the air conditioning before setting out again.

That said, I walked the perimeter of the palace two days in a row and loved it each time, getting a sense of this city and its wonderful people on my own terms.

The heat was not as oppressive as I had feared.

Not far from the palace lies Mandalay Hill, home to several significant pagodas and monasteries, as well as excellent views of the city and its surrounding countryside.

Visiting major pagodas also provides the opportunity to see and interact with Burmese locals in a more natural environment – like you, many come to these temples to relax, spend time with family and friends, and enjoy the view!

An afternoon could easily be spent exploring the various pagodas along Mandalay Hill, many of which see few visitors, despite being located in a central area of a major city. It is almost obligatory to stay and view a sunset from the hill.

Unlike many western countries, it is fairly easy to find a taxi driver to take you up, then wait for you or return at a pre-determined time. In my experience they were always punctual!

As countless guidebooks will tell you, there are a number of wonders to explore beyond Mandalay as well.

Most can be reached on a day trip, and I recommend hiring a taxi to take you – they know the area extremely well, can act as a tour guide, and it spares you having to worry about logistics or getting lost.

Rates are affordable – hiring a taxi for nearly a full day was about $40-50, and included up to 3 passengers.

One of the most famous sites near Mandalay is the ancient imperial capital of Inwa with numerous historic structures.

Getting there entailed a taxi drive, a boat across a river, then hiring a horse and buggy to explore the ruins, which provided for a once-in-a-lifetime experience itself!

After visiting perhaps a half dozen structures, my driver recommended we return to the car and visit the famous U Bein bridge, a long teak foot bridge not far from Mandalay.

U Bein was not only beautiful, it was lively! This is where many Burmese must go to relax on a Friday evening, as we saw plenty of people (nearly all locals) and a slew of beer, ice cream, and other food vendors.

The bridge itself is breathtaking, especially seeing traditionally-dressed monks stride gracefully along.

Go Off the Beaten Path

Visiting Mandalay revived for me one of my forgotten joys: traveling off the beaten path and exploring places organically, without a travel book or foreign guide pointing the way.

This allows you to meet new and interesting people who are often most representative of a country’s diverse social, ethnic, economic, and religious composition.

In my opinion, there are few better cities in which to do it, especially if you’re up for a little adventure, unpredictability, and more than a little hot weather!

The Realities of Traveling in Myanmar