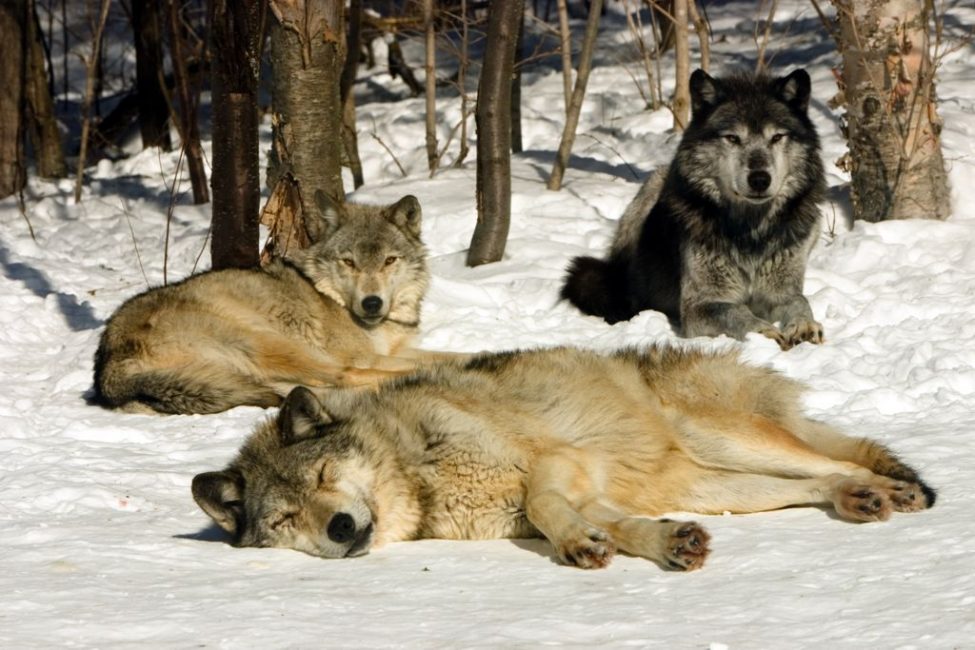 About 3 hours north of Toronto way up in Central Ontario is one of our favorite places in the Province. Haliburton Forest is a nature lovers dream.  A place for hiking, mountain biking and canoeing in the summer and cross country skiing, ice fishing and dog sledding in the winter.  But it is the Haliburton Forest Wild Life and Reserve which houses the Grey Wolf Sanctuary that has kept us coming back.

The Grey Wolves roam free in the Sanctuary 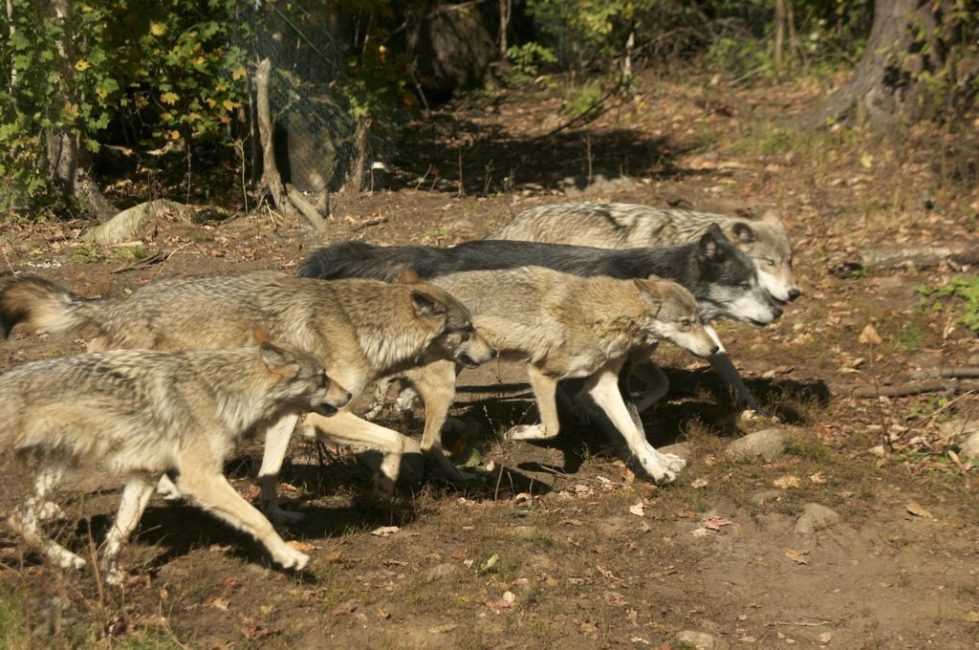 Meet the Pack of Haliburton Forest

Witness and learn about the pack of Wolves that live and roam freely on a 15 acre reserve set aside for them.  This Grey Wolf Sanctuary sits within 70,000 acres of protected hardwood forest at The Haliburton Forest and Wildlife Reserve. 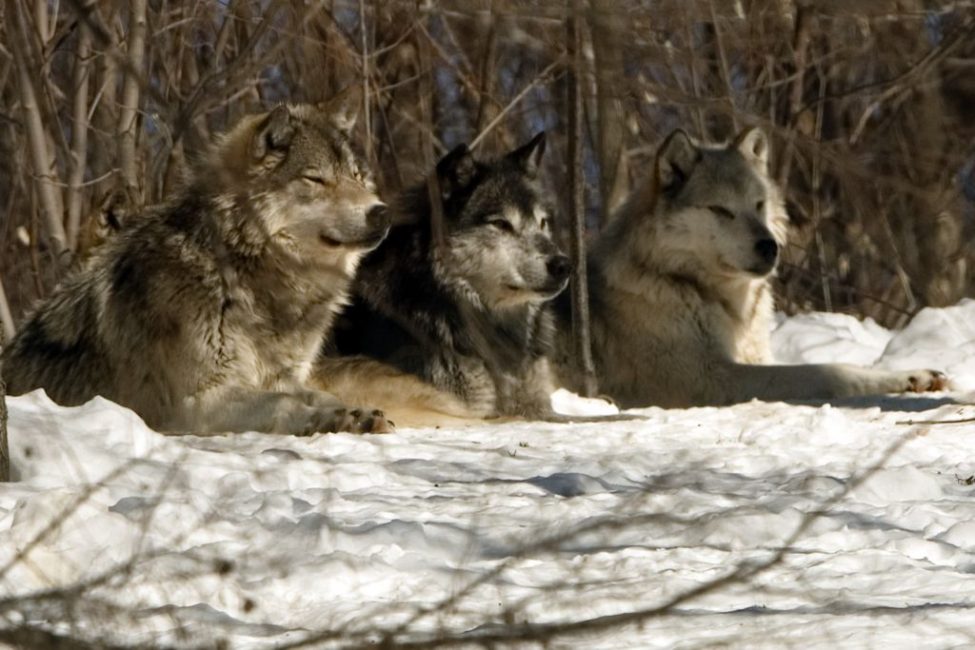 There are a couple of wild packs and lone grey wolves that roam the forest as well, but you will have a better chance of spotting these beautiful canines in their natural habitat at the viewing area for the pack of protected Grey Wolves.  It is a long story as to why these wolves are protected dating back to 1977 in Pennsylvania. 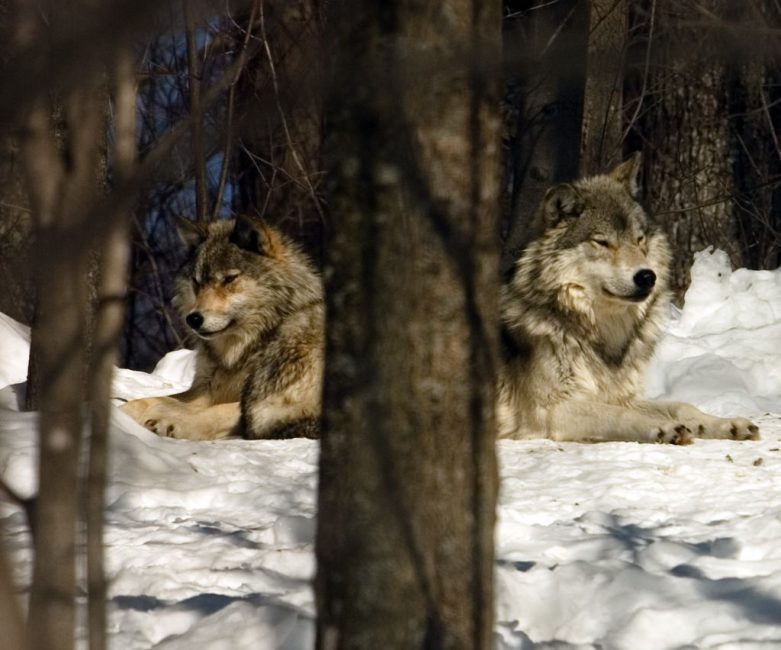 You can read about their story at the website HaliburtonForest.com and find out how the wolves came to Ontario in 1992 living on through new litters and pups.

We have visited the Grey Wolf Sanctuary twice. Once in Winter and Once in the Fall.  We were lucky to be able to see them both times.  Viewings are not guaranteed as the wolves are free to roam wherever they choose. Their daily lives are disrupted as little as possible making it a reserve that I support wholeheartedly. 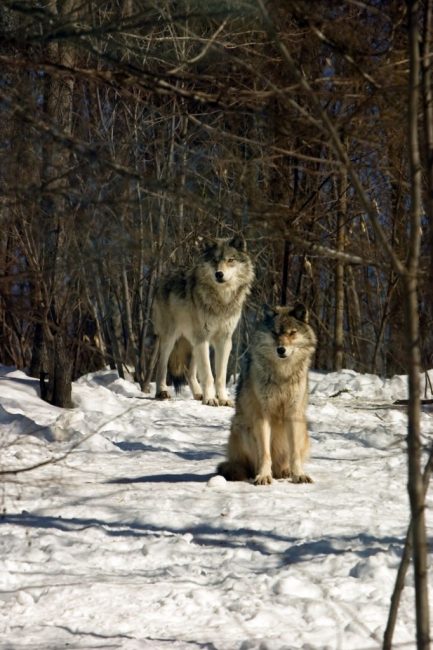 Free to Roam the Woods

Tourists can only view the wolves from inside a glass enclosure overlooking the feeding area.  You are asked to remain quiet as you observe the wolves go on with their day.

If you time it right, you may be treated to watching them feed. Normally they are fed beavers, but we happened to be there on a day when they were fed a deer.   Two workers brought out a deer killed by traffic for the pack to feast upon. Grey Wolves may look cute and sweet, but to see them eat as a pack reminds us all how wild they are.  All animals are dead already for feedings, we were told mostly by roadkill or by local trappers.  They wolves are still very vicious when they eat and it is a fight to try and steal a morsel from the Alpha male. 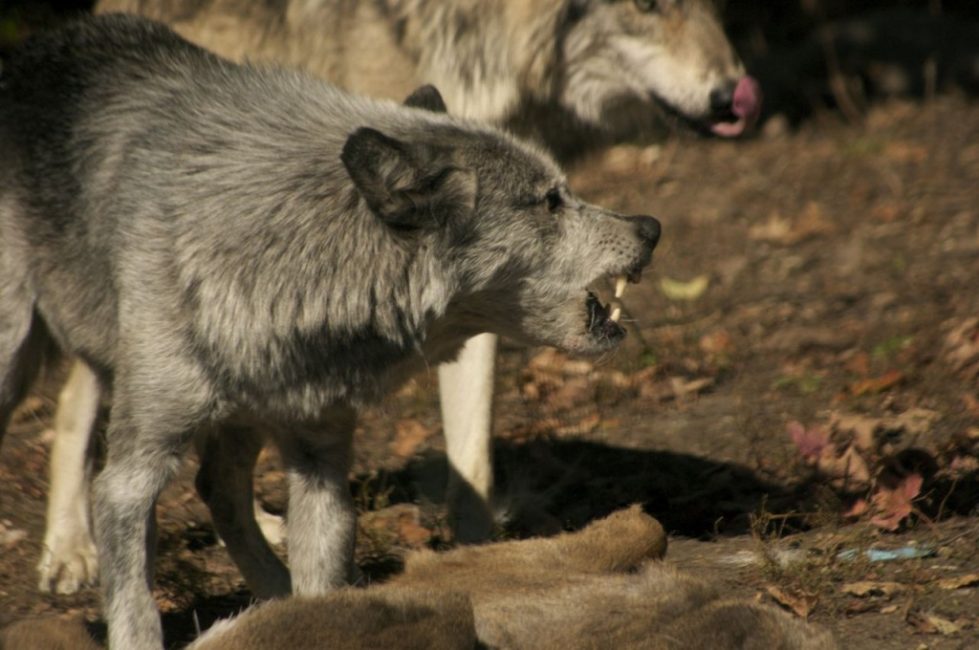 We learned a great deal about the hierarchy of the pack.  The Alpha Male runs the clan along with his chosen Alpha female.  They are followed by the Beta male which is second in command and then the rest fill out the list until the poor Omega wolf.  It is difficult as a human to watch the Omega.  It is the weakest of the pack and it is severely bullied by the other wolves.  It is the last to eat and it stays to itself while the rest of the pack sleeps and plays together. 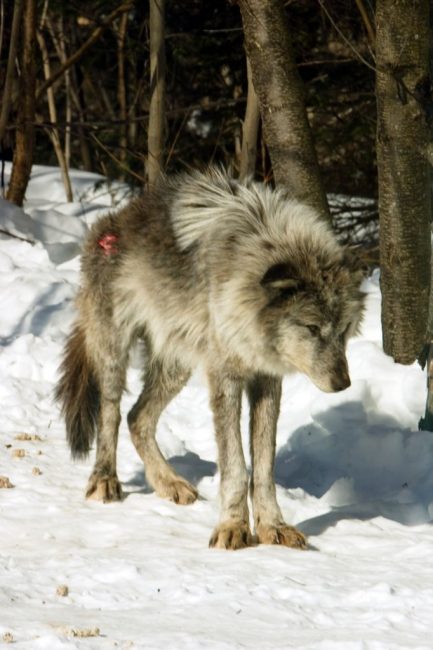 The sanctuary does not intervene as this is the way of the wolf and it is not for we humans to decide how they should live.  Eventually, the Omega will be killed by the pack or it will go off by itself to die or as we were told, sometimes they become so sick that they need to be euthanized by staff veterinarians..  So sad, our heart breaks and we just want to save it.  But to take the omega away will only make room for another Omega to be chosen, so there is nothing that we can do. 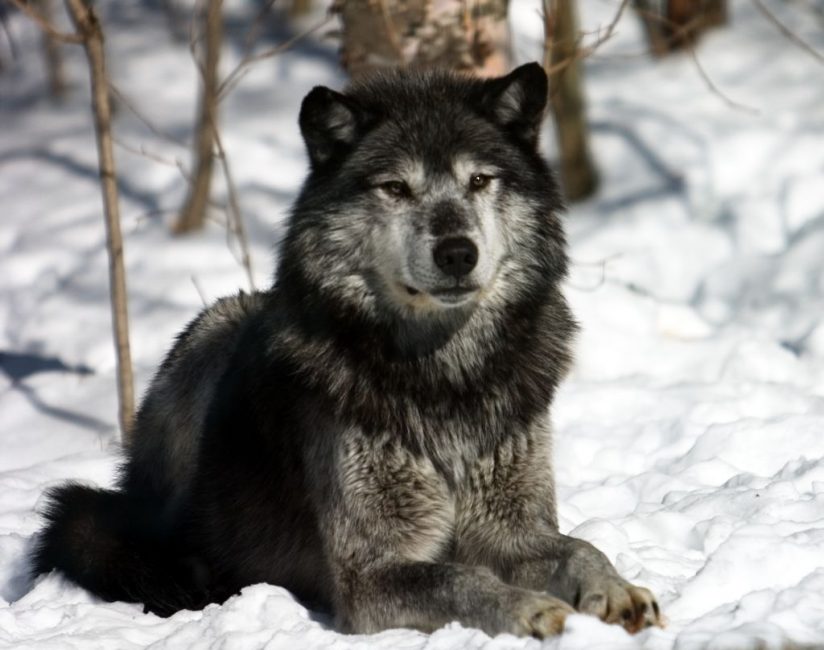 These grey wolves are left to themselves other than at feedings.  Eventually, one of the younger Beta Males and Females will overtake the Alpha's and the cycle will continue.

Another  great thing that the Wolf Sanctuary is working on is dispelling the myths of the Big Bad Wolf.  It is a fact that wolves are more afraid of humans that we are of them.  Wolves have had a very bad rap in history and they have been ruthlessly slaughtered by humans.  Their numbers are slowly coming back, but people seem to be no less afraid of them.  At the centre, they informed us that their is no evidence of a healthy wolf ever killing a human and wolf attacks in are very rare. Often when there is a wolf attack it is a rabid wolf or wolf/dog hybrids.   Wolves are more likely to flee when humans approach. 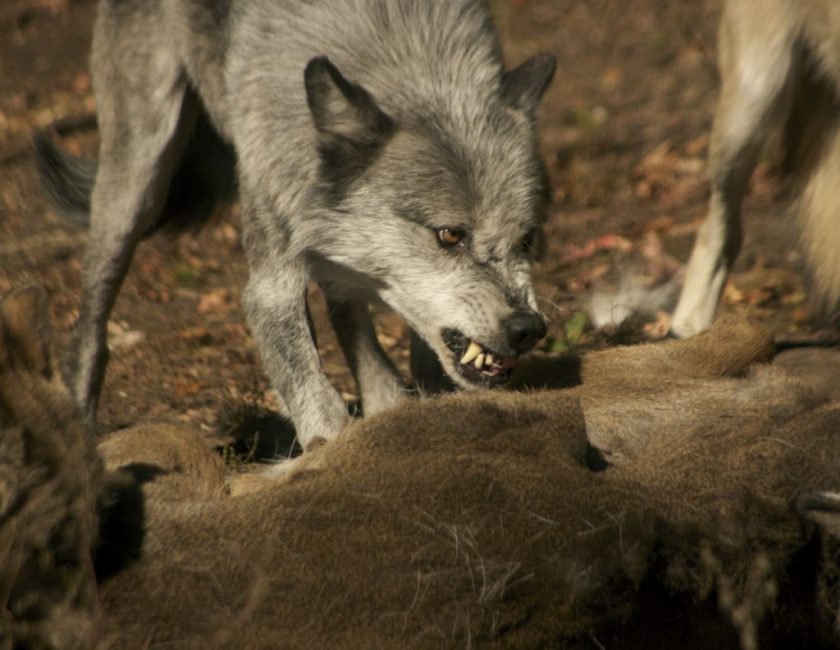 Looking Vicious as they Feed

My rule has always been, when you are in the wilderness, you are in the environment of wildlife.  You are in their homes.  You have to take responsibility for yourself and take the proper precautions.  I don't understand why the human race feels entitled to every piece of land on earth and if an animal attacks while defending their territory or their young, we get our noses out of joint.  We encroach on their environment and leave them with less and less habitat, but heaven forbid if they wander into our streets which used  to be their stomping grounds.

O.K., enough of yet another one of my rants.

Wintertime is also a great time to visit the grey wolves.  The location of the viewing area is perfect as the sun beats down on a slope that the wolves love to bask in.   It is easier to see them too as the leaves on the trees don't obstruct your view. 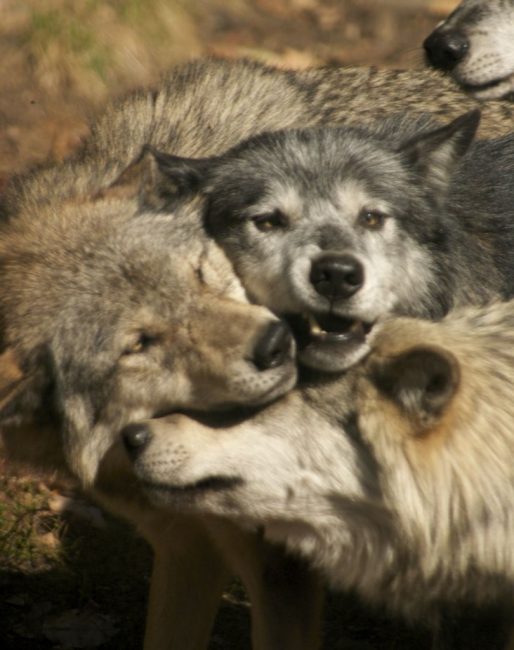 Some Cuddle Time with other Grey Wolves

It is only $9.00 to visit the Grey Wolf Sanctuary.  It is worth it to take a day or two and stay up in Central Ontario. It is a beautiful location consisting of 60 lakes and thousands of acres of forest.  It is a wild country where moose and bears roam freely and you will see otters, deer, porcupine, grouse and great blue herons and many more.  Stay in rustic cabins, pitch a tent or find a nearby resort.  You can find something for everyone in Ontario. 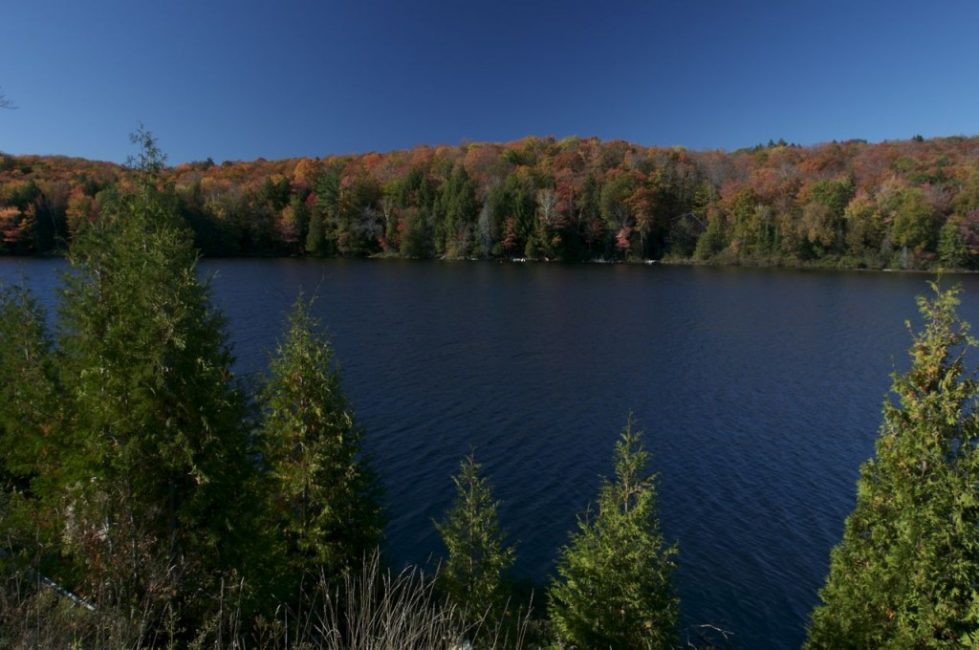 The Fall Colours on a Lake in Haliburton