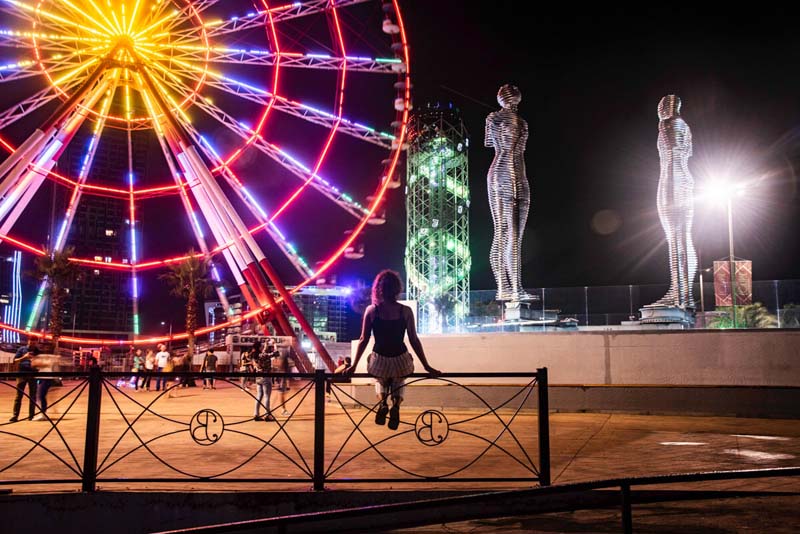 Located on the shore of the Black Sea, the relatively new city of Batumi is the prime tourist destination in Georgia, for both locals and Russians.

Batumi is home to the finest beaches in Georgia (if we don’t count Abkhazia as part of Georgia), the best dining scene and the craziest nightlife.

Loved by many, but hated by others, Batumi may not be the ideal backpacking destination you dreamed of when planning your trip to Georgia.

But beyond all the resort life, the city has surprisingly managed to keep a certain charm and character.

BATUMI TRAVEL GUIDE: THINGS TO DO AND MORE

Batumi, the gambling resort capital of the Black Sea, home to the largest amount of trashy tourism I have ever seen in the region.

A city where it is impossible to walk along the promenade without hearing the horrendous, loud music coming from the absolutely tasteless beach bars.

A city where you are constantly seeing half-naked, pot-bellied Russian tourists getting drunk at whatever time during the day.

A city which, despite belonging to one of the poorest countries in Europe, spends millions in building extravagant, pointless monuments.

Batumi is a Dubai-wannabe, the antithesis of everything we believe in, our principles and, at first, not a place we'd like to travel to.

But guess what: We liked it!

OUR PERSONAL TAKE ON BATUMI

Yes, we actually liked it because we like weird stuff and Batumi has a hell lot of it.

The truth is that we didn't like it because of its resorts, casinos and crazy parties but because we managed to see it from a different perspective, like how can the most traditional country in Europe build a massive skyscraper with a Ferris wheel attached to it.

We liked it because, due to its proximity to Turkey, Batumi has significant cultural differences, ranging from a large Georgian Muslim population to plenty of Turkish-style cafés serving Turkish coffee and food.

We liked it because the Old City of Batumi has a real soul, and the youth generation living there are modern, Tbilisi-like minded people.

During the Soviet Union, the resort capital of the country used to be Sukhumi.

It was the capital of the unrecognized Republic of Abkhazia, a city and a region that received hundreds of thousands of tourists coming from all over the USSR including the Soviet elite.

Following the Georgian-Abkhazian war, shortly after the USSR dissolution, and its independence, Georgia decided to move the resort capital to Batumi.

Then the real building boom starting in 2009.

Furthermore, besides being Las Vegas of the Black Sea, Batumi has a history to tell.

In fact, with its natural harbor, this used to be a Greek trading colony and actually, Batumi comes from the Greek words bathys limen, which literally means deep harbor.

Batumi isn't our favorite place to travel in Georgia but we seriously enjoyed our time there, and we strongly recommend visiting it.

Because Batumi is a weird anthropological study and experience, so different from anything you have seen before.

This guide contains everything you need to know to visit Batumi, including things to see and many other tips.

I think Batumi can be visited all year long.

If you are interested in the beach and swimming, you should come in summer.

If, like us, you are interested in just hanging around, then you can come at any time.

Actually, outside of summer (shoulder season) would be the ideal time because it is less crowded, less hot, and prices are lower.

HOW TO GET TO BATUMI

If you are traveling from Tbilisi, the best way to get there is by train but, in summer, remember to book a few days in advance because tickets sell out quickly.

The train leaves from Station Square, and it is a double-decker, modern train. A 2nd class ticket costs 25GEL, and 1st class 60GEL.

The train leaves you at Makhinjauri, which is 4km away from Batumi. A taxi would cost you 10-15GEL but, if you go out of the station and cross the main road, there is a bus that passes continuously and drops you off downtown.

How to buy train tickets: You can buy them at the train station one or two days before departure but the easiest way is to buy them online through this website.

Sitting on the shore of the Black Sea, Odessa is one of the largest cities in Ukraine, and a city that is connected to Batumi by ferry.

There are 2 companies offering the ferry service, Ukrferry and Ferrysped, and detailed schedules may be found on their websites.

A ticket costs roughly 100USD and the journey takes around 24 hours but, depending on the weather conditions, it can take more, sometimes 1 or 2 additional days. This means that the ferry journey is not for those who travel on a tight schedule.

Batumi has an international airport with several daily connections to Middle Eastern  cities, such as Dubai, as well as other destinations in Europe.

HOW TO GET AROUND BATUMI

To be honest, everything within Batumi is in walking distance, so you don't really need to take public transportation, taxis or anything like that.

The only reason to use it would be if you wanted to go to the beach and botanical garden in Mtsvane Kontskhi, which is a couple of kilometers away and, in that case, you can take a marshrutka for 1 or 2GEL.

THINGS TO DO IN BATUMI

Besides hanging out in the Old City, which is what I recommend you do in the evening, Batumi is about walking around and visiting the several weird monuments, buildings, and European-like squares.

The promenade is dominated by an extravagant 130-meter tower, wrapped up in the Georgian alphabet.

The big ball on the top is actually a fancy, rotating bar/restaurant.

I bet it is expensive but you can go up and see it for yourself.

Something about fake cities is that they name things after places they'd like to be related to.

Europe Square in Batumi is a clear example of this.

In fact, with its majestic buildings and architecture, Europe Square really looks like a square from Central Europe.

By the way, this is the center of town and a convenient spot to start your self-guided walking tour.

Another example of an area which has been built ad hoc for tourists.

Of course it has some particularly kitsch architecture, it has expensive restaurants and an Irish Pub.

4. Skyscraper with a Ferris wheel

That's the most bizarre building in Batumi and one of the weirdest I have ever seen.

Basically, this is a very tall building that has a giant Ferris wheel attached to the very top.

It belongs to Hotel Meridien but it is not open yet and has been under construction for ages.

For only 5GEL you can go up this 55-meter Ferris wheel and see Batumi from above.

6. Love statues on the boulevard

In any case, love statues featuring hearts and stuff like that are all over the city, the most interesting ones being along the boulevard.

This metal, moving statue is pretty weird and draws the attention of hundreds of tourists.

Basically, it is based on the novel of Kurban Said, the local version of Romeo & Juliet, the love story of a Christian Georgian girl and a Muslim Azeri boy.

This is no regular botanical garden but, apparently, it has one of the largest varieties of flora in the world, including Mexican and Japanese gardens.

Like I said in the transportation section, it is a bit out of town, 9km exactly.

To get there, take a marshrutka from Chavchavadze street, very close to the center. The entrance fee for the garden is 15GEL.

In my opinion, this is the best Batumi beach, which is right next to the Botanical Garden.

We spent the full day in this area, starting with the Botanical Garden, followed by drinking beers at one of the beach bars and then passing out on the sand.

Apparently, this 25-meter towers spills actual chacha every day at 7pm, for about 10 minutes, but we were there at that time and nothing came out.

Then we learned that until recently, it spills just once in a while, on selected dates.

This is a regular mosque like any you may see in Turkey but it is quite an unusual building for Georgia.

And it always receives the large community of Muslim Georgians that characterizes this region.

WHERE TO STAY IN BATUMI

Hostel in Batumi – One of the top-rated hostels in town, with a friendly backpacker atmosphere, good facilities, and the best location.

WHERE TO EAT IN BATUMI

Do you know the popular cheese boat named Khachapuri Adjaluri?

Well, Adjaluri is named after the province Adjara, whose capital is Batumi. Yes, you guessed it right, the Khachapuri Adjaluri comes from Batumi and here you can find the finest in the country, therefore in the world.

This restaurant is renowned for serving one of the very best.

They also opened a Retro restaurant in Tbilisi, in Sarbutalo, which was right next to our house.

I can confirm that it is the best Khachapuri Adjaluri I have ever had.

I recommend this place because they served us good quality local food from the region and it was busy with locals.

For Georgian standards, it is a bit pricey and I think we paid 35GEL per person, including some wine.

Heart of Batumi  (Georgian food with an international twist)

Another great place frequented by both local and tourists.

From Sudan to Pakistan, Syria and Central Asia, for the last few years, Joan Torres has been traveling non-stop to real off the beaten track destinations which don’t tend to be on most traveler’s bucket list.

He tells about it on his blog Against the Compass, where he writes extremely comprehensive and useful travel guides, as well as inspiring travel stories.

Enjoy this Batumi Travel Guide? Save it to Pinterest for Future Reference.

10 Places to Visit in Bulgaria

17 Exciting Things to do in Moscow