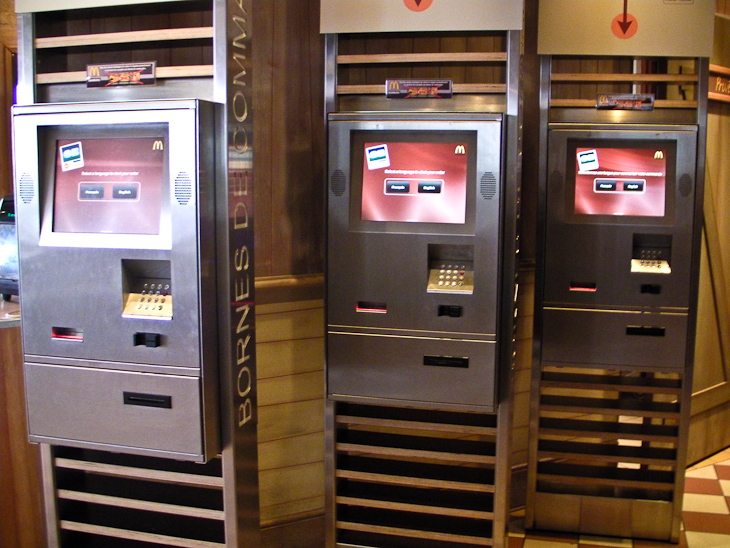 How can you love McDonalds in France? It is a country renowned for its rich cuisine and fine wine.  Stepping foot in a McDonalds is like thumbing your nose at the French heritage.

But hear me out.

There is nothing that we love more than sitting in an outdoor cafe, drinking wine and sampling rich cheeses and cured meats.

Like the French, we have a love affair with their food.

We couldn't wait to peruse the menu of a restaurant and choose something mouth wateringly delicious.  The prix fix menus were our favourites as we could sample a few dishes at a time.  Oh yes, we loved eating in France. 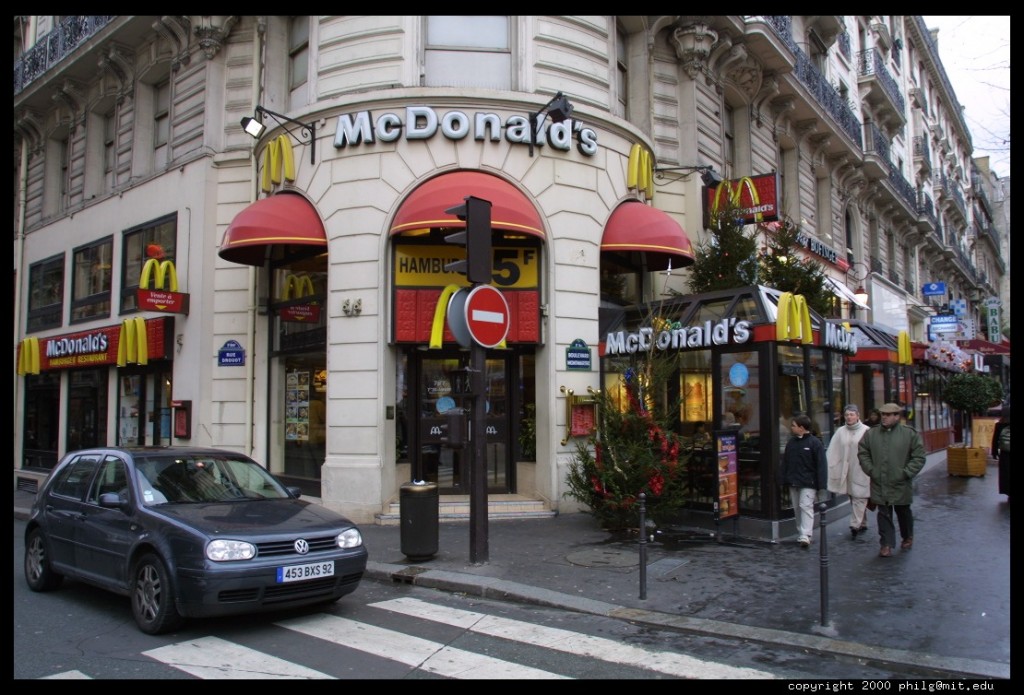 The last time we were in France was in 2002.  McDonalds hadn't caught on in Europe as it has now. When we entered a MickyD's in Paris, it was void of people and had different items on the menu than we had in Canada. It just wasn't right.

Today, it is immensely popular and filled with crowds. Families sit around the tables for their “meal out” just like my family did in the 70's. Going to McDonalds then was an event for us and it looked as if it was an event for some of these families in France.  We saw several generations of people sitting together enjoying cheeseburgers and Big Macs.  It was nice.  It gave me a warm and fuzzy feeling seeing people out enjoying themselves together.

While it is not an event for us we do enjoy the odd Big Mac every once in a while.  McDonalds isn't our first choice for a meal out but we are not against it.  We pop into one in every country that we visit.  India has some great vegetarian choices.

So why did we like them so much in France?

1. Free and Clean Toilets – McDonalds has the same standards around the world.  We knew that if we had to go to the bathroom, we could duck into a McDonalds without fear of having to pay a fee or buy a coffee.

There aren't a lot of places to go to the bathroom in France. (at least that we could find)  In Canada, we have fast food and Tim Hortons donut shops everywhere so we never really have to plan our pee stops.

We can always duck into a place to relieve ourselves.

Many times in Paris, I would be stuck walking for far too long with a full bladder looking for a public toilet or place to go.

When I saw the Golden Arches, I breathed a heavy sigh of relief. 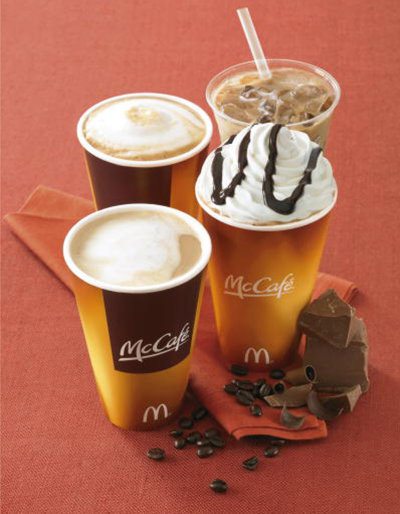 2. Coffee to go – I don't think it is part of the French culture to drive or walk with a coffee in hand.

It is a tradition to sit down and savour a rich and delicious cup a joe while visiting with friends and soaking in the atmosphere.

Our society unfortunately is always on the go.

We rented a car in France and as Canadians, we are conditioned to drink a coffee while driving.

At home, we can't go on a road trip without a stop at Tim Hortons.  It isn't the best coffee on the planet, but it is a Canadian institution.

They have brainwashed us well.

We can't go anywhere without hitting a drive through and ordering a “Large Regular.” (large coffee, one cream, one sugar)

How were we supposed to drive through France without a coffee to pass the time?

Luckily, McDonalds sells coffee to go.  Sure, we had to order two cafés each because they are much to small for a road trip, but at least we had our java to keep us occupied on the road. 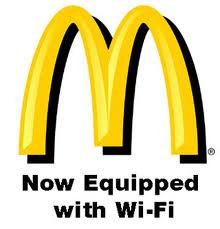 3. Free Wifi – As travel bloggers, we have to stay connected.

It can be difficult to find affordable wifi and we could always count on McDonalds.

We could bring in our laptops in with us, find a quiet corner, plug in to their power outlets and work.

All we had to do was buy an affordable meal, coffee or ice cream and we could work for hours on end.  People came and went and nobody even noticed that we were there.

4. Parking Lots – We don't know Europe well and we don't know all the little tricks to find free parking.

When we entered a new town, we would have to find a public parking lot and pay for our parking.

If there was a McDonalds somewhere, we could park our car for a little bit and go for a walk to explore.

We didn't leave it for hours on end, but at least we could stretch our legs, get our bearings and decide if we wanted to stay in that town. 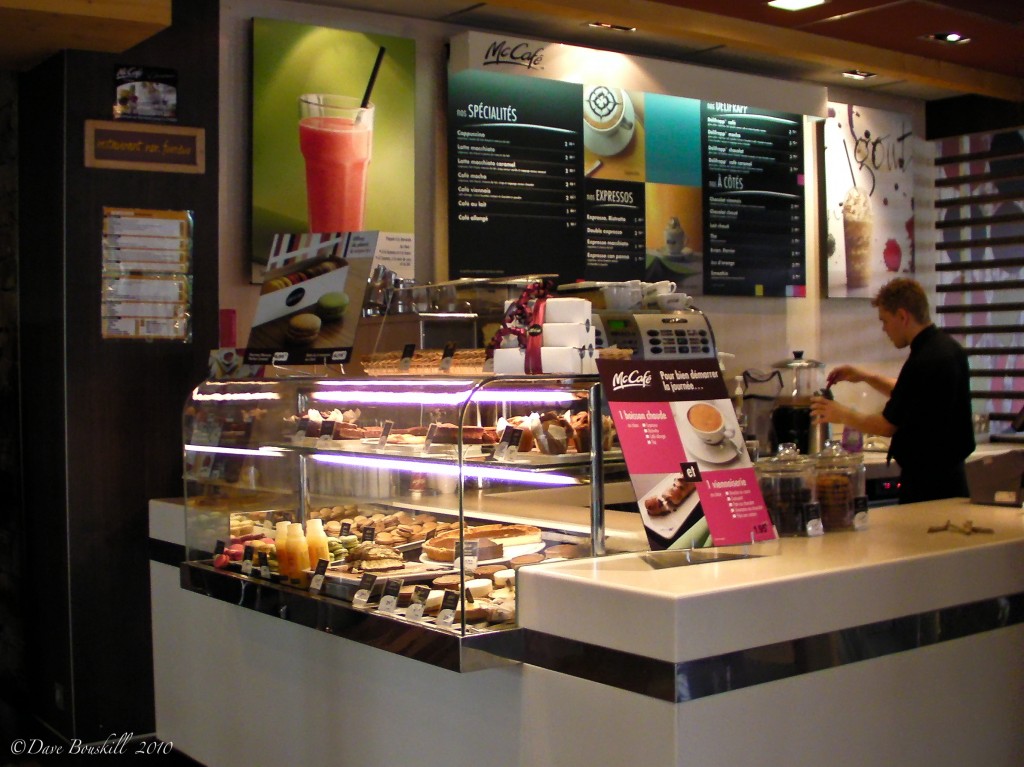 5. McCafés – We hear that these have come to North America, but we haven't found them yet.

The pastries were delicious and the cappuccinos were rich and creamy.  The McCafés brought a certain class to McDonalds.

They served coffees and pastries on ceramic plates, they took their time making a proper café au lait and they looked good.

The McCafés have their own little section of the McDonalds we visited that made you want to sit back and relax for just a little while longer than you would at a regular McDonalds.

6. Breakfast – Many of the places where we stayed in France only offered breads and if we were lucky a little bit of cheese for breakfast.

If we were lucky we could get a little cereal and some jams.

While it was great to have a continental breakfast included, we missed our eggs.

McDonalds has egg McMuffins just like at home and we would stop in and grab a couple.  It was the easiest and most affordable way we could find to get our eggs.

7 – ATM like Machines – We got a kick out of these machines.  You may not believe this, but sometimes we would enter McDonald's and the line up would be huge.

It was massive and chaotic.

I can't believe that we didn't get a photograph because it is the opposite of what we expected.

To handle the large crowds, McDonalds has machines placed out front to pre-order your food.  You just walk up to the counter with your ticket, and your food is all set to go.

8. Cheap and Easy – Just like in Canada, McDonalds is a cheap alternative.  Sometimes it can be exhausting trying to find a place to eat out.

Especially on a heavy driving day.  McDonalds is an easy choice.  It is also fast.

We could pop in and get out fast when travelling from one city to another.

We entered some cities where we couldn't find a restaurant within our budget.

While we mostly shopped at supermarkets when this occurred, sometimes we would just hop into McDonalds to grab some fries to tie us over until we could bring back some food to our campsite.

Also, may times in France, restaurants wouldn't open until 7:00 pm. But we were hungry at 5:00, sometimes McDonalds would be the only thing open.

WebsiteFacebook
You are Here: Home » Europe » France » Why We Love McDonalds in France