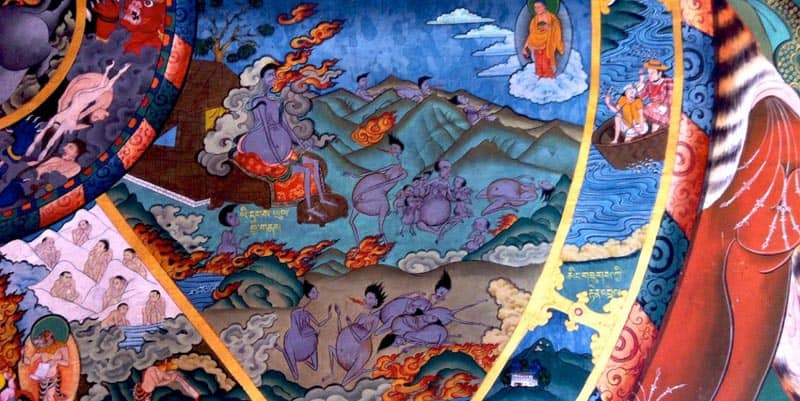 Bhutan is a tiny Buddhist country nestled between Nepal, India, and China.

In an effort to preserve its unique culture and religious traditions, it has adopted a “high value-low volume” philosophy toward tourism.

But since tourism is a crucial source of income, Bhutan is expanding its tourist infrastructure as quickly as it can.

I've rounded up my best cultural experiences in Bhutan.

If you’re not an Indian national, you must travel with a government authorized travel agency and pay the daily stipend of $250.00 per person, 1/3 of which goes directly to the government.

When it opened its borders to tourism in 2001, Bhutan also let TV and Internet access into the country.

Bhutanese youth quickly adopted this new media, and you will now find them in the capital city of Thimphu on cell phones and sporting western-style clothes.

In 2008, the country became a two-party democratic government but still maintains its state-sponsored religion.

Bhutan is well known for its philosophy of “Gross National Happiness.”

The goal of which is to preserve the peace and happiness along with the security and sovereignty of the nation.

Also see: How Hard is it to Climb Mount Kilimanjaro?

Bhutan is broken into three regions: west, central, and east.

The western side of Bhutan is the most traveled and developed with the international airport in Paro and the capital city of Thimphu.

The high plains of central Bhutan are home to the spiritually significant Bumthang valley, which houses cliff-side temples and sweeping fields of wheat, barley, and potatoes.

Eastern Bhutan is a mountainous region where towns cling to the hillsides and roads are carved out of cliff edges along raging rivers.

These five adventures are a good starting point for any trip to Bhutan. They offer a unique perspective on the people, culture, and landscape of the country.

No trip to Bhutan is complete without a hike up to the Taktsang Monastery, or “Tiger’s Nest.”

It’s built into a series of caves that, when viewed from afar, looks like a man’s face. Specifically, the Guru Rimpoche’s face, an early Buddhist who journeyed from Tibet and meditated at the caves in the 8th century.

The monastery’s perched high on the mountainside, and you can hike or take a horse part of the way up.

Where is Tiger's Nest Monastery?

It is located just outside Paro, and is usually visited after adjusting to the high altitude of 2133 meters (7,000 feet).

The first views of the monasteries are from a ledge overlooking a ravine and river, which is also the last leg of hike.

To reach the monastery you take a series of stairs down the cliff side across the falls and back up to the monastery.

Photography and bags are not allowed into the monastery, but the views are indeed spectacular, and the wafting smell of butter candles and murmuring of monks transports you to another world.

A Dzong is part fortress, monastery, and government office.

Dzongs are the focal point of each regional city built for defense.

These impressive buildings straddle rivers in the west and cling to mountain tops in the East.

The interiors are elaborately painted with religious and inspirational imagery like the wheel of life – a symbol that illustrates the four truths of Buddhism and the path to liberation.

Since religion is statesponsored, the Dzongs are kept in pristine condition and are also the center of government affairs.

On my visit, the Queen mother was visiting the Paro Dzong to give offerings.

It was also a full moon day, which is holy to Buddhists since they believe Buddha was born and enlightened on the full moon.

Since I was traveling in November (the end of the tourist and festal season), the Dzong’s were mostly deserted and I used the silence to reflect.

In the Western part of the country, the Dzongs sit along rivers and overlook fertile valleys—usually with watchtowers perched on the ridges like the Paro Dzong.

As you move East, Bhutan becomes increasingly mountainous and the Dzongs are built on defendable outcroppings that provide good views of surrounding mountains like the Trongasa (pictured above) and Lhuentsi Dzongs.

Festivals make for the ultimate cultural experience in Bhutan.

The season is rich with color, dance, and iconic animal masks. Festivals are called  “Tshechu,” meaning “tenth day” of the lunar month.

The annual festivals are held across the country at various temples and Dzongs.

The locals dress up in their finest clothes, and the festival dancers swirl, spin tales, and give blessings.

In the larger towns, monks do most of the performing, but in the small villages the local men will assist.

The two most attended festivals are Paro Tshechu and Thimphu Tshechu.

For a less crowded experience, it’s worth the hike through mountain roads deeper into Bhutan to the more remote villages.

There are dozens of festivals, from the “naked” festival in Mongar to the “coming of the black necked cranes” festival in the Phobjikha Valley.

Work with your guide to arrange the details, and research the festivals that you might be interested in before booking your travel! Official Bhutan Tourist Website: www.tourism.gov.bt

Witnessing the daily lives of Bhutanese farmers and staying the night on a farm is a special experience.

You will have the opportunity to take the traditional stone bath, assist in preparing food, and sleep under the rafters of an ancient farmhouse.

I stayed at a local farm in the Paro Valley, where I helped the mother of the family prepare a traditional Bhutanese meal.

One of the signature dishes is called “Ema Datshi” or “Chile Cheese.”

Chillies, butter, and cheese are cooked down into a mixture that serves as the main side and condiment in Bhutanese food.

It is paired with a variety of dishes. We also made a chili and beef stir fry, turnips, potatoes, and heaps of rice.

We washed it down with the salty, fatty butter tea.

Bhutan’s remote location and dramatic landscape makes it perfect for the adventure seeker.

Head off the beaten path and you can reach the remote villages and fascinating cliffside monasteries on short day hikes or longer treks.

There are many treks to take in the Bumthang Valley.

I went up to the Luk Rawa temple through the small farming village of Lusbe.

The temple is stuck to the side of a cliff, and is where the now infamous Guru Rimpoche had once meditated and left his footprint in the stone face.

As Bhutan is at the base of the Himalayas, you can also try rafting.

The rivers surge down the Himalaya, carving deep ravines and weaving through the mountain landscape into the plains of India.

On my journey across Bhutan, I took the less eventful rafting excursion down the Mo Chhu river.

I floated passed the rolling mountainside and fields and saw a variety of fish and fowl in the bright high altitude sun.

End the rafting excursion as you pass directly under the bridge that leads to the Punakha Dzong, which sits at the joining of the Mo (mother) and Pho (father) Chhu river.

More extensive treks and hikes can be planned out carefully in advance with your guide. Depending on the season, your travel scenery will change dramatically.

In the spring you’ll find bright flowering hillsides and periodic showers with some cloud cover. F

all is the dry season, and you will have clear skies and views of the Himalayas—it’s also the height of festival season.

If you do not have the time to travel across the entire country, spending just four or five days in the Paro Valley viewing festivals and hiking to the Tiger’s Nest will give you a peek into this fascinating, and once isolated, country.

Bhutan – A country in Transition

Bhutan is a country in transition and you should be prepared. It is balancing western influences while still holding onto its core tradition and religious beliefs.

As I traveled across the length of the country I saw great change: the rough infrastructure was being dramatically improved with road widening, and there are new western-style hotels and massive hydroelectric projects.

So take the opportunity while you still have it and visit this special country before its new roads, and newly wired citizens adopt the lifestyle of the western world.

Read Next: Tips for Trekking to Mount Everest Base Camp