Top 10 Things to Do in Israel

Israel is loved by many travelers regardless of faith or culture. There are many things to do in this tiny country; I’ll show you my top 10 things to do in Israel. With a lot of concerns for safety when traveling there, I have to say that I felt safe and would recommend traveling to Israel to anyone.

Top 10 Things to Do in Israel

Float in the Dead Sea

The Dead Sea is the lowest point on earth, and it is rich in minerals that are good for your body. Floating in the Dead Sea is an unforgettable experience that cannot be described.

Make sure to rub on some of the mineral-rich mud which you can buy for a few shekels. Ein Bokek is a nice little town right at the Dead Sea with some good hotels (which are very expensive) and a few good-sized public beaches.

You can also float in the Dead Sea of Jordan

Tour the Old City of Jerusalem

During our 10-day trip to Israel, we spent the majority of the time in Jerusalem. There are a lot of things to do in Jerusalem. One of those is touring the Old City of Jerusalem.

There are many key sites that are significant to various religious and cultural groups, including the Church of the Holy Sepulchre, Dome of the Rock, and the Western Wall (also known as the Wailing Wall).

I strongly recommend taking a tour through the holy city. Some companies offer a 2-hour guided walking tour for “free” (tips only). You can ask about this service at one of the information booths inside the Old City or at your hotel/hostel and they will guide you in the right direction.

Hezekiah’s Tunnels in the City of David

The City of David is an ancient city that’s right outside Jerusalem. You can explore some of the archaeological sites of the Old City, one of the best parts being Hezekiah’s Tunnels. The tunnels used to be an ancient water source.

Now you can walk through the tunnels and see the amazing engineering done thousands of years ago. Be warned, though. The tunnels are filled knee deep with water.

In order to see the actual size, you have to take a tour underground. To give you a perspective of how impressive the underground tunnels are, just one of the structural rocks is over 40-feet long and weighs over 500 tons.

One of the best panoramic views of the Old City is seen from the top of Mount Olives. A big portion of the mount is used as a cemetery; other significant sites on the mount include the Church of the Ascension and the Garden of Gethsemane, which is the place where Jesus prayed before being crucified. Here you’ll also find olives trees dating back a thousand years.

West Bank is a region in Israel surrounded by concrete walls that keep the Palestinian residents inside. Portions of the walls are covered with stunning must-see graffiti drawn by the famous British graffiti artist Banksy. The Church of the Nativity in Bethlehem is also a very popular attraction for Christians, since that’s believed to be where Jesus was born.

Swim at the Beach in Tel Aviv

Tel Aviv has some of the nicest beaches I’ve been to. It’s the perfect spot if you want to relax on a hot day or surf. There are a few instructors at the beach who provide lessons and from where you can also rent your surfboard.

Masada is an isolated fortress that was sustainable at the time of King Herod, who built the fortress. Standing at the top of the fortress, you get a nice view of the Dead Sea. The Romans conquered the fortress in a unique way, and close to 1,000 Jews committed suicide because they didn’t want to surrender to them.

If you feel really adventurous and energetic, you could hike up the fortress. Alternatively, you could take a cable car. A popular activity is hiking up the fortress early in the morning at 4 am to catch a nice sunrise.

I know what you must be thinking, “Not a museum.” I’m not a big fan of them, either. But Yad Vashem is a little different. It is Israel’s memorial museum to the over 6 million Jews killed in the Holocaust.

You’ll find a lot of information, rich resources, exhibition halls, videos, and much more inside the museum that provides details of the World War II Holocaust.

Visit the Sea of Galilee

Aside from visiting some of the significant Christian sites, like the church of Tabgha, where Jesus did a lot of preaching including the Sermon on the Mount, you could also cycle around the 33-mile (53 km) Sea of Galilee.

Our favorite activity was standing knee deep in the sea and letting small fish bite off the dead skin on our feet. I know this might sound weird, but this is offered in spas around the world and people pay a lot of money for it. Here, you could do it for free.

This region of Israel is also one of the best places for a long hike. You’ll catch some nice hillside views along the way.

Israel is a very cultural, religious, and historic country to visit, and that’s what makes it so unique. Even if your interests are not culture or history, there are plenty of activities for you to do, some of which I mentioned here.

There are a lot of other activities that I did not mention in this article but are definitely worth doing. This list is the top 10 things that I loved the most, but I must admit it was hard excluding some of the other activities we did.

Tom Brown loves traveling and spending time outdoors in our beautiful nature. When not traveling or outdoors, he shares his experiences on his blog Thrifty Outdoors Man. 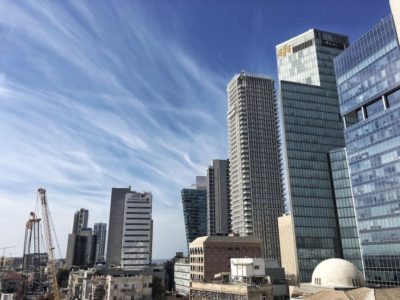 Home » Guest Posts » Top 10 Things to Do in Israel