One of the top things that I just had to see when traveling to Laos, was the Pak Ou Caves.

I had seen an episode on Don’t Forget Your Passport years earlier and I had wanted to go their ever since. The image of thousands of Buddha Statues hidden in a cave on the Mekong River was etched in my brain.

So when we arrived in Luang Prabang, it was the first

The Pak Ou Caves are a sacred Buddhist site located on the Mekong River. the Name Pak Ou means Mouth of the Ou. Since the caves are located where the Mekong and Nam Ou Rivers meet.

Located just 25 km outside of Luang Prabang they have become a popular day tour.

You can hire a boat to take you along the Mekong River, or you can hire a Songthaew which is what Dave and I did.

Or you can book a guided tour in advance. Guided tours are a great way to get insider information and to have a more intimate experience.

There are some great tours from Luang Prabang that include village visits and waterfall tours. If you want to combine a trip here are a couple of suggestions.

The Pak Ou Caves are a site worth seeing!

The Pak Ou Caves are loaded with thousands of Buddha statues and they are still used as a place of worship today.

For hundreds of years, local people have been making a pilgrimage to the caves at New Year and the tradition continues today.

There are thousands of different Buddhas statues in the Pak Ou Caves. From what we gather, there are 4000 – 6000 thousand Buddha statues ranging in size and in various forms.

We saw large statues, small statues, standing statues, sitting statues, and reclining buddhas. Some are bronze or copper, some are wooden and each is in a different state of disrepair.

The majority are the “Standing Tall Luang Prabang Buddha Statues.” At least that is what we were told.

Approaching the Caves by River

Approaching the caves from the opposite side of the Mekong River is a beautiful view.

Located in a high limestone cliff where the Mekong joins the Nam Ou River it is the perfect location for a spiritual journey.

The white stairs can be seen leading into the dark hole cut into the side of the limestone cliff. And you know you are about to enter something special.

There are two levels to the Pak Ou Caves.

Tham Ting is the lower cave and Tham  Theung (Tam Pum) is the higher cave.

Tham  Theung the upper cave is quite dark but it is filled with more statues and is the far more impressive as it feels as if you have stepped back in time. Make sure you bring a flashlight to really explore the statues.

We were lucky when we visited, it wasn’t very busy and we could take our time examining all of the thousands of statues.

About the Pak Ou Caves

There are many different stories as to why Buddhas are in the Pak Ou Caves.

Whatever the reason, the collection of Buddhas in the Pak Ou Caves have helped support the local economy and attract tourists from around the world.

After the Caves Visit

After our tour of the Pak Ou Caves, we had our driver take us back to Luang Prabang to explore the temples of the UNESCO World Heritage Site.

It makes for the perfect complement to the caves as you immerse in Buddhism.

We rented bicycles and they are the perfect way to explore Luang Prabang offering freedom to ride along the Mekong River and to ride quickly from one temple the other.

Being a world heritage sight, Luang Prabang is littered with temples. Most Notably Haw Kham, the former Royal Palace.

Each temple is beautiful and contains ornate tapestries, carvings and Buddha images.

We thoroughly enjoyed looking at each temple at our own pace riding our bikes from place to place.

There are coffee and pastry shops to stop for lunch, and we felt very civilized as we sipped our café latté while enjoying a croissant.

Laos used to be a French colony and it has a large French influence. You’ll be able to eat a baguette while sipping a cappuccino while watching monks in red robes walk the streets.

We were lucky to stumble into a temple at a time when Monks were playing their drums with great vigour and we sat, listened and watched for several minutes.

While in Luang Prabang, you must walk the steep hill to Phou Si.

It has a spectacular panoramic view of the area and the sunset is certainly one of the most beautiful I had ever seen.

We weren’t overly impressed with the night market it was overpriced and very busy, but we bought something just the same and have enjoyed keeping it on our mantel.

How to Get to the Pak Our Caves

You can hire a tuk tuk or songtheaw from Luang Prabang which is what we did. It takes you to the town across the river and then you can hire a boat to take you to the caves.

You can also catch a boat from Luang Prabang to take a journey along the Mekong River directly to the caves. 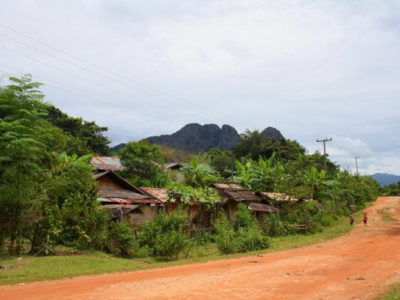