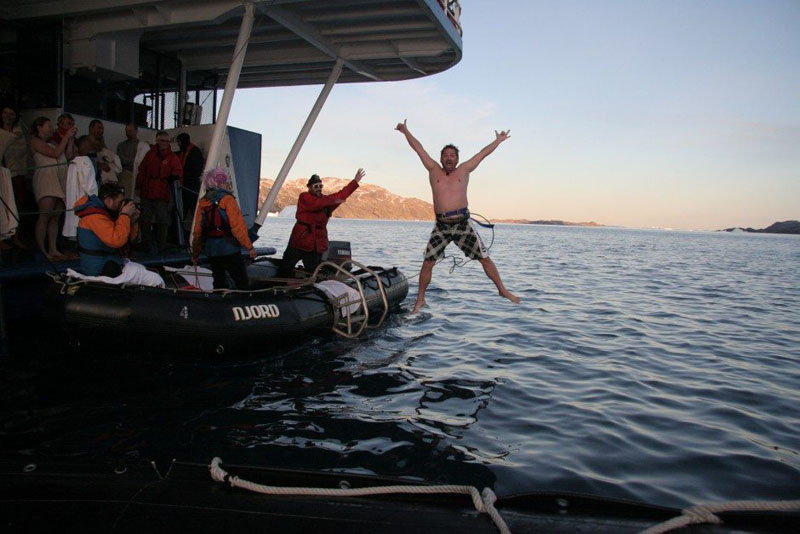 When Quark Expeditions invited us to join them on their Arctic voyage to Greenland, our reaction was instant excitement. But within a few minutes, it turned to complete fear. “I won't have to do the Polar Plunge again will I?”

Let me tell you a little story from 2012. Dave and I were in Antarctica with Quark Expeditions on the Sea Spirit, and one of the “must do things” on the continent is to jump into the frigid waters of the Antarctic Peninsula from the back deck of the ship.

I think about a third of the passengers were nutty enough to try the plunge while the rest sat on the deck relaxing in their parkas while drinking hot chocolate and Baileys Irish Cream. They were the smart ones.

Dave loved this idea, he's a water baby and will dive headfirst into anything. I, on the other hand, hate cold water.

I'm talking, despise it. My parents used to always try to get me to jump into Lake Huron in the early summer season, and there was no way I was getting in until it warmed up to a respectable temperature sometime in August. Give me bath water any day. Cold, no way! 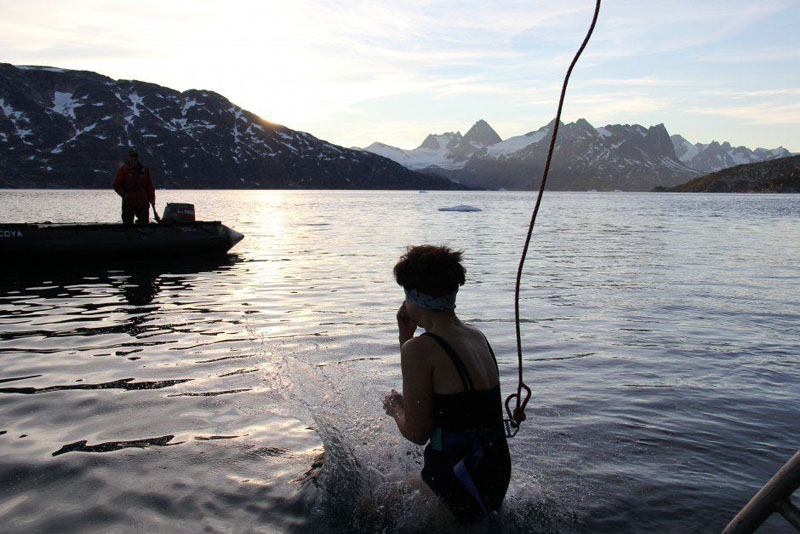 I may hate cold water, but being the “Adventure Couple” that we are, there is no way I am allowed to back out of anything.

Not because anyone makes me feel that way or pressures me, no I do that just fine on my own. When we have a challenge that must be done, I can't let myself say no.

Dave is the most supportive guy on earth and he always gives me a way out. “You don't have to do anything you don't want to honey” he says while I sit on the bed in the privacy of our stateroom agonizing over having to jump into the water.

What drives me crazy is that Dave is never afraid of anything. Just once I'd like to be the one comforting him and telling him he doesn't have to do it.

Cut to Greenland a year and a half later. 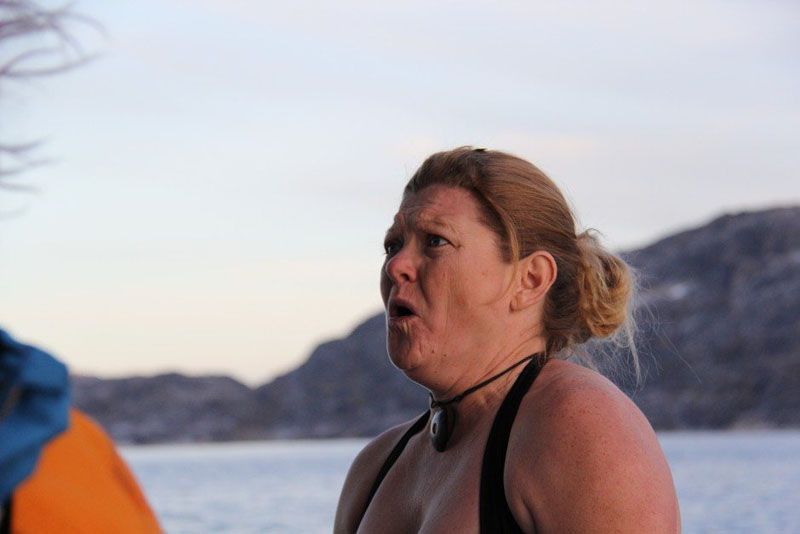 When the day finally came to jump in the icy waters of Greenland, I did the exact same ritual that I did in Antarctica.

I told Dave I can't do it. He lovingly supported me and said, “You don't have to honey.”

So I took the easy way out and walked down to the Lido Deck fully clothed. I told everyone that I was backing out.

Everyone was standing in their robes excited and fearless and they all told me that I had to do it, I'd regret it and it's going to be fun. 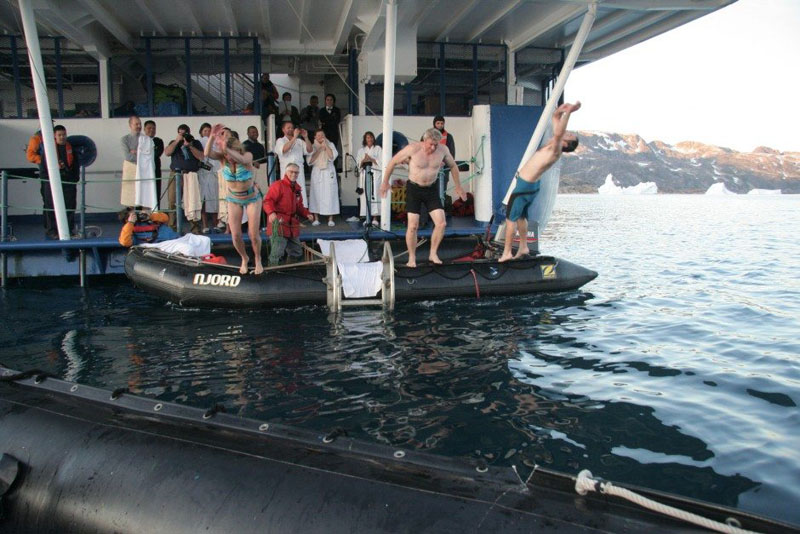 Deep down I knew I'd regret it and deep down I think I knew that walking out to tell everyone I wasn't going, was my way of gathering the courage to go for it.

After agonizing for a couple of minutes, I  changed my mind and ran back to my room to put on my swimsuit.

People had already started taking the plunge by the time Dave and I arrived. It was tough to see people jump in while I waited on deck for my turn. I didn't want to do it, but I also wanted it over with.

I think I was more nervous the second time around. After taking the plunge in Antarctica, I knew what to expect, I knew I didn't like it and I knew I was a wimp.

When I  hit the water in Antarctica, I truly felt that I was having a heart attack. I couldn't catch my breath, I couldn't swim and I lunged back for the ladder as quickly as I could to get myself out of there.

Even when I got back on deck, I was sure something was wrong as my ears were plugged and my heart was racing.

But, that was just my anxiety and fear taking hold, and all was well. I was happy that I did it, but never wanted to do it again. I never thought I'd have to do it again either. As fate would have it, I did it again. 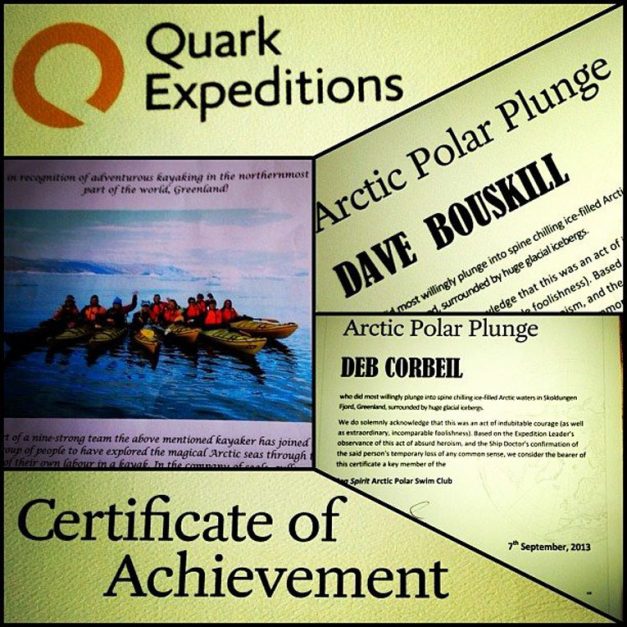 Like Antarctica, I am glad that I did the polar plunge. I would have regretted not jumping in and I would have berated myself for the rest of my life. Did I enjoy it? No. Would I do it again? No. Will I have to do it again? Probably, but I'll tell you now, I am still not going to like it.

For more on Greenland visit