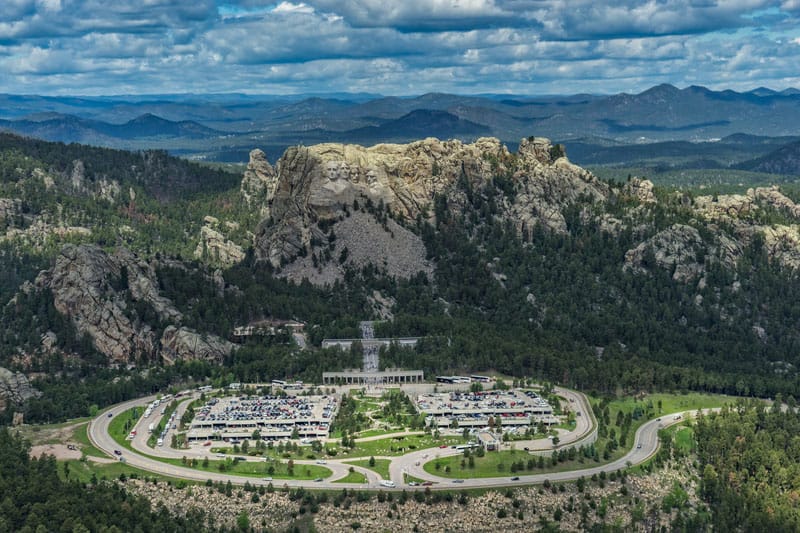 The Black Hills of South Dakota are a sculptor’s dream. Jagged granite rock faces have been waiting for centuries to be molded and manipulated to works of art.

It’s no wonder they attracted artisans in the early 1900s to create masterpieces on the side of these South Dakota hills.

Two of the most iconic monuments of the United States are located in the Black Hills, Mount Rushmore and the Crazy Horse Memorial.

This article is split into two sections. We start with Mount Rushmore and then talk about our experience at Crazy Horse.

If you want to skip directly to Crazy Horse information and the History of Crazy Horse and the Lakota Sioux People of South Dakota you can click here.

Our trip started off about 30min outside of Rapid City, SD with an evening tour of Mount Rushmore.

Arriving a couple of hours before sunset, we had the chance to explore the grounds and the museum and learn about the monument before watching the lighting ceremony.

Mount Rushmore opened in 1941 after 14 years of construction! It was sculpted by Danish-American sculptor Gutzon Borglum and his son Lincoln Borglum.

The idea was to create a sculpture that would lure tourists to the Black Hills of South Dakota. Four pivotal American presidents would do the trick.

Originally they considered sculpting western American heroes such as Lewis & Clark, Sacagawea, and Buffalo Bill Cody to be the faces of Mount Rushmore, but after careful consideration, they decided that great presidents would attract a broader spectrum of tourists.

So they settled on the faces presidents George Washington, Thomas Jefferson, Theodore Roosevelt, and Abraham Lincoln.

Construction began in 1927 at the height of the Great Depression with George Washington being the first president.

The lighting ceremony was interesting to watch if not a little bit Kitschy. It tells the story of the making of the monument and some American history skirting over the dark Native American past.

I would have loved to remember my visit when I was a baby and my parents took a cross country road trip through America.

Back then they tell me that you simply drove up beside it to have a look.

I found the bandstand and bleachers a little too touristy and I think it would have been far more beautiful to have left it in a more natural state.

It was interesting watching the video to see the history of Mount Rushmore, but I found it to be a bit dated and I think they should replace it with something that has a little more production value.

After the video, the faces are lit up and a touching ceremony occurs where the national park ranger invites all active and retired military onto the stage to commemorate their sacrifice for their country.

It’s a fitting venue since the Mount Rushmore National Memorial is probably one of the most patriotic monuments in the entire country.

Mount Rushmore is definitely a monumental site to see. If you want a more in-depth experience, you can grab the audio tour for $6 at the information center that tells you the whole history.

The high season is in July to mid-August and it gets really crowded. Our recommendation is to visit on the shoulder season when the crowds are thinner.

If you plan on visiting during the day and you have a couple of hours, check out the Presidential Trail, that gets you right up to the faces themselves.

To think that these four 60 foot tall faces were sculpted and carved using dynamite and sandblasting more than a century ago is amazing.

I cannot imagine someone taking on a feat like that today.

The cost for entry to Mount Rushmore is free, but there is a parking fee for cars (no matter how many people) $11.00 per vehicle.

But wait, someone has…..

Crazy Horse is just 16 miles down the road from Mount Rushmore and is another magnificent monument that is still in the process of being created.

The Crazy Horse monument is 73 years in the making dedicated to the Lakota People.

Construction began in 1947 by sculptor Korczak Ziolkowski and is still a work in progress to this day.

Ziolkowski promised the Lakota People that no federal funding would be involved and the project has relied on public funding for more than half a century.

His children and grandchildren have now taken over the project, and you can visit the museum and monument on a tour.

The Story of Crazy Horse

The Lakota People of South Dakota wanted a monument to show that they too had heroes.

Mount Rushmore was built on sacred Lakota Land and the Lakota Sioux People searched for a way to counter the insult of white faces on their native land.

Crazy Horse led rebellions against the US army and was their hero of choice.

About Crazy Horse – The Man

Crazy Horse was one of the last hold outs of the Native Americans to surrender to troops. He had no intention of living on a reserve but negotiated a surrender to bring his ailing people in.

He was then going to leave them in peace and live out his days on his own.

Instead of sticking to their word, the United States military double-crossed him and stabbed him in the back murdering him.

This monument is dedicated to his strength and heroism.

You can tour the museum at the base of the monument that tells the history of the Native American culture.

In the gift shop, you can buy local art and souvenirs to support the economy. There is also a craft to display of all the instruments used to blast the rock over the years.

Visit the Face of Crazy Horse

A bus will take you out to the site for a closer view, but if you want something more, you can book a tour to walk up to the face.

A van will take you most of the way up so don’t worry, it’s not a grueling walk.

When you stand beside the face of Crazy Horse, you feel the enormity of the task. This will be the largest sculpture on earth when it is complete.

The arm and horse head are expected to be finished sometime in the next dozen or so years.

For more information on visiting, go to the Crazy Horse Memorial website for details.

The monuments of South Dakota are truly spectacular. I do not think that anyone would be crazy enough to take on this feat today, but to see them with your own two eyes is truly a wonder.

I have seen Mount Rushmore in so many photographs and films during my childhood it was almost surreal to see it in person.

To learn more about the Crazy Horse memorial and the important tribute to the Lakota People was something we are truly grateful for.

Both monuments are true works of art and worth the trip to South Dakota.

There is a lot of controversy surrounding both monuments and the Lakota People are calling for the removal of Mount Rushmore.

If you would like to get even yet another view of these two national treasures, take a helicopter flight to view them from above.

Black Hills Aerial Adventures offers one of the most reasonable helicopter tours we’ve ever seen and it gives you a birds-eye view of both Mount Rushmore and Crazy Horse.

It also offers a lovely view of the Black Hills of South Dakota.

The helicopter doesn’t get as close to the monuments as we would have hoped and it doesn’t do an even split for views. (Meaning one side gets more view time than the other)

We sat on the wrong side and never did get a good view of Mount Rushmore.

If you do book a helicopter tour, make sure to sit behind the pilot on the right-hand side. That’s where you’ll get the best views of Mount Rushmore.

However, you see more of Crazy Horse on the left.

Neither one takes you very close though, we assume it has something to do with airspace security. But for the price, it’s a good tour.

The Mount Rushmore Crazy Horse tour is $205 per person, but there are cheaper tours to see just one of the monuments for $110.

If you have never been on a helicopter, they offer discovery tours starting at $49.

And there you have it! I think we did everything you can do to see Mount Rushmore and Crazy Horse thoroughly.

They are America’s treasure and we highly recommend checking them out. What’s your favorite National Monument?

7 Adventurous Things to do in Salt Lake City

A Historical Look at Virginia Beach