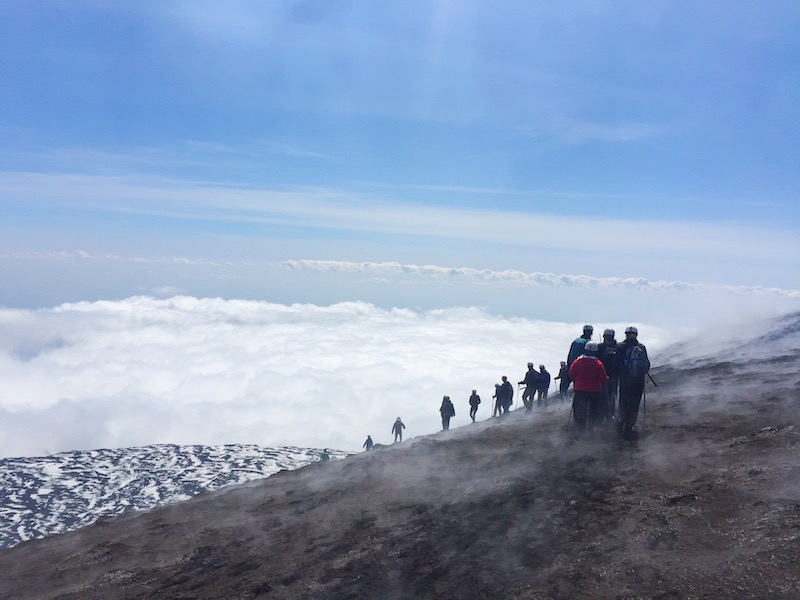 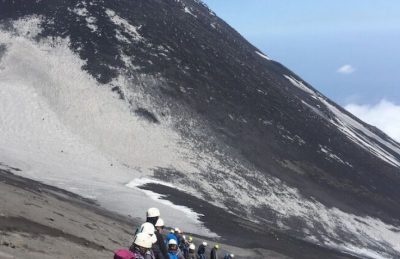 Mount Etna in Sicily is many things, amongst them one of the most active volcanoes in the world.

We will share with you the best way to hike Italy’s Mount Etna, and all the advice and tips you need to get to the top of this mighty and beautiful volcano.

Mount Etna is not to be conquered as she is the conqueror, but you can hike to the summit, currently at 3,326 meters above sea level.  (10,912 feet)

A Guide to Hiking Mount Etna

When is the Best time to Climb Mount Etna?

You can visit Mount Etna and hike year-round.

Mount Etna is located outside the city of Catania on the island of Sicily in Italy.

Between October and April, you are likely to be hiking in low cloud with extensive snow on the ground.

April to September is the best time for hiking Mount Etna; if you have the flexibility, visit on a clear day.

The best months to visit Mount Etna with pleasant temperatures and without the extreme July and August tourist crowds, are May and late September to October.

How to Get To Mount Etna

The main hub of Mount Etna is on the south side of the crater, Sapienza Refuge ( Rifugio Sapienza ).

Here you will find parking and a variety of shops, restaurants and ticket offices for the various services on offer.

You need to pay for your days parking the following morning at the parking ticket office over the road.

What Equipment & Clothing Do You Need to Climb Mount Etna?

You do not have to be super-fit to summit Mount Etna but you do need to be determined.  The ascent is steep and challenging underfoot.

We encountered icy flows down the lava and steep, sometimes sheer drops, so confidence in your abilities is important.

Do not attempt this hike if you have respiratory problems or suffer from vertigo.

It is possible to hike to the summit without assistance from Sapienza Refuge.

This is a punishing full day hike, gaining 1,416m across some very challenging terrain and steep inclines.

The only marked path is that which follows the cable car to 2,500m. From this point, there are no marked or even defined paths.

A Spanish tourist died falling into one of the larger craters in 2001, after being overcome by sulphur fumes.

You must be an experienced hiker to attempt Mount Etna without a guide. You must also have knowledge of volcanoes, a high level of fitness and a pre-planned GPS route.

It would be very easy to become disorientated, particularly if the weather closes in.

This option involves taking the cable car (€33 per person return) from Sapienza Refuge to 2,500m.

Indeed, one of them is right next to the bus stop (for real!). Each element is paid separately at the cable car station. It is possible to rent jackets, poles, and helmets there also.

Mid-April is the perfect time to hike Mount Etna, it is shoulder season and so not too busy and the weather is more likely to be kind.

We did not book in advance.

Hiring a Guide for Mount Etna

A quick Google search will find you any number of Mount Etna guided tours with varying itineraries and costs which can be booked online.

Trip Advisor had reliably informed us that is was possible to book a guide on the morning you wished to hike.

Opposite the car park is a semi-permanent trailer called ‘Trekking Excursions on Etna‘, we were able to book a guided hike at 9 am that morning for €85 each.

This covers the costs of the guide, cable car, and 4×4 transport.

You will also be provided with a helmet and poles if you don’t have your own.

We paid by credit card but it was a disorganized and lengthy process. It is far easier if you give in to the Sicilian way of things and pay by cash!

Groups were around 20 persons in size and on the day we hiked, they sent up three groups.

In terms of the organization before setting off, expect it to be chaotic and not to start at 9.30am as stated.

We didn’t actually leave for the cable car until well after 10 am!

If you want to book before you go make sure to check out this Mount Etna Summit Tour for only 45 Euro per person.

Distance 8.9km on a circular route

All About Trekking Mount Etna

From Rifugio Sapienza we stop at the meeting point to split off into separate groups for a scenic ride up to 2500 metres.

Further chaos here, in a building well past its’ “sell-by” date and just not designed for the number of visitors it has to manage on a daily basis.

There have been two attempts to build new cable cars but both have been destroyed by recent eruptions.

You will be asked to wear your helmet so you can join the ‘special line’ for tours, which will really hack off all the people not wearing helmets because your line will move quicker than theirs.

Eventually, you will filter through a small gap and get onto the cable car.

The views are marred a bit by the scratched perspex of the cable car windows. However, you get your first real sense of just how vast and dramatic Mount Etna is as you head upwards into the clouds, over the black lava fields and the tiny people walking the path.

On arrival, you will be filtered through to wait for the 4×4 bus, again getting special treatment because you are wearing a helmet!

Once we disembark the cable car, we catch a 4X4 bus to drive along the slopes and solidified lava flows to 2,920 meters

These are amazing. They are like buses on steroids with huge tires and visible shock absorbers.

It was a bumpy ride up to 2,920m where the ‘new’ cable car station got melted by a recent eruption!

There are no facilities here (‘cos they all got melted by the eruption!) so make sure you use the loo at the cable car station before getting on the bus.

3. What to Expect When you Start the Hike

Your guide will introduce him/herself and you will set off over a lava plain; the path here is pretty flat and easy going with lots of volcanic sand and grit.

At some point, the guide will stop and give you an overview of your surroundings, each visible crater, and the dates of the last Mount Etna eruptions.

As you stand and listen, feeling like you are on the moon, steam will wrap around your feet and legs and you will realize you are standing on Mother Nature’s own underfloor heating!

The route to the Mount Etna summit changes regularly but you can expect some snow, ice and a fairly steep ascent of the last 421 meters (1280 feet).

At one stage we traversed a steep slope with ice fields across it which I found really challenging; you will absolutely need your poles here, I had only taken one pole and wished I had two.

It will take around 1 hour 30 minutes to get to the first main crater and your guide will stop regularly on the way up, to provide information and make sure stragglers can keep up.

As you come over the last lip of the ascent and see the crater in front of you, prepare to be awe-struck.  The rumbling of the deep magma as it erupts underground is inescapable.

Smell the tangy sulfur in the air. Breathe too deeply and you will be coughing with it!

The summit is a monochrome moonscape. But the occasional ochre and green of the rock and sulfur deposits are beautiful.

There is a strong sense of the power of Mount Etna as you stand on the edge of the abyss looking in at the curling smoke and sulfur coming up from the depths.

It’s unsettling to know the depths but not quite being able to see the bottom.

Standing on the rim, you can feel the heat warming your face.

It’s a shock to turn away into the biting wind that whistles across the summit.

You will traverse around the crater and along the lip, in a strict single file.

We stopped at various points for information sharing and to wait for clouds of sulfur to blow over.

There are fascinating holes which billow steam as you pass, you can reach in and feel the heat but be careful not to topple over.

You are now above the clouds and the view is incredible in every direction. Craters, steam and sulfur one way, piercing blue sky above puffy white clouds the other way.

This will be the best lunch view you’ve ever had!

The lunch stop on Mount Etna is about 20 minutes long, any longer and you will start to get really cold.

Be prepared that there is no-where really private if you need to pee, but everyone is in the same boat and people just look the other way.

The guide will give you a lot of red wine and offer coffee; we took a flask of tea and it was truly amazing!

You will spend around an hour, plus lunch, at the summit with lots of opportunities for photographs and questions before beginning the descent.

The descent was almost as challenging as going up!  We spent a lot of time sliding through soft volcanic sand and ash.

Going down was a bit like running down a steep sand dune towards the sea, except there was no sea. Only lava fields stretching out in front of you.

As you come down you realize how vast these are and how truly terrifying it must be when an eruption occurs and the lava flows start.

There were areas of ice and snow to cross but these were easily manageable. We were down to the lower craters pretty quickly.

7. The Lower Craters of Mount Etna

Equally as fascinating and easier to traverse around, the lower craters are from recent eruptions.  The path is much thinner here as you follow the rim, with steep drops on either side.

From here you will continue the hike all the way down to the cable car station before boarding to go back to Sapienza Refuge.

The Experience of Climbing Mount Etna

If you are visiting Italy and have Sicily on your itinerary, you must go to Mount Etna.  Even if you only go to Sapienza Refuge for a day tour and take a mini-hike up the crater that is literally next to the car park, do it.

This is a once in a lifetime, not to be missed, opportunity.

If you can afford it and are fit enough to hike to the summit, then we would highly recommend the guided hike.

Not only will you be safe in the hands of an experienced mountain guide, but they will also share insights and information that will give you a whole new appreciation for the immense power and unpredictability of Mount Etna.

I promise you will be left in awe and wonder at Mother Nature’s ability to create beauty and terror all in the same place.

Everything You Need to Know to Climb to Everest Base Camp

About Phil and Izzy

We are Phil and Izzy. In early 2018, we sold our home that we had spent six years renovating, bought a motorhome and gave up work. We are travel bloggers and photographers with a passion for sharing our stories and adventures at The Gap Decaders