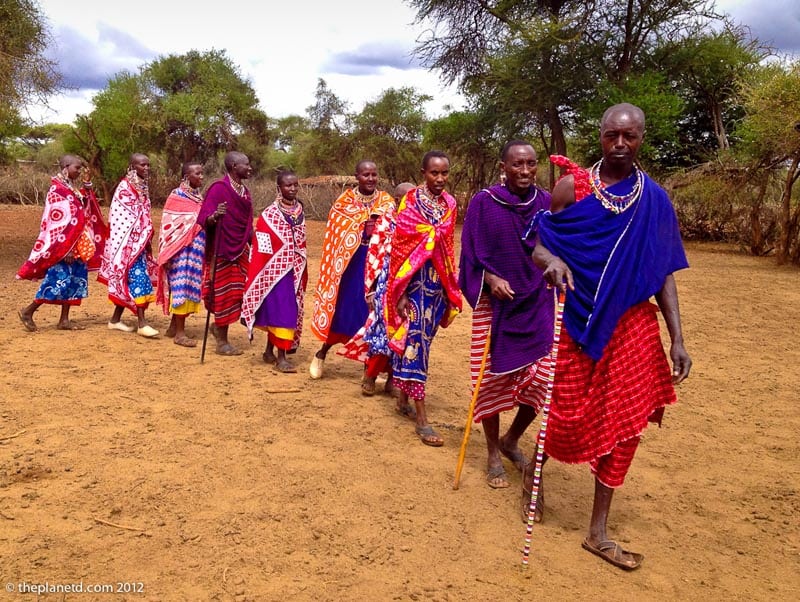 After a bumpy ride on the back roads of Kenya, we ended up at a quiet camp in the middle of Maasai country near Amboseli National Park.

Before we started the wildlife portion of our Kenya experience, we were going to get to know the Maasai people of the Masai Mara little better.

And there was no better place to do so than the Selenkay Maasai camp.

As we enjoyed some fresh pineapple juice, the owner Leonard, told us why he decided to open the Masai Camp.

He explained that he wanted to create legitimate employment for the people of the surrounding villages.

The Maasai People have been losing their way of life and this allows them to earn a living while keeping their culture alive.

For the Maasai who aren’t part of the tourism industry, it’s a difficult life.

They have lost much of their grazing land for livestock and water is a long distance – up to 5 km – away from the village.

People spend much of their day hard at work making very little money.

For those who are in the tourism industry, it is a different desperation where they work hard for every tourist buck.

Tourists will be asked for money when taking photographs and will be pestered to buy jewelry and souvenirs.

It makes it difficult to gain an understanding of their way of life.

It is a refreshing change to visit an actual village rather than a staged community set up for tourists.

Our Guide Makau, booked this Masai Camp because when you book a night here, a portion of money goes directly to the Maasai people.

The people from the surrounding villages earn a living while you are given a glimpse into the traditional way of life.

Because they are a part of the camp and work at the camp, they welcome you into their homes and allow you to take photographs without demanding money.

Many of Masai people of the surrounding villages work at the camp .

Many of them joined us in an evening of conversation so that we could ask them (via a translator) about their lives and they can ask us about ours.

Our time at Selenkay Masai Camp.

We checked into our luxury tent and had the afternoon to relax and take a nap before going over to the next village for a visit.

It was so quiet and relaxing, we were sound asleep within minutes.

We could have spent several days at the Selenkay Maasai Camp doing nothing but relaxing.

But we were here for a safari, so it was soon time to see what was happening.

Our Masai guide, Joseph, met us at the dining table to escort us through the conservancy towards the camp.

I couldn’t believe we were actually walking in the African Savanna.

As we approached the village, we heard singing in the distance. The entire camp had come out to greet us.

Dressed in colourful clothing and adorned with head dresses and handmade jewelry, they danced and sang songs welcoming us to their lives.

The women had beautiful piercings and the men carried ceremonial staffs. They sang as we watched and then welcomed us to join them.

It was the most exhilarating experience to sing and dance with the Masai. Once the welcoming dance was over, we took a walk through the village.

Leonard was the leader of the group and he has that rare blend of being a part of both the Masai people and the modern world.

He was our guide and our translator during our time in the village.

The Maasai people were proud to have us there and proud to show us their way of life.

And Leonard, was right there to translate, inform and take photos of the event himself!

Some of my favourite moments was when I watched Dave take photographs and as he was doing that, Leonard took photographs of Dave.

He grabbed Dave’s long lens and snapped away taking some beautiful shots.

It is men like Leonard who will take the Maasai people into the 21st century while keeping their traditions alive.

We took a look inside one of their mud houses.

The Masai live around their livestock. Their livestock is their life-blood and the most important thing in the village.

All of the animals sleep inside a corral made of thorn trees with the houses surrounding the outside.

Up to 10 people can live in two-room dwellings that are on the perimeter of the corrals.

In between is a kitchen with a fire pit for cooking.

After a tour of the houses, it was time for the men to show off their lives.

They made fire for us out of sticks, showed us how to play a game of stones, which I am still confused about the rules.

Once the skies cleared we went for a walk to visit the women looking after the livestock.

The women in Africa work the hardest and it is something that needs to be changed.

Now that the men no longer have to hunt, they live a life of leisure while the women fetch water miles away, feed the livestock, milk the cows and goats, look after the children and prepare all the meals.

The men really need to pick up the slack.

To me, it is clearly the women that acquire all the wealth by making the jewelry, tending the fields and raising the livestock.

Hmm, come on guys, get to work and earn your keep.

It is a very real problem in Africa, but with more places like Selenkay opening up, things are changing.

The men actually cooked us breakfast and carried our bags.

They looked after the daily running of the place and by following the lead of men like Leonard, the future is looking bright for the Masai People of the Selenkay Conservancy.

Our day ended with a warm shower at our tent brought to us by hand (carried by the men I might add) and poured into the water reserve.

We then met at the campfire after dinner to chat with the villagers and exchange information on our ways of life.

The men of the Selenkay Maasai Camp seem to be changing with the times and working in the camp.

It seems like Leonard has found the balance that the Maasai people have been searching for all these years and hopefully other camps are following suit.

Empowering the People one Brick at a Time – Kenya

Born Free Lives on in Kenya