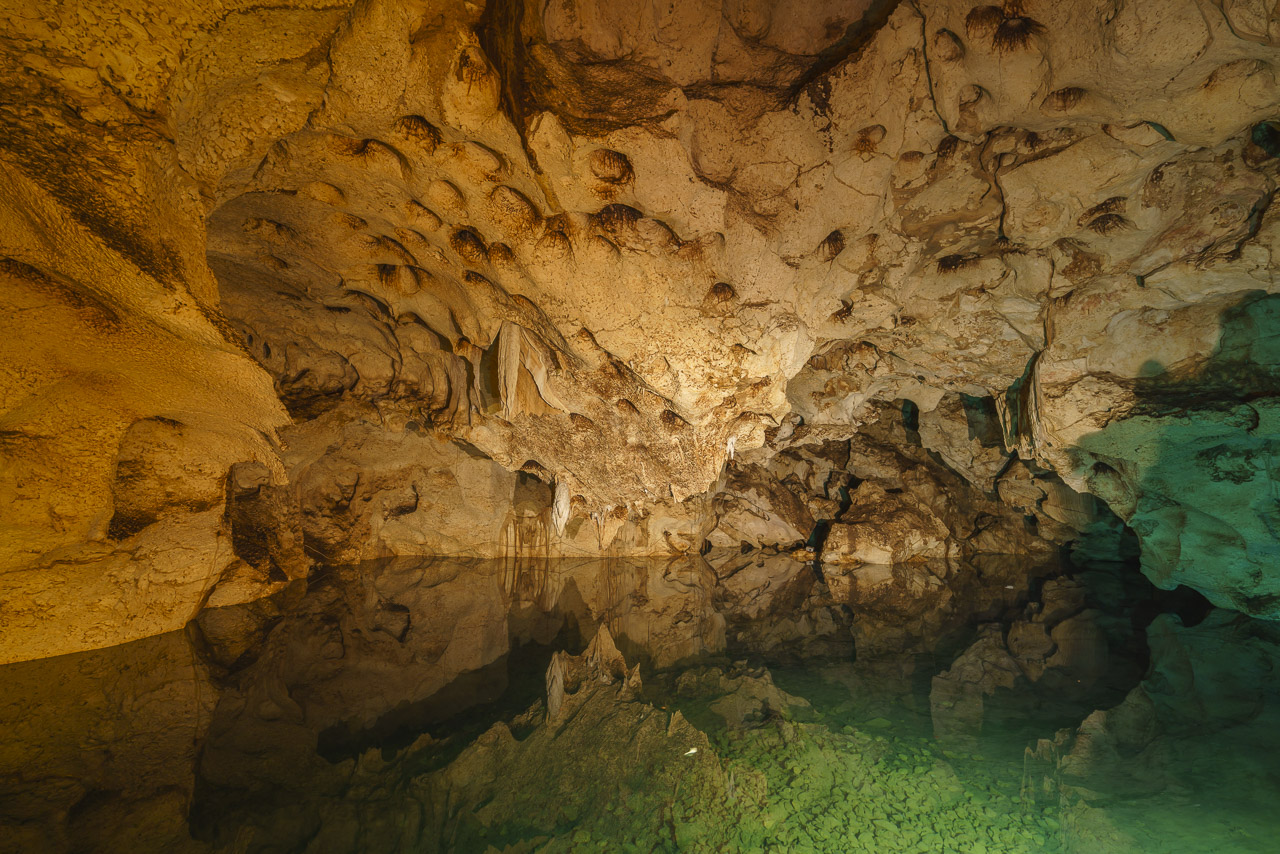 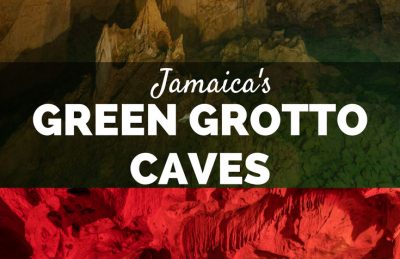 Dave and I love movies almost as much as we love to travel. We especially love combining our two passions together. So when we learned that Jamaica’s Green Grotto Caves were the location for James Bond’s Live and Let Die, we had to go!

About the Green Grotto Caves

The Green Grotto Caves are easily accessible from Montego Bay or Ocho Rios.

Many people see it on a tour, but if you can hire your own driver or taxi to take you, it’s only $20 per person and you can end up on a private tour as opposed to joining the huge cruise group.

The tour is a fascinating walk through geology and history and it lasts about an hour. 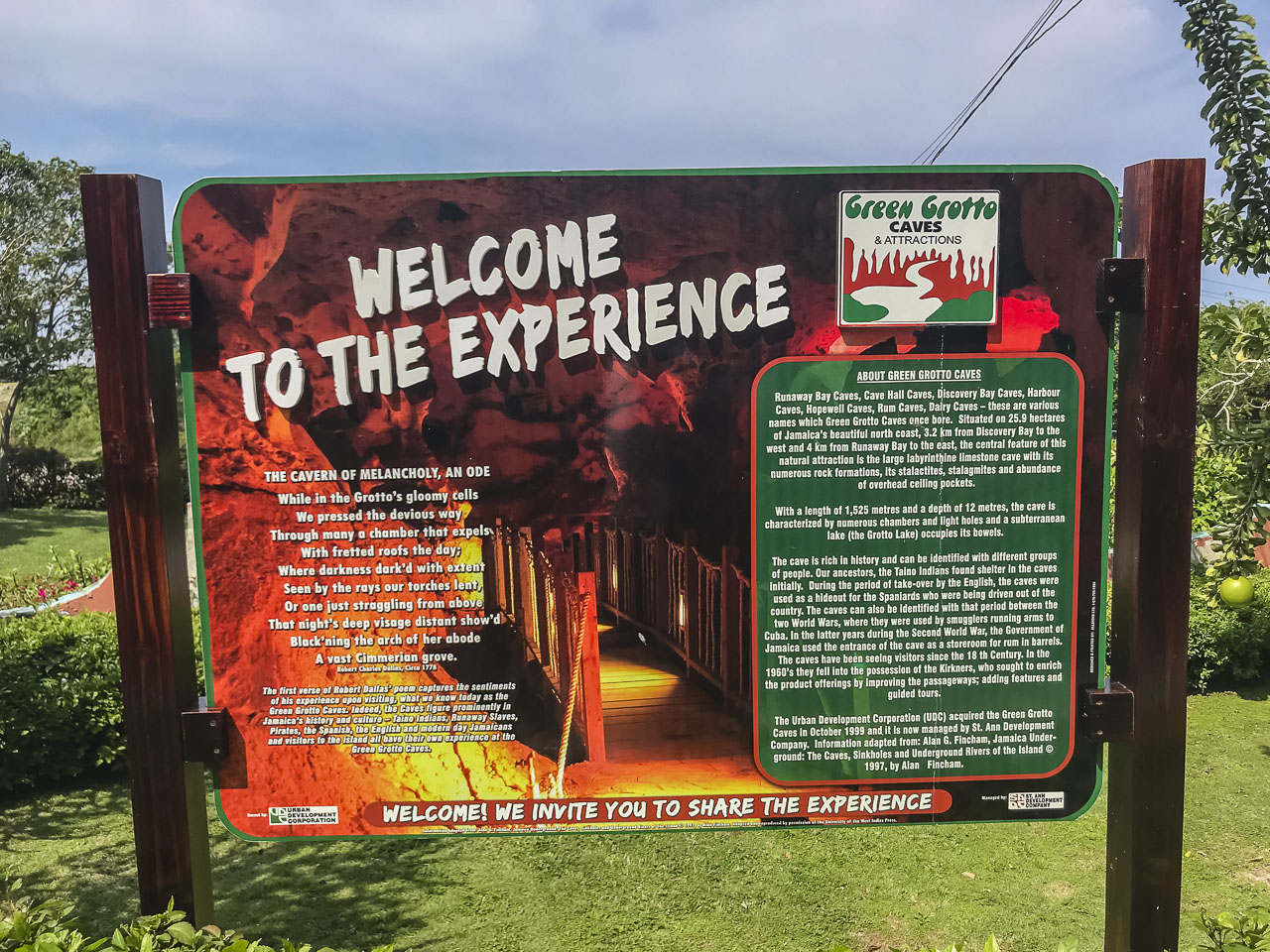 We met our guide at the entrance, put on our helmets (complete with hairnets) and journeyed into the centre of the earth. (okay we didn’t go that far but we did go a fair distance underground)

There are two caves to tour, the Runaway Cave and Green Grotto Cave. 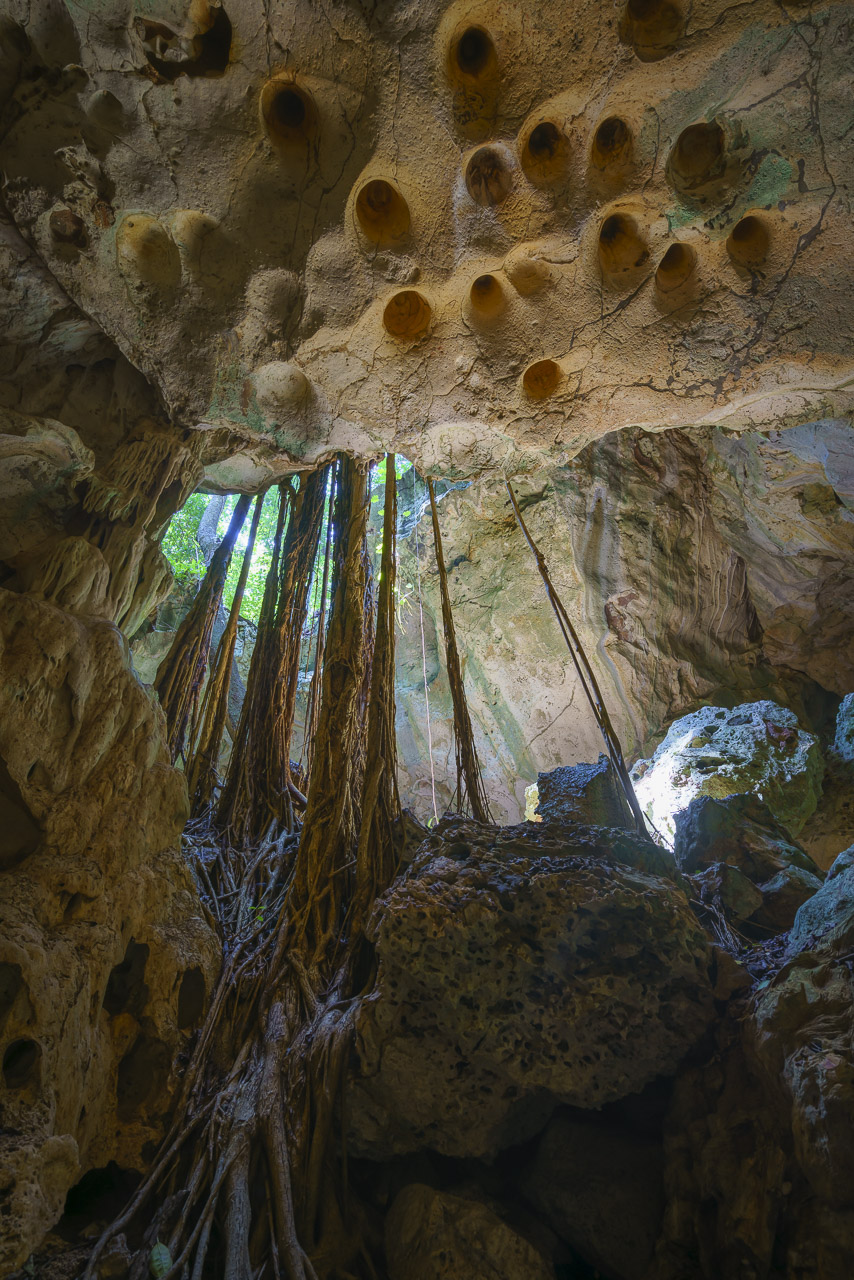 The History of the Green Grotto Caves

They are believed to have been used as dwellings for the first inhabitants of the island, Arawak Indians known as the Tainos.

They were used by the Spaniards to hide from the English when they invaded the island in 1655. 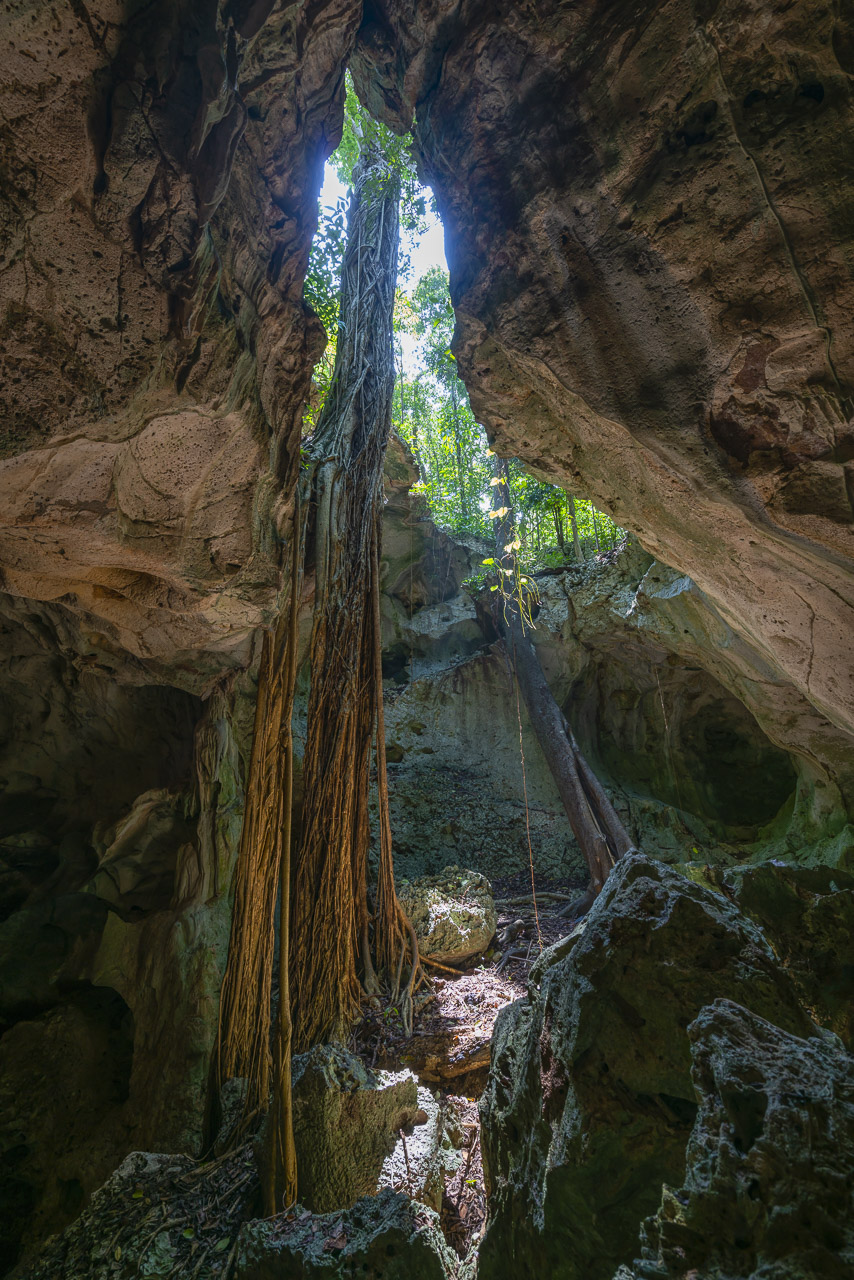 Inside the Green Grotto Caves

Runaway slaves also used these chambers to hide from the English in the 18th century.

Pirates used these caves to hide their treasures and during the World War eras, arms dealers smuggled guns from here to Cuba.

It has even been used by the government to store rum. 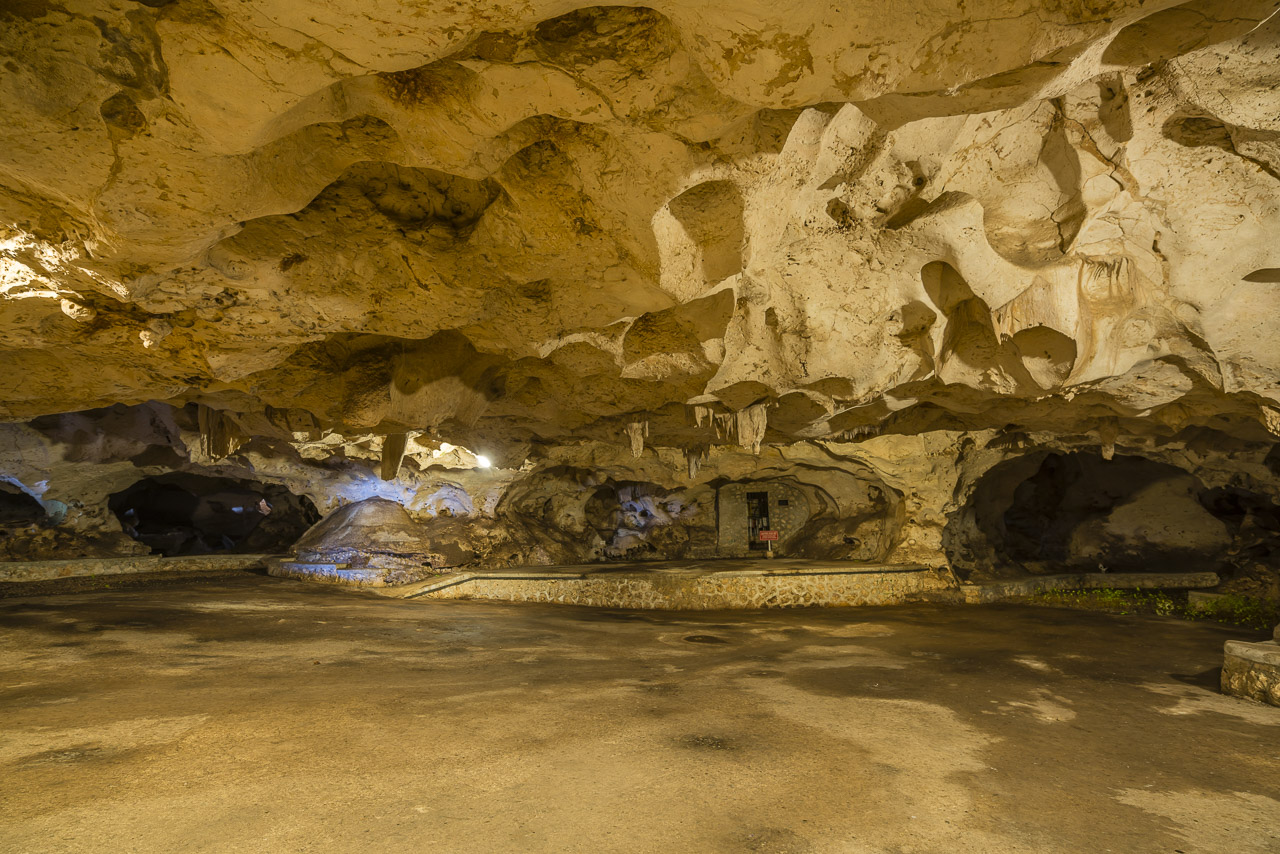 There used to be a nightclub in the Green Grotto Caves

But the strangest use of the Green Grotto caves in history was when a rich American family had ownership of the land and turned it into a nightclub.

It was the father’s dream to own a nightclub, so I guess he got his wish! Oh, the 80s.

They set up bars, dance floors, fish ponds and cement benches for people to party the night away. 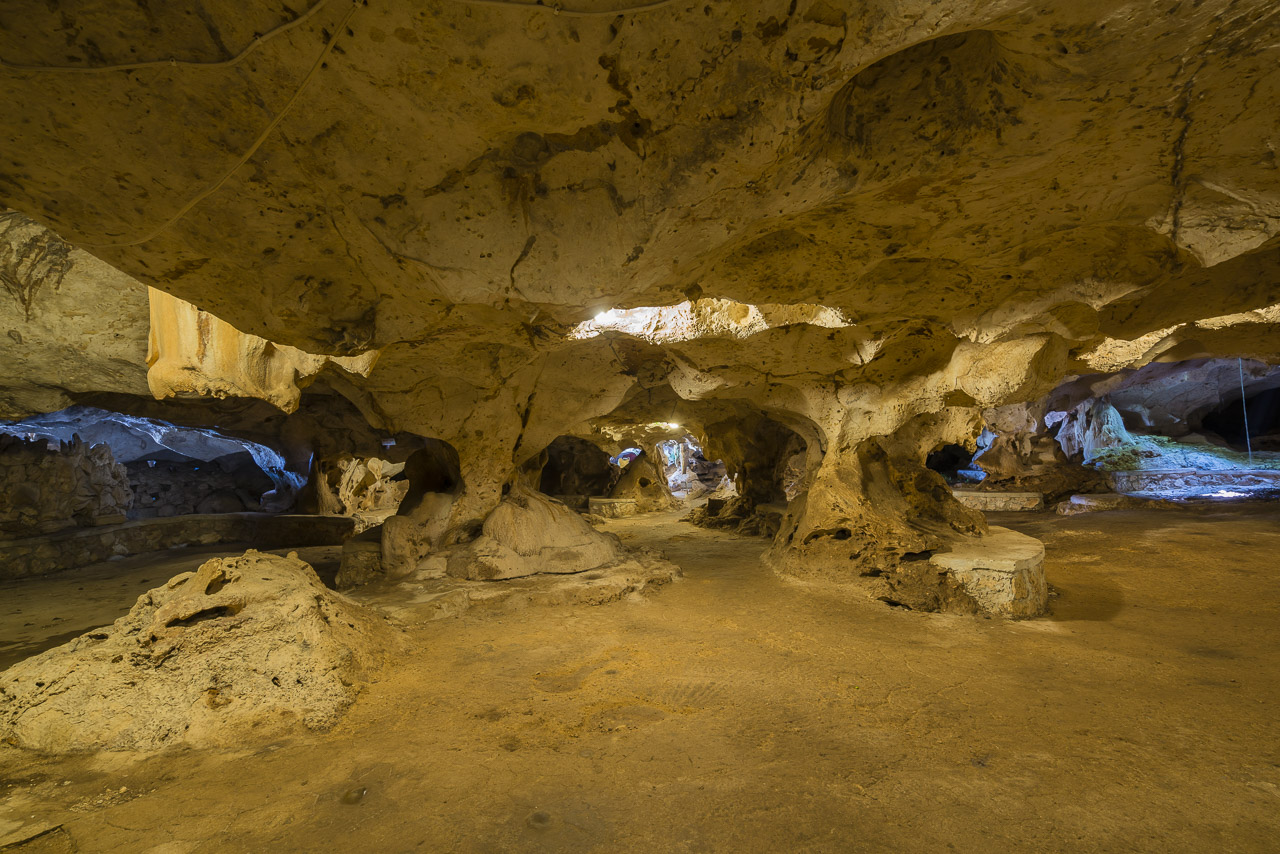 The vibration of the music wasn’t good for the fragile environment and much of the stalactites and stalagmites of the main chamber were destroyed.

Luckily, the Jamaican government regained control over the Green Grotto Caves in 1999 and have since turned it into one of Jamaica’s premier attractions.

The caves were even awarded EarthCheck’s highest accolade of Platinum Certification; the first in the Caribbean.

We started in Runaway Cave. It is the largest chamber with easy cement paths to walk along.

You can see remnants of the nightclub days including cement barstools, pools, a stage, and the dance floor. 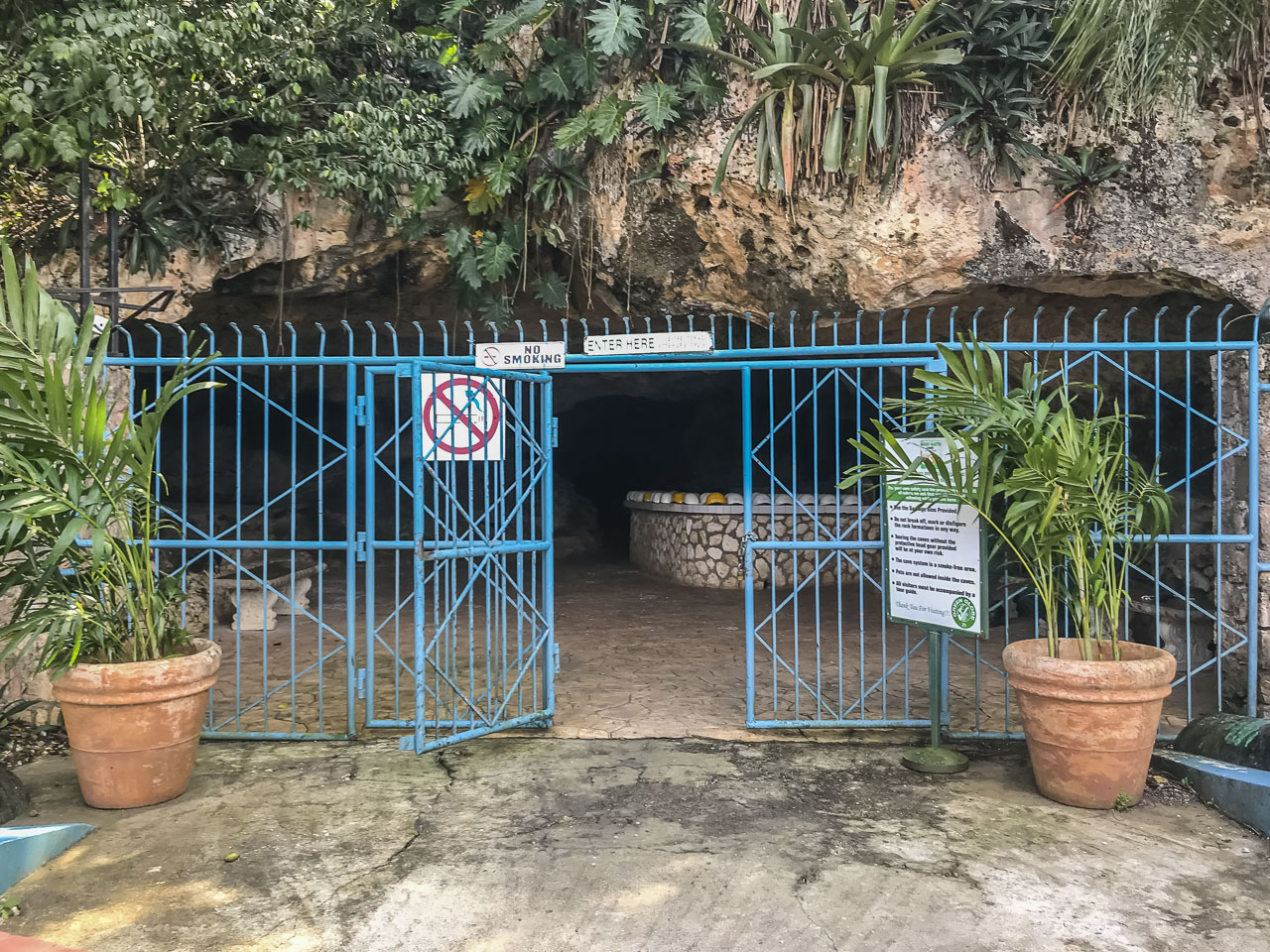 Luckily not all the cave was destroyed by the irresponsible American businessman and as we walked further along the path, there were still impressive formations.

Bridges, staircases, and pathways take you to different chambers lit with green and yellow lights to showcase the stone pillars, narrow caverns and deep holes.

There are several openings throughout where the ceilings probably caved in, where trees grow and where bats can escape to feed each night. 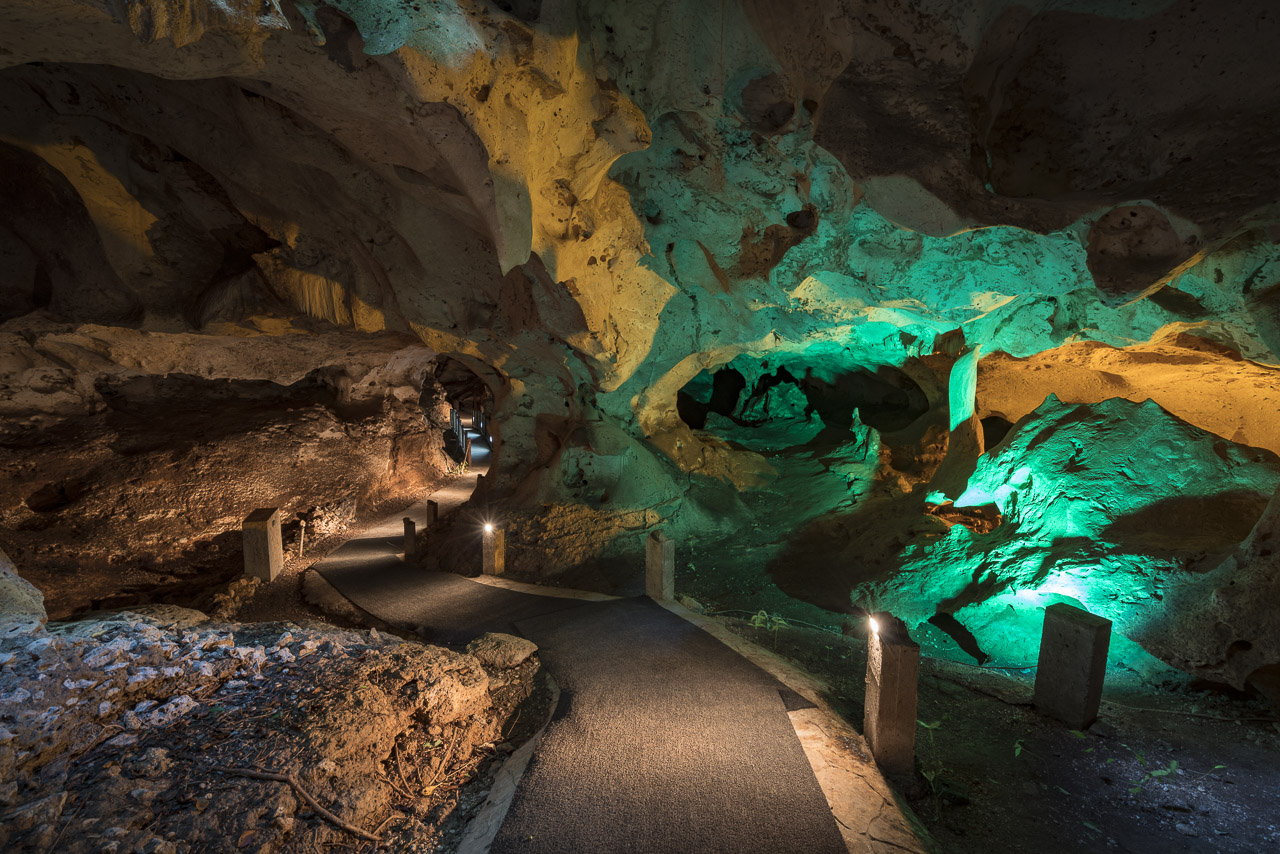 There are approximately 10 million bats within the two caves. Our guide Kevin told us that only a small portion of the system has been explored and excavated, so nobody really knows how many bats inhabit the Green Grotto Caves.

But it is important to protect them because they play a huge role in the ecosystem eating bugs and helping to pollinate crops. 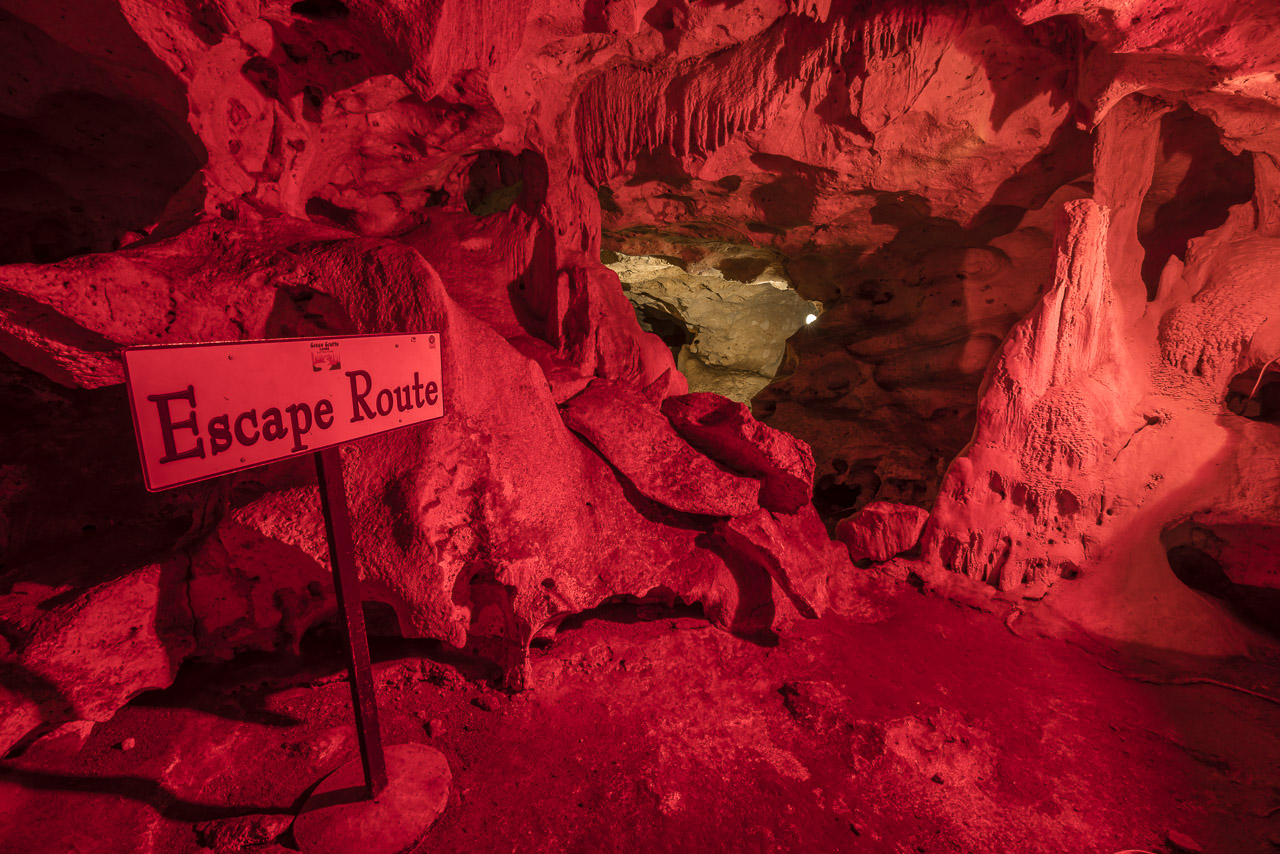 The Escape Route in the Green Grotto Caves

We were shown the escape route where the Spaniards escaped once the British discovered the caves. The escape route is a tiny cave 3 miles long that took the Spanish to the sea. I cannot imagine the courage it took to climb into that tiny black hole.

James Bond and the Green Grotto

After our tour of Runaway Cave, we walked outside to the second of our two cave tour, The Green Grotto Cave.

After some fresh air, we were at the entrance to Green Grotto where 45 feet below (15 metres) is an underground lake. The tour takes you down 65 steps to a large cavern filled with water.

When the lights are on, the stalactites reflect in the pool creating a beautiful scene.

I was trying to imagine the movie moment where James Bond and Jane Seymore are being lowered into the shark tank of Mr. Kananga’s lair but I couldn’t picture it. When I watched the scene over, Dave and I decided it had to be a different angle and they were actually filming back looking at the platform we were standing on.

Boy, did they miss a more picturesque opportunity?

The guides turn off the lights at this point to give you an idea of just how dark it is down there. I have no idea how the early settlers discovered anything.

We learned that the bat guano is combustible, so they couldn’t even bring torches down to explore for fear of lighting the place up. Everything had to be discovered and cleared by hand. 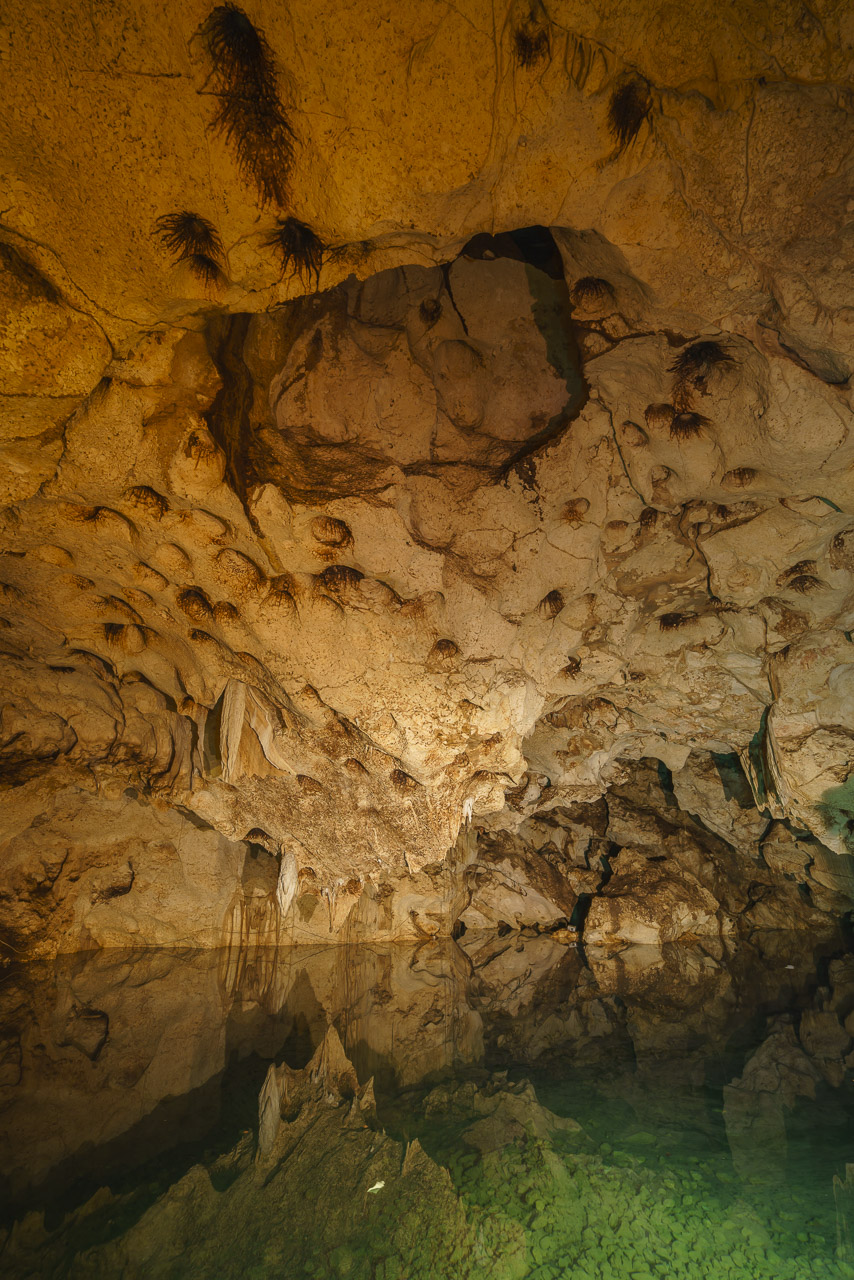 I think I’ll take my tour instead. That way I only have to envision the darkness and not walk in it.

Once we finished up at the grotto, we walked back up the 65 steps and came out to fresh air an sunshine.

The 45-minute tour was definitely worth the visit! 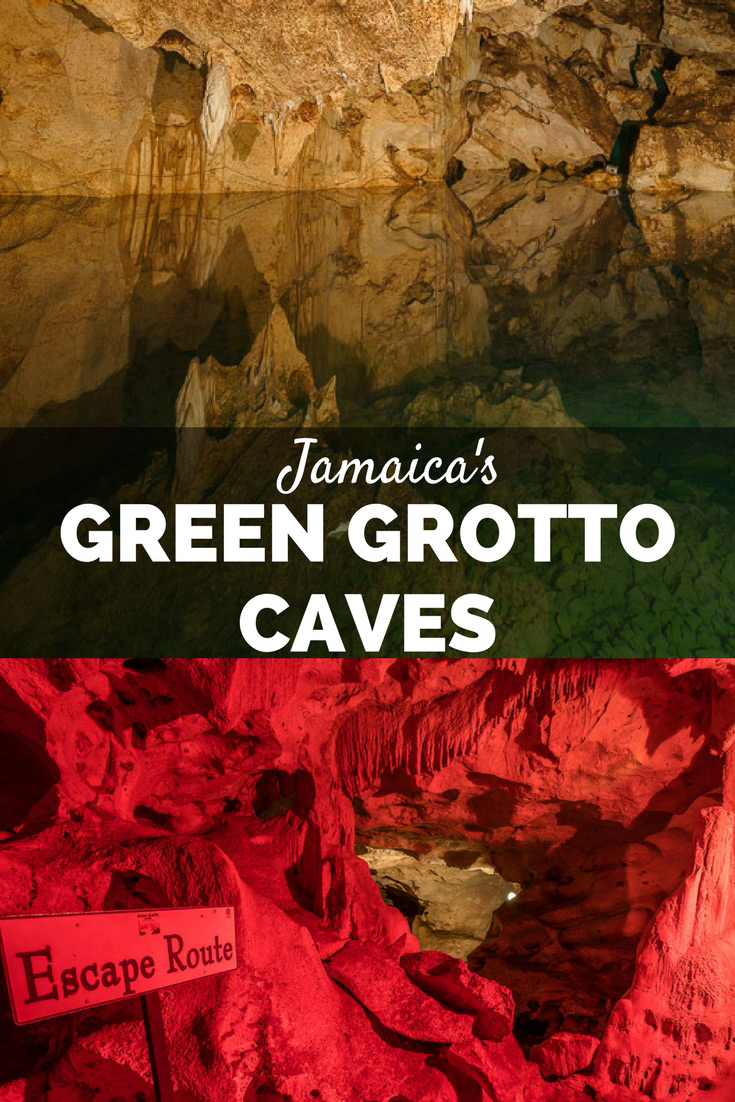 Swimming with Horses in Jamaica

14 Fun and Unique Things to do in Jamaica

Feel the Vibe Jamaica – Great Ideas to Get off the Resort