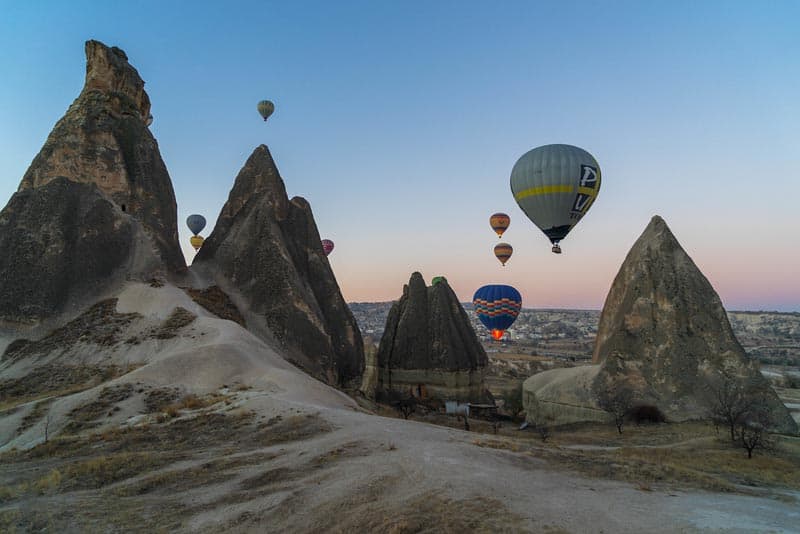 A Cappadocia hot air balloon ride is probably the most famous place on earth soar above the landscape.

It’s been a dream of ours since we first saw images of colourful balloons floating above the fairy chimneys and dotting the lunar landscape.

A Cappadocia hot air balloon flight is something you won’t soon forget. But we learned that not all flights are created equal.

It was while relaxing in Istanbul that Dave booked our first hot air balloon ride over Cappadocia via Internet.

We scoured the endless tour companies listed in our search and decided on the most expensive offering.

We thought, this is a once in a lifetime opportunity so we didn’t want to blow it.

It was low season so they gave a deal and for €140, we were automatically put in the comfort tour where they offered larger baskets with more room.

We felt great about our choice and talked our friend CBezerraPhotos into coming with us.

We were confident that we were going to have the best hot air balloon ride in all of Cappadocia.

They picked us up at our accommodation, the Kayakapi Cave Hotel, on time but when we were brought to breakfast we were a little disappointed to see a sparse display of pastries and cookies with a bit of tea and coffee.

We’ve done many hot air balloon tours around the world, and they always feed you well so we were surprised to see so little.

However, we’d always had breakfast after our balloon rides, so maybe this was just a snack. W

e weren’t too upset either way, because we were here for the flight, not the food.

Note: In Cappadocia they feed you before your hot air balloon ride, unlike all other balloon rides we’ve taken on four other continents. So our little snack beforehand turned out to be our breakfast.

We sat forever waiting for the vans to finally bring us to our launching pad.

We heard through the grapevine that some celebrity wedding was taking place and we were waiting on them, but they never showed. (Damn rich people ruining it for the rest of us!)

When we finally got in the van to go to our launch pad, it was getting late in the morning. We arrived and the balloons were already filled and many others were already in the air.

The Launch Area Makes All the Difference

The sun was already coming over the horizon and we weren’t sure if we were late because of the celebrity mix up, or if this is how they always operate.

Dave mentioned to me that we were going to miss the sunrise. I relayed our frustrations to our guide and said, “You advertise that you are the best and that is why your prices are much higher than others, so why are we taking off last?”

According to their website, Voyager Balloons has the guides who are most experienced and who are skilled enough to fly low through the fairy chimneys.

Because of their skill, they are supposed to be able to mix it up and go where other companies can’t.

The Fairy Chimneys of Cappadocia are fascinating; they reminded us of the hoodoos of Alberta

Maybe they just meant that we saw them. And we did see a lot.

We named Cappadocia one of  the most romantic getaways in the world. See where else we suggested.

On this flight we never managed to get those epic shots that everyone always sees of hundreds of Cappadocia Balloons soaring through the sky together.

We were always either higher above the balloons or right in the middle of them.

It was low season, so there were only about 100 balloons in the sky instead of the usual 150.

But the flight itself was a bit of a disappointment, due to the fact that we didn’t go through any caverns or near any spires.

I don’t want to waste too much time on this Cappadocia Hot Air Balloon experience, because we had a second chance and that second flight gave us everything we ever wanted out of Cappadocia.

Luckily, we had two chances to fly over Cappadocia in Turkey.

Our second morning in Cappadocia was organized by our hosts at travel conference we attended in Istanbul.

They booked with Royal Balloons and I’m not going to lie, I expected this flight to be worse than yesterday’s.

My expectations had dropped considerably. I assumed I booked with the best, so how could this be any better?

Plus, we weren’t going in the comfort balloons, we were all going into a regular size. Regardless, I was happy to be going up again.

The morning already started off way better than the day before.

We arrived at the hotel restaurant to a full buffet breakfast with actual tables to sit at to have a bite before our flight.

There were a lot of people in the building, but we were all broken into smaller groups and sent to different vans to join our different balloons once we filled our bellies.

We took off in a very different location than our balloon ride the day before, and were thrilled to see that as we took off, the sun was just coming up.

As we rose, we witnessed the incredible Cappadocia landscape filled with colourful hot air balloons.

Flying with Royal Balloons lived up to all our expectations.

Before our eyes was the Cappadocia Balloon filled sky I’d come to expect. It seemed that hundreds of balloons were in the sky, soaring above jagged spires and tall chimneys.

Our pilot took his time rising in the air and stayed low, getting so close to the fairy chimneys we felt as if we’d run into them.

He went through narrow gorges and jagged peaks and we all grinned with excitement as the spectacle unfolded before us. Balloons were everywhere and we seemed to have the best vantage point of all of them.

I soon realized that you must book with the right Cappadocia hot air balloon company to have the best Cappadocia experience.

If you don’t launch far away from the crowd, you’ll never see the mass of balloons above the landscape.

It also seemed to depend very much on the pilot. If the pilot doesn’t have enough experience, he can’t stay low in the valleys.

He has to go higher above the other balloons and away from any obstacles to keep safe.

The more experienced the pilot, the better flight you’ll have. If he is skilled and confident, he can soar and dive at will.

He can ride the wind through narrow gorges and close to fairy chimneys and he can take you out to see the extraordinary views.

Our second pilot also spoke better English and had a lot more to say about the landscape. I also loved his sense of humour and casual way of speaking.

I truly believe that the launching point makes all the difference. Our first flight left with many balloons and we were surrounded by other companies. We never could get away from the crowd enough to see the full spectrum of balloons.

Our second hot air balloon ride took off far away from the crowd, allowing us to view the parade of other balloons in the sky.

While our pilot was skilled, he couldn’t turn or drive the hot air balloon.

All he could do was ride the wind currents by raising and lowering the balloon to change directions with the wind. By beginning at a premier location, he already had the best vantage point.

How do you choose a Hot Air Balloon Company in Cappadocia?

Dave and I thought we did our research well. We read travel blog posts about our company and we scoured each and every website.

We were taken by the expensive price and SEO skills of the first company we went with.

They claimed to be the best and that is why their prices were higher, and we believed them. But we should have asked more questions.

Questions to Ask Before Your Hot Air Balloon Ride Over Cappadocia

Note: We booked with Royal Balloons and Voyager Balloons, and Royal gave us the better ride.

But we had read that Voyager gives good rides as well, so perhaps we didn’t ask the right questions.

Visiting Cappadocia is a once in a lifetime experience and you want to make the most of your hot air balloon flight.

We were lucky to have two opportunities. Had we not had the second day, we wouldn’t have realized what we had missed.

I honestly thought that all the grand photographs I saw were photoshopped like crazy, and just assumed that our first flight was the norm and that travel bloggers and travel writers just made up the experience.

But once I saw that a Cappadocia hot air balloon flight could be extraordinary on the second morning, I realized that it’s the pilot you are with that matters.

Perhaps the first company did have more experienced pilots, but we didn’t ask the right questions.

We just paid the most money and thought we’d get what we paid for. We learned a valuable lesson: to ask questions before committing. The Internet can lead a lot of customers astray.

Sure, if we didn’t have the second day, we would have gone away feeling fine about our flight, but by seeing what a real hot air balloon flight in Cappadocia is like, we went away mesmerized by our experience. What one would you want?

In the end, we loved our Cappadocia Hot Air Balloon Experience.

Both trips ended with a champagne toast and a chance to offer tips to our guides. I was surprised that Royal Balloons didn’t offer sticks with photographs and instead gave people actual hard copy photos.

I think they should update their photography experience and take photos of the entire trip allowing people to buy all the photos uploaded onto a stick. More people would buy for sure.

Dave and I had plenty of photographs but I am sure that others would love to give €20 Euro for memories of their Cappadocia Hot Air Balloon Experience, from take off to landing.

Have you taken a hot air balloon ride? Where was your favourite place to fly?