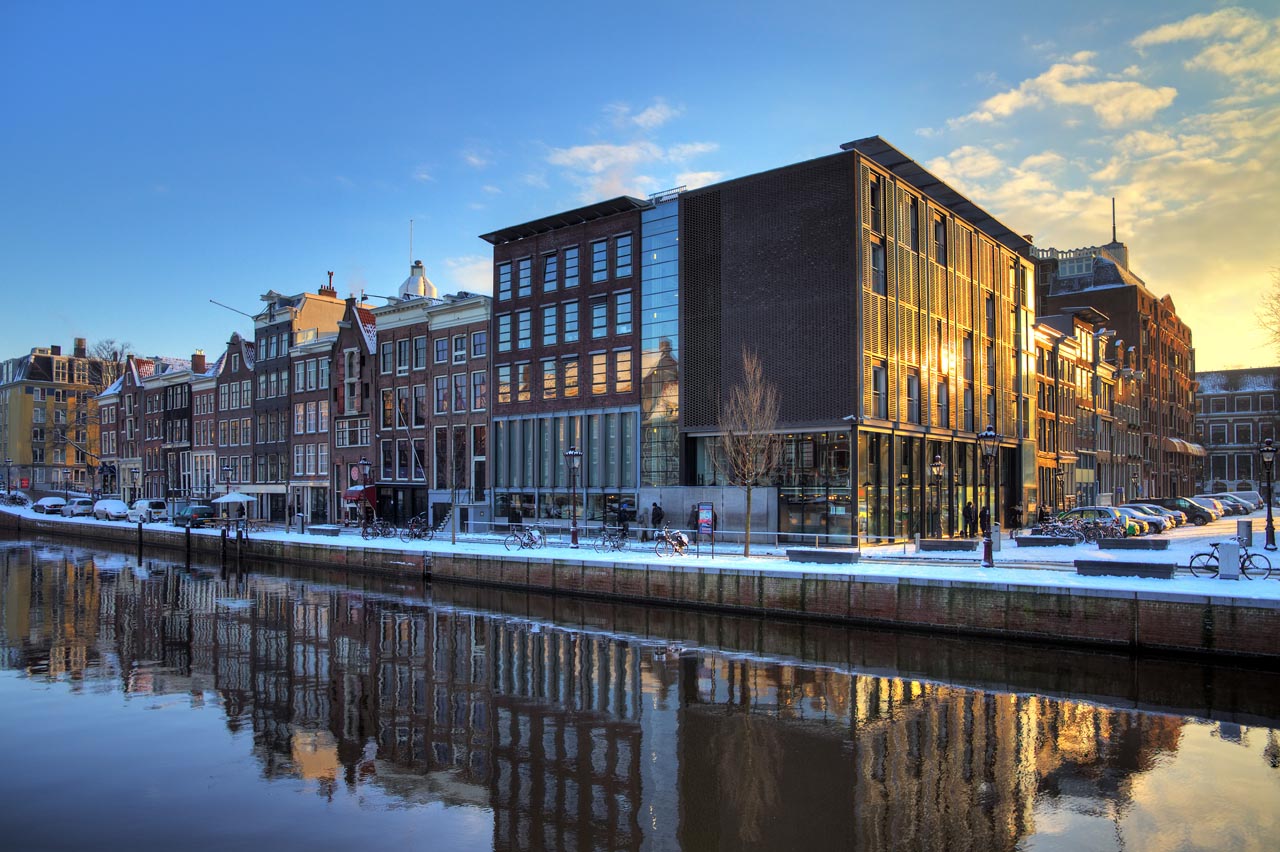 For an authentic, subdued experience at once historical and eye-opening, head to The Anne Frank House in central Amsterdam.

A Visit to Anne Frank House

Anne Frank, a Jewish girl who went into hiding during World War II to escape the Nazis, spent two long years in a secret annex on the top floor of this building.

This haunting yet beautiful house is now home to the diary that Anne wrote during her long days in hiding, along with hundreds of loose pages that chronicle her life in poetic detail.

The house is a moving space and one that should be a must-see for anyone visiting Amsterdam.

The Anne Frank House is the third most visited museum in The Netherlands.

The Jordaan District is a great place to base yourself if you want to be close to Anne Frank House.

Check out Great Places to Stay in Amsterdam for more neighborhood suggestions.

Located right on the Prinsengracht canal in the city center it is a lovely setting known for its quintessentially Dutch aesthetic.

The Anne Frank Museum is only  500 square feet in total.

It consists of the main house and the annex, which is where Anne Frank went into hiding and wrote her famous, beloved diary during World War II.

The annex, still visible today, was hidden from view by nearby houses during the war, which made it the perfect hiding place.

There are numerous exhibition spaces throughout the museum that show various pages from her notebook, a wide array of artifacts, bookcases, and former living spaces.

The main exhibition space is a thoughtful, rich tribute to the persecution and discrimination of Anne and thousands of Jews faced during the war.

Much of the museum is perfectly preserved, making the experience of visiting incredibly authentic, if not slightly haunting.

Since its initial opening in 1960, The Anne Frank House has been attracting thousands of visitors each year—and in 2007, that number reached a million!

The Anne Frank House is a biographical museum and former hiding place of the famous Jewish diarist Anne Frank.

Read it now and order on amazin

Two Hour History of Anne Frank Walking Tour – Take a tour of the Jewish Quarter while listening to stories from Anne Frank's diary while visiting WWII monuments. (free cancelation up to 24 hours in advance)

Anne Frank Story, Private Tour – Take a Private Tour through the neighborhood where Anne lived on this private tour with an expert guide. (Cancellation up to 3 days before the tour.)

Anne Frank, a young Jewish girl, hid from the Nazis with her family and eight other people in the “secret annex” of this 17th-century canal house during World War II.

Anne remained hidden in the annex for two years and one month until the Nazi authorities raided the space, arrested her and others she was in hiding with.

They were deported them to concentration camps—which ultimately led to her death.

In 1947, Anne posthumously became world famous because of the diary she wrote while in hiding.

The diary, a detailed account of daily events, along with her fears, hopes, and dreams, has come to be loved by millions around the world not only because of the acute insight it offers about the nature of man, but because it’s beautifully written.

The house itself was originally built as a private residence, but over time assumed a number of different purposes including a warehouse, and then even a place to house horses.

At the start of the 20th-century, the house was used by a manufacturer of household appliances, then followed by a piano producer.

In 1955, protesters stood outside of the building and fought against its demolition (it worked).

Afterward, the Anne Frank Foundation was established with the goal of protecting the property from development and demolition.

The museum first opened in 1960, and part of what makes it so special is the fact that the annex, Anne’s hiding place, is completely preserved.

A permanent collection has since been developed, but special care has been taken to not have it overshadow the special ambiance of the place.

The permanent collection, a detailed tribute to her life, gives visitors an authentic glimpse into the strong mind of this extraordinary girl.

Visitors have the chance to wander through the museum’s many rooms, nooks and crannies to get a real sense of Anne Frank’s experience.

Though quotes, photos, videos, and a wide range of original items (including her beloved diary), Anne Frank is brought to life in an authentic yet respectful way. It’s an experience that shouldn’t be missed.

The house’s steep stairwells and original artifacts are incredibly moving—they seem to pull you back in time.

The map that Anne Frank’s father, Otto, drew on to predict the path of invasion is sure to pull at your heartstrings, for example, and remind you of the atrocities faced.

The pictures taped to the walls of Anne’s bedroom do this as well, offering not only a better understanding of an incredible person but the opportunity to reflect on the resilience of the human spirit at large.

Visitors can wander freely throughout the house, so be sure to take as much in as you can. Also, don’t miss the hinged bookcase and the secret entrance to the annex behind it—it’s extraordinary.

Tickets to The Anne Frank House are sold online and allocated for specific time slots—so be sure to show up on time!

Because the house is so popular, crowds are common, but they do seem to disappear once inside thanks to the time slots, along with a quiet and calm atmosphere.

Once inside, there is a free audio tour that certainly deepens the experience, so we highly recommend it.

Photography is not allowed inside the museum in order to preserve the quality of the artifacts. Leave your camera at home.

Also, since there are many narrow stairwells, the house isn’t recommended for people with mobility issues.

Above all, visit The Anne Frank House with an open heart and mind; it’s a little slice of a very important part of history that we all would benefit from knowing more about.

Where to Stay in Paris