Where To Stay In Amsterdam – The Best Areas & Neighbourhoods 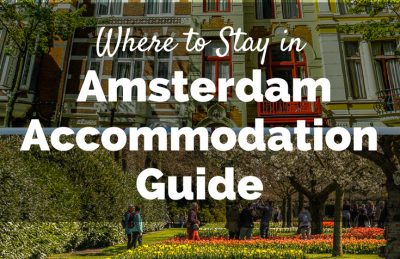 16 million people visit Amsterdam each year for its tulips, cheese, windmills, and a notoriously open approach to everything.

This can make deciding where to stay in Amsterdam quite the challenge.

Because of this, you will want some guidance on where the best areas to stay in Amsterdam are and which ones you should avoid.

We asked local Amsterdam expert Melissa Adams to create a guide on where to stay in the city center and share her what to do in Amsterdam for the first time visitor.

The Top Neighborhoods to Stay in Amsterdam?

Whether you want to know where to get the best food or the best neighborhood in Amsterdam to explore the history and museums, this guide will help you plan your next visit.

We get a lot of the same questions from readers when they are looking for a place to stay in Amsterdam and thought we would answer them first.

We’ve done the work for you. If you want to skip directly to searching the best hotels in Amsterdam, here are a few ideas worth visiting.

1. The Historic Old Center – the best area to stay in Amsterdam for first-time visitors

the Historic Old Center of Amsterdam is one of the best places to stay in Amsterdam for first time visitors. If you want to be in the heart of it all then this is where you want to base yourself

The historic city center radiates from Dam Square, where a dam kept the city from flooding in the 13th century. It is of the oldest and most beautiful parts of the city.

It is punctuated with coffee shops, peep shows, brothels and prostitutes in red-lit windows, interspersed with fine restaurants, historic churches, and a craft brewery.

Top Things to do in the Old Centrum

De Wallen is Amsterdam’s largest Red Light District and is a popular haunt for a roving bachelor and bachelorette parties on weekends.

Royal Palace:  Once occupied by Napoleon, it’s now the only palace in the Netherlands that’s both open to the public and still used for royal receptions.

Dam Square: Amsterdam’s beating heart marks the site where a dam built between two dikes in 1270 prevented the city from flooding.

How to Get to the Historic District in Amsterdam

Amsterdam Central Station is the city’s main public transportation hub. Virtually all GVB trams and buses start their route in front of the station, which faces the historic center. Most also stop at Dam Square in the center of town.

2. The Jordaan – Best Upscale Neighborhood to Stay in Amsterdam

Once renowned for radical politics and rowdy sing-a-longs, the Jordaan has evolved over decades of gentrification from a working-class area into an upscale neighborhood for arty professionals.

With its cobbled streets, gabled homes and tree-lined canals, the picturesque district is a living picture postcard with an eclectic mix of art galleries, sidewalk bistros, and trendy boutiques.

Beginning at Brouwersgracht just west of Central Station, the Jordaan arches around the western Canal Ring between Prinsengracht and Lijnbaansgracht, ending at Leidsegracht.

This is by far the coolest district in Amsterdam to stay in.

Things to See in The Jordaan

The Anne Frank House: Amsterdam’s top tourist attraction preserves the legacy of the teen diarist who chronicled life in the secret annex on the Prinsengracht from 1942–1944. An online reservation will save hours of standing in line.

Papeneiland: Bill Clinton famously devoured a hunk of apple pie in this family-owned café that’s been proffering draft ales and Dutch fare since 1642. It retains its 17th-century authenticity on one of the Jordaan’s prettiest corners.

Getting to the Jordaan in Amsterdam

Exit Tram 13, 14 or 17 at Westermarkt or Marnixstraat. Serene residential streets stretch to the north, bordered by an eclectic assortment of shops and cafés along Rozengracht.

3. Museum District / Oud-Zuid – Where to Stay in Amsterdam on a Budget

Three repositories of iconic art—The Rijksmuseum, Van Gogh Museum and Stedelijk Museum—as well as many smaller galleries and the world-renowned Concertgebouw, are set on Museumplein.

This area has a great selection of budget accommodation and food. If you are looking to save a little cash in an already expensive city then stay in this area of Amsterdam.

Places to see near the Oud-Zuid

Getting to the Museum District

Tram 2 travels along Amsterdam’s central spine, from Central Station to Museumplein, passing some of the city’s best-known landmarks, squares, and shopping areas. Tram 1 follows the same route until Leidseplein,Tram 5 continues to the Rijksmuseum. Busses 170 and 172 also stop at Leidseplein.

4. The Oud-West – Where to Stay in Amsterdam for Foodies

Like the neighboring Jordaan, the Oud-West developed as a result of rapid urban expansion.

After a decade of gentrification that began in the late 19th century, it’s now a multicultural blend of residential neighborhoods served by a plethora of Moroccan and Turkish shops and cafés, interspersed with Dutch pubs and other ethnic eateries.

Just far enough from Dam Square to be outside the major tourist zone but with easy access to all popular attractions.

It’s a good option if you’re looking for a local taste of Amsterdam in a dynamic neighborhood many visitors neglect. A 5-minute tram ride or 15-minute walk gets you to the center of town.

Things to See in The Oud-West

Hollandsche Manege: Since 1882, the Netherlands’ national riding school has been housed in a neoclassical structure inspired by Vienna’s Spanish Riding School in Amsterdam’s Oud-West.

De Hallen: Since opening in 2014, this transformed turn-of-the-century tram depot has become one of Amsterdam’s most popular hotspots.

Ten Katemarkt: Smaller than the Albert Cuypmarkt but just as diverse in offerings, this street market off Kinkerstraat has a true local vibe.

5. De Pijp – Best Place to Stay in Amsterdam for a Local Experience

Students, artists, yuppies, and immigrants from some 150 nationalities discovered De Pijp in the 1960s, establishing the area as Amsterdam’s colorful Latin Quarter.

While no one really knows what De Pijp stands for, some surmise it owes its name to the district’s long narrow streets that resemble pipes or to the “Pipe,” the gas company that once supplied energy to the area.

Removed from central Amsterdam’s tourist throngs, De Pijp is now a pastiche of cultures and nationalities.

Things to see in De Pijp

Taart van mijn Tante: Experience sensory overload in a fantasy tearoom replete with kitsch, cakes with sassy names like “Chocolate Bitch Pie,” and a mishmash of colorful crockery and furniture.

Sarphatipark: Jewish philanthropist Samuel Sarphati took the initiative for the construction of this manicured neighborhood park.

Heineken Experience: Even Amsterdam Marketing suggests you get drunk before visiting this homage to a beer now produced by a multinational firm, concluding it “must have been arranged by people who had too much beer themselves.”

How to get to to De Pijp in Amsterdam

From Central Station, take tram 24 to Marie Heinekenplein or tram 4 to Stadhouderskade.

6. The Old Jewish Quarter / Plantage – Best Area to Stay in Amsterdam for Families

Amsterdam has been a sanctuary for Jews since the 16th century. The first influx came after the Spanish and Portuguese Inquisitions, a second from being pushed from Germany, Poland, and Russia by antisemitic regimes.

Regardless of origin, most early Jewish immigrants settled around Waterlooplein, where Rembrandt lived at the height of his fame.

Just east of Waterlooplein, De Plantage provides a stark contrast to the medieval cobblestones and canals of the Grachtengordel.

Home to Artis Royal Zoo and Hortus Botanical Gardens, it’s greener and less touristy than Amsterdam’s historic center, with leafy boulevards and elegant squares. This is a great Amsterdam neighborhood to base yourself if you are visiting with kids.

Jewish Historical Museum: In four restored 17th– and 18th-century synagogues, this museum traces the history of the Jews in Holland, with a special wing for children.

Amsterdam Resistance Museum: Holocaust lore and exhibits about the Netherlands’ role in World War II are the focus of this thoughtful perspective of Holland during Hitler’s tyrannical reign.

Rembrandthuis: See where the Netherlands’ greatest artist lived and worked for 20 years in this meticulously refurbished home with an extensive collection of Rembrandt’s etchings.

From Central Station take tram 9 or Metro 53 to Waterlooplein.

Unlike the postcard-perfect vistas of Amsterdam’s 17th-century Grachtengordel, Noord is a blustery expanse of open spaces, angular structures, and cutting-edge architecture.

A dilapidated shipyard in the 1980s, the newly hip neighborhood across the Ij River is now home to creative businesses like Discovery Channel and MTV, as well as waterside restaurants, the EYE Film Institute and A’dam Lookout.

Cycling along the Ijsselmeer coast to Durgerdam offers pastoral views and the chance to refuel at Café ‘t Sluisje at the end of Niewendammerdijk, serving Dutch apple pie in a 500-year-old building.

Things to See in Amsterdam Noord

IJ Kantine: Casual fare is served in a former assembly warehouse that was once a cafeteria for NDSM shipbuilders.

GeWoonboot: Adjacent to Noorderlicht, visit a self-sustaining houseboat with its own heating, electric and water purification systems.

De Pannenkoekenboot: Take a 75-minute cruise along the IJ fueled by as many Dutch pancakes as you can consume.

Reaching Noord: From the north side of Amsterdam Central Station, free GVB ferries transport people, bikes and scooters across the Ij River to Amsterdam-Noord.

The last ferry returns to Central Station at 1 am on Fridays and Saturdays.

Whatever brings you to this water-laced global village, you’re likely to be awed by Amsterdam’s Golden Age mansions, enchanting canals (which outnumber those in Venice) and historic landmarks that recall the medieval fishing village on the Amstel River.

It is a place you will want to visit again and again.

Where should you stay in Amsterdam for the first time?

If you want to be in the heart of it all then the Historic Center or Old Centrum around Dam Square is where you will want to base yourself.

Where to Stay in Amsterdam on a budget?

Oud-Zuid would be the best for those on a budget. Close to almost everything but lots of choice for those that are budget conscious.

Where to stay in Amsterdam with family?

Plantage is the perfect place to stay if you have kids. Close to everything without the hustle and bustle.

Where to stay in Amsterdam for Nightlife?

Base yourself either in the historic district near Leidseplein or in De Pijp if great nightlife is a priority for you.

Planning a trip to Amsterdam? You may want to read other articles:

Many people include Amsterdam with other European Cities. Let theses city guides help you plan your European vacation. 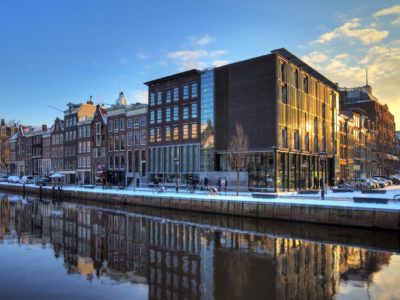 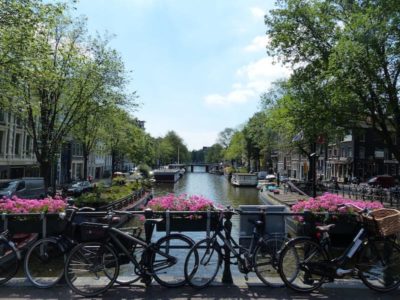 Melissa Adams is an American photojournalist who traded sunny Newport Beach, California for the soggy patch on the European continent that captured her heart in 2007. Now based in Amsterdam, she explores the hidden gems, sexy secrets and colorful culture of her adopted city at UnClogged in Amsterdam: An American Expat Plumbs Holland. Follow Melissa at UnCloggedBlog