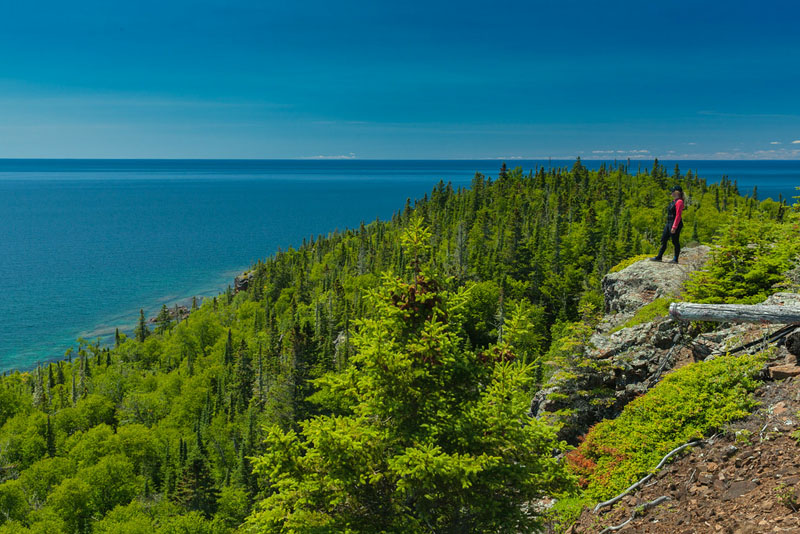 The Slate Islands are located 13 km off the North Shore of Lake Superior, and to visit is an adventure you will never forget.

Imagine visiting a group of islands where you can witness rare wildlife and Arctic tundra plant life while paddling around dramatic sea cliffs in the middle of the world's largest freshwater lake.

This magical place is known as the slate islands, and we took a four-day canoe trip around the island in search of woodland caribou.

Things to do in the Slate Islands of Lake Superior

The Slate Islands are home to the densest population of woodland caribou in Ontario.

They are also home to the cutest population of snowshoe hare, plus it houses the world's largest shatter rock cone.

Paddling The Slate Islands will keep you occupied for days as you canoe within the safety of the interior passageways or venture out to open sea while circumnavigating Patterson or Mortimer Island.

Lake Superior may be a lake, but it feels more like a sea.

It's known for its menacing fog, treacherous storms, and unforgiving waters.

We would not have to worry about any choppy water while kayaking the Slate Islands, the beauty of paddling here is that you can venture out to open water on calm days and stay inside the islands on not so perfect days at sea.

We caught a shuttle to the Slate Islands from Terrace Bay.

The boat that carried all our gear, and our kayaks to the Slate Islands that we booked and rented through Naturally Superior Adventures.

We spent 5 days exploring the two main islands of Patterson and Mortimer.

There are five other smaller islands that make up the Slate Islands, and we saw many a fascinating sight.

Inner Slate Islands – Things to Do

If you are going to Northern Ontario, make sure to add the Slate Islands onto your list!

The number one attraction on the Slate Islands is the woodland caribou.

They house the densest population of caribou in Ontario and chances of spotting a few when you are on the islands are very good. Especially if you have a guide that knows where they like to hang out.

We saw 9 caribou during our visit!

Our guide from Naturally Superior Adventures knew exactly where the caribou would be.

Within 10 minutes of being dropped off at our campsite by the shuttle, a caribou ran right through.

If you are interested in Geology, this group of islands is the place for you! Shatter cones can be found throughout the Slates.

The Slate Islands were created by a meteorite impact somewhere between 400-800 million years ago that formed a crater.

They were formed in bedrock by shock waves created by meteorite impacts.

The shock waves created a conical shape in the rocks with thin grooves radiating from the top of the cone.

The largest one we saw was 9 (30 feet) meters high. Making it one of the largest examples of shatter cones in the world.

The Slate Islands used to have a thriving mining and lumber industry.

Until the 1930s copper was mined here and there are still signs of abandoned mines all over the islands.

At Lambton Cove, you can actually walk into an old mine and take a short walk down a dark tunnel.

There is a deep shaft at the end so don't get too close. Or better test, hire a guide.

Many researchers have been to the islands over the years studying the caribou.

They used to round up the caribou and herd them into a corral to count, tag, and check their health.

It's fascinating to see the old research stations around the islands.

There's even a spot where you can see artifacts gathered from the area on display at a campsite.

It's displayed on the honor system, so you'll see a table full of interesting goodies with no security or chains.

So please be on your best behavior.

One of the cutest things we saw on our kayaking tour of the Slate Islands was the snowshoe hare.

These little guys have no fear of people and were often hopping into our camp.

The animals that live on the Slate Islands have no natural predators so they are not afraid of humans. Even after you set up camp, they will continue to go about their business.

You can spend hours watching them munch and play with one another. We got a kick out of one hare jumping straight up into the air whenever another approached.

Even though the Slate Islands are not located in the Arctic, you can find plant life here that is normally only found in the Arctic.

This is because of the cooling effect of Lake Superior.

When we were there, the water temperature was a mere 3 degrees Celcius.

Being a cluster of islands in the middle of all that cold water makes for some harsh conditions that only the heartiest of plants can survive.

It creates a very unique eco-system. Some of the plants on the Slates aren't found again until you go another 1600 km north!

Exploring by kayak lets you move around the islands and set up camp in different places.

After spending a few days in the inner islands, we worked our way to the outer Slate islands.

There is zero light pollution out on the slate islands so the night sky is amazing!

We had a clear view of the Milky Way. The sky was so clear, stars were dancing in the dark.

If you are into night photography, this is the place to be!

The sea cliffs on the Slate Islands are quite beautiful. Especially when you get outside the inner island channels.

It's worth exploring outside the safety of the interior of the islands to see the beauty of the wild shore of Patterson Island.

When paddling out there, it feels like you are at the end of the world.

There is nothing but open water for as far as the eye can see.

You truly are sitting on the world's largest lake and you realize just how small you are.

It is comforting to see the high cliffs on the shore.

We saw bald eagles fly overhead as we looked on in awe at the unique beauty of the Patterson Island coast.

The highest lighthouse on Lake Superior can be found on Patterson Island.

Patterson Island is the largest of the Slate Islands and the lighthouse keepers quarters are also found here.

We paddled until lunch around the outer coast to reach Sunday Point.

It's a picturesque landscape with the bright red and white lighthouse standing proudly over the lighthouse keepers quarters.

Like most other lighthouses on the Canadian side of the Great Lakes, this lighthouse is not operational anymore.

With the technology of today, lighthouses have grown redundant and the government is cutting all funding to maintain them.

Lucky for us, the family of the last lighthouse keeper still holds the lease on the land and keeps the light going with solar power.

They also maintain the buildings keeping them beautiful.

I hope the government finds a way to keep the lighthouses around, they are a part of our history and heritage and they are beautiful stops on anyone's travel itinerary.

Caribou are so nice, we had to mention twice!

Yes, you can see caribou on the outer coast of the Slate Islands as well.

We saw several caribou walking along the beach and while paddling.

But the most special moment came when we had a very curious caribou enter our camp and stick around for quite a while as we slept on the outer shore of Patterson island.

In total, we saw 9 caribou on the Slate Islands.

We didn't manage to snap a shot of the males with antlers that ran through our camps quickly, but luckily we caught them on film.

If you watch the video above, you'll be able to see them.

An interesting phenomenon on the Slate Islands is rock pits known as Pukaskwa Pits.

These mysterious pits are located all along the North Coast of Lake Superior and you can see one on the cobblestone beach of Mortimer Island.

Pukaskwa Pits date back 5000 to 10,000 years and were believed to be created by ancestors of the Ojibway People.

Nobody knows exactly what they were used for.

Whatever they are, it's fascinating that they have stood the test of time and that they are just sitting there for anyone to explore.

If you are a fan of deserted beaches, the Slate Islands are for you! Our guide Jen even had the courage to go for a dip!

What I love about the beaches is that they are pebble beaches.

There isn't any fine sand that can make a mess in your tent, but the pebbles are so smooth they're comfortable to sit and sleep on.

The beaches are long, beautiful and deserted.

Map of our Slate Islands Adventure

To book your canoe, kayak, or hiking on the shores of Lake Superior, Naturally Superior Adventures website. It’s a great weekend getaway too!

For tourism information on the North Shore of Lake Superior and Sault Ste Marie, check out the Algoma Country and Visit Northern Eastern Ontario

The Best of the Lake Superior Circle Tour