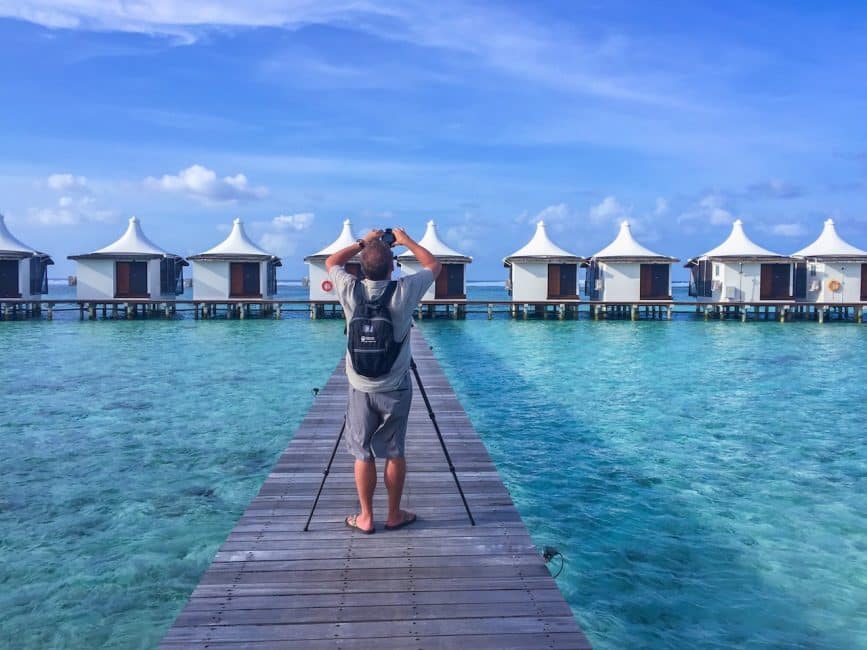 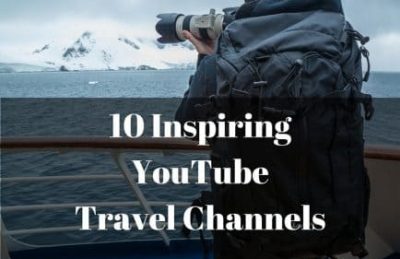 Last week GrrlTraveler shared a with us list of the best travel channels on Youtube. We loved finding new people follow, as well as seeing that some of our friends and favourites were on. She even included us (without us asking her to) which was awesome! Thank you!

While Christine had a strict criteria for her choices for the best travel channel like consistent updates, niche, and channels that bring a new spin on the word Travel Show – (She has a TV producing background after all).

We chose our list from the people that we watch regularly, have entertaining videos and personalities and do creative work.

Note: The list. below, was literally written as the names popped into our heads. We didn’t decide who should go first or last, we just wrote as we thought about the travel channels that we subscribe to. They are all fabulous and all offer amazing travel inspiration.

10 Most Inspiring YouTubers in Travel

These travel youtubers and Christine’s list are the Travel channels that make us want to travel and I know they will do the same for you.

Mike is one of the most innovative storytellers in travel on YouTube. With his unique editing, fantastic footage and wild sense of adventure you’ll love watching his videos from around the world.

Because of his high production value, Mike is hired a lot for companies and brands to make professional travel videos on their channels.

Arienne has burst onto the scene in the past year, but we’ve known her for quite some time.

Winning the Best in Travel at Last Year’s Buffer Festival in Toronto (this is considered the Oscars of YouTube Travel) she has gone none stop producing quality videos.

Her 8 part video series highlights her climb of Mount Kilimanjaro with World Vision Canada. Her videos are professional quality and she is highly sought after by brands and destinations to produce travel videos.

Gareth travels slow and really delves into the destination that he visits. Tourist2Townie travelled extensively in Brazil and became a sensation in Brazil.

While visiting a Rio favela, we even saw his logo plastered on the walls of the community. Now that’s fame!

He’s now left South America and is bigger than ever traveling the world and sharing his video series from each country he visits on his exceptional travel channel.

Will covers everything travel. From what travel gear he uses, to giving you inspiration to create your own trips.

We love his editing style, use of drones and the feeling of taking you into the destination as you travel along.

Matthew Karsten is the king of adventure travel doing everything from diving with sharks in South Africa (without a cage) to trekking solo across Greenland. If you want inspiration or need some motivation to get your lazy butt off the couch, check out his videos that he’s posted from his past five years of travelling around the world.

Steve is another travel videographer with high production value on his travel channel that is sought after by tourism board and travel brands.

He speaks around the world about making travel videos and produces his videos in both English and German. He’s also got a great sense of humour and is an all-around nice guy.

7. Be My Travel Muse

Kristin is one of the top female travel bloggers and is making waves in the travel vlogging world now too!

Travel along with your laid back vibe as she goes around the world to places like the Philippines and Mexico to everywhere in between.

She does adventure travels and we love how she chats directly to the audience making you feel like a friend.

DevonSupertramp has a massive following similar to his pal FunforLouis. While Fun for Louis is a daily vlog, Devon Supertramp’s videos feel more like a high budget movie trailer for destinations.

His stuff is definitely the style we like and as far as travel channels out there he’s the tops.

David Hoffmann has been traveling the world since 2008. We met him in Istanbul and since that time his YouTube Channel that focuses on food and travel has skyrocketed!

With videos uploaded nearly every day from 77 countries and over 1,000 destinations, you’ll never run out of things to watch!

Brendan has a great mix of photography tuturials and day vlogging.

Mixing his talents for photography and his great sense of humour, he has been able to carve out a unique niche that has attracted a large following.

If you love to take pictures of your travels, you’ll love his getting the shots series “Where he explains how he takes his breathtaking images.

Adam and Hanna are that dreamy couple that you see on commercials showcasing exotic destinations. They were made for starring in their own travel channel.

We love going to island destinations with them as they showcase beautiful locales with their drone work and fanstastic cinematography.

Kristin and Shadi specialize in resort tours and when we book vacations, we check out their travel channel first.

Shadi is a graphic artist by trade, so his work is second to none. When you watch their travel videos, you feel like you are watching a Club Med advertisement and will want to book a luxurious getaway right now!

Alesha and Jarryd are an Australian adventure couple that have been on the go for since meeting in a hostel in 2008.

They’ve recently returned home after a decade of traveling the world and are showcasing their life in a van through fun videos.

We love their organic style and sense of adventure in their videos.

Chris is a fellow Canuck who shares his love for travel through his cinematic style and very sexy voiceovers. (this is Deb talking here 🙂

I feel like I am watching a full on travel show when watching Chris as he covers everything from adventure to food, culture and city guides.

Cailin was one of the first travel bloggers/youtubers we ever discovered. Coming from a film and TV background she puts a lot of information and personality into her videos.

Cailin is a fellow Canuck who has a great sense of humour and a talent for storytelling. Coming from a film and tv background, she makes her travel videos feel like a proper documentary-like one of our favourites the Tomatino Festival.

Cameron is the son of one of the world’s top travel writers, Heather Greenwood Davis and he is going to be a star.

While still in school, he’s been producing travel vlogs about travels that he’s been on with his family.

He’s been branching out recently from travel to tackle subjects like racism, the importance of youth voices, and even showing off his talents in video games.

While you are browsing, check out our travel channel on YouTube. We put up new videos every week.

We have adventure travel videos from all seven continents doing everything kayaking in Antarctica and learning to whitewater kayak, to taking a luxury train journey through the Rocky Mountains.

Give us a Follow us on YouTube: We’ve posted nearly 400 videos on our Travel Channel from our 100+ countries visited. You’ll have hours of entertainment and a few laughs.

If you haven’t noticed, there are a lot of Canadians on this list. I didn’t know it until I compiled this one but clearly We Canucks tend to have a lot of love for each other. This list is also not in a particular order.

Do you have a favourite YouTube Travel Channel? Make sure to leave a link in the comments below. We’ll keep adding as we find them!

Who is the best travel vlogger?

That’s a subjective question. If you go by subscribers,