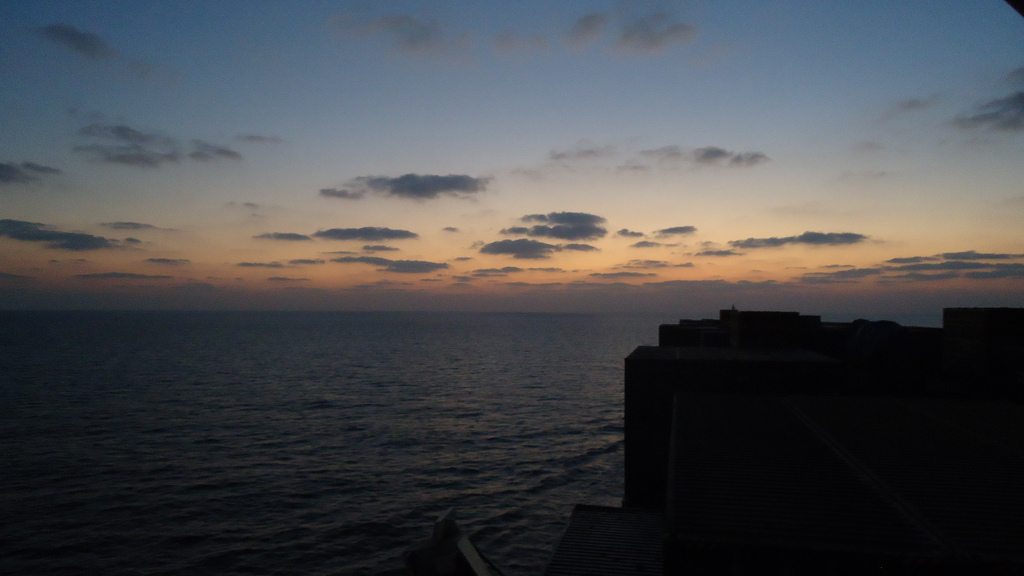 When Maria Stall wrote an article for us about Travelling by Cargo Ship, we were surprised by the response. People were very excited about this alternative way of travelling and more information about it is in such demand that Maria has put out a book about it….

But then I read his article and thoroughly enjoyed it. It is a very different experience than Maria's and we love sharing unique and exciting ways to travel with our readers, so here you go!

Travel Cargo Ship Is An Awesome Way to Get Around

I'd just spent the last four months cycling across India on my dilapidated mountain bike and wanted to cross the Arabian Sea without getting on a plane – I'd been travelling for over a year without one, starting in Indonesia.  Having organised a container cruise through a Swiss company it was now time to get my ailing and squealing bike from my hostel in town to the Nhava Sheva docks.

That day was spent waiting for hours in car parks and container fields, presumably because those were what I was supposed to be during each successive stage of the administrative process. But suddenly, at sunset, I was clambering up the gangplank, and then I was on board. A passenger of the CMA CGM Coral.

I immediately met the disembarking group: two other cycle tourists. In the frantic minutes of our brief encounter we exchanged maps, currency, tips and itinerates: we were riding almost identical trips but in reverse directions. I later discovered that the ‘small change' UAE dirhams they handed me (they'd boarded at Dubai) were worth almost $50. I love cycle tourists.

For the next six days, life on board was like living in the hotel from ‘The Shining' (halls of blood not-withstanding), or on the mining ship Red Dwarf. The few people on board weren't enough to even half-fill the massive floating office-block and they were pretty much always working on far-flung regions of the 280 metre long ship anyway.

In fact, at times I worried that I was actually on board the spaceship from ‘2001: A Space Odyssey' and that some computer was about to switch off the life-support system. 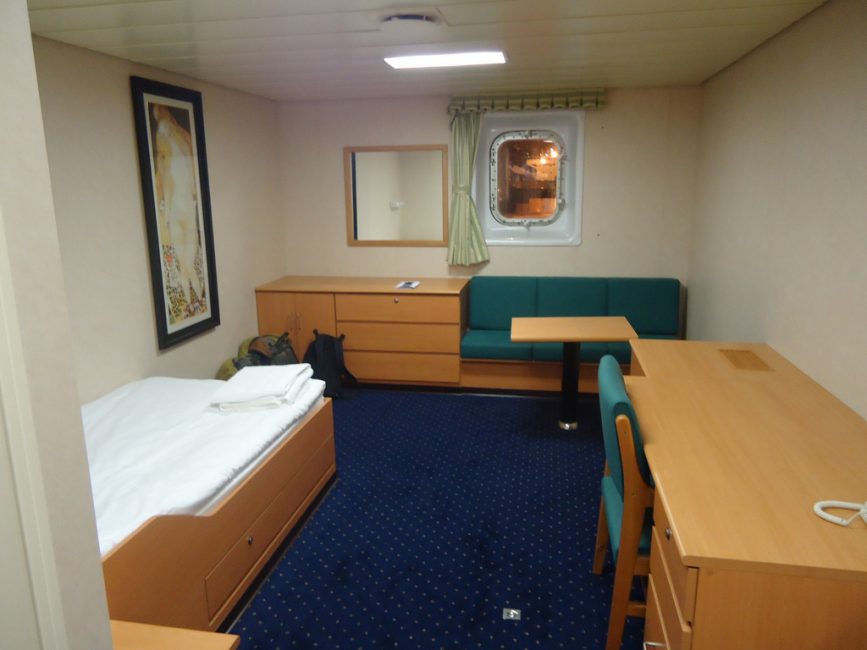 Cabin On Board Cargo Ship

In other respects it was like living in a Soviet submarine. While the crew was mostly Filipino, the officers were all Croatian and Ukrainian and they spent most of the rare periods in which they succumbed to my polite attempts to engage them in conversation reminiscing about the good ol' days under the Communists when the crews were large and the workloads small – plenty of scope for games, music and vodka.

Today, sadly, these cargo ships slide silently through the sea like ghosts. My entire floor, ‘E Deck', was empty. I was the ship's ‘Spare Officer (A)' according to the sign on my door, and fit somewhere in the hierarchical limbo between superfluous officer and steam-pipe mould.

In one telling encounter I'd just finished putting on a wash when I turned and saw the captain standing in the laundry doorway. He looked at me, then at the washing machine.

“Err… do you want to go first?” I asked. He stared at me blankly.

The ship could also be quite spooky at times. The constant movement and vibrations of the vessel at sea seemed almost human. I often got the sense that someone had just sat down next to me or even gotten into bed with me. Objects placed on tables would march slowly but resolutely towards the edge, finally hitting the floor with a bang that invariably ejected me from my skin.

Another concern, only slightly more legitimate, was of pirates. The first mate took me on a guided tour of the rest of the ship one day and pointed out all the anti-piracy apparati: riot hoses, rope ladder axes and even dummy security men equipped with fake rifles. The mate even related some stories of work colleagues who'd been taken hostage in these waters, sometimes for months. 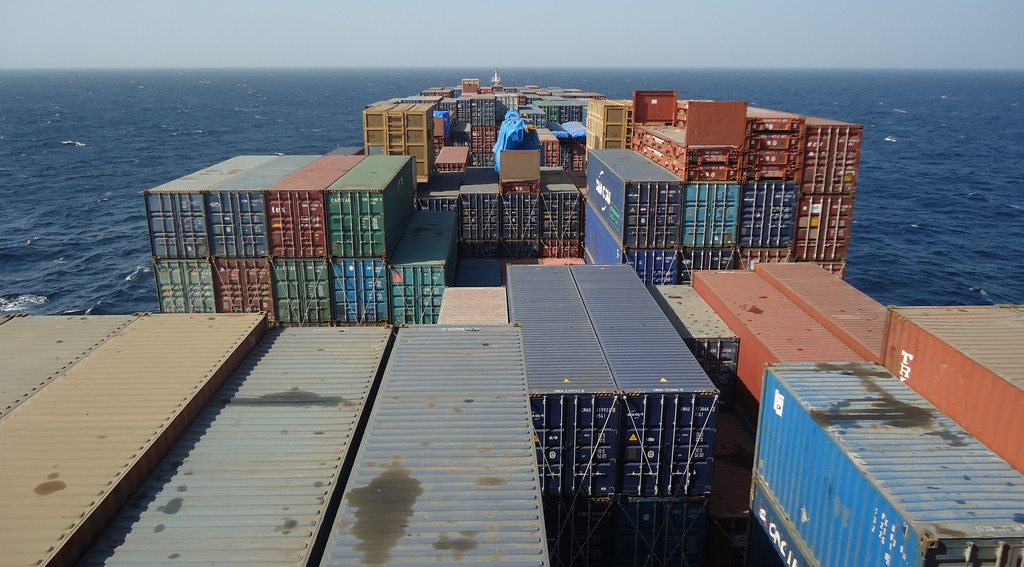 Otherwise I spent my time reading, listening to podcasts, stuffing my face full of the excellent food prepared especially for me and watching movies from the ‘Ship's Library'. They had the rather pointless but somewhat interesting ‘Darjeeling Limited' about a train journey in a fictional country bearing no resemblance to India, and the much more excellent film ‘Chopper', which toyed with my Australian homesickness.

I filled in the gaps gazing at the hypnotic immensity of the ocean – a desert in flux. One night I saw swirling bioluminescent fireworks being churned up in our wake, mirroring the brilliant starfield above. I often watched leaping schools of fish shadowing our slow progress but I never saw the dolphins diving in the waves that the preceding passengers reported.

The Cost of the Voyage

Well, I hear you ask, how much did this crazy sea voyage end up costing me? First, think of the carbon footprint: a back-of-the-envelope calculation puts my personal CO2 contribution at an additional 500 mils of fuel for the whole journey (although that's enough for over 2,000 kilometres of chain cleaning).

For the six days I was on board the trip cost $1200. If I'd chosen instead to fly it would have required one fifth the money and one fiftieth the time. But stuff that. This was totally worth it. 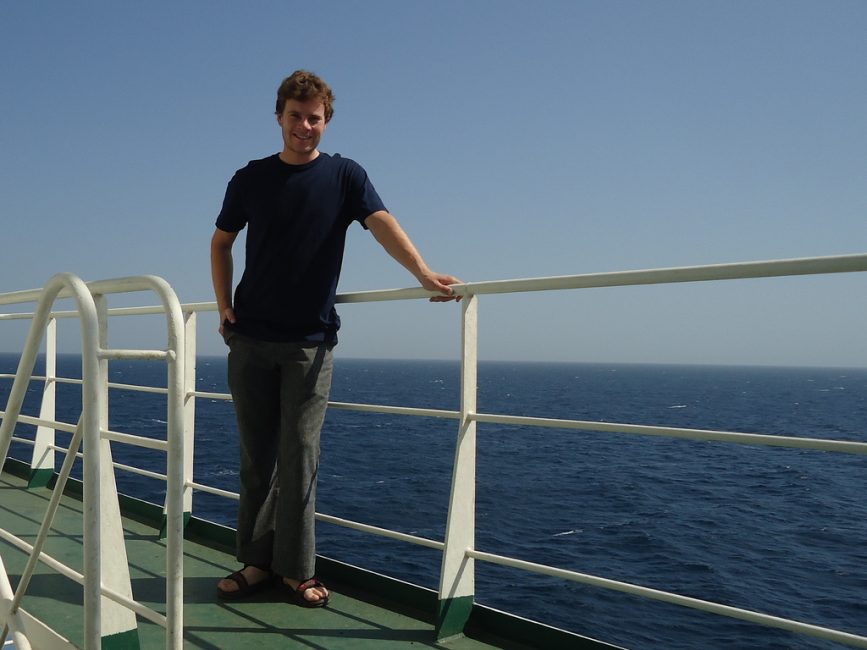 After six days at sea I was at last disembarked at an Omani port half-way up the end of the Arabian Peninsula. It was 4:30 in the morning and I was thirty kilometres out of town. Miraculously, my ailing bike got me into the city.

This was not helped by multiple shells of port security refusing to believe either that passengers could travel on cargo ships or that I could just ride on my bike into the country – but that's fine, by now I'm used to people not believing that what I'm doing is possible.

Shortly after arriving in the delightfully named city of Salalah my bottom bracket actually disintegrated on me, flinging my left crank to the ground and grounding me where I stood.  A new adventure had begun…

I was born in Melbourne, Australia, in 1983 where I also studied Arts and Civil Engineering at University.  After three years working on various freeway construction projects I felt the pull of the rest of the world and so began a 20 month trip around the Indian Ocean.
After backpacking through South East Asia, I began cycle touring in Vietnam, which then continued in Nepal after a mechanical failure forced me back to backpacking during China.
Rounding off my trip I cycled for four months through India and another two across the Arabian Peninsula and Iran.  Finally, I flew to Eastern Africa before returning home to begin a job back near Melbourne as a desalination plant construction engineer.

Cruise to Cozumel – My Day in Paradise

Moorea Island – 6 Reasons this Should be Your Next Luxury Getaway

Cycling through the Countryside in Vang Vieng, Laos