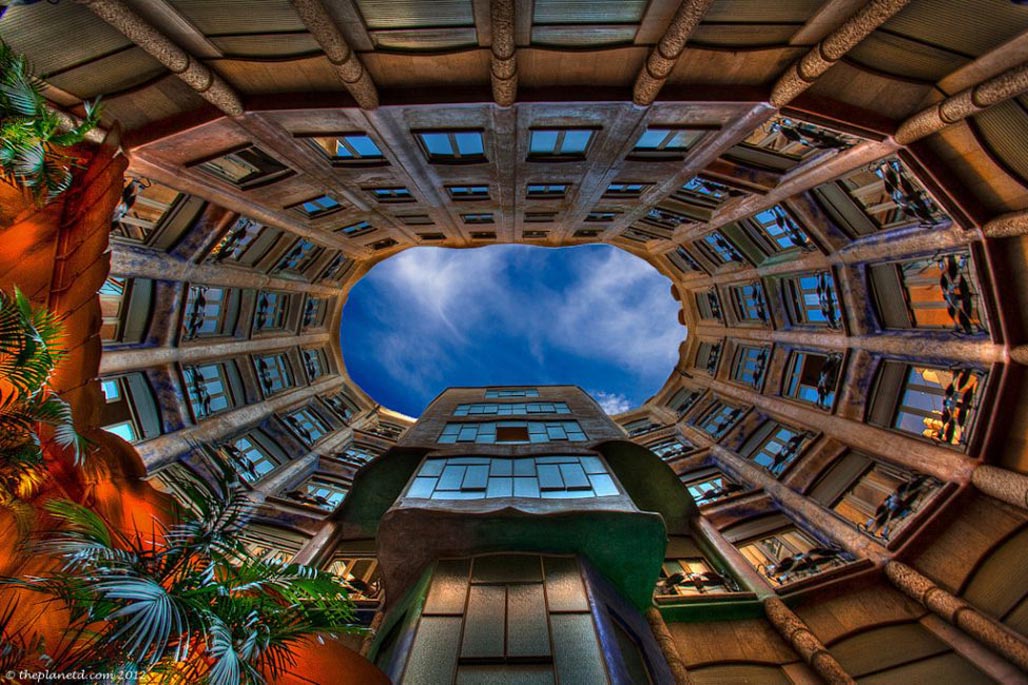 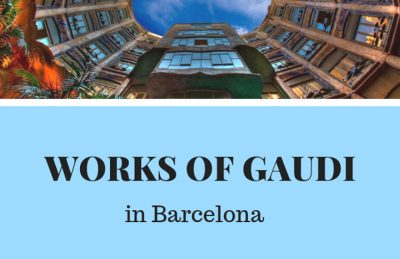 A tour of the works of Gaudi in Barcelona.

Barcelona is one of the most famous cities in Spain to visit and it is the stunning architecture of Antoni Gaudí that has helped to make it a must-stop on any Spain itinerary.

Works of art are on display around the city showcasing the renowned Catalan architect. Gaudí’s Art Nouveau style influenced a generation, and the buildings of Barcelona are some of the most unique you will ever see.

Where to Find Gaudí in Barcelona

Barcelona led the charge of Catalan Modernism or  Modernisme with Gaudí at the forefront.

His designs have become a symbol of Barcelona and seven Gaudi designed buildings have been awarded UNESCO World Heritage status.

The most famous site in all of Barcelona is La Sagrada Família.

Sagrada Família began construction in 1882. Surrounded by cranes and scaffolding, it is a the centerpiece of the city of Barcelona.

It is scheduled to be complete by 2026 to commemorate 100 years since the passing of Antoni Gaudí. He died in 1926 the age of 73 and never had the chance to see the cathedral finished.

The original architect was Francisco de Paula del Villar but after technical differences he stepped aside to make room for Gaudí.

La Sagrada Família started out as a neo-Gothic inspired cathedral, but Gaudí took it in a different direction creating a church of the future.

Gaudí only finished 25% of the building but didn’t regret the fact that he wouldn’t see it complete.

He was aware that he would not see it complete and is quoted as saying:

““There is no reason to regret that I cannot finish the church. I will grow old but others will come after me. What must always be conserved is the spirit of the work, but its life has to depend on the generations it is handed down to and with whom it lives and is incarnated.“

More than 3 million people visit the cathedral each year and the funds it receives from tourists is used to help cover construction costs.

Built in 1909, the curved roofs of the brick buildings give off a distinct Gaudi flare.

Father Gil Parés was named priest of Sagrada Família by the Cardinal Casañas and remained so for 20 years.

By designing the schools, one can see into the nature of Gaudi who clearly cared about his workers.

Casa Mila was our favourite of all the Gaudí buildings to explore.

We marvelled at the oval-shaped courtyard reaching up to the sky upon entrance. Also known as the Stone Quarry (La Pedrera).

Built between 1906 and 1912, La Pedrera was commissioned by Pere Milà and his wife Roser Segimon. Hence how it got its name.

We toured the rooms and made our way to the spectacular rooftop. A visit to Casa Mila wouldn’t complete without seeing it.

The roof offers beautiful views of Barcelona, but it’s the design that is striking. We wove our way through chimney’s, staircases and spires.

I can only imagine the parties that were hosted up here.

You know instantly when you have arrived at a Gaudí work of art by the large crowd milling around out front.

Casa Batlló followed used the elements of Art Nouveau to restore this house located on the street Passeig de Gracia.

This street is a work of art unto itself with several other impressive buildings designed in the Catalan art nouveau genre.

Take a close look at the balconies of Casa Batlló, they look like they are skulls.

We could go broke looking at the works of Gaudí in Barcelona.

But if you are a true fan, entrances are not to be missed. Gaudí was just as inspiring inside as he is out.

You can book an immersive experience with a virtual reality smart guide to Casa Batlló with Get Your Guide. Free cancellation.

Casa Calvet is one of Gaudí’s earliest works in Barcelona.

It’s not the most innovative, but when you see it, you’ll notice the distinct Gaudí flare.

Built in 1899, it is considered his most conservative works and yet, in 1900 Casa Calvet was awarded the prize for the best building of the year by the Barcelona City Council.

Discover Gaudí in Barcelona by bicycle – Discover how Gaudí imagined his designs and the beginnings of Modern Urbanism. Get into hidden courtyards and learn of the Modernisme period in Barcelona.

Casa Vicens is the first house designed by Gaudí. It was built as a summer house for the Vicens family between 1883 and 1885.

A surgeon from Havana, Dr. Antonio Jover bought the home in 1899 and it was passed down through his family until it was purchased by MoraBanc who renovated and restored it to its former glory.

It had been a private residence for more than a century, but

It is also the newest tribute to Gaudí. It’s been newly restored and opened as a museum.

Book a Skip the line Ticket to Casa Vicens. If you are looking for something more in-depth, book this Early Access Guided Gaudí Tour giving you access to Casa Vicens before it opens before continuing on to Park Güell, and Sagrada Familia.

Park Güell is an enchanting garden designed by Gaudí just outside of Barcelona on Carmel Hill.

It was commissioned by “1st Count of Güell,” Eusebi Güell. He wanted the park to be a place of urbanization and development. As the face of Catalan modernism, Gaudí would take this area into the 20th century.

It is a fairytale land with greenery and interesting architectural designs. Gaudí worked on the park from 1900-1912 and it officially opened in 1926. the year of his death.

It became a UNESCO world heritage site in 1984.

As Crazzzy Travel wrote in here Romantic Things to do in Barcelona Post:

“The place not to miss is a terrace with a spectacular view of the city.“

Book a Skip the Line Park Guell Walking Tour – check-in in at the Gaudí Experience office on Larrard Street to meet your guide for a tour of Gaudi’s most important works. (free cancellation)

It can be reached by public transport.

While visiting Park Guell, you can visit the Gaudi House Barcelona.

The former residence of Antoni Gaudí was designed by Francesc Berenguer i Mestre.

Gaudí lived here for 20 years until just a few months before his death. Visitors can see a collection of furniture, objects, and documents from Gaudí’s life gaining insight into his life and work.

Need to Get Around Barcelona – Book your Barcelona Hop on Hop off Bus Tour with 24 or 48 hour options.

Palau Güell (Güell Palace) is another Gaudí work commissioned by Eusebi Güell. This was the private residence of the Güell family. This pre-dated Park Guell as Gaudí began construction in 1886. (finishing in 1890)

From the outside, it doesn’t look that impressive, but when you go inside, and it is the lavish Gaudí design that you would expect.

Working with the usual Catalan Art Nouveau elements of stone, wood, wrought iron, ceramics, and glass Palau Guell is renowned for its innovative use of light and space.

The central hall is crowned by a Parabolic Dome (a dome that looks like the small end of an egg).

Another UNESCO World Heritage Site, Palau Guell was also declared an historical-artistic monument by the Spanish Government in 1969.

Is is located near La Rambla in the Gothic Quarter of Barcelona.

Güell commissioned Gaudí for many works in Barcelona. The Pavellons Güell was the first of many!

Gaudí built the entrance way and pavillons to Guell’s estate. They can be viewed on Barcelona’s Avinguda Pedralbes.

From 1884 to 1887 Gaudí created two guest houses and the wrought-iron gate in the shape of a dragon that connected them. He also spend time relandscaping the gardens.

The water tanks and hydraulics were designed by Gaudi while working for designer Josep Fontserè.

If it looks familiar, you are correct. This fountain was modeled after the Trevi Fountain in Rome.

Plaça Reial is a popular meeting spot for walking tours. Chances are, if you are in Barcelona, you will make your way to Placa Reial at one point.

The Porticoed Square (covered porches and walkways on buildings) is one fo the city’s most vibrant spots!

While in the square be sure to look for the street lamps on either side designed by Gaudí in 1879.. You’ll recognize them by spying the winged helmet and a dragon on top.

Colonia Güell is located 23km southwest of Barcelona in the village of Santa Coloma de Cervelló at Guell’s country estate.

It is another of Gaudí’s unfinished works. Construction began in 1908 but construction was stopped in 1914.

The only portion that was completed was the Crypt which was designated a UNESCO World Heritage Site in 2005.

You don’t have to be a fan of Gaudí architecture to enjoy Barcelona. The streets are alive with energy, the tapa bars are filled with great food and wine, and the rest of the architecture is extraordinary. But you will find that his works add to the entire experience.

The works of Gaudí put Barcelona’s design on the map and it is his innovative and imaginative designs that keep people flocking to the city to catch a glimpse of perfection. 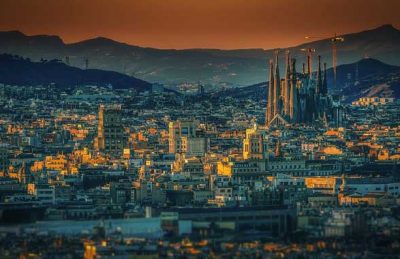 10 Fun Things to do in Barcelona at Night 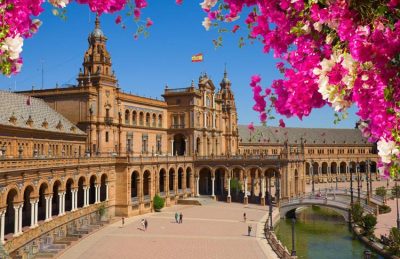 15 Free Things to do in Seville, Spain 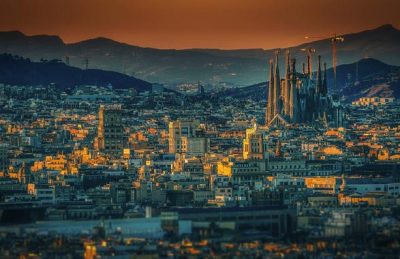 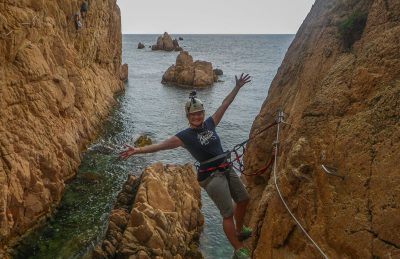 Via Ferrata, Spain – Take your adventure to New Heights