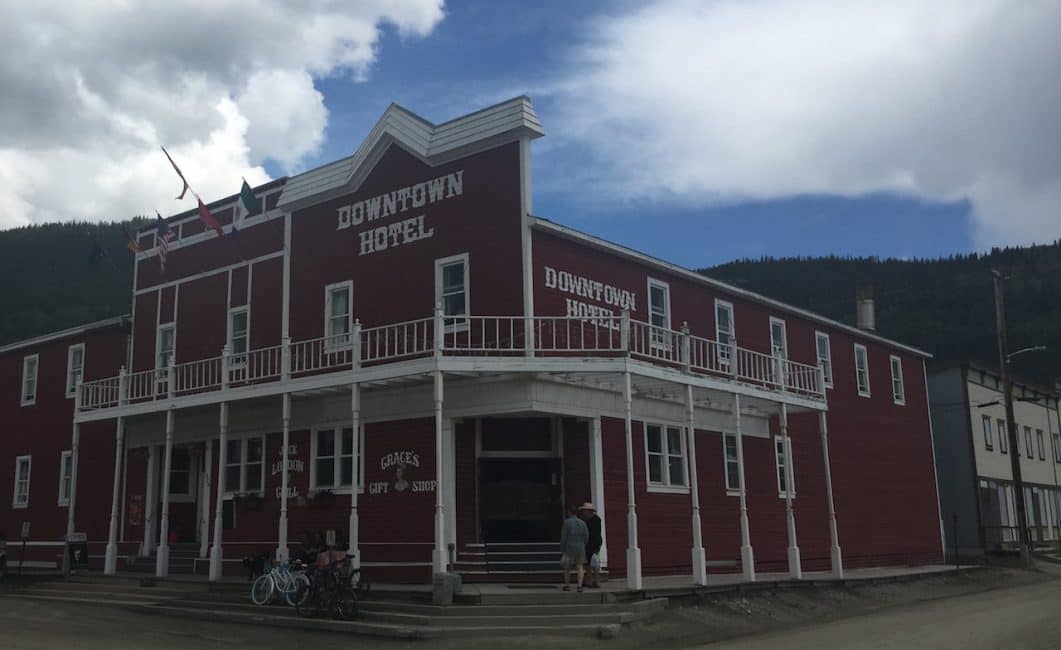 The sourtoe cocktail is a drink invented in Dawson City Yukon where patrons order a shot of alcohol with a dead human toe added for taste.

Our latest adventure in the Yukon took us an old saloon in Dawson City where we had the pleasure of touching someone's dirty, dark, and dead toe to our lips while enjoying the one of a kind Sour Toe Cocktail.

You know how travel always gives you a reason to do something different and step a little bit out of your comfort zone?

Well, when we visited Dawson City in the Yukon, we did just that.

Dawson City's Sourtoe Cocktail has become a classic tradition where brave travellers stop by the Downtown Hotel to become a member of the Sour Toe Cocktail Club.

How does one do so? They order a shot of premium spirits, drop a nasty dead toe into it and consume the alcohol.

The Rules of drinking the Sourtoe Cocktail are:

You sit down with the Captain who is sitting in front of a plate of salt with the withered dead toed on display.

She takes your name and address, and if you do consume the cocktail, you receive the certificate to prove it. There are just a few rules.

“Drink it Fast
Drink it Slow
but your
Lips have gotta touch the toe!”

No swallowing the toe either.

Fine for Swallowing the Dead Toe

I know it's hard to believe that someone would actually want to swallow a dead toe, but it has been swallowed in the past and dead toes are hard to come by!

We thought it would be a hoot to try the Sour Toe Cocktail, but I must admit, when the time came, we weren't sure we could go through with it.

When we arrived at the bar the first time, there was a line up out the door filled with people waiting to face the dark dead toe.

We decided to come back later.

There is only a short window to drink the Sour Toe Cocktail. The Captain is only open from 9-11 pm. And everybody who's anybody wants to drink that cocktail.

Besides, for Yukon standards, 11 pm in the summer is quite early.

Everyone in Dawson City is out until the wee hours of the morning taking advantage of the midnight sun.

Dawson City is way up north in the Yukon Territory and it enjoys nearly 24 hours of sunlight during the summer season.

It's not unlikely that you'll end up joining the party with one of the friendly locals at one of the many bars.

We made it into the Downtown Hotel in at the nick of time at 10:45, ordering two shots of Klondike Vodka complete with flecks of Gold to celebrate the city's Gold Rush days.

You want your alcohol strong for this cocktail.

The more disinfected the toe, the better.

We had heard that the other male captain is quite the showman, but we had the pleasure of a female captain during our Sour Toe attempt.

She didn't put on much of a display as we were expecting and sadly, went through the motions of quickly telling us the rules.

We were hoping for more theatrics, but it was fun all the same.

Besides, enjoying a drink with a dead toe in it was quite entertaining enough.

I went first and drank my vodka quickly, but the toe seemed to get stuck in the bottom of the glass.

It doesn't count if the toe doesn't touch your lips, so I wiggled my cocktail around a bit until it fell and finally touched my lips.

Eww. The vodka was strong and I was grateful for that. I didn't like the sensation of someone's toe brushing my lips at all.

Dave had a better time learning from my mistakes.

He gave his glass a quick swirl, said the mantra and took a swig.

The toe fell in one swift movement and before we knew it, the show was over.

We both had success and we are now proud members of the illustrious Sour Toe Cocktail Club.

We even got the certificate to prove it.

Before we knew it, our experience was over.

Cost of the Sourtoe Cocktail

With our pockets $30 lighter – ($6 each for the vodka, $5 each for the privilege of having a drink with the toe in it, and $5 tip for the Captain) we felt proud of our accomplishment for the day.

Yes, it's gross, and no, it's not something we'd do again.

But when in Dawson City, Yukon, you must join the club and drink the Sour Toe Cocktail.

The History of the Sour Toe Cocktail

How on earth did this tradition start you ask?

It was back in the 1920s during the moonshine days when rum-runner brothers Louie and Otto Linken ran into a blizzard during one of their deliveries.

His brother graciously amputated his toe with an ax and they preserved his toe in a jar of alcohol.

The original Captain, Dick Stevenson, found the toe in a cabin and came up with the idea to serve it in a bar in downtown Dawson City.

Only in the Yukon would someone get the idea to take a pickled dead toe and put it in a cocktail.

Well, the gig paid off and the Sourtoe Cocktail has been going strong ever since.

Several Toes Over the Years

The toe didn't last forever though, there have been nearly a dozen toes donated to the Sourtoe Cocktail over the years for people to enjoy touching their lips.

Our Captain told us that our toe was a very new one left anonymously for all to enjoy.

To whoever is short a toe out there, thank you for your kind donation.

The Sour Toe cocktail will live on to see another day.

Enjoy this post on the Sourtoe Cocktail? Save it to Pinterst for future enjoyment.

Would you Eat Whale?

The Dempster Highway – Yes you can drive to the Arctic