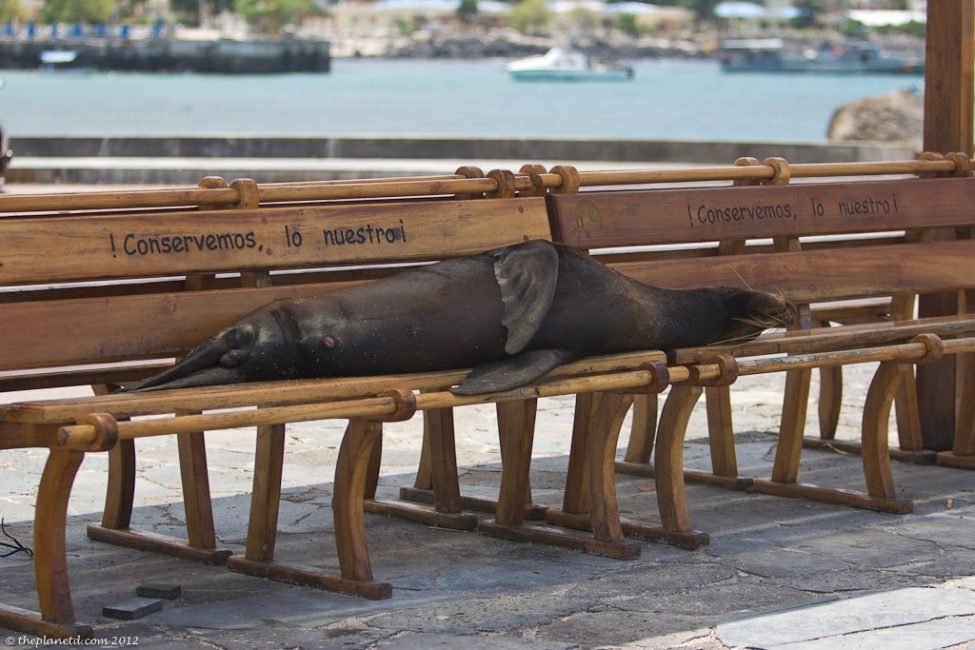 One thing you are sure to see when traveling to the Galapagos Islands are Sea Lions. They are everywhere. They sleep on park benches, they lay in the shade under trees and they waddle through the streets. Really, they own the joint!

Sea Lions Playing in the Galagos

Sea Lions have the cutest faces and you just want to run up to them and cuddle up.

There are strict rules in the Galapagos to stay at least 3 meters away from sea lions.

I know that you want to get that perfect photograph, but remember, as cute as they are, they are wild animals and if you get too close you cause them to become distressed and they will reach out and nip at you.

Our guide Sambo told us to dive and spin in the water to inspire the sea lions to play with us.

We were told not to reach out and touch them, but we were allowed to let them approach us to have a closer look.

They nipped at our cameras and came as close as they could without actually touching.

It was a moment to remember and instead of gushing and writing way too many adjectives to describe the moment, we’d like to share some underwater footage of our time playing with Sea Lions in the Galapagos.

They are skilled hunters and have sharp teeth, so you don’t want to put that theory to the test.

We had to opportunity to interact with sea lions on several occasions while in the Galapagos Islands. Not only were they hanging out on the main street of San Cristobal, they relaxed on the beach and swam in the water.

We had them follow us during our kayaking adventure when we paddled in San Isabella’s harbour and most of all, we got to play with them while snorkelling in this pristine paradise.

However, the funniest moment came when we were strolling on Santa Cruz and the fishermen had just come in to sell their catch.

These sea lions know them well and tried their hardest to get their fish.

Clearly the fishermen weren’t sticking to the rules of staying 3 meters away. Something tells me, these sea lions come in every day.

He was kind enough to give them some fish. I dont’ think I’d be able to resist either. They are so cute!

We also had the chance to swim with sea lions.

We weren’t expecting it, but during one of our snorkeling excursions, a group came over to say hello! I cannot describe what a joyous feeling it is to have a group of sea lions approach you by their own free will.

We had only been in the water for a few minutes when some curious cuties floated up to us to see what was going on.

Read more Galapagos at Wanna Know What It’s like on an Active Galapagos Tour? or Marine Iguanas Feeding Underwater