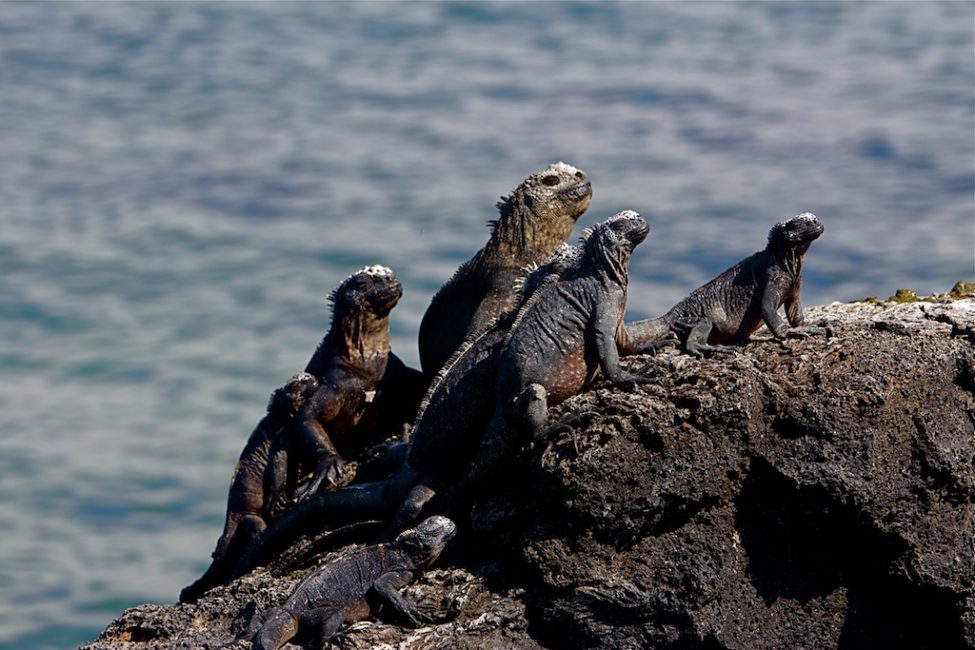 Before we left for the Galapagos Islands in Ecuador, everyone told us that we'd be sick of seeing iguanas. I was prepared to see millions of iguanas and after a day or two I would look at them with a tired yawn and a ho-hum.

But that was not the case.

The Galapagos Iguanas are some of the most fascinating creatures we have ever encountered.

First of all, I was expecting a green or turqouise “gecko-like” creature that scampered around the grounds of our hotel or walked along the streets. As you can see, I did no research before boarding our plane to Quito. 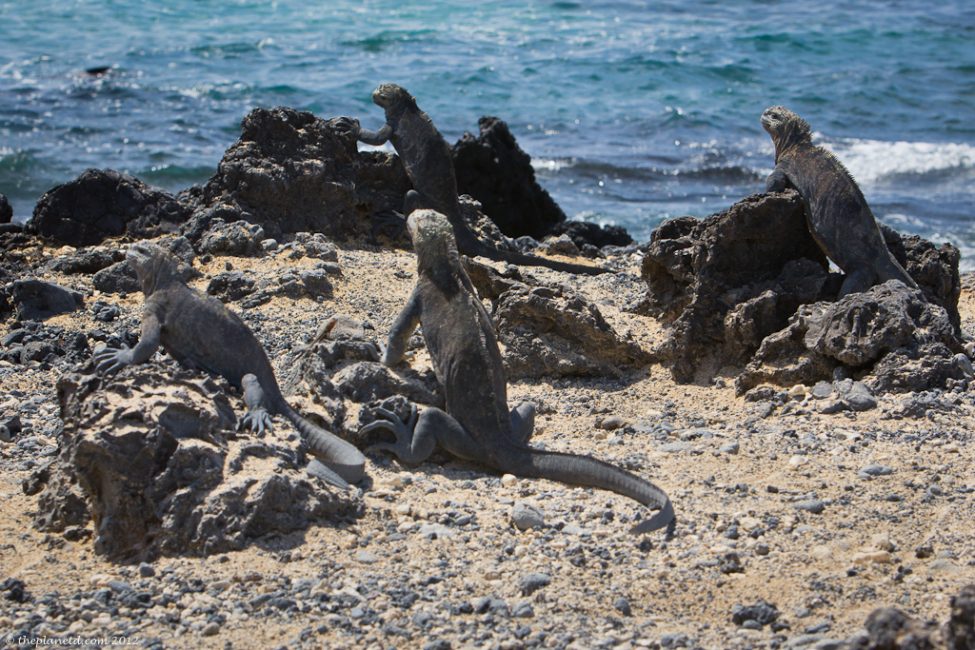 Packs of Marne Iguanas in Galapagos

Instead we viewed these giant black lizards basking in the sun atop hot lava rocks looking Oh So regal and poised as if they could conquer any intruder that crossed their path.

We learned a great deal from our guide Sambo and I want to share with you a few of the interesting facts that we picked up about the Galapagos marine iguana during our time in the world's most unique eco-system.

The Galapagos Iguana is the only iguana in the world that feeds underwater.

Marine Iguanas are amazing in the fact that they can hold their breath for up to half an hour and dive to 30 meters. Check out this incredible footage of iguanas eating under water.

Thanks to our Intrepid Travel guides Tim and Sambo for helping us get additional footage to our iguana videos.

The Galapagos islands are a chain of islands created by volcanic activity. No animals are native to the Galapagos. Every species of animal came to the Galapagos floating on ocean and air currents and they ended up creating a very unique living environment. Over the years the Galapagos Iguana adapted and became the only iguana in the world that feeds underwater.

Marine Iguanas Basking in the Sun in Packs

Contrary to how they look, iguanas are not social reptiles. They actually only hang in packs to keep each other warm. Throughout the day, iguanas face the sun absorbing as much of its warm rays as possible. They absorb all the suns rays and store it up for when the sun goes down. Once night falls, they all sleep together in burrows, huddling together to keep each other warm.

Galapagos Iguanas Have a White Wig 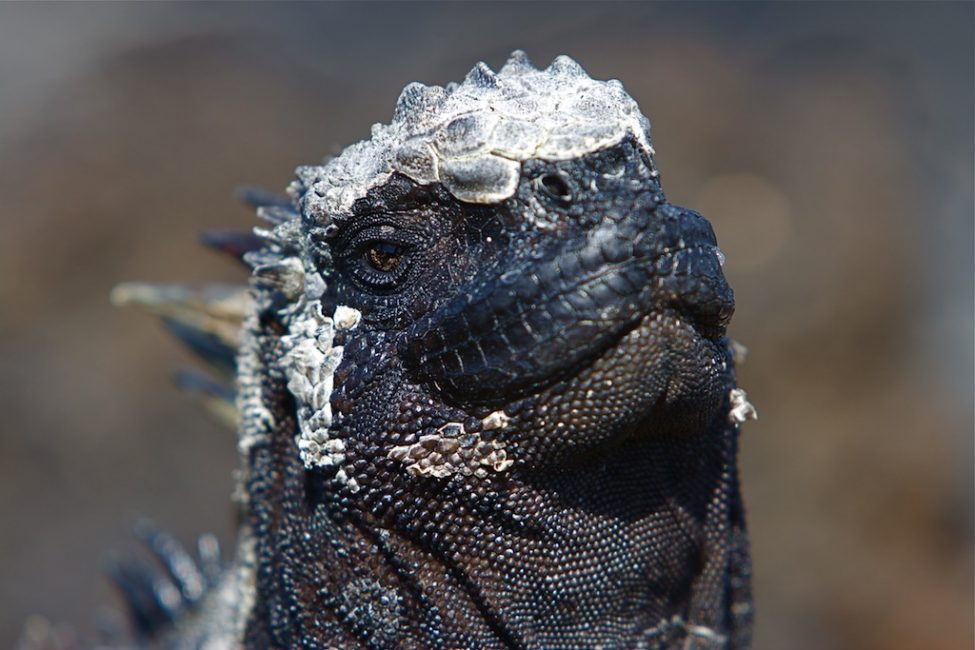 White Head of the Iguana Caused by Salt Water

Since the Galapagos Iguanas swim and eat in salt water they ingest a lot of salt. Because of this, they sneeze a lot and when they do so, salt sprays onto their heads giving them a white noggin that almost looks like an old fashioned white wig that men wore during the Baroque Period of the 1700's. I like it! 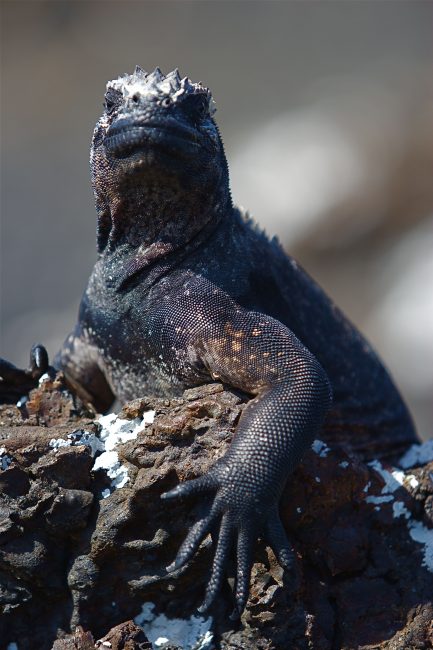 Standing Tall on a high Rock

When an iguanas territory is being threatened, they position themselves on a high rock, stand up straight on their legs and look down upon their enemy. Because they blend so easily with the volcanic rocks around them, they appear much larger than they really are scaring the intruder off and causing it to turn away. 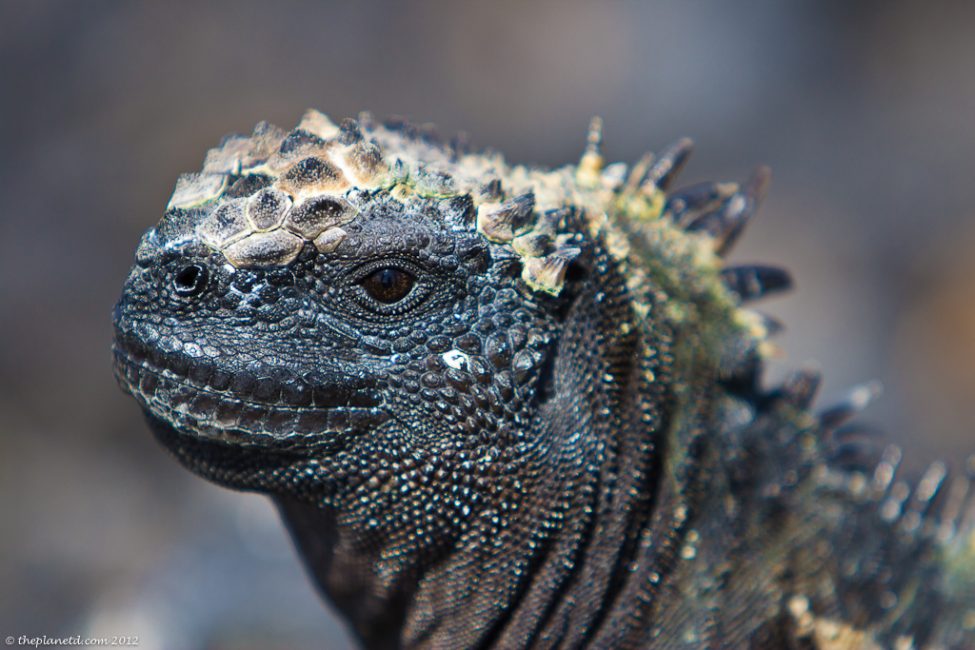 Just look at that face! Charles Darwin may have said that they are hideous looking and most disgusting, but I found them to be adorable. These Galapagos Iguanas reminded my of our family pet, Kerry. I had a poodle growing up that had scraggly hair and bald ears and some people thought he was really ugly. I thought he was the cutest little thing. Some things end up being so odd looking that they become cute. That is what feel the Galapagos Iguana is. Strange to the point of cute. Charles Darwin may have been the brainchild of the theory of evolution, but he certainly didn't have any clue about the iguanas. He looked at the iguanas as he did the turtles of the Galapagos…nothing more than a source of food.
Sadly both the Galapagos turtle and iguanas were hunted nearly to the point of extinction. Today however it is a national park and world heritage site protecting the endemic wildlife of this remarkable destination.