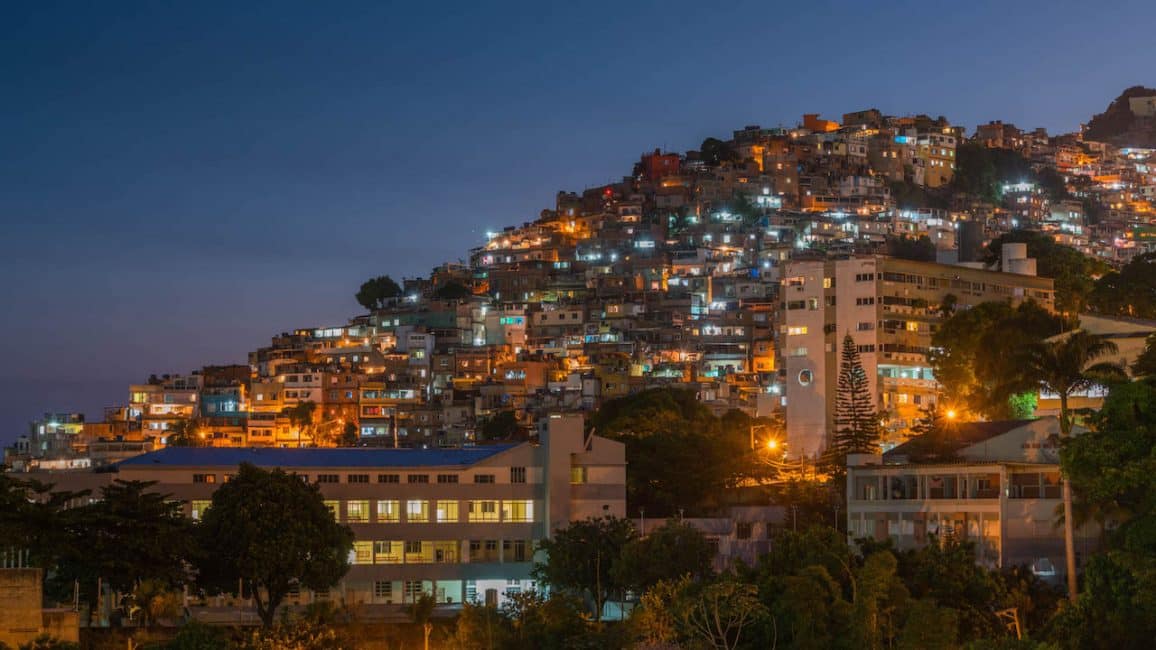 I first became interested in visiting Rio favelas when Dave was working on The Hulk in 2007. Some of the cast and crew flew down to Rio to film the opening scene where Edward Norton was chased through the slums of the city.

When watching the colourful community built on the side of a steep hill displayed on the big screen TV, I was intrigued to find out more. However, Dave and I have never been ones for slum tourism.

We spent three months in India and never visited a slum.

We’ve travelled to South Africa twice and refused to gawk at people living in the poor shanty towns.

So why are Rio’s favelas different? The answer is they aren’t. 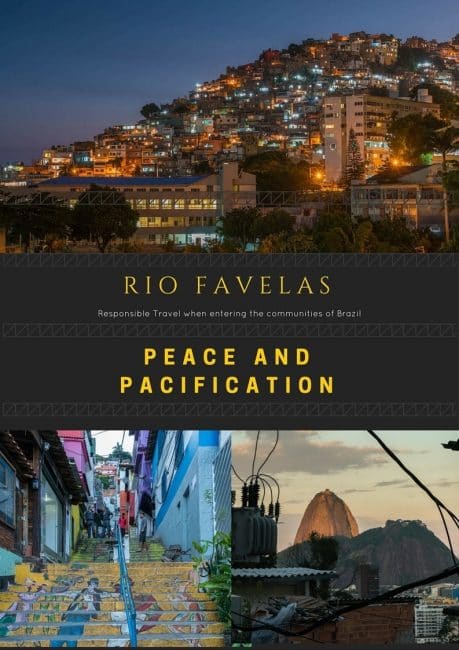 It’s more of our mindset and changing society.

Over the years, we have learned that when booked responsibly and carefully, tourism into poorer communities of a city can help the population. But it must be done properly.

For a first-hand perspective, Read Should you Feel bad about visiting Rio’s favelas?

When our friend Jason (owner and operator) of Toronto’s Tour Guys suggested we get in touch with his friend Luiz of Rio’s Urban Adventures, we knew this was the way we wanted to explore the city’s favelas.

Luiz is from Rio and he knows the people of the Santa Marta Favela.

As we walked through the narrow alleyways of the community with him, people constantly stopped Luiz to say hello and chat.

He is friends with these people and they happily welcome him bringing tourists into their community to learn and better understand their way of life. 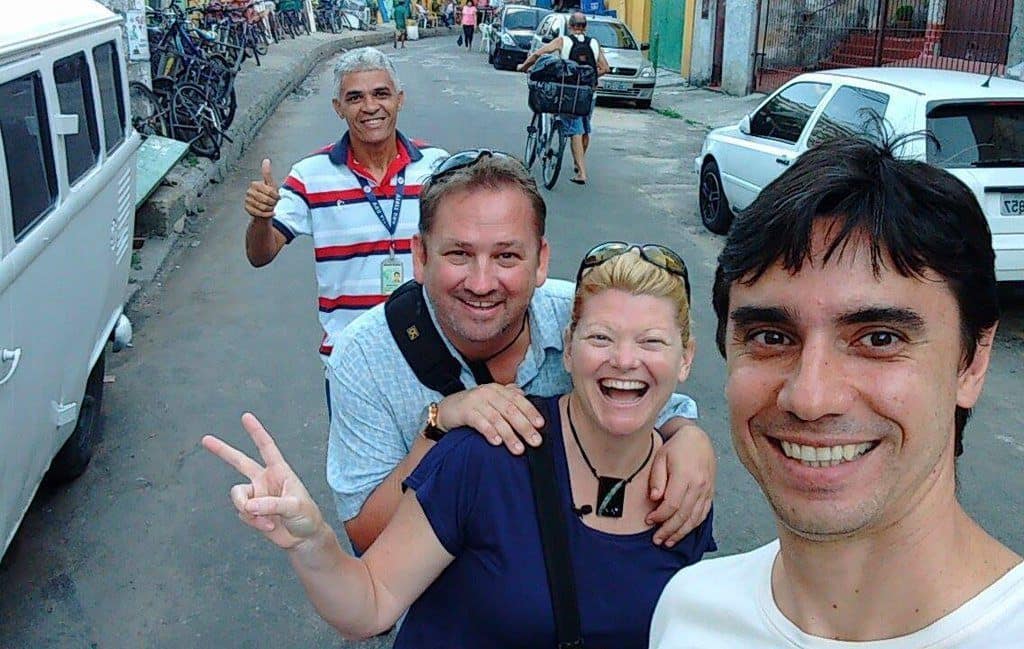 Our awesome Guides in the Favelas.

What are Rio’s Favelas

To truly better understand life in Rio’s favelas, you need to walk through the community and engage with the locals.

A favela is a term for a shantytown or slum in Brazil. More than 1.5 million people live in one of the nearly 800 favelas of Rio.

That’s one-sixth of the population and chances are that your bartender, housekeeping staff or even front of desk reception of your hotel could be living in one of the many favelas of Rio. 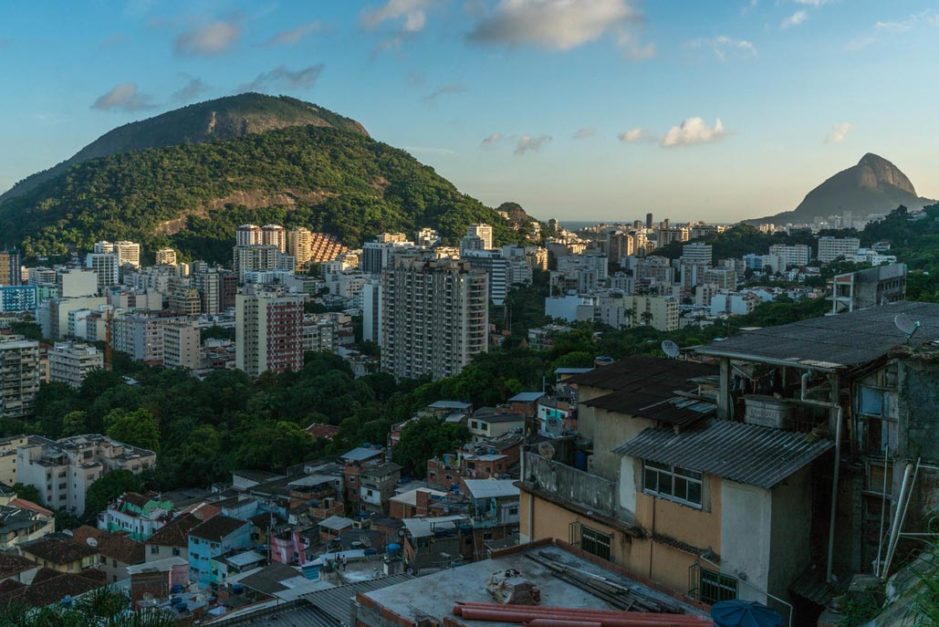 The view from the Santa Marta Favelas

Brazil is changing. As host of the  2014 World Cup and the 2016 summer Olympics, authorities have worked hard to change the perception of lawless and dangerous Rio.

Favelas have the reputation of being run by gangsters and drug lords. In the past, they were dangerous and off-limits to outsiders.

Today, nearly forty favelas have been pacified by police units.

There’s a long way to go, but it’s a start. Most people living in favelas are not a part of the drug trade and live normal lives.

While visiting Rio, we had more than one person tell us that Favela is a derogatory term and the word favela is quickly being replaced by the community.

After visiting the Santa Marta favela, I understand why they want the term changed.

Favela is associated with violence, gangs, and shootouts. The community we walked through had children playing in the streets, parents bringing home their groceries and community centres filled with kids learning to dance. 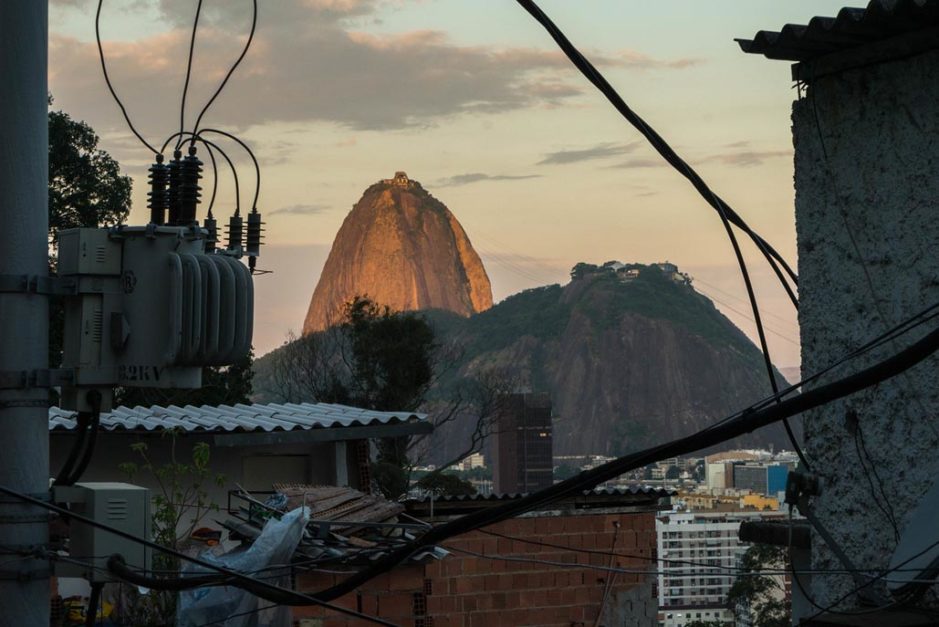 The question Dave and I got most while visiting Rio was “Do you feel safe?” While Rio is still a city filled with corruption, and like any populated urban centres in the world there are certain risks, we did feel safe.

We walked through the streets at night, took morning strolls on the beach and enjoyed our time in Rio.

We didn’t go down any dark alleyways and we didn’t walk down by the water in the dark, but by keeping our wits about us as we would at home, we had a safe and enjoyable time in Rio. 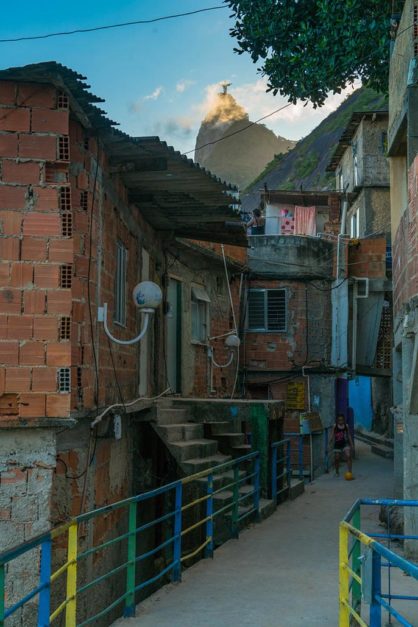 Christ the Redeemer looks over the Favelas of Rio

It’s safe to visit one of the pacified favelas located within the centre of town near the beaches, Christ the Redeemer, and in the suburbs near Olympic sites.

It’s important to know what favela to visit and that is why we recommend a tour.

When visiting the Santa Marta favela, Luiz told us that we are now probably the safest we will ever be in Rio. We don’t have to worry about theft or violence. 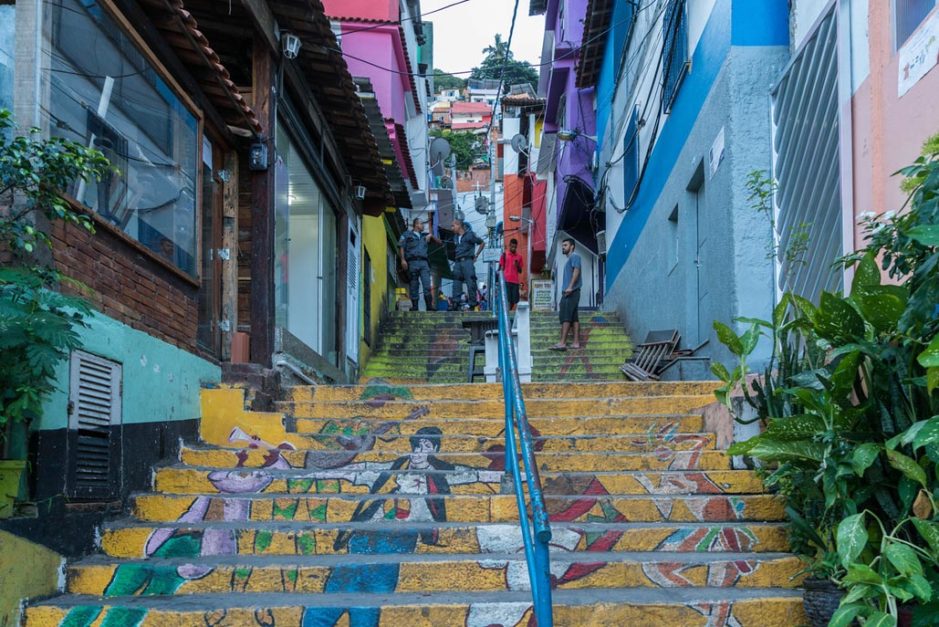 Entrance to the Santa Marta Favelas

The Santa Marta Favela is probably one of the most famous favelas in Rio. Michael Jackson filmed on location here when he shot his video “The Don’t Care About Us.”

When making our way to the top of the favela, we came upon a square with a statue dedicated to Michael Jackson and a shop that played his video for us.

The community has changed a lot since the 1990s.

While watching the video, Luiz pointed out how the wooden shacks on stilts and broken streets have now been replaced with painted cement houses and proper walking paths. 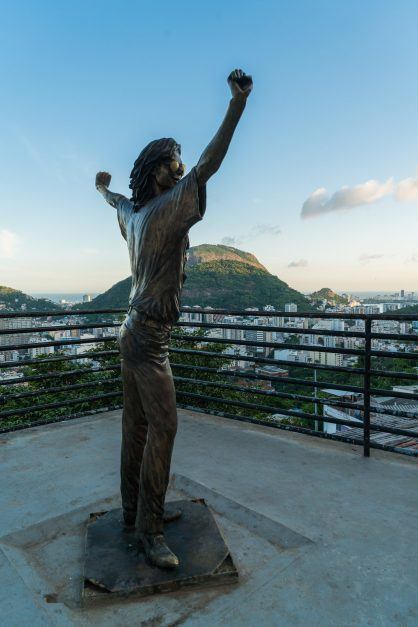 The Santa Marta Favela has grown to a thriving community complete with shops, businesses, proper hydro and garbage collection. 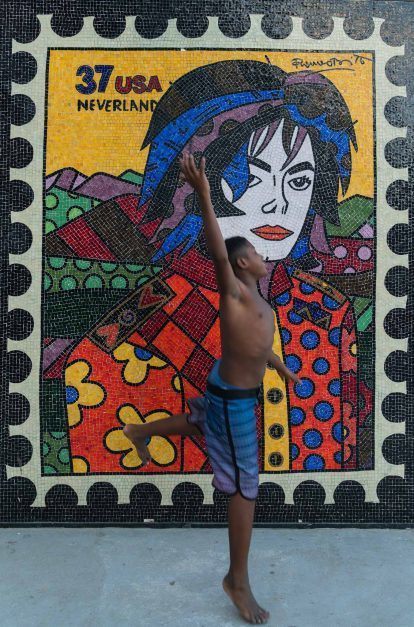 A vital part of the Santa Marta infrastructure is the funicular that takes residents, construction materials, heavy items, and trash up and down the steep hill. 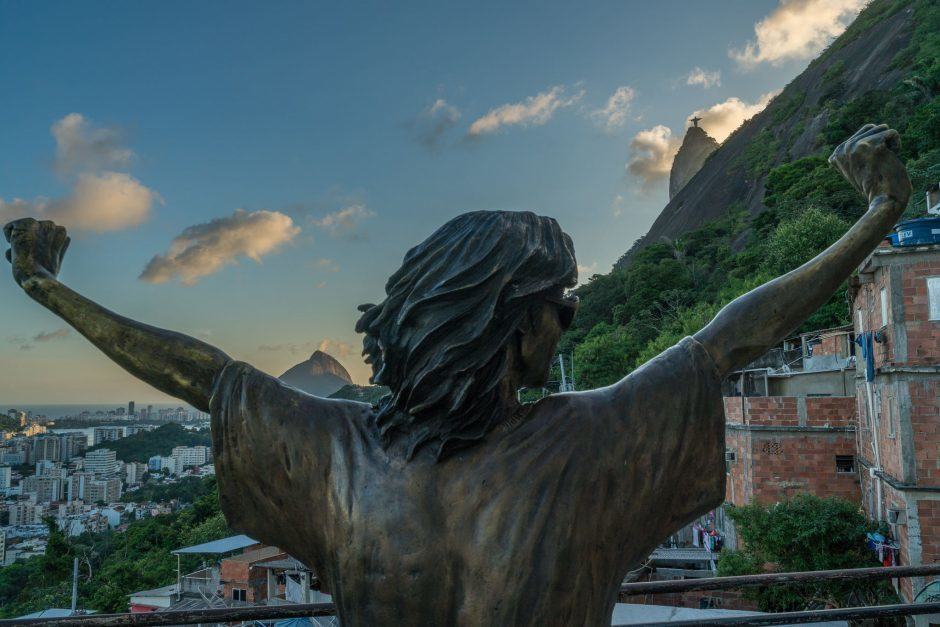 Want to learn more about life in Favelas after pacification? Read about Brazil’s Makeover of Rio’s slums in the Smithonian.

Why are Favelas on Hills?

Rio is a mountainous city. At the turn of the century, it was difficult to get around on high ground. I am often reminded of Hong Kong.

The slums of that city were once on the steep hill that is now the ultra chic and expensive area of SoHo.

The Rio favelas are similar. They started out as temporary dwellings for former soldiers who settled on a hill that was filled with plants known as favelas.

The soldiers ended up calling it Favela Hill. Later, when slavery was abolished in Brazil, many slaves didn’t have a place to live, so they built shacks on the sides of hills outside the city centre.

Over the years, as more people moved from Rural Brazil to cities like Rio, the poor settled in the favelas as well. 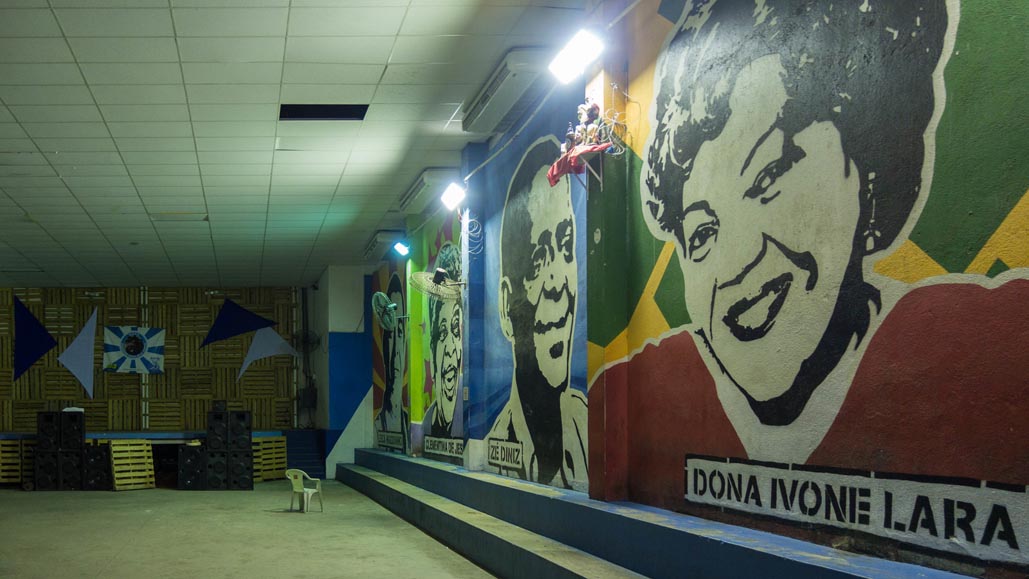 Today, many of the favelas are located in the most prime real estate plots of land. Million dollar homes can be surrounded by the slums.

While staying at the Sheraton Rio on Leblon Beach, we looked directly into a large favela built directly on the sea with the most extraordinary view in the city.

Many of the favelas have the best views. I mentioned to Dave that as the city grows, I am sure that the residents will be pushed out to make room for more luxurious real estate.

A Favela comes alive at night in Rio de Janeiro. ……….. A time lapse through sunset over one of the Favelas in Rio. …………. #rio #brasil #myrio @travelsmith_outfitters

Like many poor areas around the world, drugs took over and favelas were overrun with drug lords governing the favelas in exchange for protection.

With the pacification process of heavily armed police clearing out the violence, favelas have become more of a part of the community.

Favela located on the sea

However, even as I write this, I am not sure how I feel about the term pacification.

Are the authorities simply doing a blanket culling of people? When I listen to filmmaker Dan Jackson speak of his documentary “In the Shadow of the Hill” I worry.

While favelas are becoming safer for tourism, at what cost are its citizens paying? In his documentary, he states that police are disappearing more people than they kill so that it doesn’t affect the statistics of police killing in Rio. 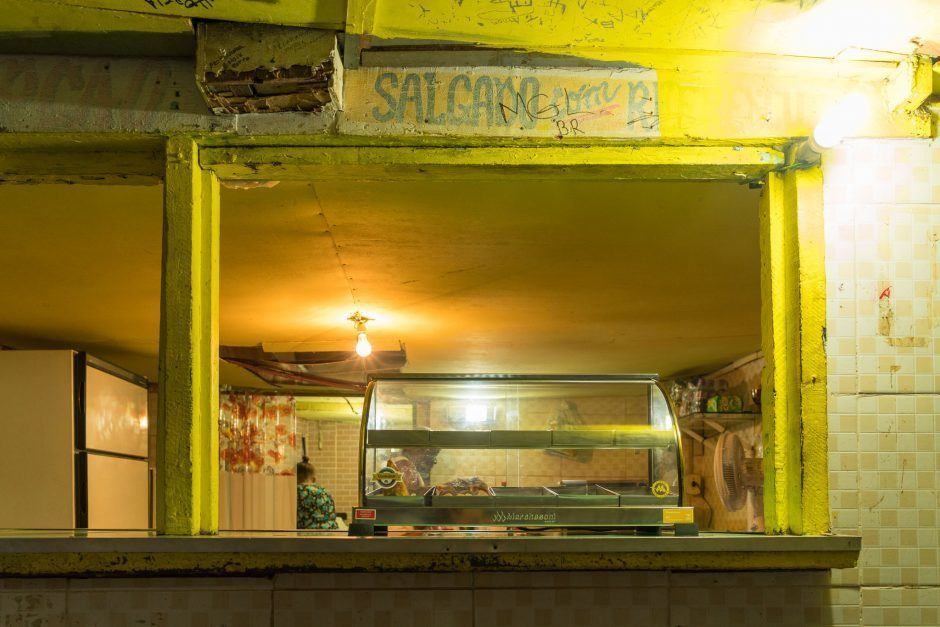 That’s something to be alarmed about, isn’t it? 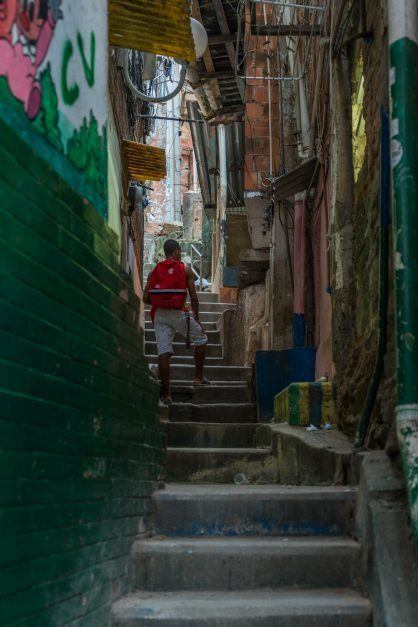 I am not a political commentator so I don’t want to go into further scrutiny, but it is a question to be asked. 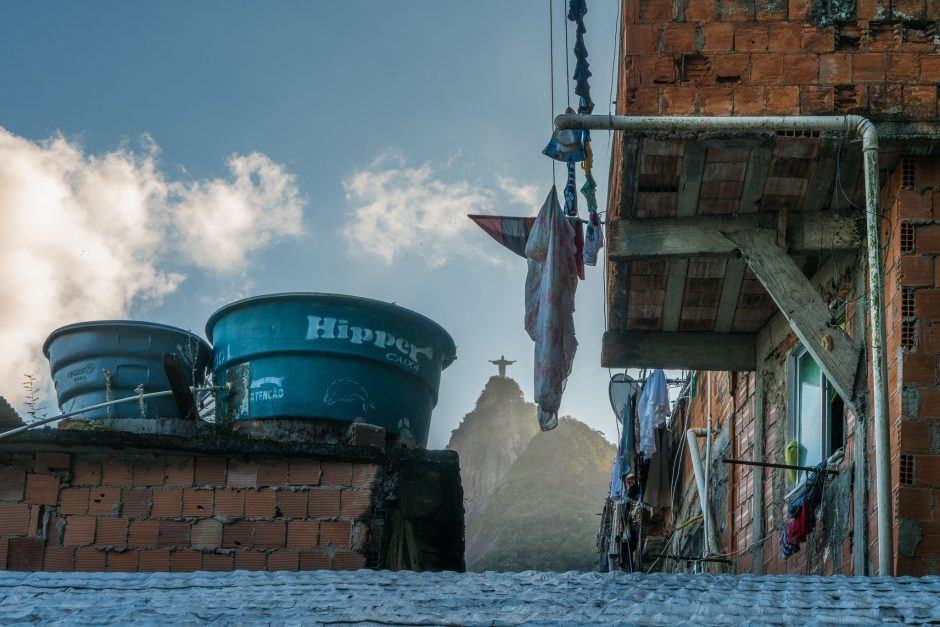 While visiting the Santa Marta Favela, we did feel safe but we still felt uneasy. At one point I was shooting video of colourful houses when a gang of kids yelled something at me. 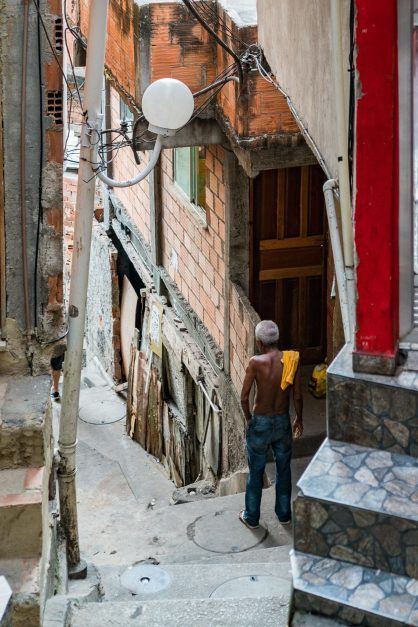 My local guide looked at my camera and Luiz told me I would have to delete the last clip I took. I had no idea what I just filmed. I wasn’t even looking at the kids standing on the platform to the right.

Crime and Corruption in Rio Favelas

I was shooting a block of houses that had recently been painted. But there is still crime and corruption happening.

Some people will say that you are fine to visit a favela on your own.

While the seasoned traveller might feel safe, I think it is with respect that you go with a guide who knows what is on and off limits.

A guide will give you the history of the place and tell you about the progress. We appreciated how Luiz was honest and talked to us about the problems and progress. 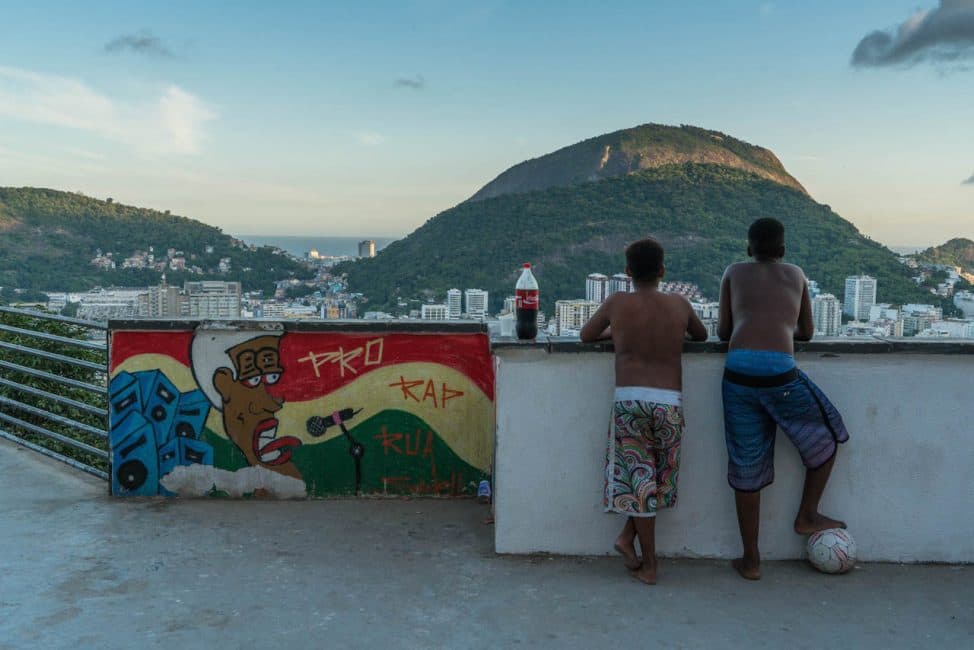 Kids Play in the Favela

He pointed out how one building used to be the drug lord’s head office, yet today it is a kids community.

He played football with two boys who seemed happy and well-adjusted, yet he told us that their father was a drug lord who was killed in 2008 by police. It was an eye-opener and heartbreaking story. 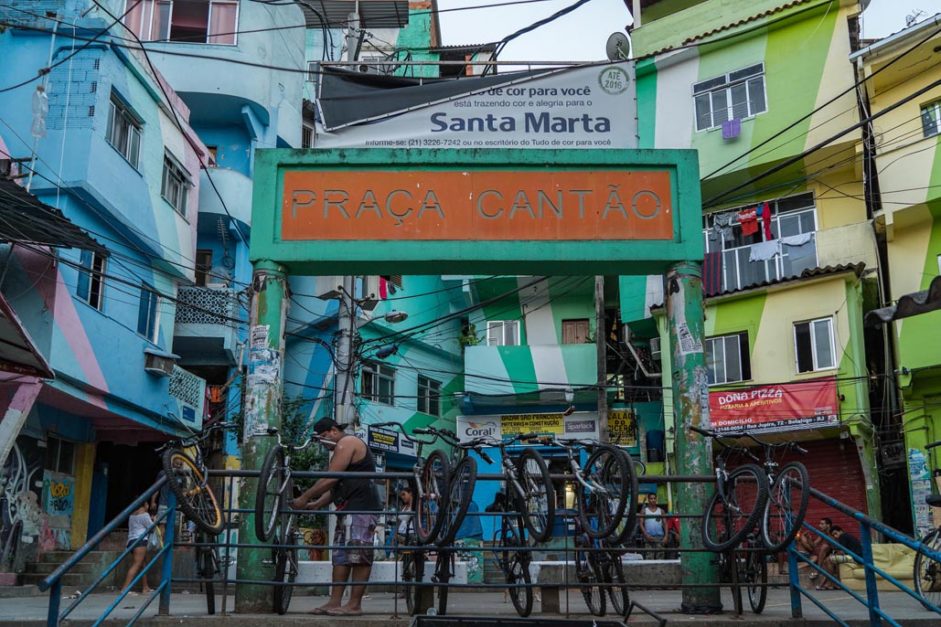 The people of Rio’s favelas are victims of poverty, violence and corruption.

As one article I read stated, “favela residents are caught between drug traffickers on one side and corrupt politicians and security forces on the other.”

But life is looking better and I can only hope that it continues to improve and that Brazil stays on track to remaining part of the BRIC (Brazil, Russia, India, China) countries set to lead in the 21st century.

Brazil is going through political turmoil at the moment. Let’s hope that the outcome is a good one. All eyes will be on Rio this summer, I can’t wait to see them thrive. 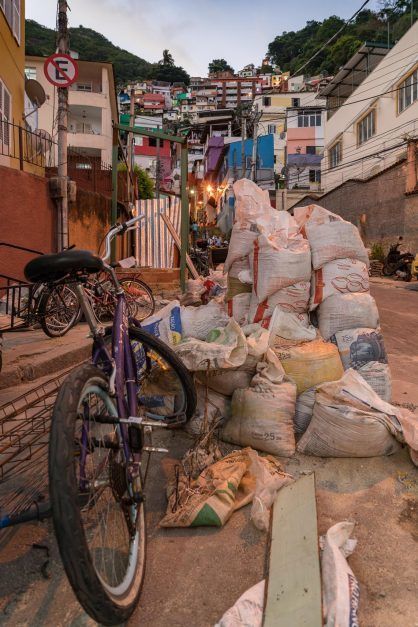 Responsible tips for your favela tour

18 Most Excellent Things to do in Rio de Janeiro