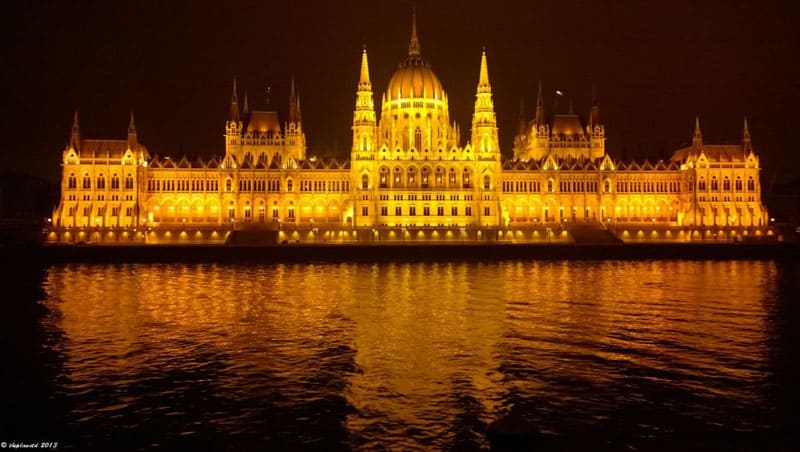 Recently we were invited to join Viking River Cruises on their Christmas Markets Cruise down the Danube. European River Cruises seem to be all the rage these days and we wanted to see what all the fuss was about.

I must admit, Dave and I are not expert cruisers. We've been on a cruise to Alaska, Antarctica and then the Arctic on an expedition but not a proper sightseeing cruise.

Needless to say, we clearly didn't understand how a cruise worked before our Viking River Cruise.

We made a lot of mistakes on our European River Cruise, but if we were smarter, we could have enjoyed it more.

For some reason, we decided to turn off our brain and follow the pack when we got on the ship. This is not required.

They don't demand that you take the tours or follow along. As a matter of fact, these tours are a courtesy.

Tours are included in the price of the cruise and you don't have to go on them at all. They are just something that Viking River Cruises offer to make the experience more enjoyable for their passengers.

You are free to do what you want when you get to port. But we felt that we were supposed to follow the group and do what we were told.

Instead of taking charge of our own itinerary, we let someone else guide us along and we grew more frustrated with each day.

We learned from our mistakes, and near the end of our trip, we realized that we were the problem – Not the cruise itself.

A river cruise down the Danube is an amazing way to see many of the iconic cities of Europe like Vienna, Salzburg and Budapest.

It's a superb way to get you from point A to B while having all your food, transportation, lodging and comfort taken care of.

You can have a wonderful dinner in the dining lounge, enjoy some nightly entertainment with all inclusive drinks (if you buy the unlimited package for €150) and then drift happily off to sleep only to wake up at your next destination the following day.

The cruise got us to each city quickly and easily and we stayed in each port for enough time to see all the major sights.

It's really a good way for people to travel if they have never been to Europe before or if they like having all their transportation arranged.

You don't have to constantly pack and unpack, board trains or search for hotels when taking a river cruise. You are on a floating hotel that takes you directly to some of the most beautiful cities in Europe.

In Budapest, our ship docked right in front of the Four Seasons Hotel downtown.

That is prime real estate and we could never afford to stay in a such a central location. But on the Viking River Cruise, we had prime hotel space every night!

Read: 16 Things to do in Budapest

If you plan properly, you can have an authentic experience in Europe while witnessing the stunning views of the Danube from your river boat.

1. Plan our Own Tours and Shore Excursions

When our cruise was booked, we should have taken a good look at our itinerary and planned on what we wanted to see.

There are great day tour operators in Europe like Get Your Guide and Urban Adventures.

If we booked our time on a tour with them when we arrived in a city, we could have escaped the cruise crowds and taken some off the beaten path tours.

Most of the time we'd dock right in town, so it would have been easy to hook up with an outside tour company to discover the towns.

Or we could have easily jumped on a hop on hop off tour bus, taken one of the many free city walking tours that can be found all over Europe or simply explored on our own. The sky is the limit.

We made the mistake of getting on the tour bus with the fellow passengers rather than finding our own transportation.

In Vienna our ship was a five minute walk from the metro. We could have been downtown enjoying Mulled Wine in less than half an hour.

Instead we sat on the bus for over an hour listening to a tour guide ramble on about facts in the city that I really didn't care about.

For some reason the guides on the tour buses seemed to think that they have to talk every single second of the ride and never left one moment of silence.

I would have preferred a quieter ride with them chiming in only when there was something worth noting like a landmark or interesting piece of architecture.

3. Book Dinners Out in the Cities

Many times we didn't leave port until later at night so we could have eaten in town.

It's difficult to add the extra expense on when food is included on the ship, but to really get a feel for a city, it's nice to eat locally.

We could have easily eaten out more often and would have enjoyed ourselves much more. I wish that we had lunch on land and frequented more coffee shops.

Instead, we took the bus tours that got us back to the ship every time just in time for lunch or dinner.

If we traveled on our own, we would have been forced to explore and eat out more.

In Vienna we made a huge mistake. One of the things we were most looking forward to was going to a concert featuring compositions by Mozart and Strauss performed by a Viennese Orchestra.

There are people selling tickets all over the main square in Vienna but instead we went with the ship tour. It was not a good idea.

We joined all the other ships in port that night at an empty hall that needed to be big enough to house the large crowd that swarmed the city at once.

It was not the way we wanted to see a concert in Vienna.

We wanted to be in a historic venue in an ornate renaissance theatre imagining that this is where Mozart would have actually played.

We understand why we ended up in an auditorium-like setting. It would be difficult for any theatre to house hundreds of cruise passengers all at once, but if we were smarter we would have booked on our own and enjoyed the concert in a more intimate setting.

If we would have relaxed instead of being stressed out about the bad of time we were having, we would have figured all of this out sooner.

We knew from the first tour we took in Passau that we didn't like going on the tours prearranged by the cruise line.

If we would have taken a breath and said “How can we fix this” We would have realized that we could still have a good time.

We needed to see the positive instead of the negative. It wasn't until our final three days that we actually figured it out and finally enjoyed ourselves.

Many people enjoyed the Viking River complimentary tours very much. I heard passengers stating that the guides were very knowledgeable and that they learned a lot.

We suggest taking a ship tour when you first arrive to see what you think of them.

It's easy to book other tours a day or two in advance, so if you find that you don't like the prearranged tours, you can easily change your mind.

We would definitely give a European River Cruise another shot. The next time, we will plan better, take charge more and decide what we want to see at each stop at.

I know that it can be an amazing experience. We saw a lot of people having a great time.

But that is what travel is all about. You learn a little bit each time you go somewhere and try something new. That's why there are blogs like ours to help you not make the same mistakes that we made.

Top 10 Most Beautiful Things to do in Florence