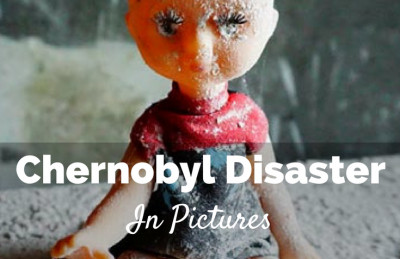 Chernobyl, Ukraine was the site of a terrible nuclear accident on April 26, 1986 when a reactor meltdown spewed radioactive material all over Europe.

A large area around Chernobyl was evacuated and is uninhabitable for thousands of years. This series of Chernobyl pictures show the disaster site 30 years later.

A large area around Chernobyl was evacuated and will remain uninhabitable for thousands of years. 30 years after the infamous accident it is possible to visit Chernobyl on a guided tour.

They say it is safe, but if you are too scared to go yourself, here are 22 Chernobyl pictures that will give you a glimpse into what Chernobyl looks like today.

Pictures of Pripyat – An Abandoned and Radioactive Town

About 36 hours after the accident at Chernobyl, the Soviets evacuated the nearby town of Pripyat, which at the time had a population of nearly 50,000.

The evacuees thought they would only be gone for a few days, and so they left almost everything behind.

Pripyat’s grocery store has been mostly destroyed, but shopping carts still sit near the entrance.

Today the Chernobyl Exclusion Zone extends for a 30 kilometer radius around the reactor. I visited as part of one of the heavily-controlled and sanctioned tours from Kiev, Ukraine.

But the area is so large that it is possible to sneak by the authorities (not advisable!).

In fact, an entire subculture of mostly young people in Kiev — called “stalkers” — are known to sneak into Chernobyl to explore the many abandoned buildings.

This, of course, is very dangerous. Just touching the various items in Chernobyl is a bad idea, as some are still highly radioactive.

Yet these stalkers are known to enter the abandoned buildings and move objects, like these dolls, to make Chernobyl pictures or videos that they hope will go viral on social media.

The stalkers aren’t the only ones in Chernobyl today.

Although the Soviets hunted down all animals in the area after the accident (to prevent the spread of radiation), wildlife has returned to the exclusion zone in force.

Many dogs, foxes, and even wolves freely roam the grounds of Chernobyl.

After a cleanup effort that was enormously expensive both in cost and its human toll, the Soviets covered the failed reactor in a sarcophagus to contain the radioactive material inside.

It was only designed to last 30 years, however, so a new sarcophagus is currently being installed.

Surprisingly, it is possible to get very close to the Chernobyl reactor (pictured above).

The radiation levels near the reactor are actually less than in other areas of the exclusion zone.

This is because they had to carefully clean up the area, since other reactors at the Chernobyl power plant continued in operation for almost fifteen years after the disaster.

30 years after the accident, day tours are now being offered from Kiev to the Chernobyl exclusion zone. And, yes, it is safe.

They say that the amount of radiation you’ll receive on a typical tour of Chernobyl is less than the average dose to a passenger on a flight from Kiev to Toronto.

The tours take visitors through many abandoned buildings, like the above gym or the below-swimming pool.

Perhaps the most haunting Chernobyl pictures of the tragedy can be found in the abandoned schools.

Here, a child’s shoes lie abandoned in a kindergarten while in the next room rusted-out bed frames are still filled with lonely toys and pillows.

Everyone was evacuated in the middle of their every day lives.

Nearby, an old football stadium is being reclaimed by the elements.

Perhaps the most iconic reminder of Pripyat town is its old amusement park, including a large Ferris wheel that stands frozen in time.

Though it is technically prohibited to enter them, many tour groups still allow you a peek inside. There you’ll find dusty time capsules of life in the Soviet Union.

Pianos, dishes, sewing manuals, books — household objects of every kind lay dormant in these buildings, eerie ghosts of a population whose lives were upended by the Chernobyl tragedy.

Want to visit yourself (and perhaps take your own Chernobyl pictures)? If you are in Kiev, it is fairly easy to book a tour through one of the government-sponsored agencies. Be sure to book ahead of time, though, as the authorities require advance notice of guests to Chernobyl.

The trip takes a full day and costs $100-$300 USD, depending on the company and demand.

We use Get Your Guide to book day tours aruond the world. It is easy to book last minute tours, and easy cancellation within 24 hours notice.

Full Day Exclusion Zone – This is a full-day tour with a guide. A small group tour includes transportation, stops at the Red Forest, sightseeing at Reactor 4, Pripyat Town and Paryshiv village. Also a lunch stop at the Power plant canteen $170USD. You can find more information here.

One Day Group Tour – a Full day tour from Kiev includes transportation and guide. A visit to the Chernobyl Nuclear Power Plant and Chernobyl city. See sights such as the museum, St. Elias Church, Pripyat, and the abandoned amusement park. Check out availability and prices here.

Apartment to Die for in Kiev