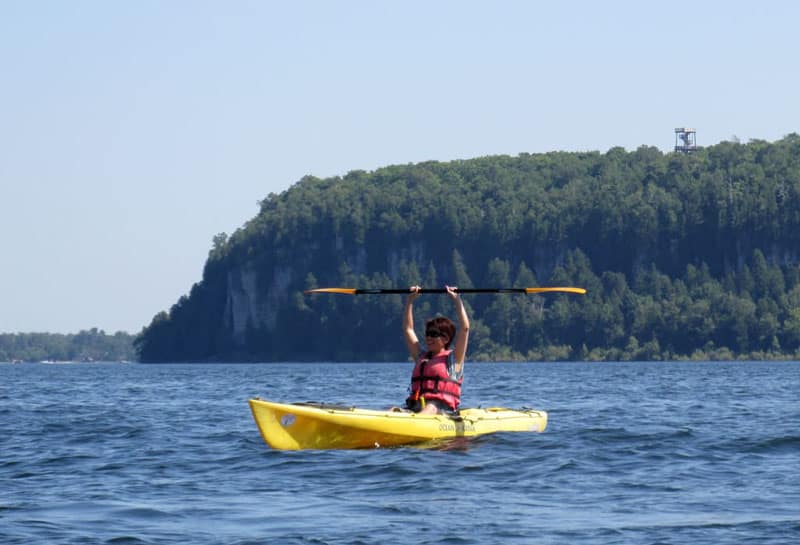 It may be best known as “America's Dairyland,” but I've discovered lots of additional things to do in Wisconsin, America‘s 23rd largest state!

Top 10 Things To Do in Wisconsin

While areas like Wisconsin Dells, and cities like Milwaukee and Green Bay, may be the places that come to mind when you think of this midwestern state, I'm going to tell you about 10 more great things I've enjoyed seeing and doing.

Appleton, Wisconsin, is such a welcoming city that Harry Houdini adopted it as his own–even though he was really born in Budapest, Hungary.

So, it's no surprise that the city returned the favor by honoring Houdini with exhibits covering his life and magic tricks.

The collection is housed in the History Museum at the Castle, a fascinating rough-hewn stone building of Norman Revival architecture originally built as a Masonic temple.

The best thing about the Appleton's Houdini room is that it's interactive, so you can give your own magic shows. Me, I levitated a table (with a little help from magic).

What happens at a DIY studio? Well, anybody can walk in off the street during business hours and create their own masterpiece–with a little help, at The Fire Art Studio in Appleton, Wisconsin.

I knew absolutely nothing about glass fusing before selecting it from my list of options (pottery, mosaics, and more options are available).

The glass fusing was a hands-on experience with owner, Freddie Haas, there to guide me.

From showing me how to safely use the tools to cut the glass, to tips on gluing the colored bits into a pattern, to “cooking” my work in the super-hot kiln and mailing it to me a week later, Freddie was an awesome teacher.

Note: The Fire Art Studio is Closed Mondays and is open until 8 every other night but Sunday

Okay, so this one sounds more like a tongue twister than something you can do on vacation, but it was a lot of fun! Picking the famous Montmorency tart cherries at Orchard Country Winery and Market in Fish Creek was a great introduction to all that Door County has to offer during its summer cherry season.

Equipped with a pail and enthusiasm, my morning in the orchard showed me why agritourism is gaining so much popularity.

Then, of course, there was the market visit with all the tastings from salsa to freshly baked cherry pie to the Lautenbach family's Cherry Blossom wine.

And if you're wondering, nope, I didn't win the cherry pit spit!

7. Watch Goats on the Roof

Along with a thriving cherry industry, Door County has a strong Scandinavian heritage that's celebrated with everything from food to summer events, like the Scandinavian Festival weekend on Washington Island or the Fyr Bal Festival in Ephraim.

Visitors flock to Al Johnson's Swedish Restaurant and Butik in Sister Bay for its great traditional food–and the opportunity to see their goats grazing on the sod roof of the restaurant.

As they're quick to tell you, the goats just graze up top during the day, but spend their nights on the ground, and their winters elsewhere too.

6. Dine at a Traditional Fish Boil

I don't know about you, but I'd never heard of a fish boil until I visited Wisconsin's Door County.

There, I learned a lot about this traditional Scandinavian meal–along with the history of Sturgeon Bay–from a local storyteller masquerading as Peter Rowley, a curmudgeon who'd lived in the area in the mid-1800s.

As Peter spins his tales, he gradually adds the ingredients for Rowley Bay Resort's first dinner sitting (the resort does two per evening).

Onions are first into the large cast iron pot of water simmering over the open fire. Peter tosses in red potatoes next, and finally, chunks of white fish.

The real excitement, though, comes when the oils from the boiling fish are burned off. Peter does this by pouring kerosene over the fire–not into the pot–and letting flames engulf it!

Within minutes, all the fish oils floating on top of the pot boil over from the excess heat, doing a much better job than I ever have on my kitchen stove!

Then, when the entertainment is done, guests all eat dinner. In addition to the fish boil, Rowleys Bay Resort provides a buffet with additional items on the menu. And the fish? Well, it was surprisingly tasty!

When I plan an itinerary, it has to have opportunities for exercise and discovering local history–High Cliff State Park has both.

It wasn't, however, always a park, but was once a small thriving “company town” built around a limestone quarry that operated from 1895 to 1956.

For me, the fascinating part of my visit was talking to Cindy Muller, the park naturalist whose grandparents had lived in town.

I thoroughly enjoyed her guided tour of the historic general store brick building, hearing stories about the original fixtures and artifacts.

The hike was scenic and a moderate workout, with lots of views of the limestone cliffs and the lake, the Indian mounds, ruins of the old quarry, and a climb to the top of the 40-foot observation tower.

The giant muskie at the Fresh Water Fishing Hall of Fame & Museum isn't from a dinosaur era, but it sure looks like it could be.

Made of fiberglass, concrete and steel, it's a giant that dominates the park–although there are plenty of other larger-than-life fish statues to see on the grounds too.

I found the whole complex impressive, much more than I'd ever anticipated seeing at a fishing museum.

Peninsula State Park, on Lake Michigan, provided me with the perfect opportunity to pretend I was an explorer with a one-mile paddle out to Horseshoe Island and a one-mile hike along a rustic path onshore.

A friend, Mirei, and I picked up our kayaks at Nicolet Beach Rentals, then set out across the bay.

I'd mostly done river kayaking before, so the wide–and deep–expanse of water seemed like an ocean to me, but I was up to the challenge.

We both agreed it was a perfect way to spend a Wisconsin afternoon.

Lumbering is hard work–but it's also a traditional skill that's alive and well in Hayward. I found Fred Scheer's Lumberjack Show not only great entertainment with its humorous cast of young lumberjacks, but also a fascinating recreation of history.

It's always amazing to me when a sport grows out of an industry, especially one that has changed dramatically with technology, creating a way to keep generations of skills still relevant.

With Wisconsin's long history of lumbering, it's no wonder that Hayward also became home to the Lumberjack World Championships.

If you have log rolling somewhere back in your own family's genetics, you can always join one of the weekly open log rolls to try your skills.

For me, it's all about the size of the splash I make when I fall, not how many turns the log will make!

Like log rolling, beer making is another traditional skill that's making its way back into popularity in Wisconsin.

There are numerous microbreweries popping up all over the state, but my favorite was the Appleton Beer Factory.

Visiting the Beer Factory puts you right in the middle of the business, since the huge “beer train” of shiny vats is in the beer hall where the tasting also happens.

I found the black ale, a malt roasted to near charcoal, had an amazing taste with a surprisingly smooth flavor.

Besides sampling the beer there, you can also have a meal, and what goes better with beer than pickled eggs with Tabasco (I enjoyed a crock of Reuben chowder too)!

So as you can see there are a lot of things to do in Wisconsin. It's filled with cultural experiences, history, adventure and beauty. Wisconsin is certainly worth putting on your next set of travel plans. road trip anyone?

About Linda Aksomitis:
This post was originally written by Linda Aksomitis of Guide2Travel or visit her personal website at Aksomitis.com. It has been updated by The Planet D to make more relevant and up to date content.

Find Linda on Twitter at @aksomitis or join her Writing and Publishing on the Web Facebook Community Page at Aksomitis.Classes

The Best Things to Do in Virginia Beach Off the Beach

7 Adventurous Things to Do in Salt Lake City