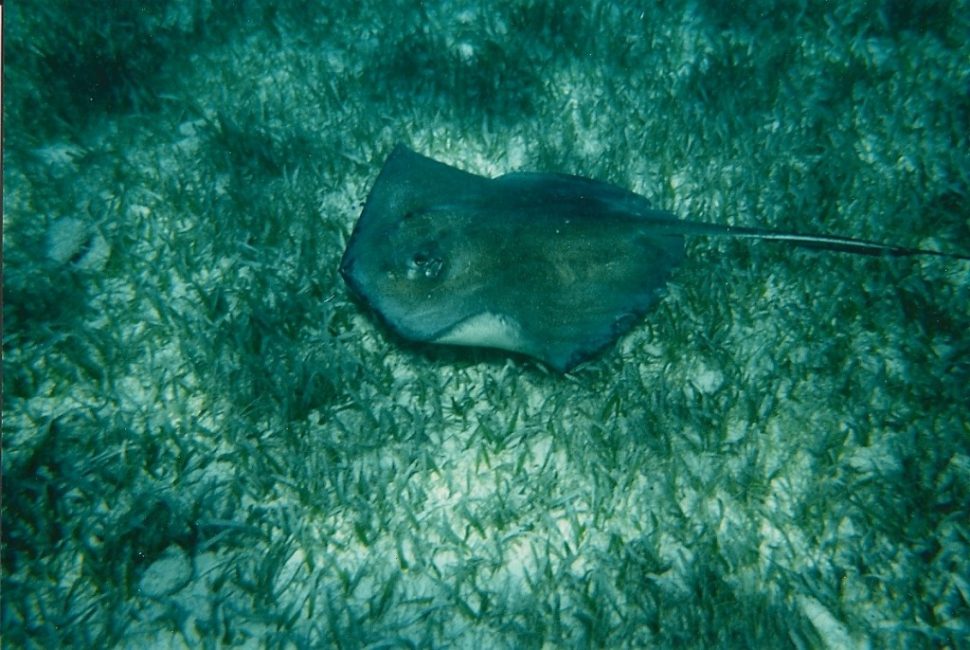 We have just arrived in Belize City on a bus from Mexico. Dave and I had decided to dive our way through Central America and are towing thousands of dollars of gear with us as we go. What were we thinking?

We started off our journey a dive resort in Cozumel, Mexico. It was such a great deal that it was actually cheaper to book a 1-week round trip all-inclusive vacation.

We ate the airfare home, and moved on from Cozumel. A one way ticket to Mexico would have been more money, can you believe it? So we enjoyed ourselves in Luxury for a week until moving on.

We bummed around the Yucatan Peninsula for a couple of weeks and then made our way to Belize. We had heard that Belize City was a very rough town and we were a little weary getting off the bus upon our arrival.

We started walking down the street and felt like a couple of targets, with our Rucksacks on our backs and towing along two huge pieces of luggage behind us. We could only have one thing it those bags and it had to be dive gear.

Getting Our Money's Worth

We decided to take our gear with us because for one thing we had spent a lot of money of the stuff and wanted to get our moneys worth and for another, we felt safer using our own regulators and BCD's.

In retrospect, we would just use the dive operators gear. Never again will we lug around that heavy cumbersome load. Our gear is for sale as we speak. Anyone interested? (just kidding-no seriously, anyone interested?)

We arrived in Belize City and walked along the streets looking for a cheap guest house feeling completely exposed when a man yells, “Look Up!” Freaked out we are taken aback and at first we worry that he was trying to distract us.

Is someone lurking behind us about to relieve us of our expensive cargo? Instead, we are treated to a view of thousands of birds flying overhead as he said, “welcome to my country, enjoy the beauty of Belize”.

Instantly we were put at ease and smiled knowing that we were going to love this country.

Whatever your vision of Central America is, check it at the door before entering beautiful and welcoming Belize. Many travel guides will tell you to “get out of Belize City and head for the islands.” It is too bad really, because they are causing people to miss out on meeting the very proud and helpful citizens of this vibrant town.

Cruise ships stop here regularly and whisk tourists off to Tikal in Guatemala, or to Ambergris Caye off of the coast. The port is well developed and you can spend time walking around the shops in the comfortable terminal. However, walking around the city is where you get the true Caribbean flare.

We settle in at our guest house on the water and walk the streets looking for a meal.

We really feel that we are in the heart of Latin America. Belize City is a mix Colonial buildings and Creole Culture. The streets are alive with energy. Music pumps from inside shops as smiling people great you speaking perfect English, only to turn to their companion and talk in rhythmic Creole.

We had read that we shouldn't walk around after dark, but we find ourselves out once the sun goes down and run into a group of men at the waterfront. We have a great conversation where they tell us about their lives and we all share a laugh that both of our currencies have the Queen of England on our bills.  People were friendly, kind and helpful and we would go back to Belize City in a heartbeat.

But it is time to move on and we catch a water taxi to Caye Caulker. For $10, we are transported to paradise. Far less crowded than its overdeveloped neighbor Ambergris Caye, this little island is a laid back chill stop for anyone looking for fun in the sun.

We walked along the sandy street to look for a beach front hotel and had little problem finding a beach front room for about $30. Only golf carts drive on the island, so no  worries about exhaust pollution or noise.

Located just 1 mile from the Belize Barrier Reef, it offers some of the best diving and snorkeling in the world. And we were ready to take advantage of one of Jacques Cousteus favorite diving destinations. But first we had to go for a swim at Shark Ray Alley.

We had heard of Juni in both Honduras and Guatemala and were told to hire him to take us out to Shark Ray Alley. A place on the reef where Eagle Rays, Manta Rays and Nurse Sharks hang out.

We didn't know if we would find him, but sure enough after just a few minutes of walking down the main street we chatted with him and signed up for a day of sailing and snorkeling for $25. I remember him telling us to not think of the marine life as fish burgers today and to just enjoy their company.

It was an amazing experience. We were a little worried to jump in the water with sharks and manta rays but Juni put us at ease; and to see how the fish reacted to him was a comfort. They were like obedient puppy's waiting for their master and they followed him around while he swam.

We followed the family of nurse sharks all along the reef and manta rays brushed up against us, we saw barracuda's, octopus, eagle rays, eels and lobsters.  I had never felt so relaxed in the water.  It was because of Juni.

He put us all at ease and even the Sharks seemed to love him.  He said “this my fish family”.  He had been swimming on this reef for 60 years and had a strong connection with its inhabitants. A marine preserve for the past 12 years, the coral and marine life is second to none in the world.

We loved our day so much, that we went back for another dose. Originally planning on diving, we felt that we had seen so much wildlife in these past two days that we were content to relax for the duration.

It was time to make our way to another Paradise beach in the country and we found ourselves in Placencia.  We just had to stay at Dave and Deb's Last Resort.

Feeling like we were staying in our own little paradise and imagining owning a place like this in the future. Dave and Deb's it has a good ring to it. I think we will call ours Dave and Deb's Hide Away if we ever are lucky enough to own our very own hotel.

We went for drinks at a bar and talked to the owners who were from Toronto. We had even worked with them on set. We thought they looked familiar.  They said to us that the Toronto film business paid for that bar.

How come we can't do that? They took us out and we went to a local bar and sang some Karaoke and drank so much, that I don't even know how we made it home. Ahh, The things you do in the Islands.

Our time had come to an end in Belize, but we will always remember the hospitality and its beauty. I had my best days ever in the water here and I hope that the reefs will be preserved for years to come.

Dive In: 9 Must Try Caribbean Watersports