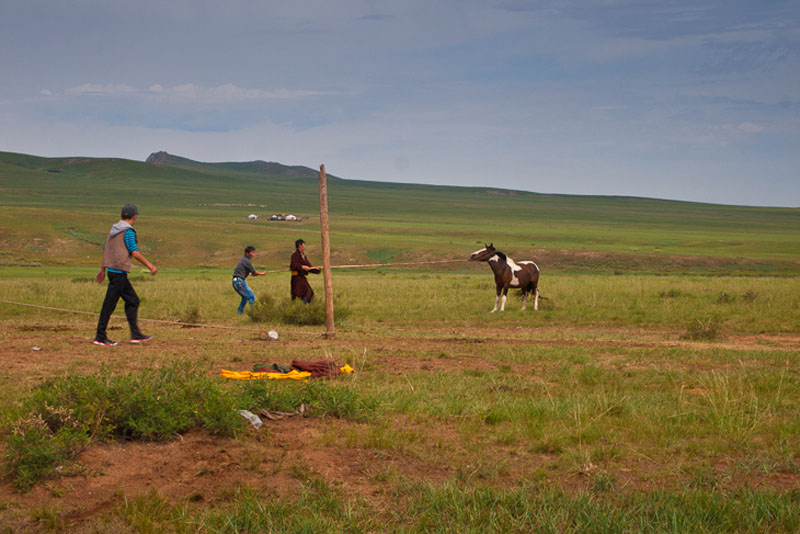 Who would have thought that a chance meeting in New York would lead us to this day in Mongolia? The Finish Line of the Mongol Rally! 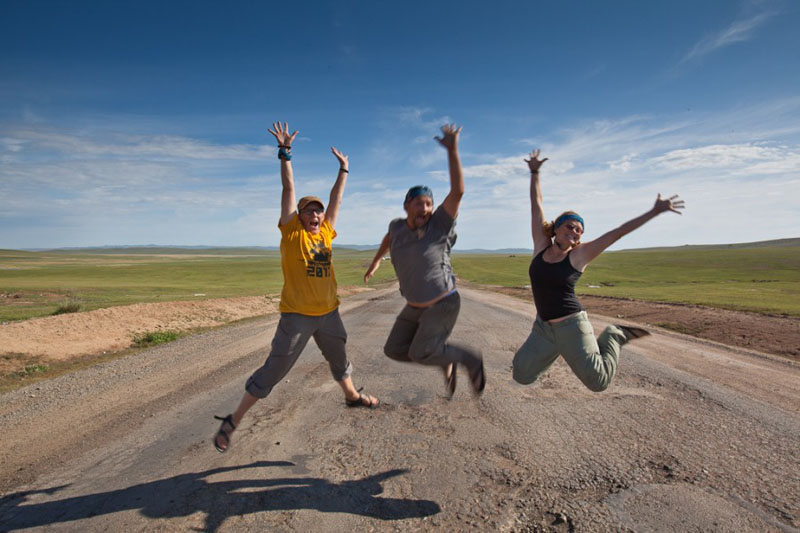 It seemed like a good idea at the time. Two well-known travel blogs come together for a media blitz where we drive a car to Mongolia for charity. Invite the MidLife Roadtripper himself and you've got the ultimate Road Trip known as The Mongol Rally where antics and mayhem ensue.

I must admit the car was much more comfortable with only three people and if I had one word of advice to anyone for their next rally, Don't overpack your car. Four People seemed like a good idea to split the costs, but three gave us a lot more clearance and comfort. 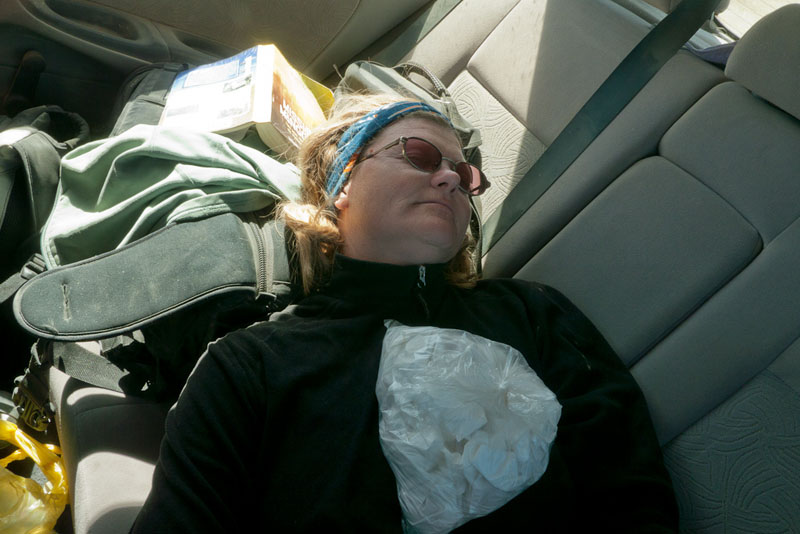 Driving in Mongolia was awesome.

We had a blast dodging potholes, meeting locals enjoying the scenery and trying to choose the best route from the labyrinth of roads ahead. As Dave put it “Driving in Mongolia is like playing a video game!” And we agreed. Between driving through rivers, up mountains and over scary bridges and weaving through everything from horses, yaks, camels and cows the adventure never ended once you got behind the wheel of the car. 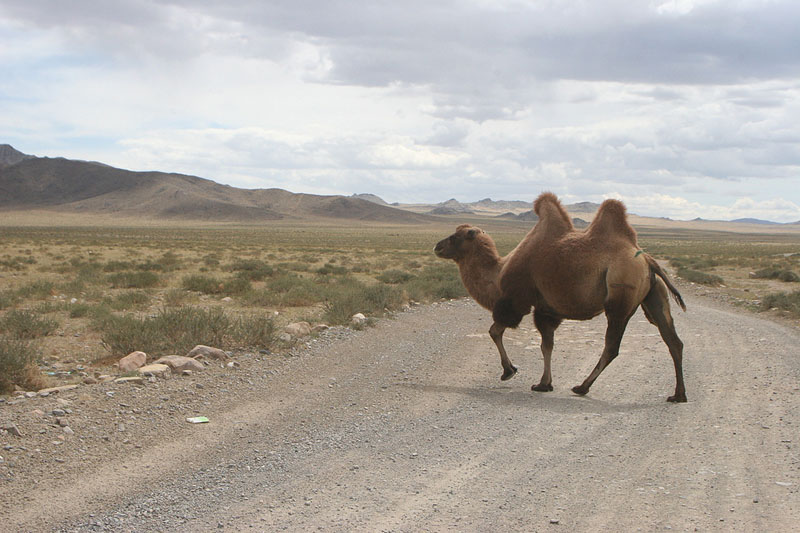 See: The Best Road Trips in the World

Dave was already a pro driver and I think that he'd make a great rally racer in the future. If we ever become rich, we'll take on the hobby of race car driving like so many wealthy movie stars do. 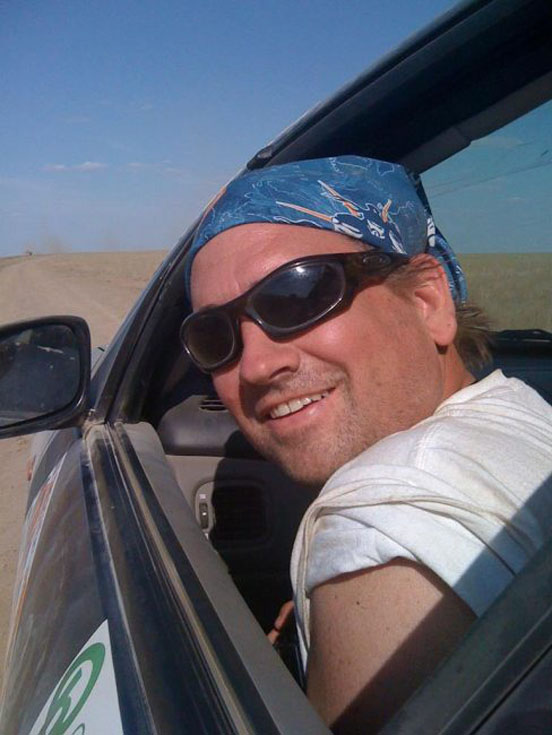 For the first time in 20 years, Dave actually likes my driving! He said that he enjoyed sitting in the passenger seat as I shifted gears with ease and calmly dodged obstacles. I have to say, I loved driving in Mongolia and I can't wait to do another driving adventure.

We had broken a shock the day earlier but after a phone call to my dad in Canada, we were assured that we would make it to Ulaanbaatar in one piece. We had paved roads all the way (even though their paving leaves something to be desired) and if we took it easy, we'd be sure to cross the finish line.

The car ran a bit bumpier than usual, but other than that, it was smooth sailing.

We took our time getting to the city as there were so many sights to see. 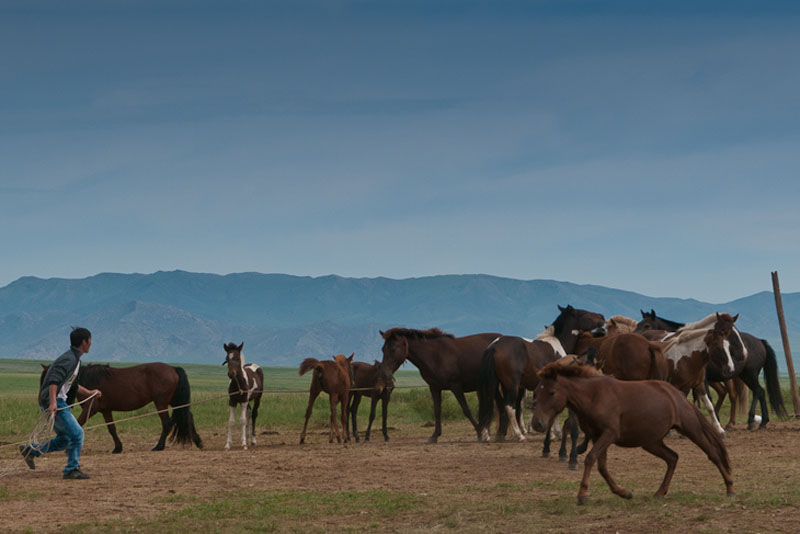 Mongols are the original horsemen and it is said that they have a mythical connection with horses. We happened upon a family on the side of the road rounding up their horses for feeding and milking time (a popular drink in Mongolia is fermented mares milk) and spent a half hour watching them work.

They used their motorbikes to round up the half wild horses and had a hard time catching the leaders, a spotted Appaloosa stallion. Once they got a hold of him, they put a bridle on him calmed him down, saddled him up and then started to ride. 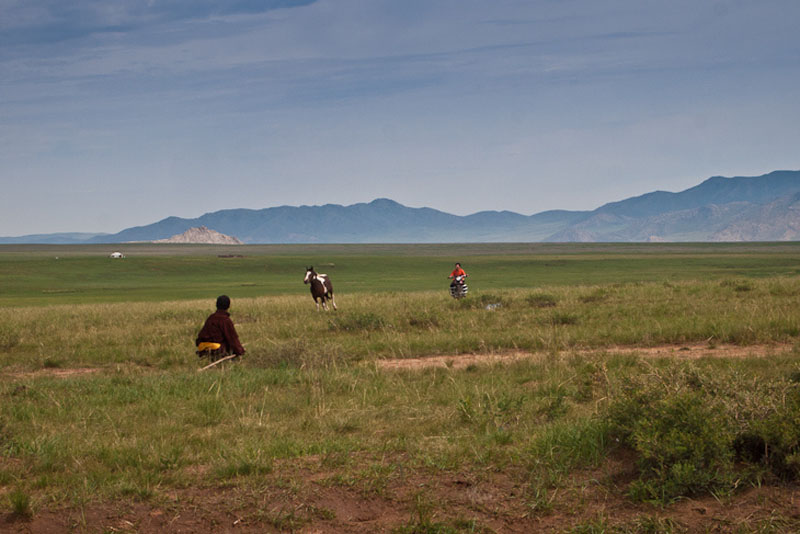 An Amazing Display of Horsemanship.

The horses in Mongolia are all still a bit wild, and run freely when not put to work and are still wild at heart. The man getting on the horse had to be a skilled equestrian to control this valiant creature. Once he had him calmed down though, he was butter in his hands and the horseman road out to the herd of horses in the distance to round them up with ease. Once their leader was reeled in, they all obeyed and followed their master diligently.

I couldn't help but think of my mom and dad who used to be skilled riders themselves and who love a great road trip. I kept coming back to how much they would love it here in Mongolia and that they should take part in the Mongol Rally next year. I'm putting it out there and setting up the challenge. Mom and Dad if you do the Mongol Rally, we'd do it again with you!

Wrapping up The Mongol Rally 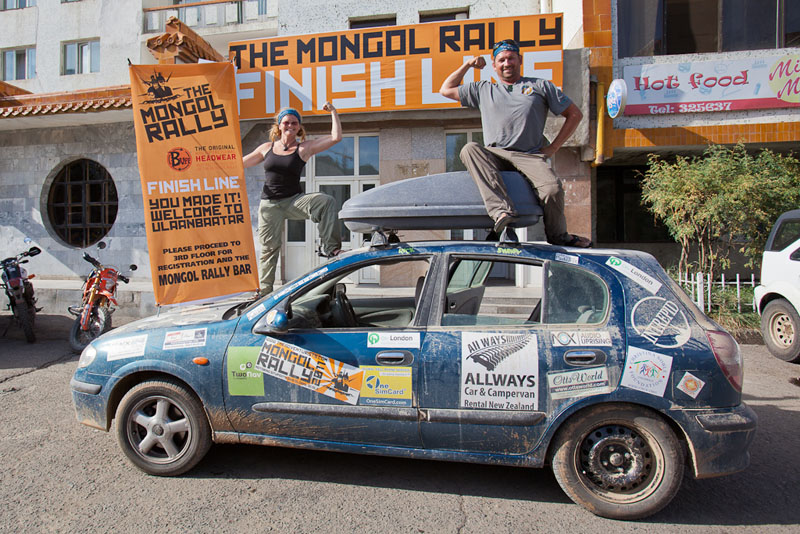 It was about 4:30 in the afternoon when we finally made it to Ulaanbaatar. It's streets are congested, confusing and in need of major repair. We were more worried about our shock once we reached the city than the past two days on the road!

Luckily we followed a van that waived us down on the side of the road. They said they were driving to the finish line and to follow them. We followed them discussing how we'd never be able to find our way by ourselves. We didn't have a proper map and it would have probably taken us hours just to find the main street, Peace Avenue.

The parking lot was a buzz with teams arriving. Saturdays are party days and everyone scrambled to make it for the second last party of the Mongol Rally. It was busy, exciting and we saw many of our friends that we met on the road. 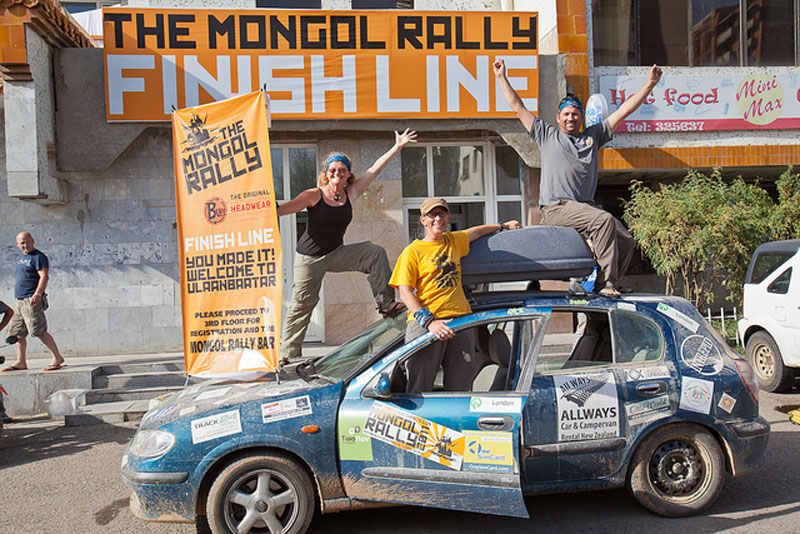 We couldn't' waste any time though, we had to snap our final pictures quickly before moving our car out of the way for the stream of vehicles coming in. After a quick hello, we ran off to find a place to stay for the night. We had exactly 2 hours to make it back to the party to see the awards and celebrations.

105 teams out of 300 had made it so far and tonight is going to be one epic celebration!

Mongolia Pictures from the Russian Border to the Gobi Desert