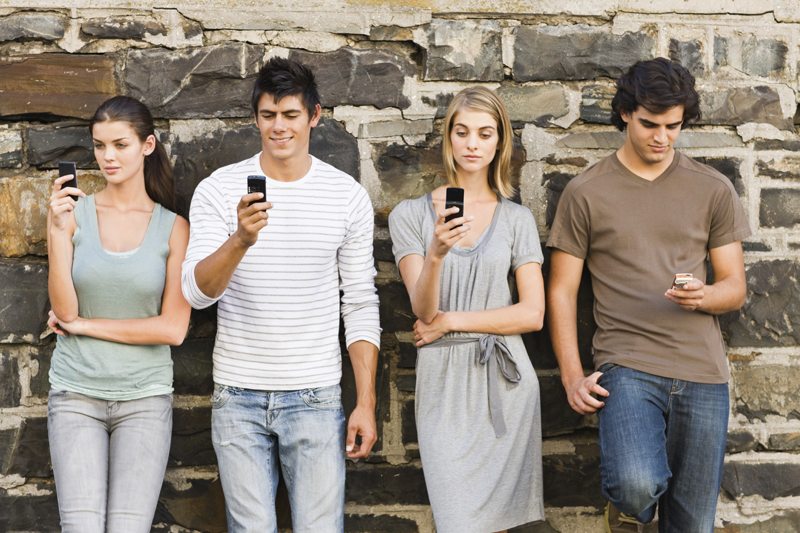 “Put that Smartphone down and talk to me!”

Yep! Those are the words I want to yell at almost everyone these days. And I mean everyone; friends and strangers alike.

I first noticed this feeling a few months ago. As I was sitting in Starbucks in Bangkok last summer, I was distracted by a group of teenage girls who walked in silently. Why was I distracted? Because they were not talking to one another.

As I looked up from my iPhone I noticed the girls sit down and continue to ignore one another while they had their noses buried in their smartphones.

I swear they proceeded to text each other. That's right, they were texting instead of talking.

I was flaberghasted! How could this generation choose rapid finger movements over human interaction?

What has the world come to. My mind was racing, could this possibly be the downfall of our civilization as we know it?

Beep! Beep! I was snapped out of my “Deep Thoughts” by the email notification on my iPhone.

As I looked down at that illuminated screen I realized I was not just witnessing this downfall, I was part of it.

Now perhaps using the phrase “downfall” is a little harsh but man it sure seems like it these days.

As “Social Interaction” becomes the new buzzphrase I can't help but think that there is some irony to that.

People spend more time with their nose in their smartphone, computer or iPad then they do talking to one another face to face.

How is that social?

Shouldn't we be laughing and joking with one another in person instead of attaching an LOL to the end of a text message?

Of course we should. I read a statistic the other day that the average teen fields 3400 text messages a month!! That is insane!

Humans need person to person contact, that is a fact.

Yet we have become lazy and instead of picking up the phone to have a conversation we are sending out tweets or BBM's.

I think I have become ultra sensitive to this by being a traveller. It never ceases to amaze me, that no matter where I go I can be connected.

I have been on the back of a Camel in the Thar desert in India while my guide is texting back and forth with his friend.

I have been to Mount Everst Base camp where you can check your email and at the bottom of the world in Antarctica where I have updated a facebook status.

I have been on tours through breathtaking scenery and stunning vistas only to see my traveling companions (and myself) insanely snap instagram photos to edit and upload to their followers.

And then spend the rest of their time staring at their screens to see how many people are paying attention to them instead of looking up from their phones and enjoying the moment.

I have sat at dinners where people spend more time comparing what someone said on their twitter feeds that they are both looking at rather than talking to each other about their day.

What Happened to Simplicity?

Not only has travel changed but life has changed.

Attention spans are getting shorter and the minute someone is left alone to their own devices or if there is a lull in the conversation.

Everyone instantly reaches for their phone to see what their friends ate for breakfast or what funny link they posted on Facebook.

People can't even go into a restaurant or coffee shop unless it has free wifi.

Gone are the days when someone went to the coffee shop to relax, read a book or have a conversation with friends.

No, now people pull out their laptops, sit on their Blackberry's or browse on their iPads and sit in silence laughing with people that they have never met.

Nobody takes any time to reflect, take a deep breath and enjoy their surroundings, they're too busy being hypnotized by dancing cats online.

Now I really cannot complain (but I will) as I am just as guilty as all of you reading this sitting in a coffe shop, but doesn't it seem like the world has turned into an episode of the Twilight Zone?

While technology has made much of travel easier, like how you can get recommendations from friends in an instant, find out the best place to eat at your fingertips, follow your google map back to your hotel or view photos of a destination in seconds, it also makes it harder to get away.

How many people go on vacation and never check their email?

Those of you who raised your hands I am sure you are in the minority.

The world has gotten smaller. But as the world shrinks your workload gets larger and even though you are on vacation you can't help but think of the backlog of emails that will be facing you when you get home.

So what do you do? Sneak a peek on the hotel computer or your smartphone at the beach.

I've seen it, hell I've done it. Does that make me a bad person? What does it say about us? Are we unable to relax?

As I write this article I have checked my email twice, posted a status update on Facebook and sent a photo out on Instagram.

All this and I haven't uttered a word to Deb as she is sitting right beside me.

The point of this post (if there is one) is that you don't have to change the way you travel, the way you live or the way you do business.

All I ask is that the next time you go to send that email, text or send a status update maybe a face to face meeting and some human interaction would serve you better.

After all, an LOL over a Social network is far less satisfying than talking about the day's events over a beer…for me at least.

What do you think? Has society gone crazy??