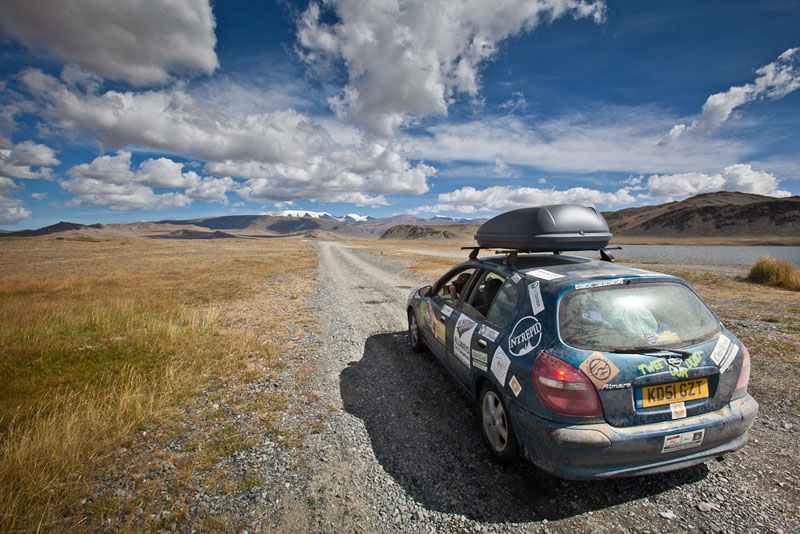 Entering Mongolia during the Mongol Rally was an exciting moment for us all.  We had survived police corruption in Kazakhstan. We had avoided paying bribes in Ukraine and we had made it safely through Russia when others had suffered from robberies, muggings, being drugged and scammed.

We got off lucky with only having to pay one $50 fine bribe to a police officer in Kazakhstan because we didn’t have car insurance since we entered the country on a Sunday and there wasn't anyone at the border to sell us any! (there was no talking our way out of that one)

It turned out to be worth the wait.

What Dave and I loved the most about Mongolia was driving in it. The roads were a lot of fun and we imagined that we were real rally car drivers speeding through our latest race.

I love navigating and followed my map and compass to get us to our next location. Things were a little more difficult than other countries though as the Mongolian map that Rick got online was 5-years old and many of the roads we were following weren’t even in existence anymore. We compared maps with other teams and realized that ours was complete crap, so soon we tossed it and started driving on blind faith.

We started following rudimentary route supplied by the Adventurists handbook and set our bearings on our compass to the direction of the next major town. They had a map stating the names of the major towns between the border and Ulaanbaatar and we knew that for the most part we'd be traveling South/East for the First half and North/East for the second half of the 16000 km journey. That's good enough for us! 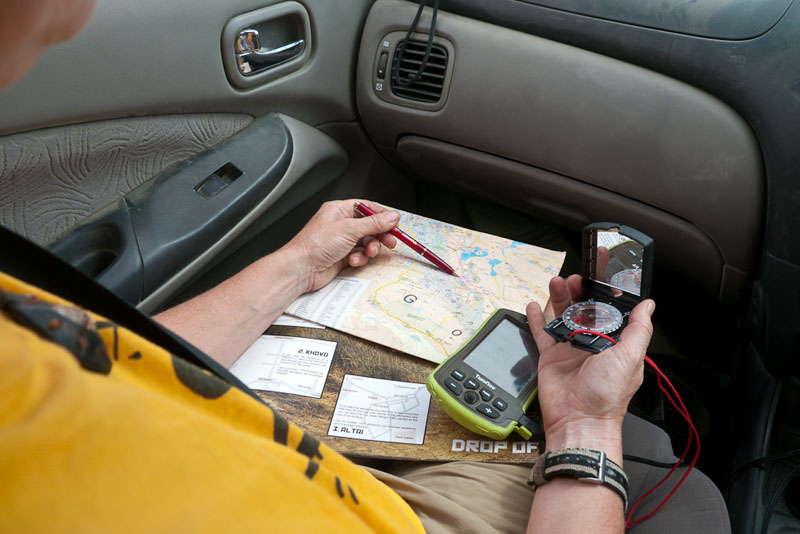 We had our TwoNav Aventura GPS by CompGPS that helped us along, but we didn’t cheat at all when it came to using a GPS. We didn’t plot our route ahead of time or have any co-ordinates programmed into the GPS. We did use it to measure how far we had traveled and we followed its state of the art compass. We also knew how cold we would be at night camping because we knew when we reached altitude. We found it to be an invaluable tool during our time on the Mongol Rally.

We kept the bearing set to East (the usual direction we were heading in) and measured the distances on our map between towns.  Roads may disappear and intertwine with one another, but as long as we kept on course, chances are we would eventually end up at the proper location.

The biggest obstacle was choosing the right route.

A person can easily get lead astray by the many tributaries leading from the main road. 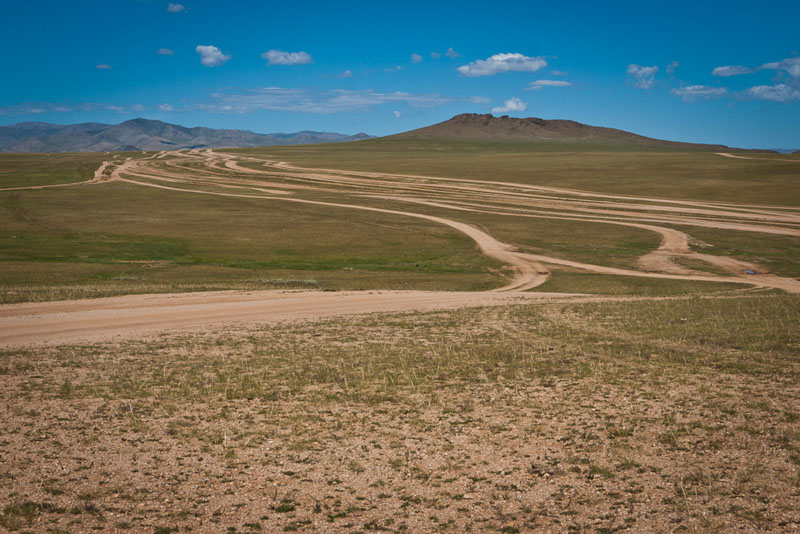 The main roads are usually so bad, that over time, people make their own paths. We have had up to 20 roads leading out from the main track to choose from and sometimes those tracks don’t follow the main route. They can lead to Ger camps or mountain settlements and you can find yourself miles off course if you are not careful.

If you don’t pay attention to your compass, you could find yourself heading due north when you should be driving due south!

While we second-guessed ourselves a few times, we rarely got lost and always eventually ended up where we wanted to be.

Locals were always friendly and helpful. 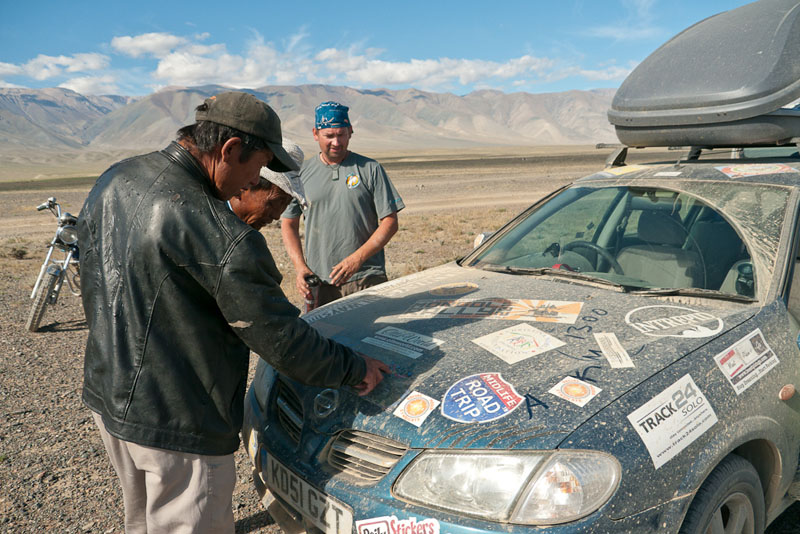 Once we figured out how to pronounce the city we were going to, we would jump out of our car, flag down a car and shout out the name of the next city. They would eagerly encourage us that yes indeed we were going in the right direction and we felt validated in knowing that we were not lost!

Driving is slow in Mongolia and distances pass slowly. If we didn’t have our km counter on the TwoNav we would have always be second guessing how far we had gone.

Mongolia is a large country and rumour has it that it only has 960 km of tarmac. After driving to Ulaanbaatar from the far reaches of Western Mongolia, we believe it! 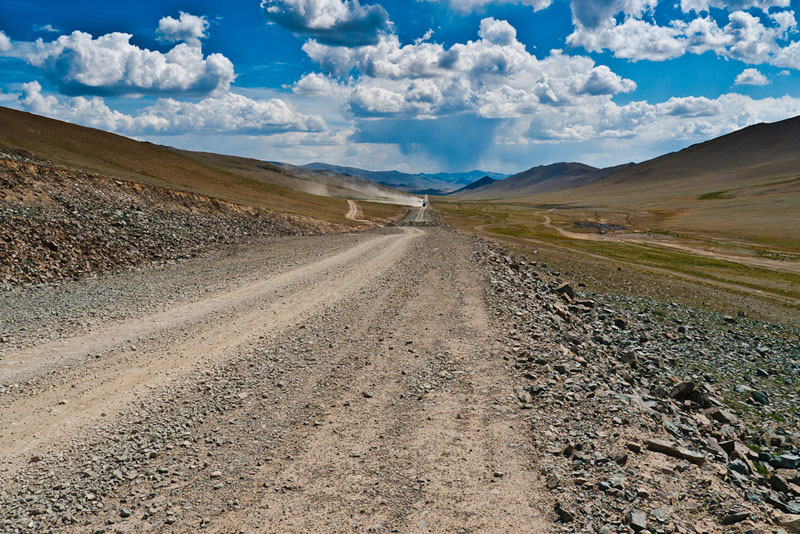 We barely spent any time on paved roads and were mostly driving through bumpy dirt paths made by drivers looking for a better route than the main gravel roads that were chewed up by overloaded transport trucks. Whenever we did come to pavement outside a town, it was a messy situation with more obstacles to dodge than the gravel and dirt roads.

Driving in Mongolia is like playing a video game. You drive along dodging giant potholes, sharp rocks, cows, sheep, camels and speeding transport trucks while trying to choose the best route with the least amount of corrugation.

The fastest one to the finish line gets a free brick of hard cheese and possibly some fermented mares milk!

The corrugation takes its toll on the body.

Having ridden a bicycle through Africa, we learned that the best way to deal with corrugated roads is to drive quickly over it. If you go too slow the car vibrates to the point of being unbearable. If you reach speed of 30 km per hour or so, the car seems to float over the tiny bumps with less vibration.

It still takes shakes you to the core though and whenever we stopped, I could still feel my body pulsating and continuing to shake for hours after the ride.

Between river crossing, rickety bridges, pot holes, corrugation, deep sand and rocky roads, we kept an average speed of about 25 km per hour. 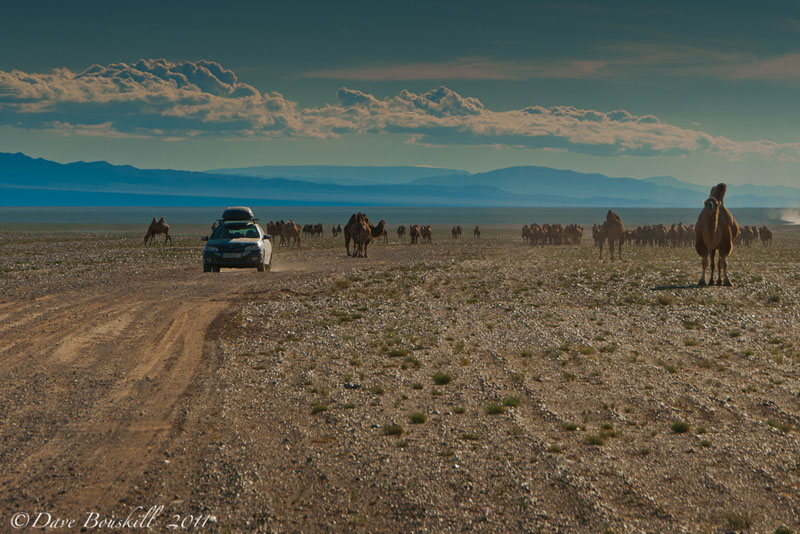 Traveling 200 km in one day was a very successful drive but I’m not going to lie. I looked forward to my turn to drive it was so much fun, I couldn’t wait to get back in the drivers seat.

We were all having so much fun that we started splitting up the driving to take turns more frequently. One person would drive in the morning and then we’d switch off in the afternoon.  It worked out much better that way too.

Mongolian driving takes a lot of concentration. If you take your eyes off the road for even a second, chances are you will run into a sharp rock or drop into a deep pothole. A couple of hours tops is all the mind can take before it needs a break from staring at the open road.

If you have ever dreamed of driving in Mongolia, we suggest you do it in the next couple of years. There's a lot of construction going on and we have a feeling that within 5 years time, there are going to be paved roads all the way from Russia to China!