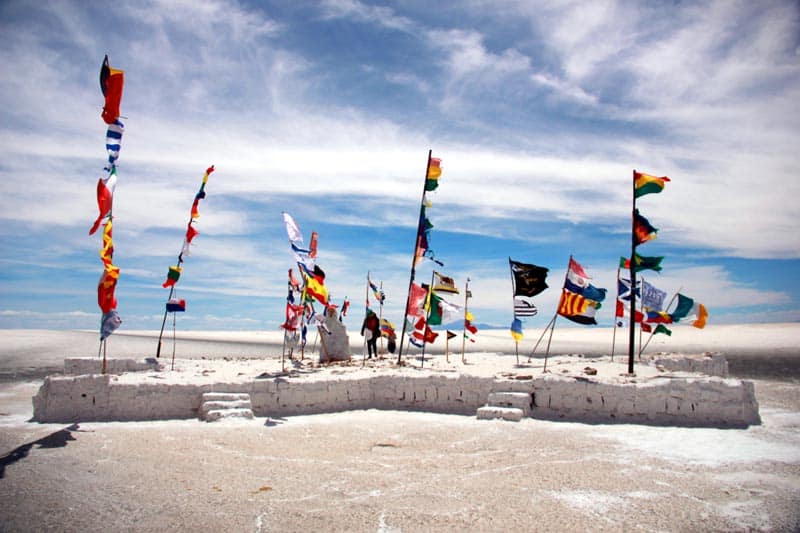 “You will love it!” were the words we had heard from other travelers every time we mentioned our plan to travel to the Bolivia Salt Flats.

They are the biggest salt flat in the world. As you might imagine those words raised our expectations sky-high and we couldn’t wait to see the white endless scenery.

Bolivia’s rough landscape requires an SUV and brings you to altitudes of 4,000 meters and higher.

It is the thin air, hot days and damn cold nights that makes life hard in the Andean Plateau.

Equipped with many big containers of drinking water and thick sleeping bags our driver put the SUV into first gear and an amazing 2.5-day adventure through barren surroundings began.

The tour started in Uyuni, a sandy and sleepy town, whose children’s playground was possibly the most colorful place.

By then we did not know that the adult’s playground was just behind the corner, Uyuni’s train cemetery.

Arriving there, everybody jumped out of the SUV and climbed up the giant wrecked old steam locomotives.

We felt a bit like being transferred back to Uyuni’s golden period when those trains carried minerals from the Salar de Uyuni to the Pacific Ocean.

How Do you Describe the Bolivia Salt Flats?

The sun burned from the sky and the reflections from the salt were so strong that it was impossible to open the eyes without sunglasses while looking over the massive salt desert.

Everybody was excited and as soon as the SUV stopped, we tore open the doors holding toys and Pringles cans in our hands.

The Uyuni Salt Flat is THE photo spot to play with proportions and perspectives, where people sit on potato chips cans, toy dinosaurs come to life chasing travelers and jumps over an SUV is a breeze.

The Salar de Uyuni attracts travelers from around the world.

Ever-since the salt flat played host to the world-famous Dakar Rally in 2014, it has gained even more attention amongst travelers.

The Salar de Uyuni is the world's largest salt flat and is located at a high altitude. Being  3,656 meters (10,000 feet) above sea level, there is a risk of altitude sickness if you don't take care to acclimate.

Have you ever seen an island that is NOT surrounded by water? Welcome to Isla del Pescado, the Fish Island!

The Salar de Uyuni has a few islands and we enjoyed an awesome view from the top of this one.

From up there, we got an impression of the true dimension of the salty landscape.

After leaving the salt flat we thought it could not get any better. But we were so wrong!

Since we visited during the dry season, our SUV produced a giant cloud of dust when we crossed the stunning moon-like landscape of Bolivia’s Andean Plateau.

This is how real adventures look like. This is where the SUV feels home.

In the Andean Plateau, at an altitude of about 4,000 meters, not only the air is breathtaking.

The chain of volcanoes and mountains along the horizon gave us the feeling of being far away from any civilization.

And for a second we thought we reached the “end of the world”.

These tracks might look like remains from centuries past but they are still in use and connect Bolivia with Chile.

The moon-like landscape surrounded us as we drove on the red and brown sand when unexpectedly, behind a hill, a beautiful lagoon appeared.

Hundreds, probably thousands of flamingos were wading through the shallow water in search of food.

It was such a contradiction to see an oasis of life in the middle of the barren scenery.

The Andean Plateau and its mysterious rock formations have been formed over millions of years through wind and sand.

And sometimes nature is very creative and forms rocks like the Arbol de Piedra, the Stone Tree.

Our guide told us before that we would get to see a lagoon more beautiful than the one we had seen before.

But we did not want to believe him as we could not imagine that it would be possible.

The silence was around us when we approached the Laguna Colorada, the Red Lagoon. Everything around us felt unreal.

Do you know how it feels when you see something and cannot believe it is real?

It was hard to believe that this lagoon, with its shades of yellow, black, white, red, brown and the blue sky above it, was not a canvas.

Now and then we saw these little pink spots again, flamingos that enjoyed the delicious alga which makes the water appear red.

It was almost sad to see that the last lagoon we visited, the beautiful Green Lagoon with the picturesque volcano in the background was void of flamingos.

As we learned this green type of algae was poisonous. Too bad, the water looked so inviting with those beautiful reflections on the surface.

The last morning of our trip was all about steam and sulfur.

It was a very special place our driver took us to watch the sunrise in the early morning.

We were surrounded by geysers and holes in the ground filled with boiling mud.

The cold air of the morning intensified the steam and the area looked like a mystic place.

At the end of our 3-day trip, we were exhausted. Exhausted because of all the incredible things we had seen.

It started with an endless white salt flat, continued with moon-like sandy and dry landscapes of volcanoes and mountains, and ended with the most colorful lagoons we had ever seen.

Every one of us needed some time to digest the past days.

There are many amazing places on our blue planet but the Salar de Uyuni and everything around it truly belongs to one of its most beautiful places!

Have you been to the Bolivia Salt Flats? What do you think? Is Bolivia’s Andean Plateau one of the most beautiful places in the world?

This article was originally written by Liane and Lars who have since stopped blogging, but we have kept it on ThePlanetD as it is a destination that is worth visiting.

Salar De Uyuni – All You Need to Know Before You Go

5 Things to do in Bolivia