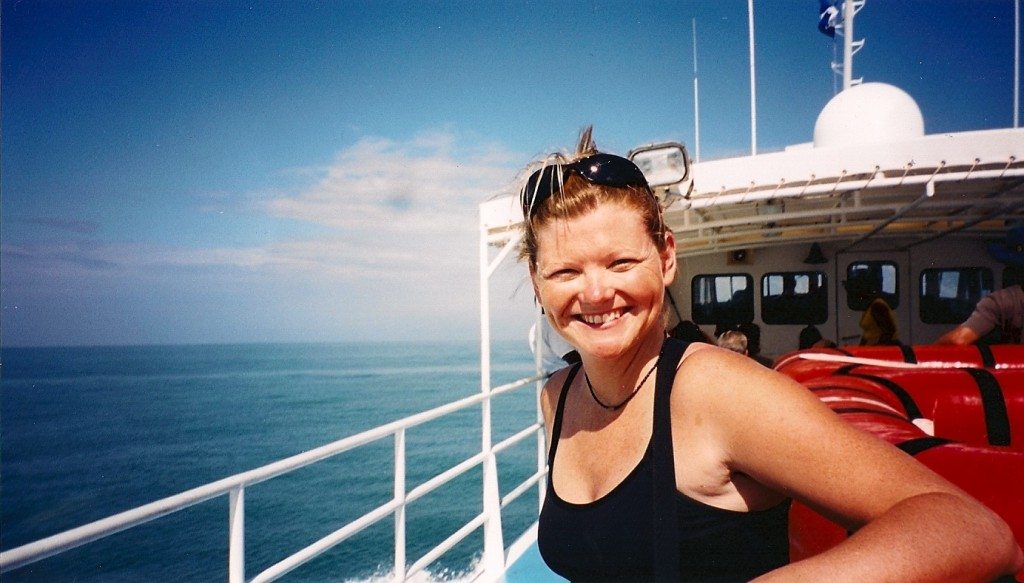 If you are looking for a great place to learn to dive that won’t break the bank. Utila Honduras is the place to go.

Dave and I had been diving for a year and we decided to go to Honduras to do our dive masters course.  We thought what a fantastic way to travel the world, teaching diving and hanging out on beautiful beaches for the rest of our lives.

Boats and Busses From Belize to Honduras, What an Ordeal

We booked a boat in Belize City to Puerto Cortes, Honduras. It was leaving at 9:00 am and we had a driver coming to get us at 6:30 for the hour and a half drive.  He ended up coming 45 minutes late and we had some delays due to construction.

We arrived at 10:30 an hour and a half late. It didn’t matter though the boat was still there. Actually, we waited for another 45 minutes until we left. More people arrived even later than us and nobody seemed to mind.

At first we found a place in the cabin below, but the sea was high that day my friend. I was starting to get seasick along with most of the other passengers, so I decided to move outside.

Dave stayed in and ate peanuts and drank orange crush with a businessman from the States.  He seemed to not feel a thing. I remember looking inside and he was laughing and eating. He was oblivious to the pending doom I was feeling.

The rest of us were on deck, throwing up in tandem.  Between the fumes from the exhaust and the swells going over the boat it was hard keep anything down.  The waves were huge we dropped into the sea surrounded by nothing but water. I was sure that we were going to capsize.

I literally had the headline go through my mind. ‘Two Canadians Lost at Sea in Belize’

We made it to Puerto Cortes in one piece however and we had a lot of time to get over our nausea. Because we were so late arriving, the customs office closed for the day and went home. It was only 1 in the afternoon.

Well, somebody had to go and get them because they had a boatload of tourists stuck on a boat and we couldn’t step foot in the country until we got our passports stamped.

It was an odd experience.  Puerto Cortes is the principal Port of Central America, and the channel was filled with giant cargo ships. The Chiquita Banana boat was parked beside us, and we sat in the heat waiting and waiting.  Locals gathered and watched us and children laughed at us.

We couldn’t get off the boat and they couldn’t come on. We just sat there looking at each other.  I gave a lady my needle and thread to fix her skirt.  I had just ripped my pants and was working on fixing them, and once people saw that I had a thread, it was passed around to do some repairs.  They sewed so quickly and perfectly compared to my crude job.

We baked in the heat and joked that we would have to turn around and go back to Belize.  That is when the Captain said, I am not going out there again today, the sea is too rough. We all laughed grateful that his skill and experience got us there safe and sound.

Finally the border patrol arrived. One man and one man only processed 50 people.  It was getting late in the day and we didn’t have much time to make our way across the island to catch our ferry to Utilla.

We were running late, so we raced to catch the express bus to La Ceiba.  We missed it of course, so it was onward to the other express bus to San Pedro Sula.  We made it!

I have to say, I love their idea of Express Bus. It means “I will still pick you up and drop people off at every stop, I just won’t come to a complete stop.”

In San Pedro Sula, we had to transfer.  We trekked four blocks, dive gear in tow, to the other bus stop to catch the new La Ceiba Express bus and luckily, we just made the last bus of the day.  Being in a rush when we bought our ticket, we were ripped off by 100 Lempira each. ($10)  That’s what happens when you are in a hurry.

All of our running and transferring didn’t help us though.  We finally made it to La Ceiba, but we were 6 hours behind schedule and almost out of money.  It was too late to go to a bank, so we found a place to stay and found a place to eat.  We didn’t have much cash on us, so all we could afford was a plate of fries.  Mmm, but they were the best fries we ever had.

Going to the ATM

The next day we made our way to the ATM. Armed guards stood at every bank. Armed guards stood everywhere for that matter.  One man told us (now I don’t know if it is true so don’t hold me to it.) that it is legal for a person to have 5 guns in Honduras.  Semi Automatics included.  All I know, is that I saw a lot of guns.

For some reason when traveling, I never worry about guns. They never really make me uncomfortable, except for that time in the Sudan.  A truck of guards drove in front of us as we cycled for km on end. They had their machine guns pointed right at us.  Not that they were going to shoot us, they had big smiles on their faces and they were waving.

They were just watching us cycle in the desert, probably wondering what kind of crazy person would do something like that. The guns were mounted on the truck so they had nowhere else to point them, but we were just a little worried that their finger might slip by mistake.

However, let’s get back to Honduras. I have actually become so used to guards at banks when I am traveling, that when they are not there, I feel a bit odd.

I think to myself, why is the guy with the machine gun not here to protect me?  So the guards in La Ceiba, made me feel good. If I was going to get mugged it wouldn’t be for at least a few blocks.

But, there I go on a tangent again.

So after two days of traveling, we caught the ferry to Utilla and made it to the island.  We found a great company to dive with and settled into Freddy’s Guesthouse.  We were now ready to relax for awhile.

No more carting along our cumbersome dive gear, no more running through the streets, no more waiting at border crossings or waiting for our ride to show up.  Nope, we were just going to sit back and chill in Utila.  Dive, read, drink some Salva Vida Beer and sleep in the hammock.

Ahh this is the life.

Airlifted from the Amazon, Our Worst Travel Fears Realized

The Ultimate 5 Dive Destinations in the World