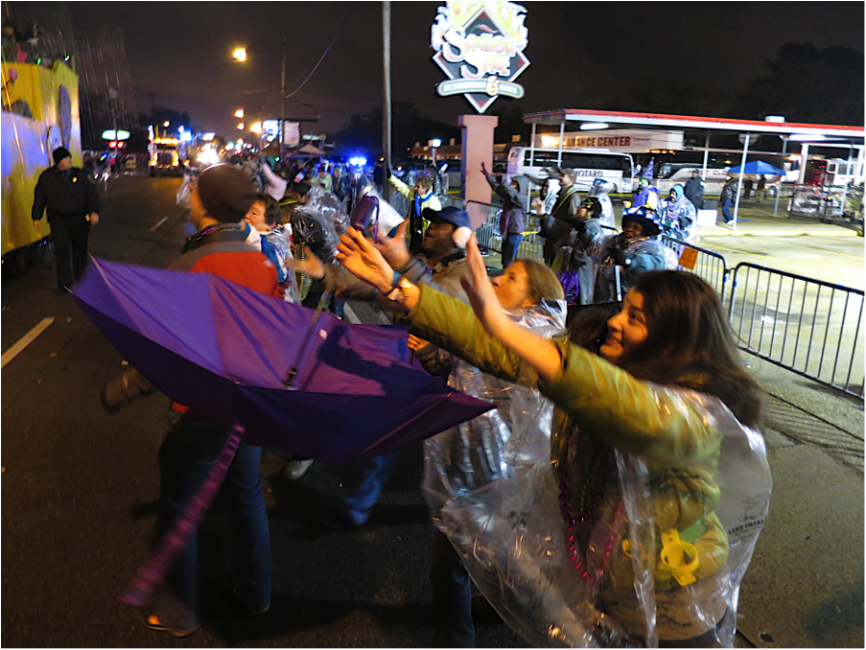 Our first Mardi Gras will definitely not be our last. This introduction to Mardi Gras turned out to be great fun!  The family-oriented celebration of Lake Charles in Southwest Louisiana proved to exceed our expectations.
Donning the traditional Mardi Gras colors of Gold, Purple, and Green we await in the queue for the start of the Children’s Parade. Oh yeah, we are going to be throwing beads in this parade…thousands of them. 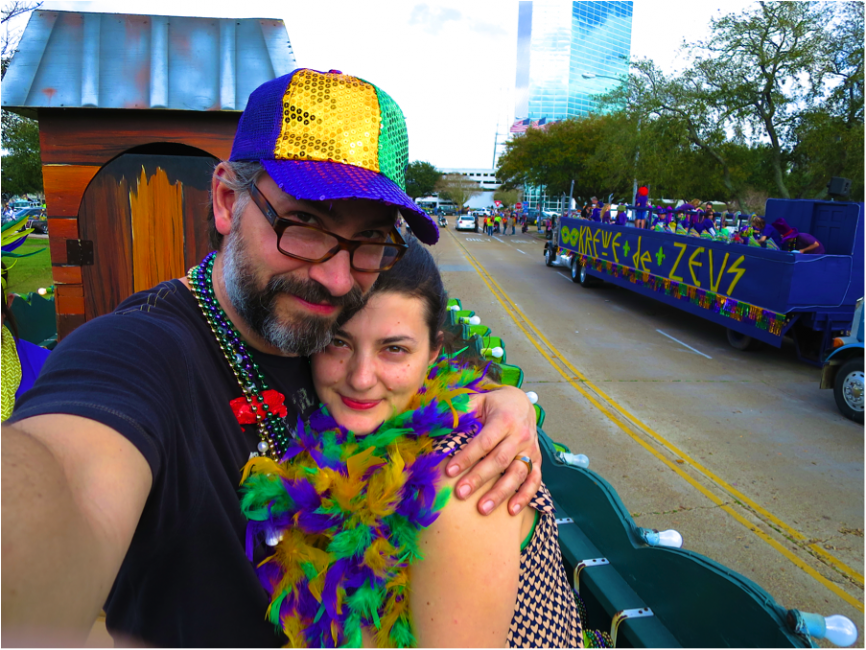 Mardi Gras Parade is about to Start – PlanetD Guest Bloggers, Dave and Bran

We were invited to ride in the lead float in the Children’s Parade on the Sunday leading up to Fat Tuesday. It was aboard this float, shared with mayor Randy Roach, that we were lucky enough to experience the spirit of Mardi Gras.

A joyous spirit personified through the simple act of throwing beads. It was nice to meet a mayor that is held in such high regard by his own community.  He would lead this parade with the first thrown beads of the day. 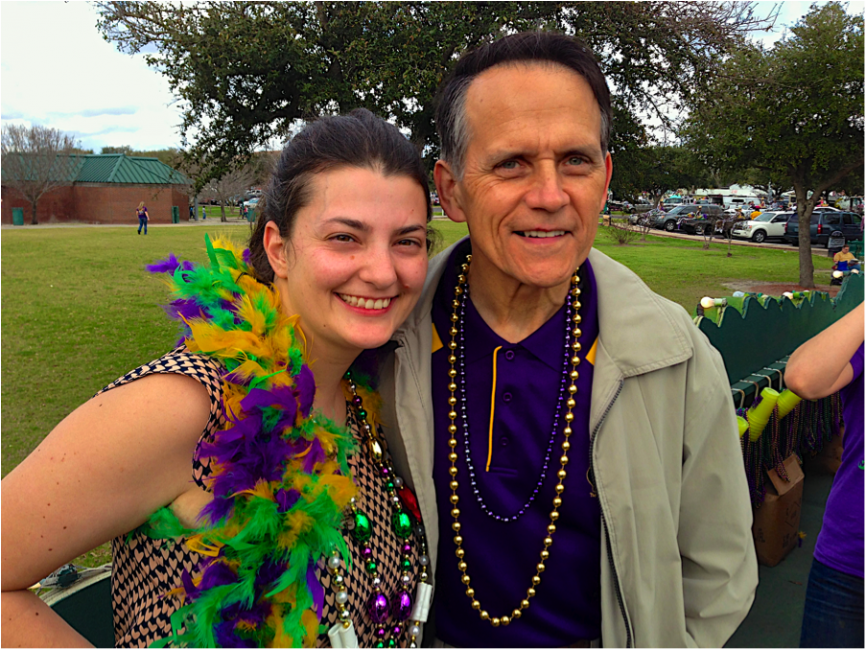 Usually Krewe members and invited guests would have the honor of casting beads. A Krewe is a club dedicated to the celebration of Mardi Gras. These Krewes will have their own floats designed to reflect their specific themes.

With all these varying Krewes there is still one common goal of dispensing thousands of beads. Over a hundred Krewes have made their floats ready for parade season. Krewe preparations for next year’s parades will begin on Ash Wednesday. For each of these Krewes it’s a year-long commitment. 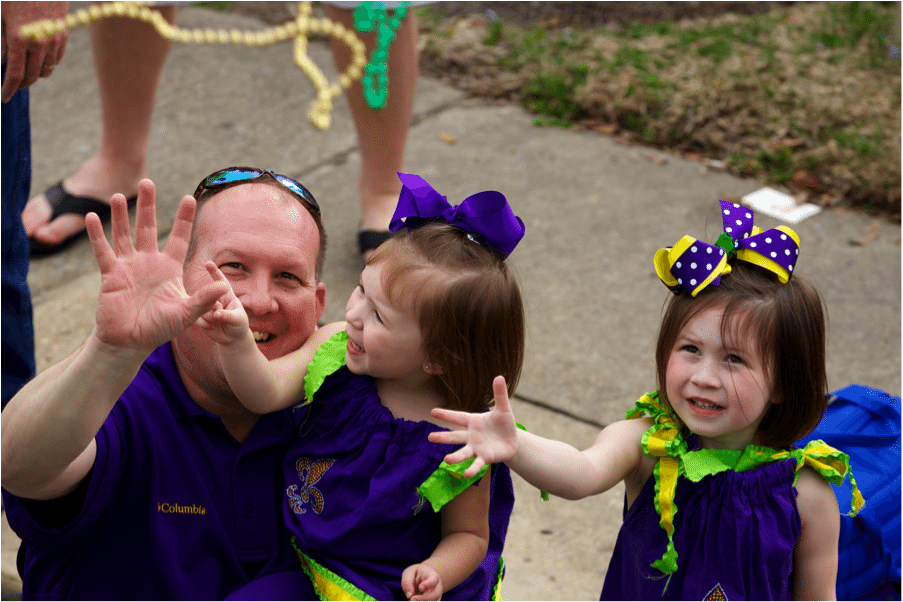 Differing from what our preconceived notions of what prompts bead throwing, the exchange of beads is prompted simply with a smile and an outstretched hand. Here in Lake Charles the weeks-long celebration of Mardi Gras is a great family event.

Families gather en mass and line the streets to share in the celebration. The Children’s chant’s of “Throw me something mister” could be heard all around our float.

Just like the phrase ‘trick or treat’, one is rewarded with treasure, but in this case beads are the reward. The beads themselves are just plastic costume jewelry, but the joy they bring is priceless. 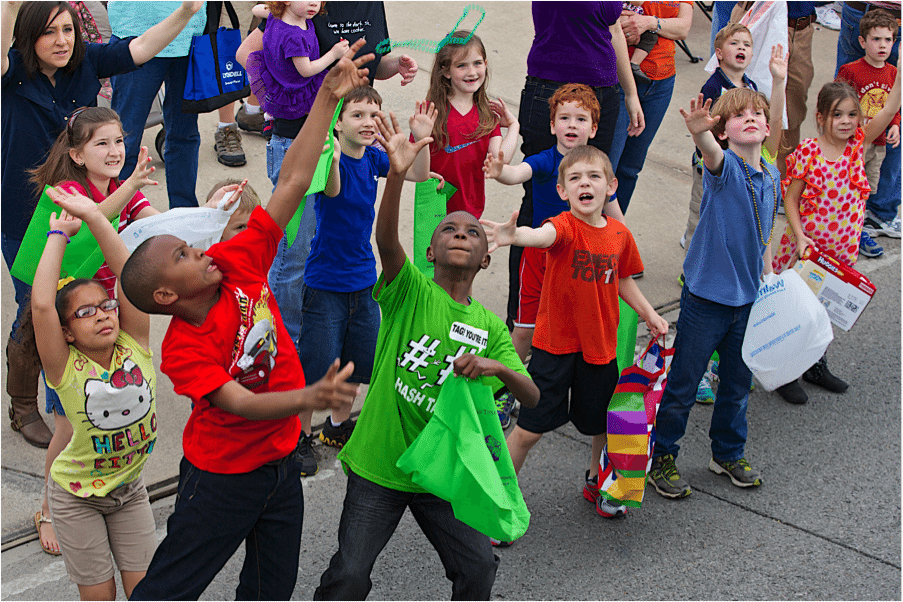 Plenty of Beads for Everyone

While taking pictures of people catching beads I took a moment and looked to Bran throwing the beads. I know Bran to be a happy person but something new was happening to her aboard this float. She couldn’t contain her joy that this new experience was bringing her.

I flashed several pictures so that maybe I could capture this feeling. Finally, I put down the camera and gathered some beads into my throwing hand. Suddenly, all eyes were on me! 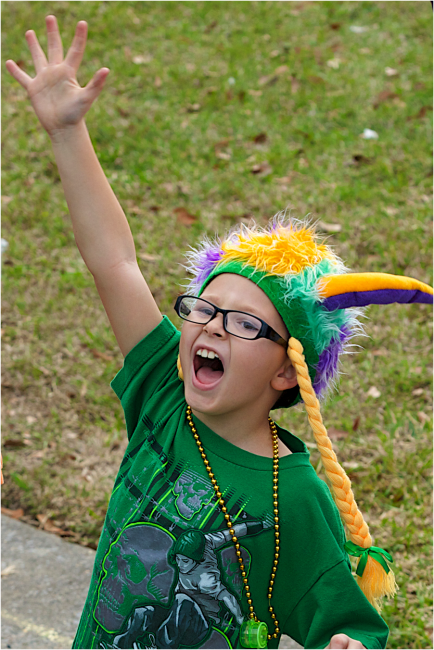 Throw me something mister!

Wow! In the minutes to come I was responsible for over a hundred beaming faces. What a rush! 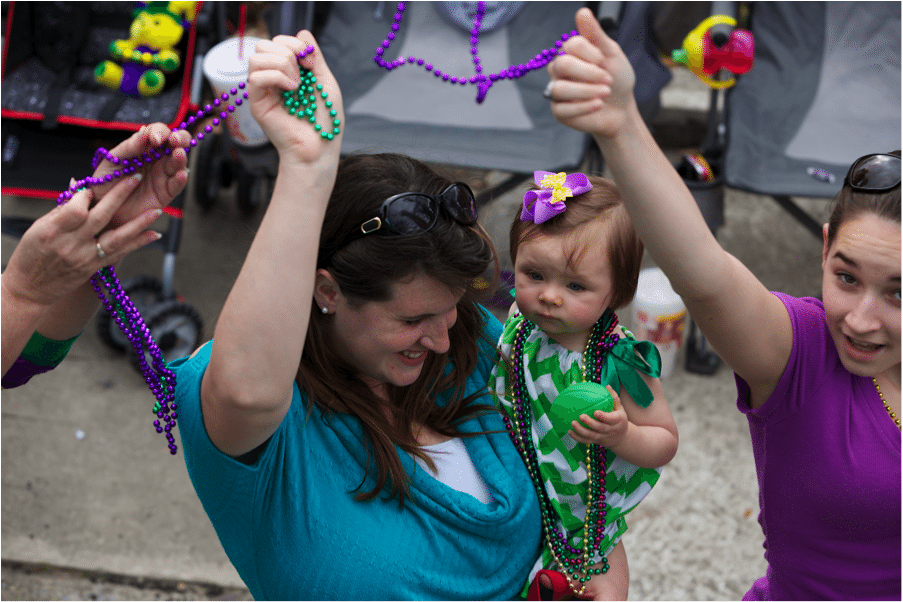 It quickly became apparent after throwing so many beads that these kids sure can catch! Honing their skills from a very young age it seems as though catching beads is great motivation for improving early coordination. There were many closed-eye catches.

As awkward as they appeared they were catches all the same. And that’s all that matters when securing the loot. 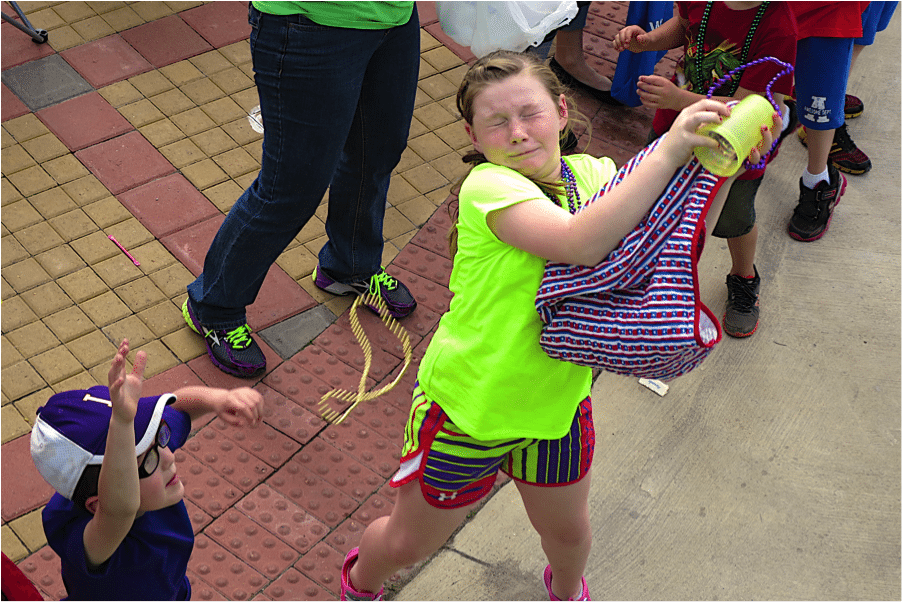 The crowd was immense and this parade route was lengthy: close to 2 hours in duration. For the many days leading up to Mardi Gras, Lake Charles will hold a multitude of parades.

A year’s worth of preparation and anticipation culminates in this short time, all of it ending with Fat Tuesday. All the celebrating, partying, parading, excessive cookouts all end the next morning, that morning being Ash Wednesday, the beginning of Lent. 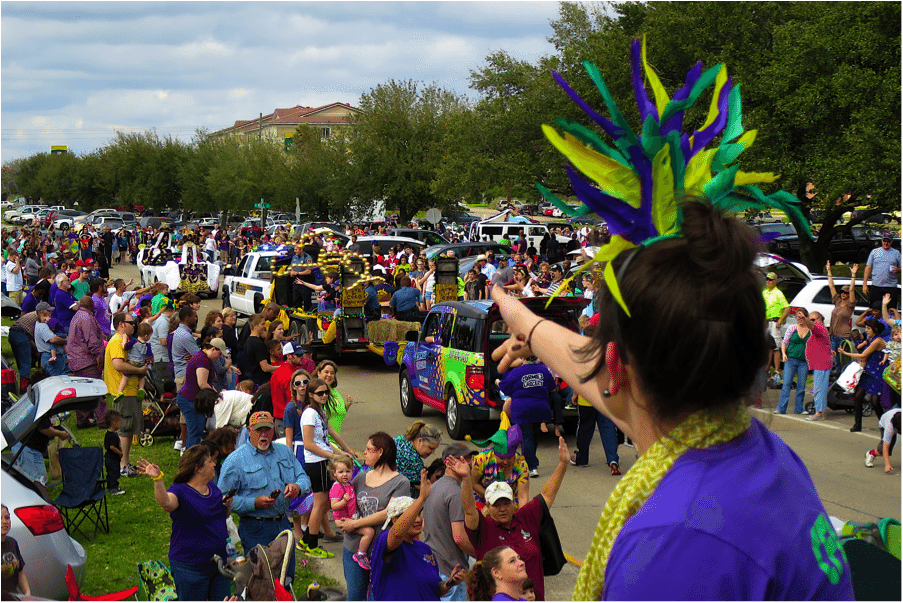 Huge crowds would line the streets

On the night of the finale, Krewe of Krewes' parade we found ourselves reversing roles and now experiencing this celebration from street level. Amongst our friendly celebrators we vied for the attention of the bead-casters, hoping that we might catch their thrown booty: Beads of varying size and color. Again a mere smile and outstretched hand would inspire some well-thrown treasure.

Your umbrella is upside down Bran!

That expression of joy would return here on this street. It would return to overwhelm Bran and myself once again. Now the floats would pass by with us on the receiving end of this celebrated bead exchange. Unfortunately freezing rain greeted us on the morn of Mardi Gras.

There were some road closures early in the day, and the rain would continue into the evening. We put on brave faces and rain ponchos to greet the generous floats that would soon arrive.

Our umbrellas proved to be most helpful, but in an unconventional way. Holding them upside down made them excellent catching baskets! Clearly catching beads is a more important use of umbrellas on this rainy night. 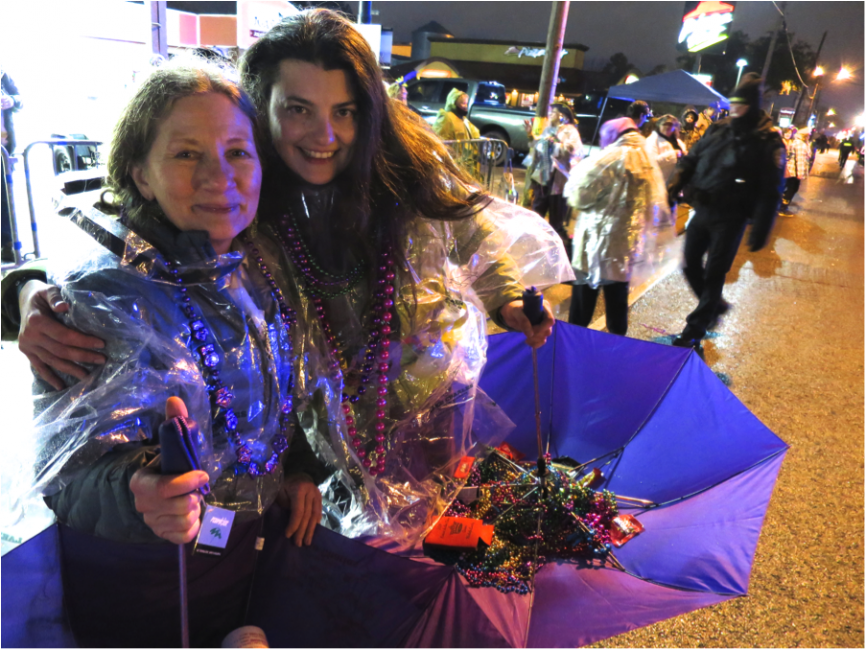 Glenda Winders and Bran are naturals at bead catching

The freezing rain would taunt us in futility. There was no way the rain was going to own this night. Instead the reign of kings of past and present Mardi Gras’ would prevail, and the raining of beads would go on undeterred.

Now we could celebrate Mardi Gras evening properly, and heavily adorned with the day's treasure. From our first ever float ride to our last evening in Lake Charles we owe this great experience to the Lake Charles community that embraced us with open and outstretched arms.

Thank you Lake Charles in Southwest Louisiana for introducing us to our first Mardi Gras! Merci Beaucoup!

By Bran Pavlovic and David Hill

To Read more of Bran and Dave's Experience at Mardi Gras, see 6 Things to do in Lake Charles

Special thanks to Lake Charles of Southwest Louisiana Convention & Visitors Bureau.  For more information on planning your #VisitLakeCharles adventure check them out on: