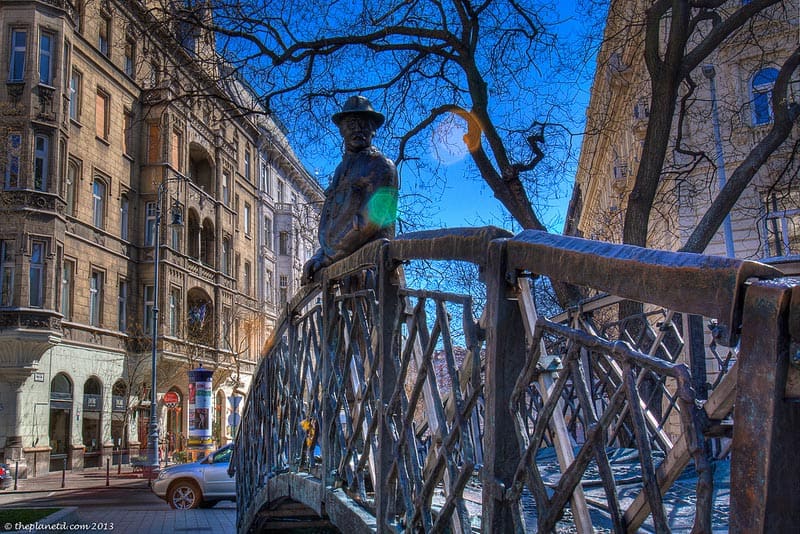 After WW2 in 1949, Hungary was declared a people’s republic and was ruled by communism. The iron curtain fell in 1989 but when you tour Budapest, you will see that there are reminders of the Communist regime scattered throughout the city today.

The most noteworthy monument is to Imre Nagy.

This statue of a man standing on a bridge looking over to the Parliament Buildings longing for freedom attracts crowds each day on walking tours to learn about the city's communist past.

He led the failed Hungarian Revolution of 1956 and was executed for Treason two years later. This monument symbolizes the difficult road to freedom.

One of the few remaining Soviet Monuments is Liberty Statue on Gellert Hill. This statue was originally erected to honour the soviets who sacrificed themselves to free Hungary from the Nazis occupation.
As we all know, that liberation came with a price and the soviets ended up locking out the Western world.
The statue was damaged in the 1956 Hungarian Revolution and in 1989 after the fall of communism, the statue was kept to honour all those who gave the ultimate sacrifice for Hungary.
An inscription in the statue states: To the memory of those all who sacrificed their lives for the independence, freedom, and prosperity of Hungary.

You can find another communist monument downtown Budapest at Liberty Square. This Russian monument honours the soldiers of the Red Army who died during the liberation Budapest from the Nazis.
It is ironically located directly across from the US embassy and a statue of Ronald Reagen stands on the other side of it.
Reagan played a key roll in putting an end to communism in the Soviet Union.

Hanging out with Ronald Reagan

There are many monuments in this area from the Imir Nagy statue to the eerie abandoned MTV building.
It's not the MTV Building that we know and used to love for their music videos. No, This MTV was the state run television station pumping out daily propaganda.
A luxury hotel chain from Canada has apparently bought up this beautiful building, but has left it standing empty since 2005.

A lot has changed since the days of communism.

Where once it would be unthinkable to even go into a persons house, you can now rent apartments and experience first hand how to live like a local.

We stayed in an apartment owned by a very cool gal name Roberta who looked like Audrey Hepburn. She rents out her funky apartment to people passing through.

Located in the heart of city, close to the river, we were walking distance to all the major attractions. It's cool to stay in an apartment, because you have the chance to get to know the locals. We met Roberta at one of the ruin bars in town for a drink.

What are Ruin Bars

Ruin Bars are a popular spot that came out of the fall of communism. These are trendy hipster pubs that are decorated with retro furniture and have a very cool vibe.

Budapest is in a major transition right now and an Interesting part of traveling there is that you can see a contrast between the communist era and the modern day society of today.

Communism is very much a part of the conversation in Budapest. People that are the same age as Dave and I remember growing up during the regime.

It has been slower to develop than other communist cities due to lack of funding, but this has allowed it to stave off the dreaded gentrification that is affecting so many cities today.

It won't be long until the West invades though, even now you will find McDonalds and Starbucks. As a matter a fact, Budapest was actually the first city in the Eastern block to open a McDonalds.

They had a more relaxed form of communism than other countries, giving it the nickname Goulash Communism. They enjoyed a certain freedom and amenities that weren't available to other countries in the Eastern Block.

You can take a walking tour in the downtown centre or do as we did an try 3-hour driving Trabant tour through the streets of Budapest.

Known as “the Paper Jaguar” the Trabant was popular during the communist era. Built in East Germany, it was cheap, it was compact, yet large enough to cram a family in with luggage and it was fast.

It's two stroke engine makes this thing sound like a tank, but it's fun to drive around in and all the locals will give you a big smile and wave as you pass.

16 of the Best Things to do in Budapest